A day of driving

This morning we took our time--went for a leisurely bike ride around the campground--it's such a pretty place and we weren't in any hurry to take off, having decided that we didn't want to drive the whole way to Big Bend National Park in one day from where we were.  So we rode along the river, out into this big field/pasture, with some great long range views of the high cliffs bordering the river, wished for our grandson to be with us when we went to the playground, and chatted with the owners.  We were at the Lazy L & L RV park in New Braunfels, TX, and learned that the current owners are the third generation of the family to own and run the park.  They were very nice, and we saw online that on Valentine's Day they hosted a big BBQ for all the folks who were staying there at the time--very special.

Drove to Boerne, TX to pick up I-10 and on the way through town just happened to notice a sign for a knitting store/toy shop, with this most unique sculpture garden beside it.  Lots of great big metal sculptures, some for sale, some not, but a very unique and interesting outdoor exhibit.  Alas, the knitting  store was not open today and we were really disappointed, because it looked so interesting--called The Ewe and Eye Shoppe!  And they advertised a collection of Russian Santas in the toy side of the store, so there would have been something for both Mrs. Claus and Santa, but 'twas not to be today.

So we had our lunch under a big shade tree alongside the sculpture garden and then climbed on I-10 for the long trek across the state.  Read online that at 880 miles, I-10 is the longest stretch in one state of the interstate system in the country, indeed in all of north america, having just edged out a highway in Canada.  Turned out it was much easier than we had anticipated, and not nearly as boring--must apologize to my good friend and Texas native from my men's group back home, Tom, for my misguided preconception that Texas is just a state to drive across.  There is indeed quite a lot to see and do here, and we've really enjoyed our time in the Lone Star State--and we're not done yet!  Talk about contrasts--wow!  Having been along the Gulf Coast for a while, and then in the Hill Country for a couple of days, we descended onto the valley floor of the Trans-Pecos Region, where for miles you could see tons of mesas on either side of the highway, stretching into the horizon.  Many of them had windmill farms atop them, turning the gusty winds into energy.  And we crossed so many totally dry riverbeds, but which obviously can change in a heartbeat, as we saw many warnings about potential floods over the roadway.  We made it to Ft. Stockton by suppertime, so we'll only have a couple hours driving time tomorrow to get to Big Bend Nat. Park.  Quite a contrast in our campground last night and tonight--from the cool shade by the banks of the Guadalupe River to a flat, rather dusty, and hot open campground--but it's always interesting to see different places.  This is the first time we've had to turn on the air conditioner, but I suspect we'll be doing that more often as we go along!  Anyway, we're really looking forward to our time in Big Bend, since we've heard so much about it and there sounds like quite a lot to do.

Today's pics:
Had not seen a pink RV until today--wait, I take that back.  When I was practicing law I had occasion to represent Loretta Lynn in a dispute with the maker of her tour bus, and when I went to Nashville to inspect it, the man at the lot showed me Dolly Parton's tour bus, which was even pinker than this one, though I suppose it's a stretch to call her tourbus and RV! LOL!  Anyway, we talked to the owner of this rig, as it seemed to us to be quite unique--the chassis was built in Quebec, but the rest of the construction was done in the US.  He invited us to come by later to see the inside but we were heading out. 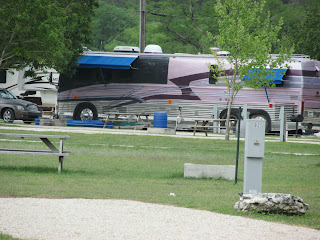 This shot was taken in this big field, looking back across the campground, and the river is down behind that row of trees beside the RVs you see toward the bottom of the shot. 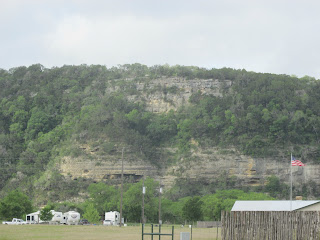 Riding all through this field 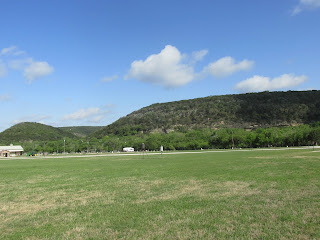 Entrance to the playground--wishing we had our little devil with us to enjoy it! 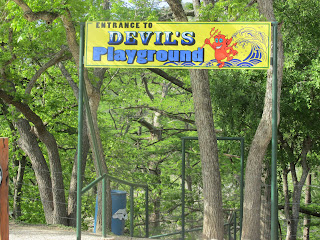 From the playground, some steps down to the river which is a great place to throw rocks into the water, and off to the left is a beautiful walking path along the riverbank 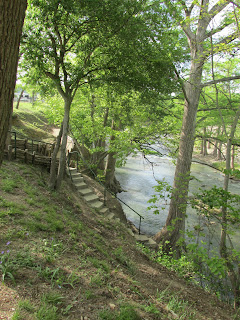 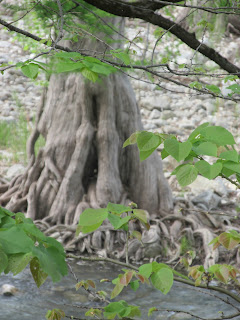 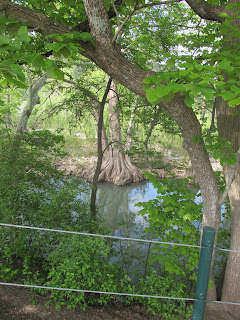 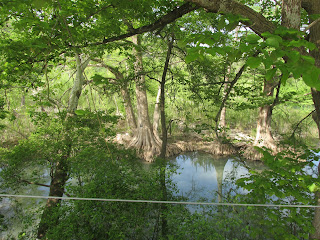 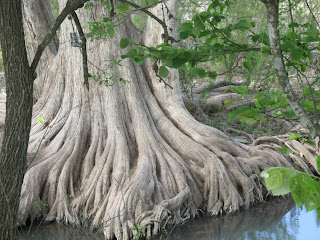 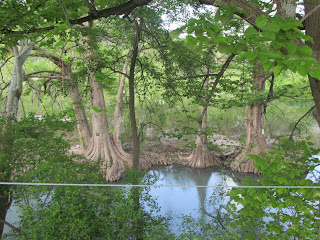 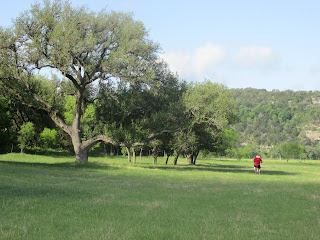 The shot above--Trisha took it because she claims this is the story of our bike rides--me always way out in front!

Below:  some of the beautiful flowers the campground owners have put out all around for everyone to enjoy 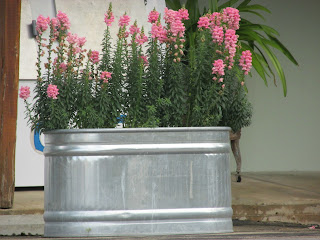 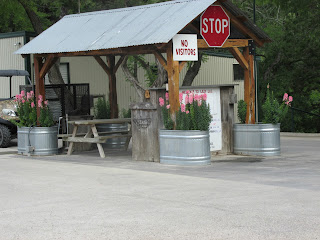 Thought this sign was funny, as it was right at the edge of a concrete pad with a drop off. 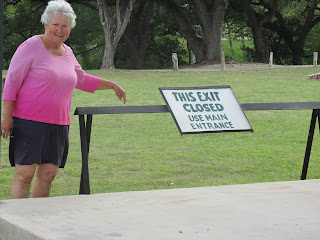 One of the campground workers had just set this rack down by a maintenance building, and we just had to take the picture--Tammy, this one's for you!! 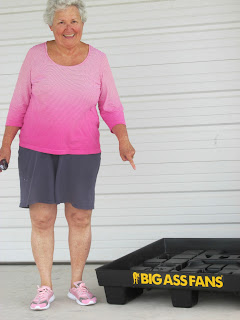 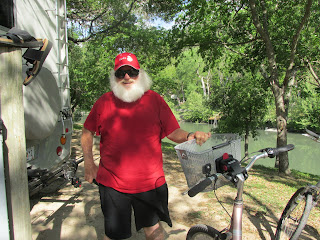 Above and below:  getting bikes back on the RV to leave 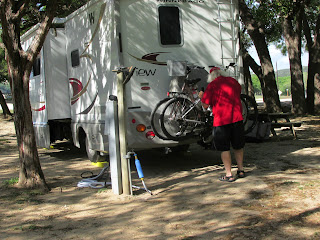 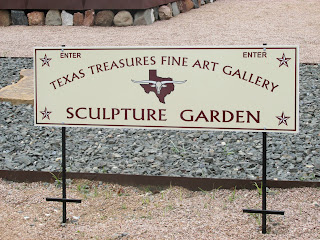 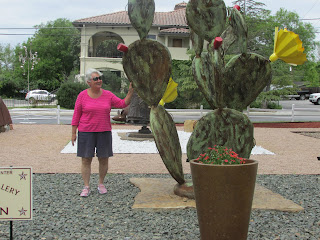 This sculpture was titled "Texas Terrain" and can be yours for only $60,000! 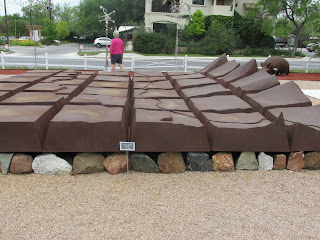 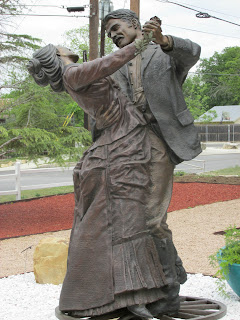 If you can't afford the Texas Terrain, you can pick up this giant armadillo for a mere $15,000! 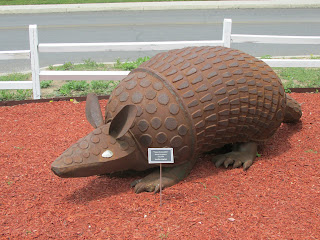 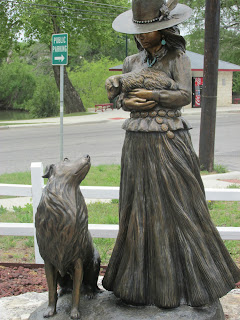 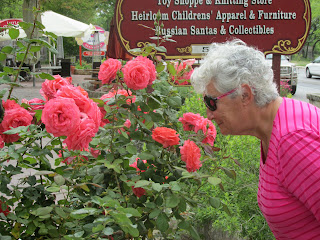 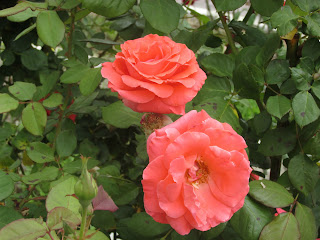 What a cute name for a knitting store! 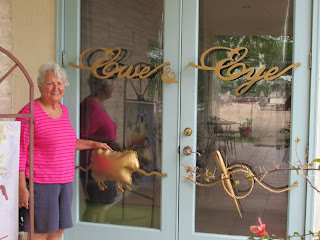 This was really interesting; we've been seeing them on lots of trucks for the last few days--and you thought cow catchers were just on locomotives!  Commonly called cattle guards, these are the first line of defense against deer flying across the roads! 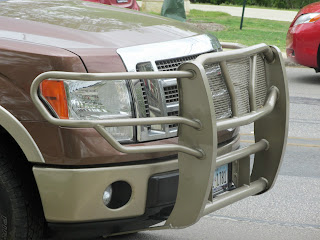