Last night when I posted about the location of the campground, I identified it as Lafayette.  Actually, I made a mistake, it's in Breaux Bridge, a much smaller town, near Lafayette.  Anyway, Breaux Bridge--what a name, huh?  Doesn't it just conjure up images in your mind of Cajun Louisiana?  Well, let me tell you, the reality is better than anything central casting could have come up with!  Everyone here talks with the most beautiful Cajun accent, and we never tire of listening to it.  We got up this morning planning to jump on the road and head west toward Texas, but guess what--we're still here!  We went to check out and Trisha got to talking to the lovely lady who runs the campground (telling on myself, last night when we saw the sign for the campground--Poche's--I was pronouncing it Poshes, like a really posh place.  Well I was of course wrong--it's pronounced like Poshays--now why didn't I figure that out when I realized we were in the middle of Cajun country???) and she said it would be a shame not to take one of Butch's swamp tours, giving us the skinny on which one of the tour outfits to go with and which ones to avoid.  Boy what an incredible surprise awaited us, and are we ever glad we decided to stay on here another day.

So we went down this little dirt road, heading into the swamp, and there was Butch--leathery tanned skin, rail thin, long hair, wispy mustache, a tattered ball cap on his head, grinning and laughing as he was unloading a group from his boat, while another group waited.  They didn't have room for us on that tour, but he called his daughter, who does the booking, and told her she absolutely had to fine room for Santa and Mrs. Claus, and his daughter came through.  We had a couple hours or so before the tour, so we meandered down the road further into the swamp, seeing lovely wild flowers, thick blankets of these little green leafed plants, which we later discovered are salvinia, that made the surface of the water  seem like grass, alligators, and a rookery where tons of egrets, herons and roseate platipus were nesting.  Found a boardwalk through part of the swamp and, after we walked that, found a shady spot along the road to stop the RV, fix lunch and take a snooze before our boat tour.

When we got back to the boat launch, Butch said he had to get his son to take our tour since he still had some work to do on his taxes on this April 15 (can't believe that for the first time in memory, I had finished our taxes in February, making sure it all got done before we left).  So David took us out, and he was an absolute hoot.  Wish I could have recorded his Cajun voice--always on the verge of laughter, and when he'd tell a joke, he just couldn't help himself, he had to break into laughter at his own joke and his laugh was so unique and just divine!  He told us about growing up on the river, his daddy taking him out as a young boy, teaching him the ways of the swamp, hunting, fishing, trapping, just like his granddaddy had done for his daddy.  He obviously knew his way around, which was good, as once you got out of sight of the boat launching area, we were back into narrow canals, dodging logs and cypress trees--if you didn't know your way around, it's easy to see how you would get so lost you'd never return.  We saw many alligators, both adult, young and babies.  We saw great blue heron, black topped night heron, brown topped night heron, cormorant, some birds whose name I can't recall but our guide described as being close to some prehistoric species, a beautiful owl, egret, snakes, even saw a nutria being stalked by a gator, 600 year old cypress trees, and so many other things I can hardly remember them all.  The swamp is actually part of Lake Martin, and he told us how the swamp used to dry up periodically, until they built levees and now water stays in it all the time.

The tour was over 22 hours long, and when we got back it was late in the afternoon, so we decided to just come back to Poche's for the night.  But before we did that, we asked Butch for a restaurant recommendation and he sent us to Pat's, in Henderson.  Turns out that Pat's is a legend in these parts, and we clearly abandoned our veganism this night--shrimp and okra gumbo, then a platter with more shrimp and about ten different preparations of crawfish, and it was just out of this world.  If you're ever in this neck of the woods, Pat's is the place to go.  As we walked into the restaurant we picked up some brochures for things to do in the area and when we got to our table, discovered that one of them was for Butch's Eco Tours--turns out ole Butch--who one might suspect was just a backwoods recluse--has himself a BS degree from LSU with a double major in biology and ecoscience!

So here I sit, HAPPYX2 parked in a site between two of the ponds, breezes blowing through the windows, listening to the night sounds--Trisha has hit the hay already--a full day on the water, having started with a brisk bike ride early this morning, takes its toll.  So here are today's pics:

2 shots of a black topped night heron strolling the shoreline of the pond by our site. 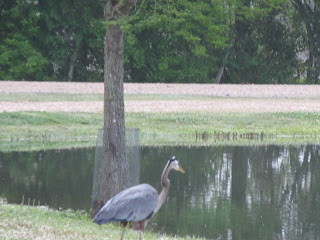 Interesting way that Spanish moss has clung to the barbed wire fence surrounding a field alongside the campground. 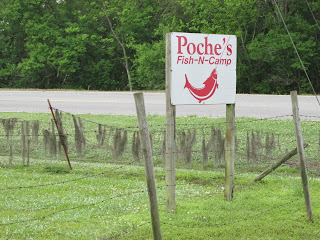 Our home sweet home shot from across the pond when we were biking this morning. 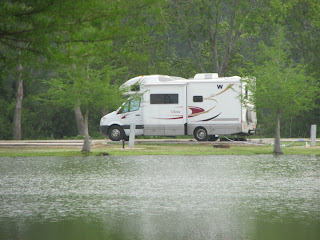 Beautiful patches of wildflowers along the road by the edge of the swamp. 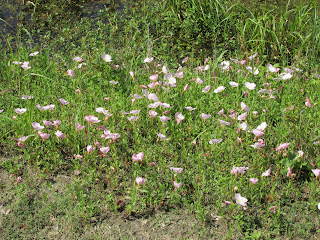 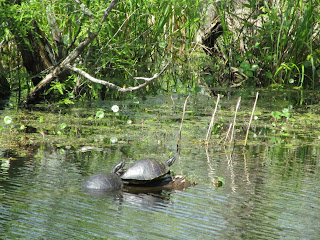 The rookery--just couldn't get a good picture that shows the immense array of different birds nesting in the trees above the swamp. 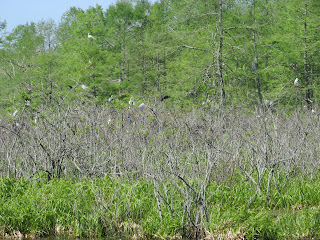 Trisha took this remarkable picture of a young gator.  Later when we showed Butch the picture, he said the striping on the tail indicates that the gator is no more than a year old--still vulnerable to being eaten by many predators, even some of the birds, until he's about 4 years old.  Then the only predator is larger gators.  As he grows into adulthood, the stripes will fade away into the solid dark color seen on a full grown gator. 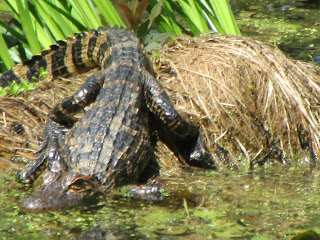 From a distance this appears to be a grassy base around these cypress trees, but it is just a thick layer of the salvinia, with hyacinths and other plants and grasses interspersed. 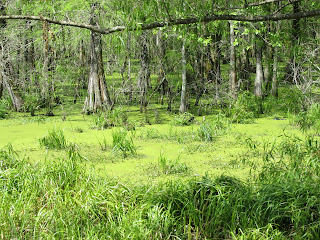 Thistle along the edge of the swamp. 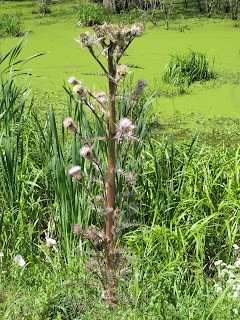 Since we never were able to get a good picture of the roseate platypus, this is from the storyboard by the boardwalk. 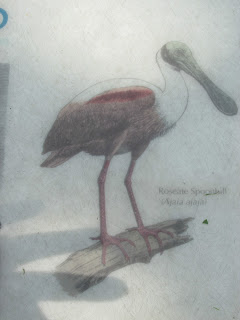 Boardwalk out over the swamp. 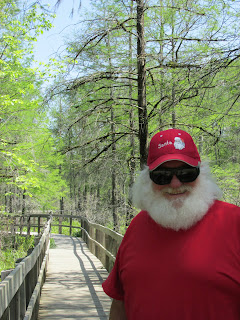 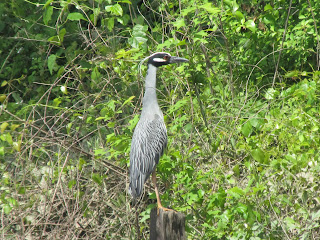 "Old Crooked Jaw" a female gator who lurks around the boat launch--it's hard to see clearly, but if you look along the top of her snout, toward the right, you can make out a row of teeth that protrude up and outside of her mouth.  Butch said she's been there for years and somehow her mandible got split, he doesn't know how, said it could have been in a fight with another gator, a boat propeller, he just doesn't know.  But he showed us a picture he took of her 8 years ago with her mouth wide open and it looks like she has three jaws full of teeth. 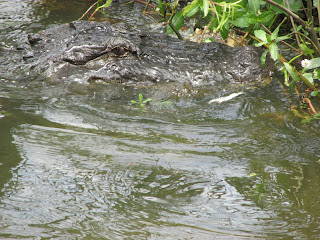 Snake sunning on the side of a tree. 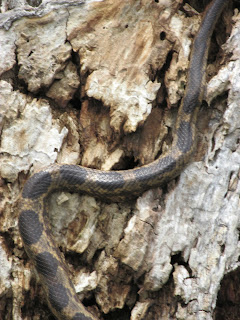 Snake inspecting all of us on the boat, probably thinking Oh no, not another boatload of those yokels! 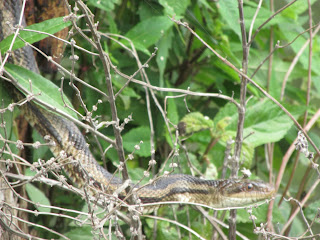 2 adult gators and the third shot is of some babies. 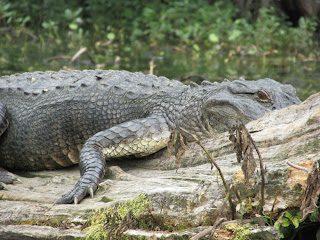 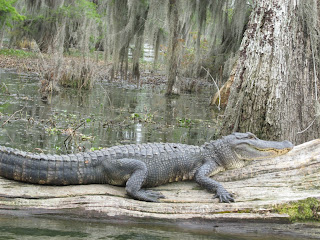 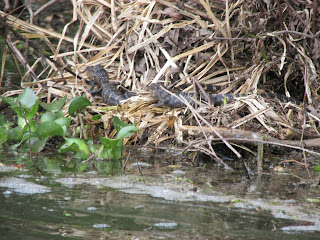 One of many duck blinds built all over the open waters of the lake--folks like Butch and his son go out and take 2 x 4's and pound them into the mud for the framing, then construct the boat garage out of corrugated tin, and have a little room for chairs adjacent to the garage, where they climb into and use slits on the other side for shooting ducks.  He drove the boat into the garage and there is hardly any clearance--very cramped, and he says he will come out here before dawn to set out his decoys and wait.  Though he didn't say it, I suspect he and his buddies likely bring along a little liquid fortification to ready themselves! 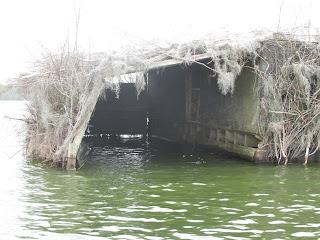 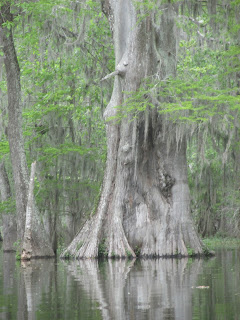 These two cypress he called the Booty Bump Pair!!  Any guesses as to why??? 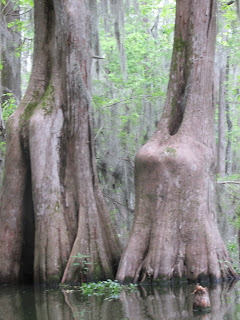 Beautiful owl up high in a tree 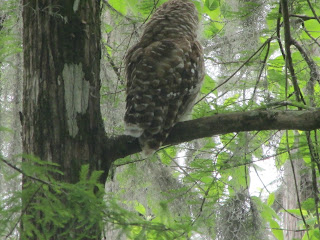 In a hole in the base of the tree trunk, one of the biggest spiders I've ever seen! 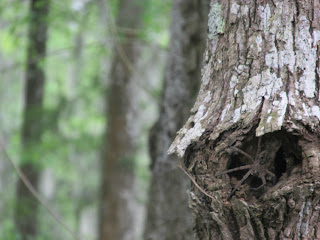 Our wonderful and hilarious Cajun guide, David--and like his Tshirt says, he is absolutely authentic! 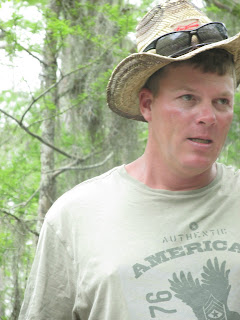 So, tomorrow, I do believe we will head toward Texas, but who knows, on this No Worries No Hurries Tour--you never know what surprises the next day will hold!
Posted by Unknown at 10:31 PM