We were excited as day broke this morning to see it was going to be a beautiful sunshine filled day!  So, after our spinach and kale smoothie breakfast we hopped on the bikes and headed for the ferry.  It was pretty nifty to just ride our bikes up onto the ferry for the 45 minute trip over to Ft. Morgan--and for just $5 a person!  The weather was perfect as we passed by the Coast Guard station, and then the Estuarium, and Ft. Gaines as we headed across to Ft. Morgan.  Saw huge freighters heading out to sea, pelicans atop buoys and stands, natural gas rigs that are prolific here.  As we neared Ft. Morgan, we saw about 10 or 20 dolphins playing in the water just off the starboard bow--I tried to get some pics, and I think on a couple of them later in this post you can tell there's dolphin there, but you may have to enlarge the photo to see them.  We had contemplated taking one of the advertised dolphin watch commercial cruises, but we figured we got our own dolphin show for just the $5 ferry charge!  We toured Ft. Morgan, which has an interesting history, from Civil War days to WWI days.  Quite interesting to read the story boards as you survey the site of the Battle of Mobile Bay.  Admiral Farragut  led the Union Navy against the forces led by the ironclad CSS Tennessee, and when his only choice was to either fall back or risk navigating through an area known to contain numerous underwater torpedoes.  Having learned that torpedoes (these were stationary devices, more akin to mines) left underwater for too long often would not detonate, he chose to charge through, leaving the lore of the statement attributed to him when his officers asked what he wanted them to do, "Damn the torpedoes, full speed ahead!"  According to the story boards there is some doubt whether he actually said this, but later it became accepted fact.  Anyway, it was an interesting tour, and it's always fascinating to me to see evidence of the skill and engineering that happened long before the modern age.

After biking around the grounds, encountering a group of birders along the way, we got back on the ferry for the return trip to Dauphin Island.  On the ferry we met a delightful fellow cycler, a beautiful older lady who we learned had retired to the area after a career as a history professor at LSU, who gave us a lot of info about the area, as well as some places to see in her native Texas when we make it out there.

After enjoying lunch in the shade of our campsite, it was time to hit the beach for a good long nap!  Walking the path from the campground to the beach we met a lovely couple with the cutest little girl, who we had seen on the beach the other day with her mother.  When she saw us she squealed with delight and ran to her dad saying "See Daddy, I told you we saw Santa Claus on the beach--there he is!!" She was so cute, and reminded us so much of our grandson, in that she was not shy at all, and quite talkative.  She came running over to walk with Santa and Mrs. Claus to the beach, and cracked us up when she said "So Santa, how are things at the North Pole, man?"  Once at the beach, or as far as we could see, there were only two or three other people besides us and this family--great time to just drift off to sleep lulled by the lapping waves on the sand, watching the gulls fly in formation just inches above the surface of the water, laughing at the sandpipers skittering to the fresh wet sand left by retreating waves to peck for sand dabs and then skittering away from the next approaching wave.  I've always been mesmerized by waves and really being near any body of water, as I think most of us are--I've long harbored the theory that this somehow touches something deep within our subconscious, reconnecting us to being surrounded by water in the safe harbor of the womb.

Then took another 6 or 7 mile bike ride up the beach path, and back to grill veggie kabobs with great chunks of portobello mushrooms, onions, red peppers, squash and zucchini, plus some corn on the cob roasted on the grill--yum, yum--followed by strawberry/banana/peanut butter smoothie for dessert!  Just another basic unbelievably gorgeous and wonder filled day in the neighborhood!

Boarding the ferry, getting ready to cast off! 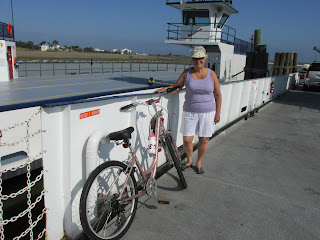 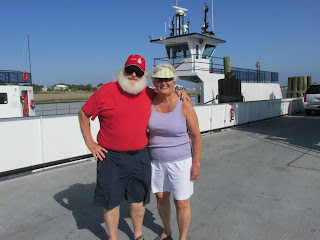 As you can see, not too crowded on a Thursday. 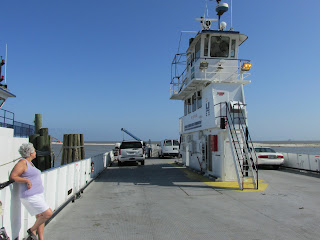 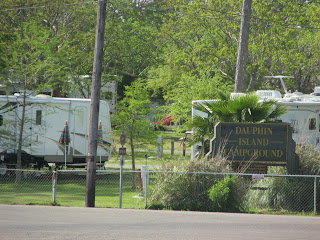 Pic above is a shot of the campground, across the road from the ferry dock; below is the Coast Guard station--not too tough a duty assignment for the mates! 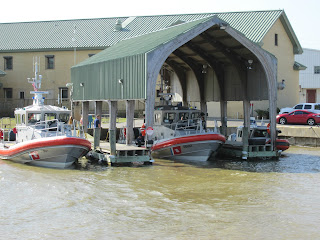 A view of the Estuarium as we passed by, where we watched last night's sunset. 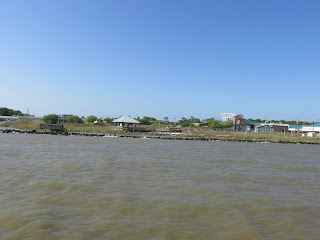 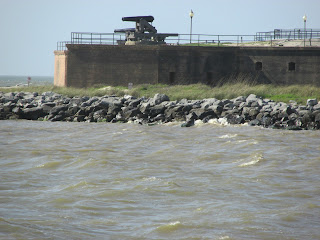 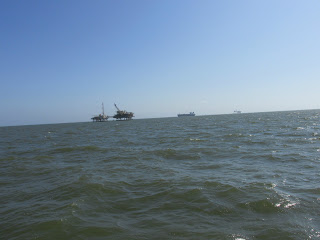 Above: one of many natural gas rigs, and a tanker in the distance.  Below:  while, unlike our daughter, we haven't been able to have our photo taken with the President and First Lady, we were able to stand where he stood a couple years ago on this ferry! 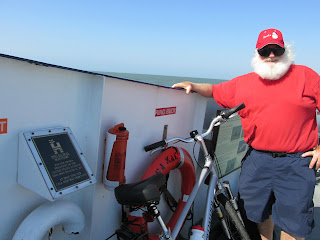 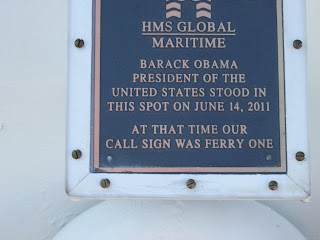 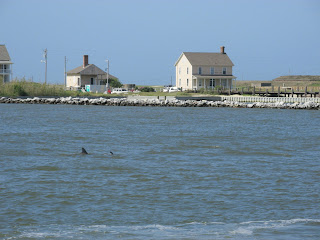 Above: dolphins at play; below: approaching Ft. Morgan landing. 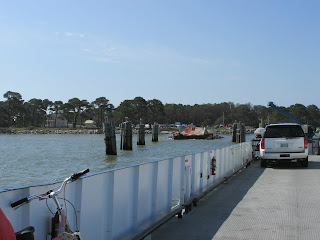 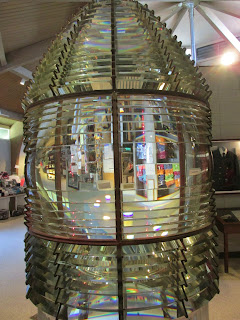 Above and below:  lights from earlier lighthouse. 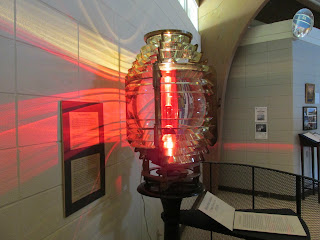 Some lovely wildflowers alongside a gun battery. 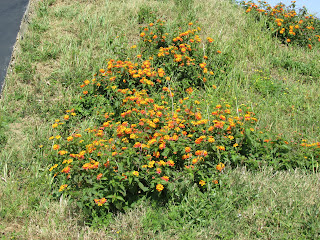 Trisha is fascinated by arches, doorways and entrances--metaphors for transitions from one stage of life to another! 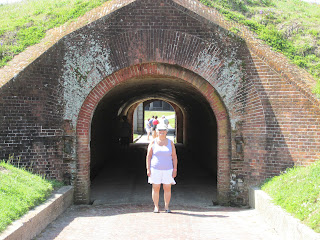 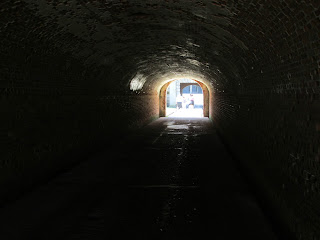 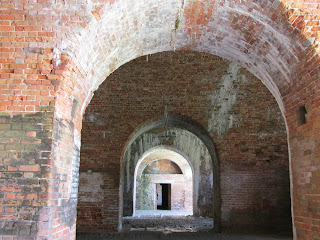 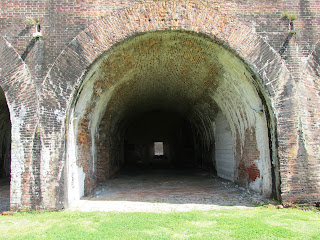 Cormorants walking along remnants of a moat between two sections of the fort. 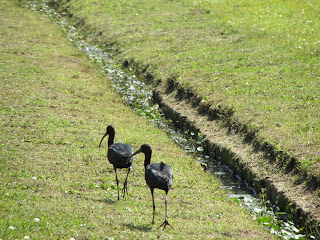 Beautiful bloom in the sand. 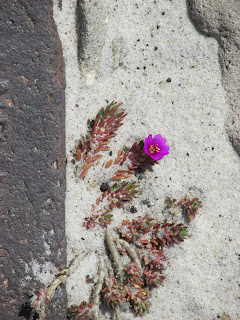 Awaiting the return ferry beneath one of the many beautiful live oaks that are so plentiful on the island. 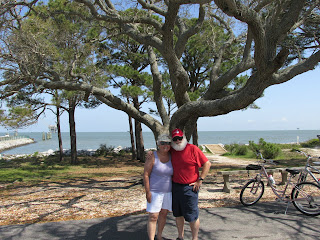 Back at our campsite from our 7 mile ride. 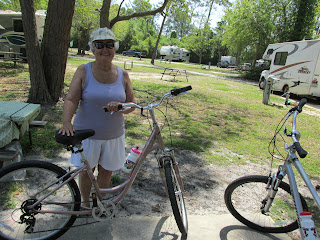 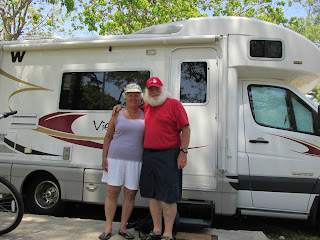