Saturday morning we reluctantly packed up and pulled out of Big Bend National Park--lots of incredible scenery, some wonderful hikes, some exciting bird sightings, and just plain awesomeness!  There's so much more to do here, we know we'll be back some day.  Reading the guide books, we know the landscape will likely be different when we return, as each time there's flooding, the waters rearrange the rocks, sands and the views change--just a miniscule sliver of the changing tableau that's been going on for millions of years in this remarkable part of the world.

Before leaving the park, though, just have to share some experiences, thoughts and observations.  I also realized that, for those not familiar with this part of the country, I hadn't said how it got its name.  The park, as well as this larger area of Texas, is called Big Bend due to the big bend that the Rio Grande makes at this point in its journey.

While most of our experiences thus far have been just spectacularly wonderful, and the people we've encountered have been mostly happy and having a good time, saw a couple of things here that caused us to pause and reflect on the fact that, even in the midst of such beautiful nature, we humans just seem to reveal our frailties and shortcomings.  The first day we arrived in the park, we had stopped at the visitors center to register and talk to the park ranger about things to see within the park.  As I was getting back into the RV, saw a man drive up in a great big rig, towing a big car behind his RV, and when he got out, he had a cigarette dangling from his lips, and then just took it out and threw it down on the ground.  Even though it was on the paved parking lot, with the way the winds were blowing, it was not inconceivable that his still lit butt could have blown from the pavement and into the brush.  With the drought they've been having in the park and so much dry grass and brush, it could have started a fire in a heartbeat.  Plus, it just never ceases to amaze me that so many smokers seem to feel there's nothing wrong with just throwing cigarette butts down anywhere.  Then, the night before we left Trisha and I were sitting out by the store where we had wifi, and a couple came up from their trailer just screaming at each other--he had seen a rare bird and was berating his wife for not having their camera with her to take pictures--so she went back to the trailer and got the camera and when she returned the bird had gone, so he yelled at her some more about how timing is everything and how badly she had blown it.  So they just fumed at each other and stomped off to their trail.  Trisha was recalling the woman we'd met at Ft. Pickens in the Florida panhandle who said she and her husband kept a tent in their RV for when they got out of sorts, she would go sleep in the tent--Trisha wanted to go tell this guy to go get a tent!  But, then I remembered a sermon Fred Craddock preached once about an imagined conversation with God, how the narrator asked God after the Israelites had once again turned themselves away from what God had taught why God just didn't give up on human beings; God replied that the reason was that there is always the chance of redemption.  So I tried to let go of my judgmental leanings here, and realize that all of us fall short from time to time, but, thankfully, there's always the chance of redemption.  Also reminded me of another wise man, my good friend and mentor in the Santa world, Santa Lee from Tennessee, who, when I complained about how some bickering and infighting that was going on once in connection with planning a Santa convention.  Lee said, "Jack, you have to remember that under the red suit is just a human bing."

Anyway, this experience was quickly relieved by another, hilarious encounter there at the store that evening.  A couple of young women came up and were trying to connect their ipads to the internet and couldn't figure out how to get the wifi going.  They saw that I was on the computer and asked me if I could help them and one just handed me her ipad and said, "Can you do it for me?"  Well, we got them connected, and I said I just had to ask how old they were--they told me 22--and I said our kids would just die laughing that some twenty somethings had to ask this geezer luddite a computer question, and that I was able to help them!!  What a hoot!

Anyway, we drove out of the park going west, and were able to see some parts of the park we had not seen to that point.  It's all just so different, and everything is beautiful in its own, different way.  Decided to stay with the back roads on our way towards Albuquerque, and it was wonderful.  Came through Terlingua, where we saw the remnants of a ghost town, and an ancient cemetery that's still used by the locals.  Then to Lacintas, and Presidio. on our way to Ft. Davis State Park, where we spent the night.  This park was lovely, enjoyed sitting out at the picnic table under the shady trees playing cards and eating supper.

Here are some pics: 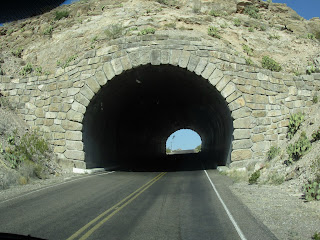 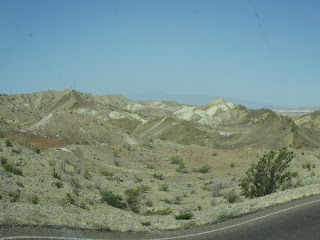 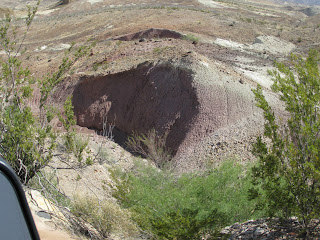 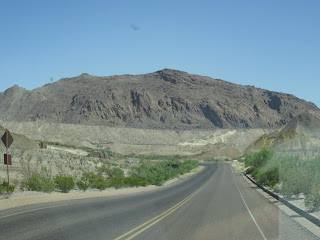 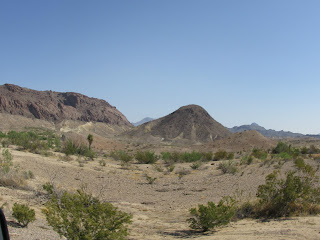 An interesting restaurant in Terlingua, that's built into the ground, and in the second shot you can see the door that looks like a door going down into a mine--it was closed since it was early in the morning, but several of the guide books said it was an interesting place to eat, since once you go in, you go down underground for the seating. 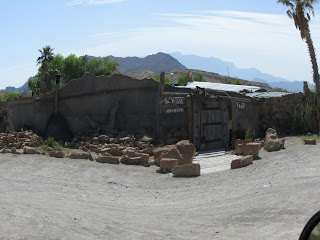 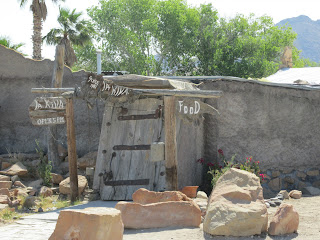 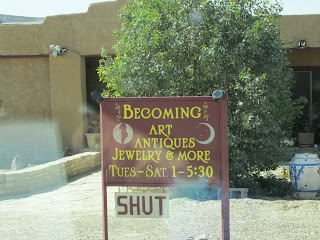 The cemetery at Terlingua, the first shot is of a marker of recent vintage, apparently marking a family plot 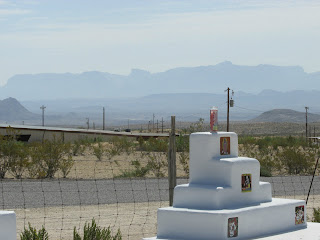 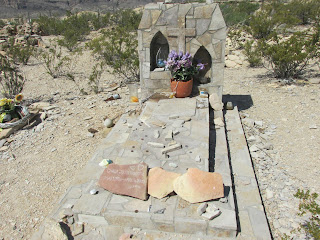 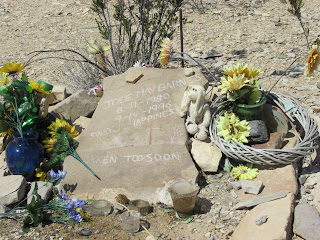 Some of the older, more primitive grave markers 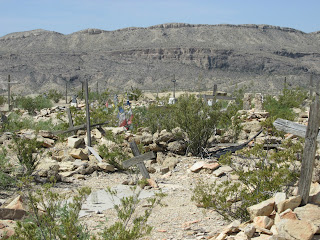 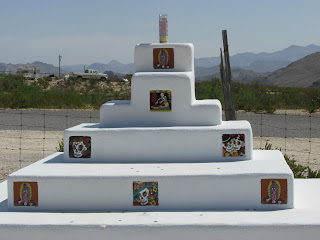 Many graves have little altars set up in stone alcoves, where relatives come to place candles, money, various objects signifying particular interests of the person who died, e.g., here a golf ball.  At first, the skull here, like many throughout the cemetery, seemed somewhat macabre to us, but in talking to a shopkeeper, we learned that this is all part of an Hispanic tradition of honoring the dead.  November 2 is the Day of the Dead, big celebration where friends and relatives gather in the cemetery, bringing money and food to place on the graves, to ensure that the departed will be well taken care of in the afterlife.  People often dress up in costumes of "Day of the Dead Figures," colorful outfits, with skull masks.  It struck me as a very moving way to celebrate the lives of those who've died, and a way to help keep memories alive. 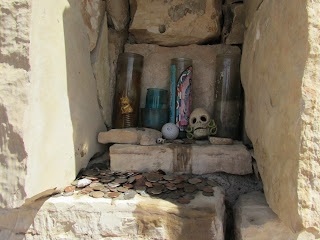 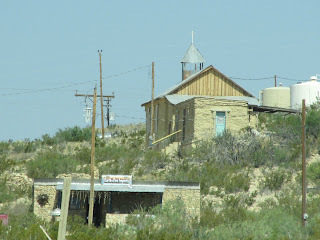 Some views from where we stopped along the side of the road to eat lunch--here horses grazing on the Mexican side, along the river bank 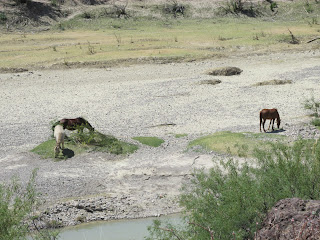 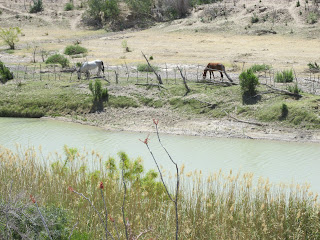 More beautiful, typical mesa and mountain views along the way between Lacintas and Presidio. 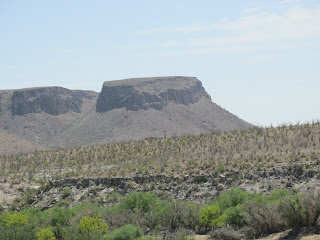 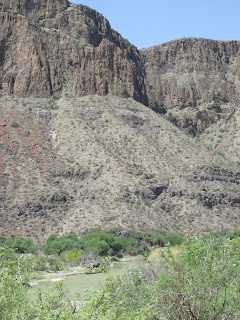 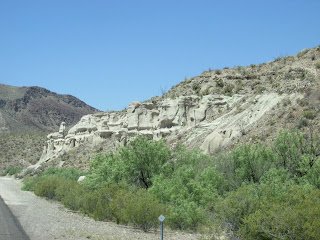 Very unique shelters for picnic tables at a rest stop 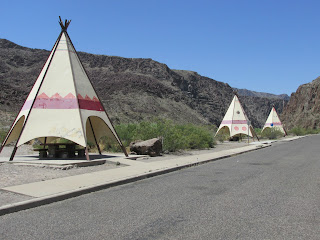 Looking down at the Rio Grande from the top of a really steep incline--in fact a bit scary as we started down. 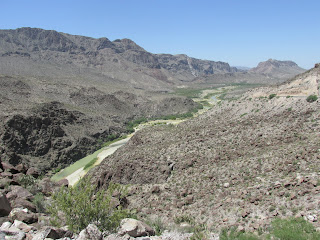 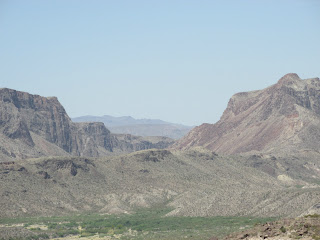 Courthouse in Presidio--sorry  I cut off the top of the cupola! 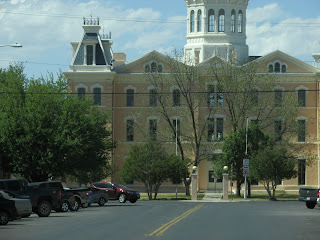 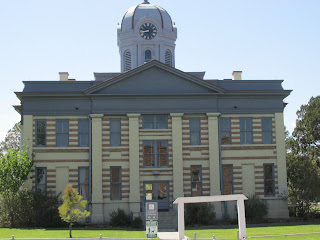 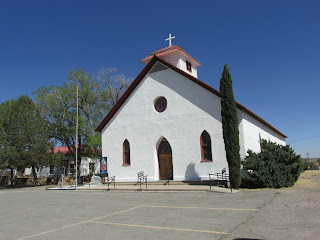 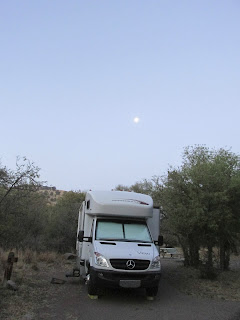 Well, I've been writing this while sitting at the picnic table at our campsite in Elephant Butte Lake State Park in New Mexico--our 7th state so far!--having just watched a beautiful sunrise over the lake.  I'll post about this place later, as we need to hit the road and beat feet to Albuquerque--developed a problem with the coach water pump and need to get there to get it fixed.
Posted by Unknown at 8:40 AM