Well, having done the early to bed half of the proverb, I definitely did the other half when I awoke at 4:00 AM and could not get back to sleep--though I had by that time already slept over 8 hours!  Certainly feel healthy, just not sure about the rest of the equation!  Anyway, we were so excited to see this day begin with glorious sunshine and, even though it was a bit chilly when I first went outside, the day held the promise of much warmer temps.  Betty McCraney, Sherry Walls' best friend from her growing up days here in Miss., walked over from her house to our campsite and we had a delightful visit, getting to know her, hearing about her very interesting life, learning plenty of secrets about Sherry with which to make tons of blackmail money to keep quiet, LOL!  Betty also gave us lots of tips on the area about what to do and see for the day.  Turns out she's been to John C. Campbell Folk School for pottery workshops, which is just about an hour from our house, so we begged her to come see us next time she goes there.

After she left, we biked over to the Park Visitors Center, which has really interesting exhibits, photos and videos about the natural and human history of the 7 barrier islands stretching from FL to AL to MS, comprising the Gulf Shores National Seashore.  Very informative.  Great scenery from the boardwalk over the marsh with views of the bayou.  Then we headed off to downtown Ocean Springs.  Betty had given us a great tip on where to park the RV, right by the old railroad depot, which now houses the Visitors Center.  Downtown Ocean Springs is a really delightful and walkable array of interesting shops, galleries and restaurants, quite an eclectic collection of places.  Had some wonderful Mediterranean veggies for lunch at Phoenicia Gourmet, and then walked down lovely bricked streets to the Walter Anderson Museum of Art.

This is a definite must see for anyone coming to Ocean Springs.  I must confess my ignorance--was not familiar with Anderson previously, but he was an incredible artist in the first half of the 20th Century.  He worked with many different media, including wood sculpture, pottery, but mostly water colors painted on a variety of materials--from small canvases to giant, multipanel murals to murals painted on walls, exterior and the interior of the community center and rooms of a small house he lived in sporadically over the years.  His life story, narrated in part by his daughter in a video presentation, was fascinating, and indeed painful in lots of ways.  Much of his work depicts in various forms his lifelong struggle with trying to reconcile the concentric forces of being a part of a community and society, and his eccentric nature, which led him to spend much of his time in isolation from society, the community, and indeed his family.  Like seemingly so many gifted artists through the years, Anderson suffered from schizophrenia, which caused much struggle and pain for him and his family, but which also, I suspect, informed much of the remarkable work he produced.  From there we went to the Shearwater Pottery, the business he founded with his brothers.  Anderson very much believed that art should be accessible and affordable to everyone, and he was bound and determined to make it reasonable in many ways.  He was also forced to produce enough commercially salable  works through the pottery to support his family and his need to do his more creative artwork. Also interesting was this was the first time we had experienced using our cellphones for a guided tour--I'm sure many others have done this before, but for us it was the first time, and allowed us to go through the exhibits at our own pace, very nice.

Then on to Bay St. Louis, driving along highway 90, right by the water.  In places the water was lapping up onto the roadway, so we were glad it was not a stormy day!  We are staying at the Silver Slipper RV Park, which is a total hoot!  It's operated in conjunction with the casino, and we would never have thought to stay at a casino RV park, but some new friends we met at the Dauphin Island Campground who liver in MS told us about it, and it's quite inexpensive, and we're right across the road from the beach!  Fortunately the casino is not really adjacent to the park, but is down the road a bit.  The attendant who checked us in told us we could call the shuttle service who would immediately come pick us up and take us to the casino and return us whenever we wanted, 24 hours a day!  This whole setup is geared to entice folks to come to the casino and lose lots of money, but we'll just enjoy the beach and tomorrow go into Old Town Bay St. Louis.  We talked to Sherry's cousin, Beverly, who lives here, and she told us we hit a good weekend to be here--they have what they call Second Saturday, when most of the shops in Old Town will stay open late tomorrow night, and lots of festive atmosphere.  So that should be fun--hopefully won't be frequented by too many of the spring breakers who are expected this weekend at Biloxi and Gulfport.  We read in the local paper about how traffic should be killer in those cities and the police were already out in full force for crowd control along the beaches as we drove through these places.

After we set up, I took a lovely bike ride along the beachside, and on the way back saw a brilliant sunset.  Pics to follow:
Betty McCraney and Trisha on the couch in the carhouse. 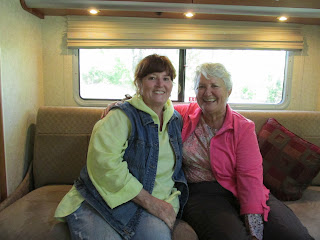 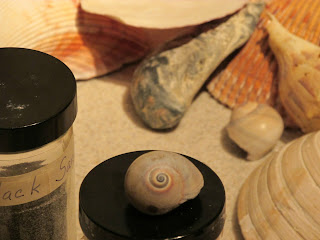 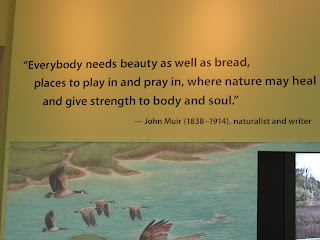 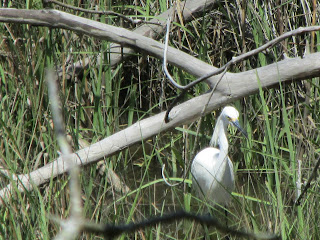 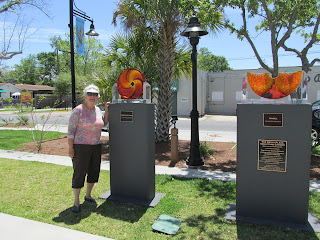 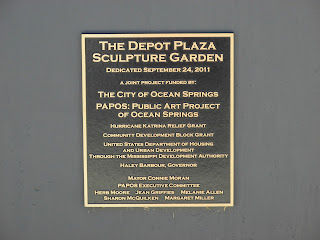 Iron pelican outside entrance to depot. 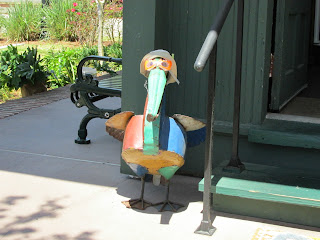 Couldn't resist this one, since much of my time at the law firm was spent representing the railroad group that included the L & N! 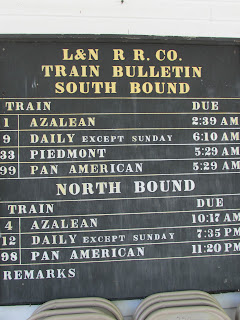 Some of the beautiful flower displays that are everywhere in downtown Ocean Springs! 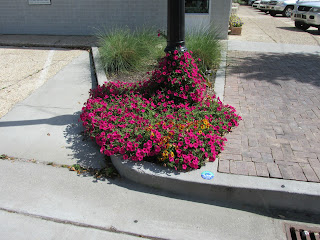 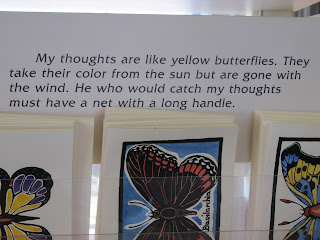 Gorgeous sunset from our site in Bay St. Louis. 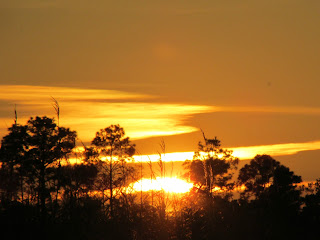 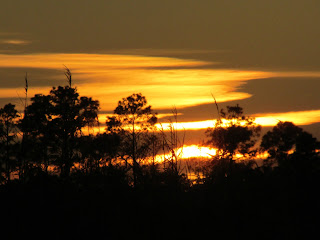 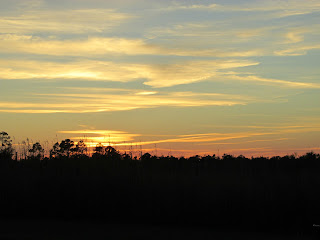