Saturday was a great day in Capitol Reef National Park.  The drive from the campground to the park is about 10 miles, and it is lovely.  Stopped at a place called Panorama View just as we're entering the park and had some wonderful views of yet again different formations of rock, ridges, valleys--never ceases to amaze us how different these places can be and yet be relatively close to each other.  Capitol Reef lies in an area known as the Waterfold Pocket, and was originally going to be called that, but when it came time to designate it as a national park, they decided on Capitol Reef because a lot of the white dome like rock formations reminded them of the US Capitol Dome, and Reef because a lot o the ridges are like giant reefs.  Another interesting thing about this park is that there is no fee station when you enter the park--the only fee station is for the Scenic Drive, which you don't have to do, but starts well within the park.  We had never encountered this before, so today when we were in the visitors center we asked one of the rangers and they said this was just the agreement that was struck with the state, I suppose because Utah State Highway 24 runs through the park.  Anyway, since we have the Senior Pass, it was not a matter of a fee, but just found this situation unique.

Fortunately we were there early, so as we made it to our first stop in the park--the Gifford House--we got a nice shady parking spot.  This house is both a museum, set up to show the way it was back when some of the early Mormon settlers formed the little community of Fruita, and a gift shop.  The main reason to stop, though, as they told us at the visitors center, was their fresh baked scones and breads.  So we split a pumpkin scone with a cup of coffee, sitting outside at a picnic table alongside the Fremont River--just a beautiful way to start the morning!  As we were sitting there we saw people beginning to hike up the mountain across the road, so we decided to do this hike--Cohab Canyon.  We could walk to the trailhead from where we had parked, so we decided to do the hike before doing the scenic drive--good decision for two reasons--it's an out and back hike and by the time we got back it was really hot, and the parking lot was completely full.

It was a fairly steep climb initially, but then it eased up and it was a great hike.  Lots of new and different rock formations and wonderful views.  Met some really interesting people on the hike, which we always love to do.  There are a number of spur trails off the main trail and we took several of these to see what we could see.  Found some interesting small cavelike holes in some of the rock that were really interesting.

After we did this hike, we drove the scenic drive--terrific views and excellent chances to see the different layers of rock, formed in different periods.  Moenkopi, dark red, composed of mud and shale deposited in quiet lagoons and coastal floodplains when southern Utah was located close to the equator, 225 million years ago.   On top of that is the Chinle formation, which is gray-green, deposited later, when there were wooded river floodplains, lakes and tidal flats.  Some of the gray color comes from ash from distant volcanoes.  Then standing high above that layer are the red cliffs of the Wingate Sandstone, which are the remains of the huge sand dunes of an ancient desert.  Really fascinating to see and learn how each of these different layers were formed and how long ago it all happened!

From there we drove out to the old Fruita Schoolhouse, a one room building built to serve the 10 Mormon families who settled here to establish a community and grow fruit orchards, some of which still remain.  The building was locked, but we could look inside and they had a short recording describing it, including some interviews with the woman who was a teacher there before it closed in 1941.  It housed grades 1-8, all in one room, and they only held classes in the winter, so the children could help with the spring planting and fall harvesting.  Saw a couple of mule deer just grazing in the grass right by the schoolhouse, just a few feet from where we parked--completely unconcerned about the humans around, as they decided they'd found all the good stuff on our side of the road, then strolled across to see if there was greener grass over there!  Then on to see an area on the rock walls where numerous petroglyphs were scratched into the "desert varnish,"  the dark red and sometimes almost black areas of the rock walls resulting from a high concentration of manganese oxide--looks just like someone spilled a giant can of varnish down the canyon wall.  It's fascinating to see the figures these ancient dwellers drew--people, animals, and often lots of spirals (which of course Trisha just loves!)  And some of them are very high up on the rock walls--who knows what ledges or other formations were there when they scratched them into the rock, but from where they are now, you'd have to have scaffolding to reach them.  By the way, learned the difference between pictographs and petroglyphs--pictographs were painted onto the rock surface, while petroglyphs were scratched into the rock--I know all of you were on the edge of your seats just wondering about this question!  LOL!  Anyway, just in case you're ever on Jeopardy and this comes up as the final jeopardy clue, you can thank Santa for sharing this piece of information!!

Then, to end the week with a bang, we spent the late afternoon and evening at the annual Cowboy Poetry and Music Festival in Torrey, held at a bookstore/cafe that's nestled under some tall cottonwoods, with a stage set up outside on the lawn, with a beautiful panoramic view of the mountains behind.  This was a real treat, and lots of thanks to Jim and Sue Ann for hooking us up.  They had told us about some good friends of theirs, Larry and Annette, whom they met while all of them were full time RVing, and with whom they'ved stayed in contact.  Jim had called us to tell us that they would be at this festival and would be looking for us.  Well, it turns out that they were not "just there."  They were the honchos, producers, announcers, photographers and all around in charge!  There is something called the Entrada Institute, formed to preserve and promote the cultural history of the Colorado Plateau and they are on the board, and are in charge of the summer Saturday night program series, and this was the kickoff program.  It was just a delightful afternoon and evening, with mostly local folks, playing cowboy music and reading or reciting their original cowboy poetry.  Now those who know me know I'm a big fan of country music, but this is quite different.  These songs tell stories, often in much detail,  about life in the mountains working cattle, sometimes about specific events, some about legends, such as Butch Cassidy, who is said to have hidden out in Torrey, some just slice of life glimpses of this way of life, and some about pretty profound philosophical views, some just plain funny.  It was just a wonderful way to cap off another wonderful day and week, sitting in our lawn chairs among a truly eclectic mix of people, enjoying great entertainment as the sun was setting on the mountains behind the stage.

Had another great day today, but with the wifi working very slowly, I couldn't get today's pictures to upload, so I'll just post the pics from yesterday, and hopefully tomorrow night when we get to Arches we'll have a better wifi connection.

Views from our campsite--not too shabby, huh?

Views as we drove into the park

Trisha built a little stupa with some rocks lying around

Out on the edge of a precipice, though really didn't want to jump the gap to go all the way to the end--it's a bit higher than it appears in this pic! 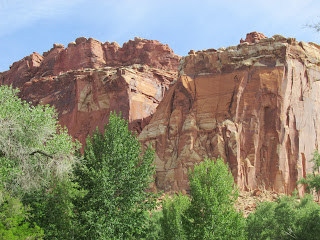 A "mail tree,"  big cottonwood that had some lovely old knarled trunk and branches.  Got its name from the fact that folks would hang a box from the limb of the tree nearest the road, so the mailman could put the mail in the box as he rode by on his horse.

Folks sitting outside, enjoying their fresh baked treats from the Gifford House

Inside Gifford House--note the christening gowns on the wall

Marmot poised on a rock between the river and Gifford House, as we walked back to the RV

Heading up the trail

Looks like Trisha's about to get chomped by a giant set of dragon teeth!

These intricate rock patterns, formed over thousands if not millions of years, show the incredible power of water--all so beautiful, and this one just stole my heart (sorry, couldn't resist that one!)

Above and below:  two examples of beautiful flowers in the desert!!

On the way back down

Shots through the window of the schoolhouse

At the Cowboy Poetry and Music Festival--Larry introducing the next act.