Today we just took our time starting out--that's a good thing to do from time to time.  And what a day it turned out to be.  The biggest news is what I heard from my doctor this morning.  Per her request, I've been keeping a log of my blood pressure and sending her periodic updates, so she can monitor it.  After Christmas I had, sad to say, put on more weight, which has been a pattern for me for  most of my life--lose weight, gain weight, lose weight gain it all back and then add a little.  Shortly after Christmas she had put me on yet another blood pressure medication.  My closet has for a long time looked like a rack from a men's clothing store--suits for the trim fit all the way up to designs by Omar the Tent Maker!  Well, as we were preparing for our trip, I found a blog by a woman who has the same kind of RV as we do, and she has been incredibly helpful to us as we've started this adventure.  But, while she has given me great tips on RV life, by far her greatest gift to me has been her inspiration to change the way I eat.  She and a couple of her friends, who met RVing, all became vegans and have a blog called Vegan Vagabonds.  I had never seriously considered this before, but for whatever reason, the way she described her new lifestyle and the recipes they all shared just clicked.  So, I followed her lead and got a high end blender to make spinach and kale smoothies for breakfast every day, along with juices, soups and other goodies.  Trisha and I started this in mid February, and I have now lost over 50 pounds, and Trisha has lost more than 30 pounds!  What's more, my blood pressure has been steadily coming down, and today my doctor started cutting back on my meds!! Oh happy day!!  When I saw her shortly before I left and told her we had started this she was way beyond excited.  She said she and her husband have been following a plant based diet for some time--she said they eat meat some on weekends, so this was good encouragement that we don't have to be completely rigid about this--and her husband eventually was able to come completely off his bp meds.  That's my goal, ultimately to be able to get off all my blood pressure and cholesterol meds.  Anyway, today was a red letter day when she cut back on the dosage for me.  Who knows where it will end, but this is great news indeed.  And thank you, Lynne, and Vegan Vagabonds, for your inspiration!!

So, we started out the day by boing to the post office to ship home 2 boxes of clothes we had brought with us, but that are now too big!!  That's postage we were more than happy to pay!  I had to get some new hiking shorts the other day and was able to get some that were several sizes smaller than what I'd been wearing, along with a new belt.  Our daughter had told me some time ago that if I ever lost enough weight to have to get a belly vest to fill out my Santa suit she'd pay for it.  So, Shelley, get out your checkbook!  Anyway, we're still working on it, but hiking and biking as much as we've been doing is definitely much easier now that we're both a bit smaller--and it makes it so much easier to move around each other in the relatively small confines of the carhouse!!

We went to the visitors center to get some hiking maps and more info on options and then went to the Hole in the Rock Heritage Center.  In the late 1870's the Mormon church called a group to make an expedition east of the Colorado, to nurture better relations with Native Americans in the area, and to spread their religion.  So in late 1879 250 men, women and children set out in 83 covered wagons on the most direct route from here, which was a very steep descent through incredibly rough terrain.  And of course they were starting out in the dead of winter.  But the most remarkable obstacle was that the only way along this route to reach the banks of the river was to blast out a narrow seam that existed in huge rock formations to get down.  So they blasted out a narrow passage way, chiseling out ruts in the stone for wagon wheels and at places, drilling holes for poles on which they constructed some crude road.  Anyway, in January they did this and all 83 wagons made it down--one by one, while they had the brakes on the back wheels chained in place and all the men and horses pulled back on ropes tied to the back of each wagon to gradually lower it down.  The pictures and artists' renderings of all this are rather mind-blowing, to say the least, along with excerpts from the diaries of some of these hardy souls.
Well, tomorrow, we're renting a jeep to drive down the Hole in the Rock Road, which we've been told is quite an experience.  We're really looking forward to this--our friend Jim in St. George just raved about this.  Can't wait!

Then we went to Petrified Forest State Park and hiked for a couple of hours.  Some great views and we met some interesting folks on the trail, including a couple from Virginia who have been along the same basic route as we have since the Grand Canyon--we've seen them from time to time in different places.  As we were starting up the trail we met some folks coming down who said they had seen a rattle snake off to the side of the trail--they warned us to keep our ears sharp to listen for the noise of rattles.  Well, I was surprised that Trisha even wanted to continue on this trail after hearing this!  But I guess Mr. Rattler had heard enough and evidently had retreated far into the brush off the trail, since we didn't see him or hear him--we love sight seeing, but this is one sight we definitely were happy to miss!!  As we were heading up the trail Trisha notice a pair of sunglasses lying in the sand, so she picked them up and we took them to the campground office when we got back down.  Turns out they were prescription glasses and the woman who had lost them had just been in the office inquiring if anyone had found them, so we were happy to accommodate her.  The wind was pretty ferocious as we reached the top and were coming down--saw lots of tumbling tumbleweeds blowing across the trail and the parking lot when we got back to the RV.  We'd planned to hike some more in the afternoon at another site, but realized we were still a bit stiff from yesterday's climb back up out of Bryce Canyon, so we just came back to the campground and enjoyed a lovely nap!  After we woke up I went for a bike ride for about an hour, and found some back roads through farms and ranches, all along the base of the mountains--just a fantastic place for a ride, even though for much of the way I was fighting headwinds.  Also saw some beautiful red rock with swirl patterns--but realized I had not brought the camera with me.  So we'll definitely go back there tomorrow after our jeep ride to take some pictures.

All in all, another wonderful day!  Not as many pics today as in the canyons but here they are: 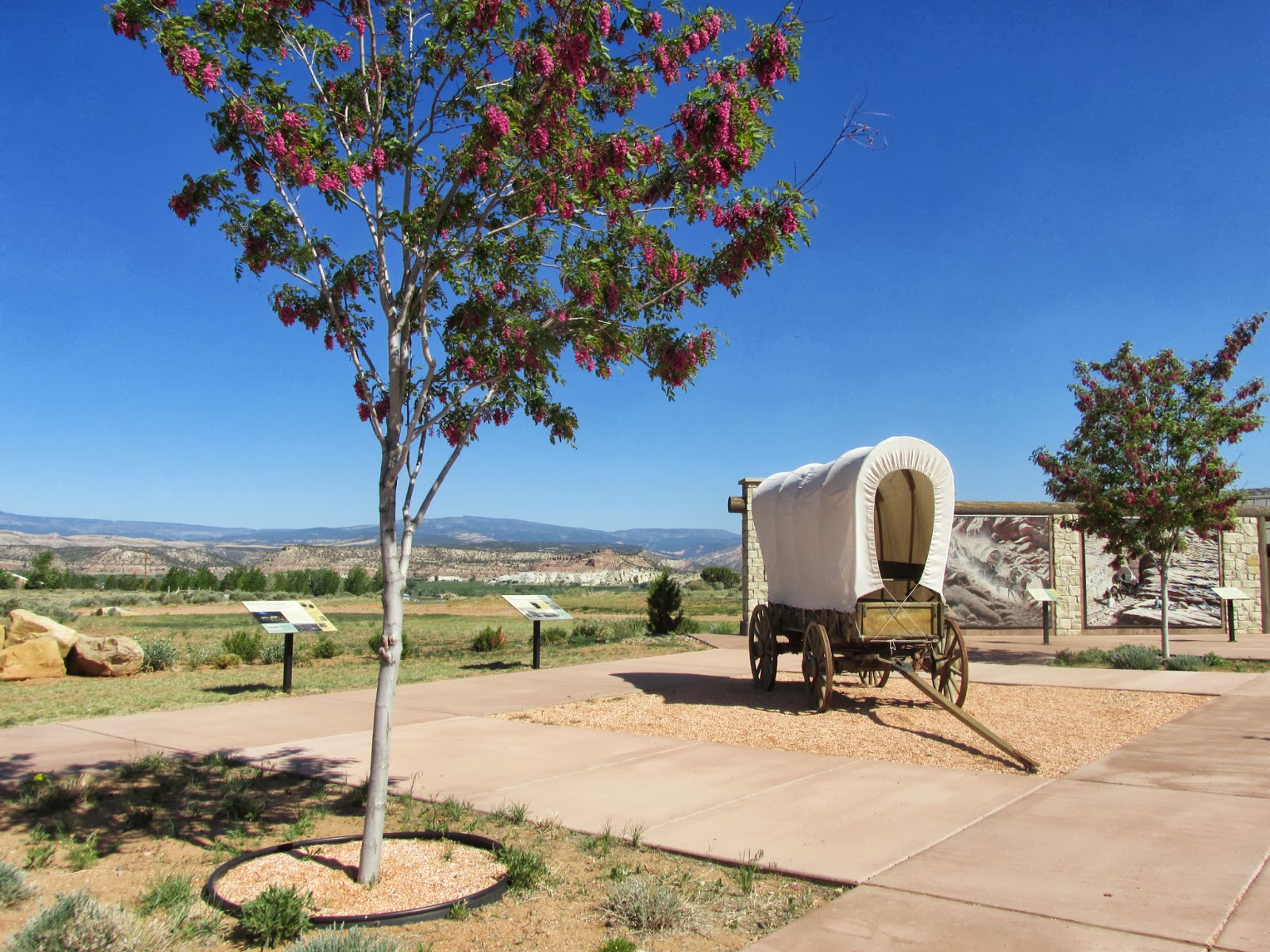 Since our sister-in-law Colleen is a midwife, this caught our eye 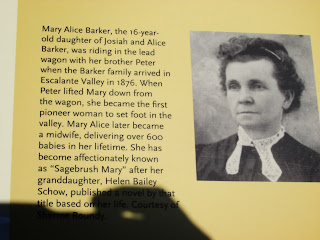 Two artist's renderings of the descent through Hole in the Rock 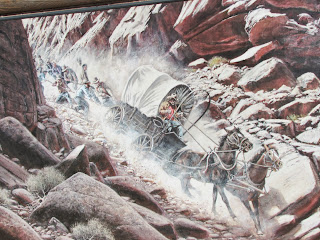 The story of this painting is that the man who quarterbacked the operation looked around the banks of the river, counting to make sure all the wagons made it, then realized his wagon, along with his wife and three small children were not there.  He climbed back up and found them waiting--his wife told the 3 kids to wait there, then she held on to the horse at the back of the wagon, pulling against the momentum of the downward travel, and eventually made it, even though she and the horse fell and she injured her leg.  They went back up top and found the kids, waiting patiently, just as they had been instructed. 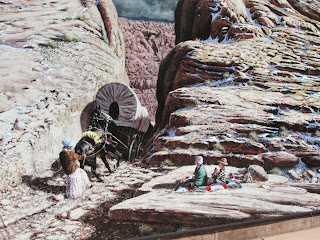 Inside view of the wagon, though this really doesn't give you the real sense of perspective--it was very small inside! 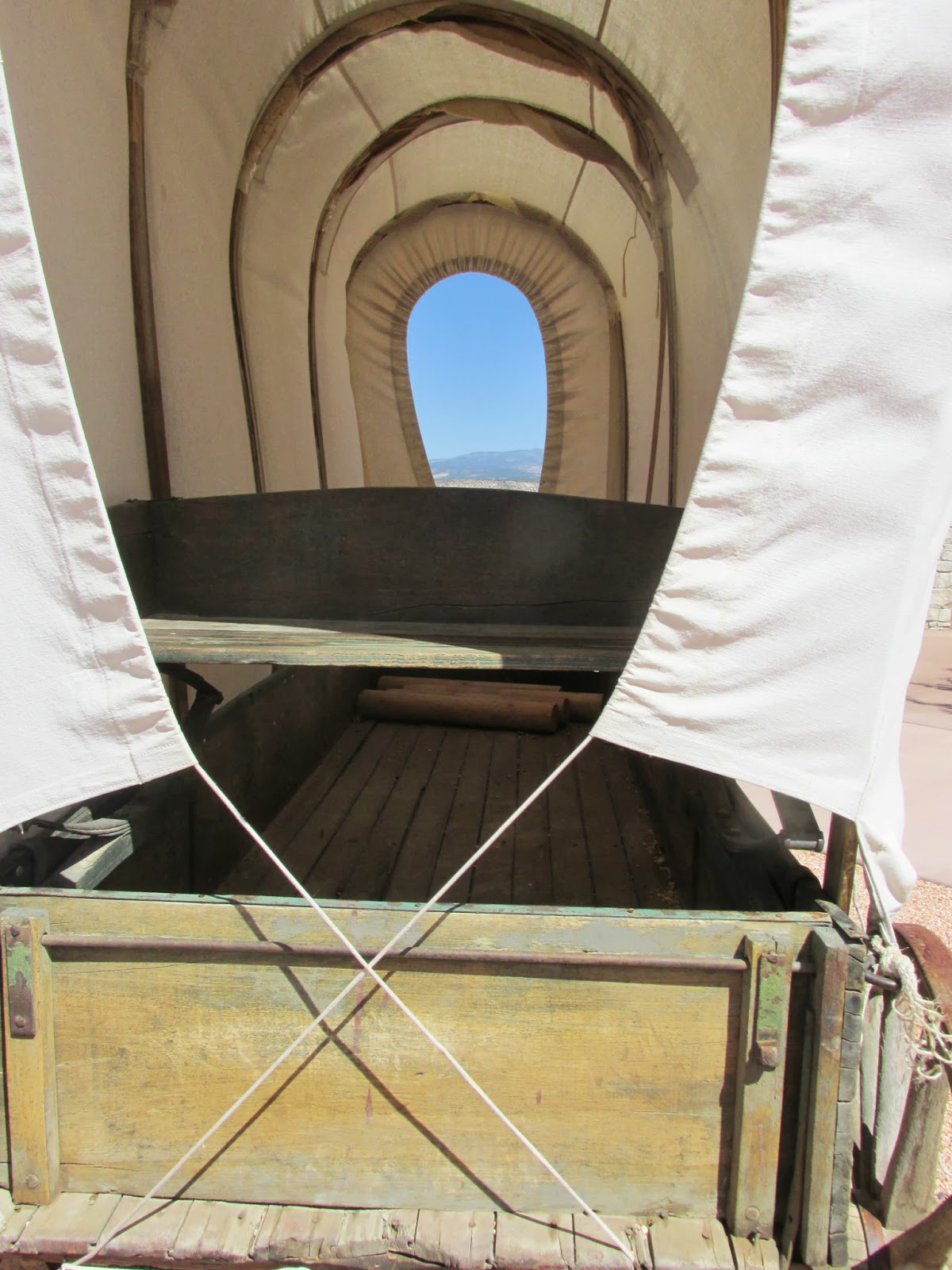 Even though we won't be taking the RV down Hole in the Rock Road, we're so happy we're traveling in it, rather than the wagon on the right! 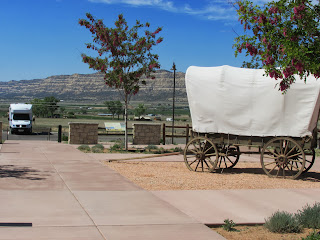 At Petrified Forest State Park, looking back down on the lake as we hiked up 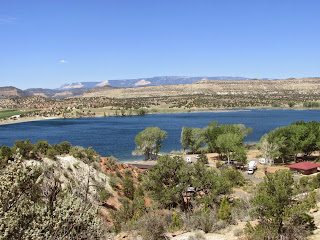 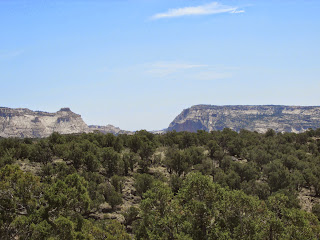 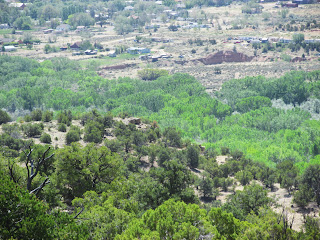 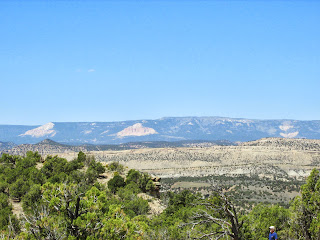 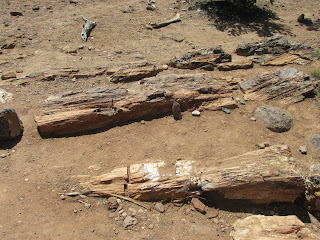 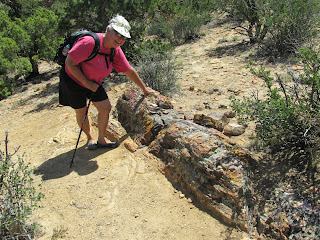 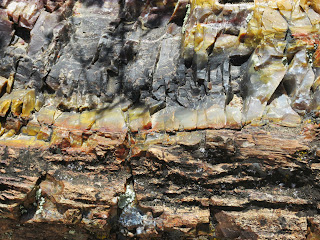 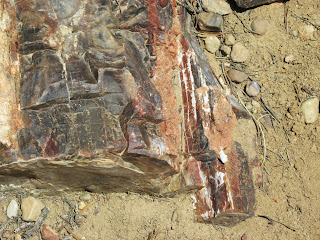 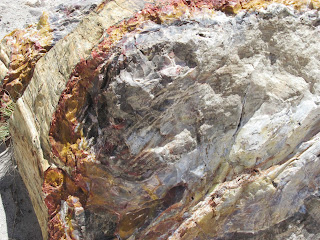 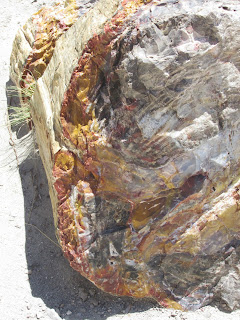 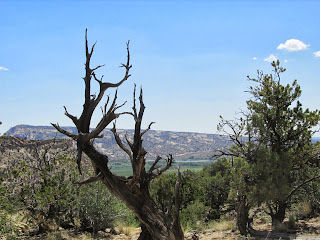 Lovely lush green farm fields down in the valley 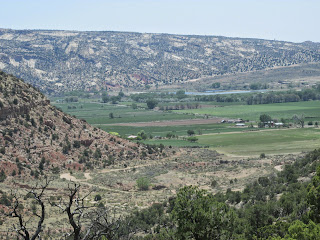 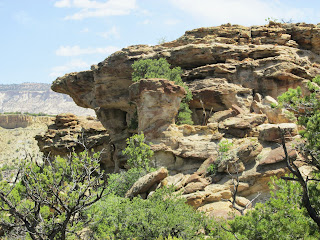 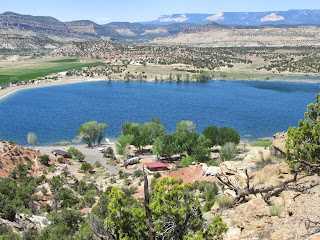 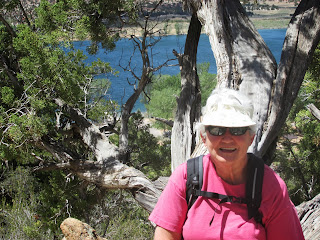 Back down in Escalante on our way back to the campground, we passed this converted church and it just struck me as funny--look at the big Community Center, and then look at the sign on the little building on the right.  You may have to enlarge the picture to read it, but it's the Senior Center--shows how we geezers are just almost an afterthought sometimes! 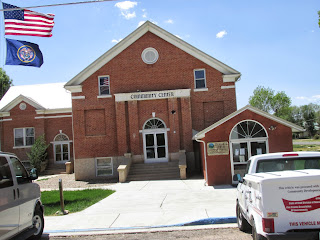