Yesterday was a leisurely day--did a little adjustment work on my bike and a little maintenance on the RV--so nice to have Happyx2 all shiny like new again!  Then I went to visit with Brian and Julie, some friends of Shelley who live here.  I had met Julie at the wedding, but had not met Brian before.  He is a veritable walking encyclopedia of the history of this part of the country, with incredibly detailed knowledge of the many different Native American peoples in the area and it was fascinating to talk with him.  He's a lawyer and turns out he was once a summer associate at my old firm, but after I had already taken early retirement, but he's also admitted to the Navajo tribal bar, which is really unique.  I have long had an interest in Native American culture, particularly after my time several years ago studying the Native American flute with R. Carlos Nakai, the premier Native flute player of all time.  Anyway, Brian gave me some wonderful tips on places to see in the area for different takes on Native history, from the point of view of various different tribes.  He has an awesome library of books, and loaned us several on New Mexico and Arizona.  He also is an inveterate hiker, so Shelley had given him a heads up that I was interested in hiking in the area.  So he gave me several leads on fun hikes to do in the days before Trisha gets back.  Once she gets back Tuesday night, we'll just spend one more day in ABQ before heading to the Grand Canyon, to be sure we get there before schools let out.  But we've decided that there's so much to see in NM and Arizona, we'll probably double back through after we see the Grand Canyon and visit our friends in Utah.  Gave Julie and Brian a brief tour of the RV--Brian said that he sees a similar tour in his future retirement days!  Julie's mom had done a one year RV tour around the country some years ago, so she was really interested to see the interior, how much RVs have changed since then.

Anyway, after leaving them and running a few errands, I went back to the Paseo del Bosque bike trail and rode about 12 miles before calling it a day.  Decided to move from the campground where I had been staying to be close to the hike I had planned for today.  Ended up dry camping in the parking lot of the Sandia Resort and Casino--they, like a lot of casinos, allow you to stay in your RV in their parking lot for free.  Guess they figure there's always the potential for some RVer to be the next couple like that 1985 Albert Brooks movie "Lost in America" who will be willing to stroll on over to the casino and lose their nest egg!  Sorry, Sandia Casino, I'm not the one!  Several other RVs were there, all parked at the far end of the lot, away from the casino.  But it was rather nice--I parked as the sun was beginning to set, had some wonderful mountain views and enjoyed a really beautiful sunset before crawling into bed.  Couple of times I woke up during the night and peeked out the window, and yes, still a steady stream of players constantly coming.  I saw a billiard for this casino that touted they would pay out "500,00 a day in May."  Pretty staggering when you think how much more people will lose in order to enable the casino to pay out that much!  Anyway, the casino is at a good deal higher elevation in the Sandia mountains than the places I'd been staying, so the wind was pretty ferocious all night long.  Like the Big Bad Wolf saying I'll huff and I'll puff and I'll blow your house down.  Was rocking all night, but the carhouse was strong and up to the task!

I had planned on doing this hike called La Luz, or the light, that Brian had recommended and was close to the casino.  But, after negotiating many switch back turns on the road up to the parking area for the trail, when I got there the parking area was completely full and there was no place to park the RV.  So I had to come back down and find another hike.  Unfortunately the hiking guide book I had didn't say anything about whether you could easily get to these trails in an RV.  So, eventually found a hike called Tres Pistolas--literally 3 pistols--called Three Gun Springs Trail.  Easier to get to and plenty of room to park the RV.  I did about 6 miles, combining the main trail with some spinoffs to see the old springs, and did the Hawk Watch trail off of the main trail.  The majority of the hike was not too strenuous, though always ascending, but the last part was a pretty steep climb.  It's an out and back hike, you hike up to the top from the trailhead and then retrace your path back down, with a total elevation rise from the bottom to the top of a little over 1640 feet over a couple of miles.  Given that the starting point is at 6400 feet, the altitude added an additional degree of difficulty for me.  But I took my time, drank lots of water, and made sure I kept the sunscreen on.  The trekking poles sure helped, especially coming down!  It was partially overcast for part of the day, but the sun did come out and had some spectacular views.  Since most of the trail is completely out in the open with no shade, I can see why the guide book says do this in the spring or fall and not in the dead of summer!  It was a great hike--good views, good exercise, and though it's started sprinkling a few drops tonight, it did not raid while I was out--all good!

Here are some pics from last evening and today:

Some views of the Sandia mountains rising up behind the casino parking lot. 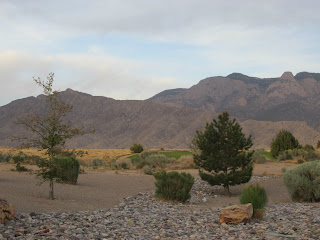 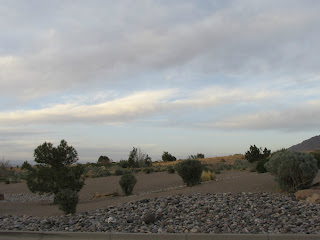 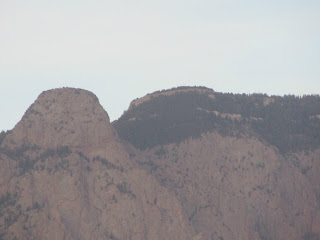 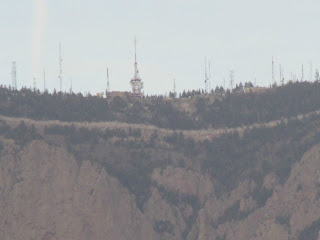 Sunset, looking down from the parking lot toward the casino 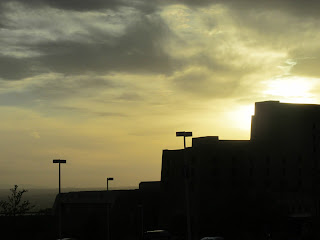 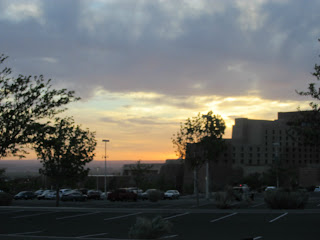 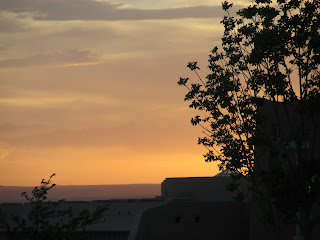 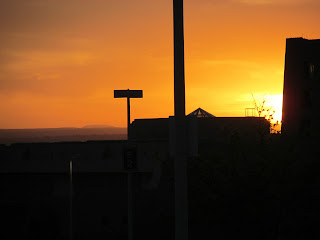 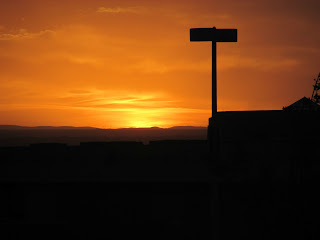 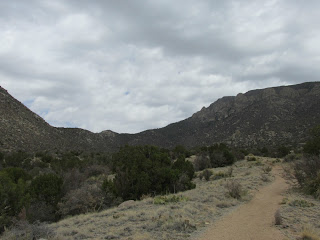 Above, looking up along the trail, toward where I'm going.

These next three are of the entrance to the Sandia Mountain Wilderness Area, about a half mile into the hike. 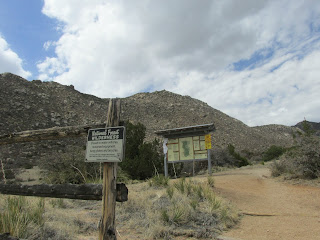 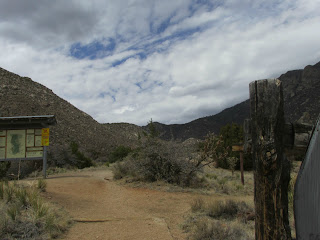 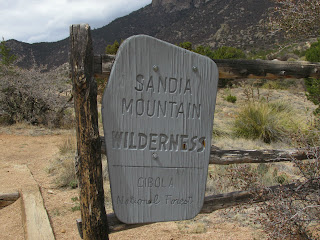 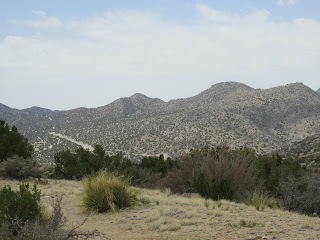 Some views on the way up 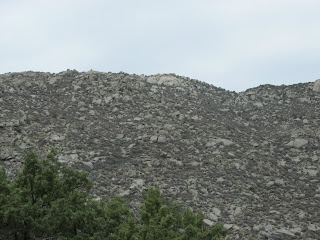 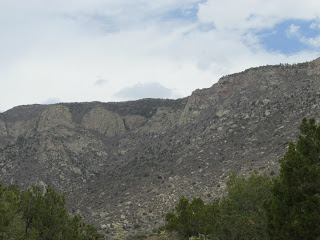 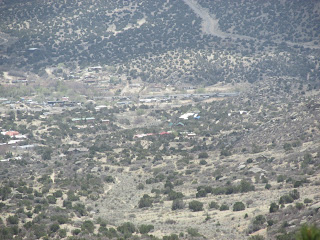 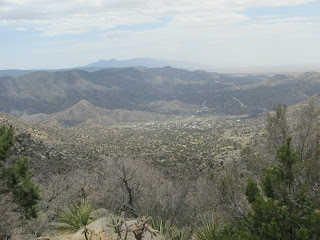 Don't know what I did to offset these; anyway, the two shots above are looking back down to the valley floor from near the top of the hike, showing where I had started.

These next shots were as I was coming down, nearing the bottom, looking back up to where I'd been 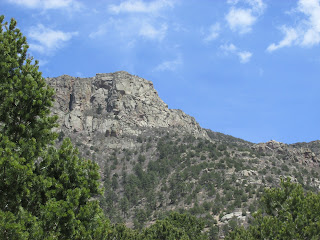 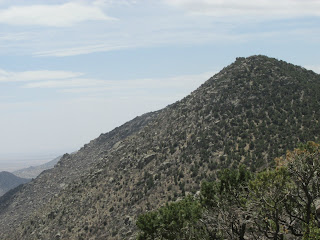 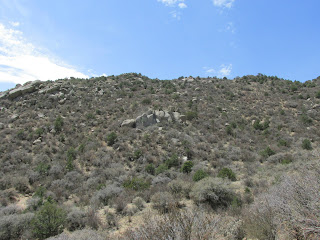 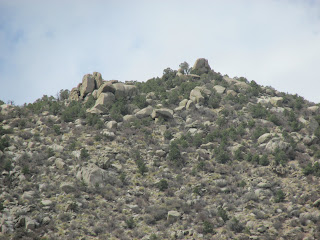