WOW!!  That's what I have to say about Durango!  Just WOW!  This place is beautiful!  The mountains with their lush green trees--no matter how beautiful the red rock mountains are that we've been seeing, we realized when we got to Colorado's tree covered mountains that we really are partial to trees.  Then the rivers around.  Anyway, just took our breath away when we drove into town.  But let me back up a bit . . .

We got up this morning and were enjoying our morning coffee and a beautiful sunrise through the leaves of the two aspens at our campsite, and had a wonderful phone call from our friend, Jim, in Utah. Since he and Sue Ann had spent some considerable time work camping in Montrose, CO when they were full time RVers, so we had sent him a message asking for some tips on hiking trails in that area.  Well Jim, you see, is just an amazing guy--he called us bright and early, since we had told him we typically are up at sunrise since we've been RVing, just overflowing with information on places for us to go, hikes to take--or not, since some of them, along with some of the drives, apparently are heart attack inducing!!  I was taking notes fast and furious, but Jim, of course, would not be content with just a brief summary--he said he's working up a list and itinerary for us,just like he did when we left Zion.  I mean, the man is just unbelievably nice and so knowledgeable.  And, even though it was 6:30 this morning, I'm quite sure he'd likely already put in some miles on the bike, plus a couple or six sets of pickle ball, just to work up his appetite for breakfast!!  And his laugh is just the most contagious thing--before I ever met him, Trisha had told me about his laugh, and it hasn't changed in the nearly 50 years I've known him.  What a friend!!

Anyway, we decided against going back into Pagosa Springs, so we just headed off to Durango, definitely a good decision.  Quite a pretty drive, though not really very far.  Trisha had seen a piece about a knitting store in Bayfield, along the route, so we stopped there.  Usually I like to go in these places with Trisha, but this morning decided to stay in the carhouse and catch up on some emails.  She said it was a good store, but the woman who owns it apparently is in the midst of cancer treatments, so she just had a couple of her friends minding the store and they didn't seem to know as much about some of the yarns and patterns Trisha was interested in.  When she came out it was noon, so we just opened the windows and fixed our lunch right there on the street in this quaint little town--that's just the coolest thing about traveling in the carhouse--we can just eat whenever and wherever we happen to be!  btw, I just realized why sometimes when I read my posts later, I see the word carouse--it's because when I type carhouse, my autocorrect feature doesn't recognize that as a legitimate word and changes it to carouse.  Sometimes I catch it but sometimes I don't.  Anyway, Bill Curtis, we're not carousing, nor are we in a cathouse!  LOL!

On the road we had another wild and crazy encounter with life on the range--this time it was a herd of cattle being driven by cowboys toward us on Hwy 160!  Not as many in this herd as there were sheep when we encountered them in New Mexico, but it was a hoot nonetheless!  Lots of young calves, and their mamas would stop and turn around to check on them if they lagged behind.  I guess there just are places where the trail the animals are on just flat out have to detour down the highway and the vehicular traffic just has to chill for a while, until they pass.  Just love it!!

Many folks had told us not to miss the narrow gauge railroad between Durango and Silverton, so I had called to make the reservations for tomorrow.  But we had not idea how many other things there are to do here.  As we drove into town, we followed the directions to the visitor center, and that took us down to the Animus River, a really beautiful, clear river that runs right smack dab through town here.  The visitor center is in this gorgeous city park, and there is a walking/running/biking trail along the river.  We went in to get brochures about the area, and there is really a lot of fun stuff here.  We had made reservations for 4 nights here--a bit unusual for us, as we've sort of taken the approach that we don't want to be locked into a place right off the bat, in case we don't like it or want to leave early, but we did it anyway today.  After we came out of the visitor center, we realized that we were right by the bike trail and could leave our RV right there, so we just unloaded the bikes and had a fabulous ride along the river.  It was a glorious sunshine filled afternoon, a bit warm, but not unbearably so, and being right by the river there were usually cool breezes blowing.  The trail is paved, though a bit narrow, and a couple of times got a bit crowded, but we thoroughly enjoyed it.  Trisha was excited to be able to ride so long without having to worry about vehicular traffic, and the river was full of rafters, tubers, kayakers, all having so much fun.  We saw some fun looking rapids and decided that we are definitely going to do a raft trip on this river.  Got a laugh, too, when several groups in rafts looked up at us on the bikes and hollered to Santa and Mrs. Claus!

After the bike ride we headed on through town to the RV park where we had made reservations--Alpen Rose--just a few miles out of town, tucked up into the base of some beautiful red rock mountains!  Well, just as we were driving in, even before I could get out to go into the office to register, two guys in golf carts drove up and they were the friendliest people!  Well, turns out they are with the park, and they came over, introduced themselves and started joking with us about being Mr and Mrs Claus, asking why we didn't bring Rudolph with us.  Then he looked at a sheet, found our name, and said Follow me, and escorted us to our site--right under this great big cottonwood; all the sites are shaded and it's just gorgeous!  Trisha said as we were driving in, Can we just stay here forever?  This is about the nicest RV park we've stayed.  And the folks all around us are really friendly and outgoing.  The man said, just go ahead and get hooked up, and at your leisure you can come to the office to check in.  So I got us hooked up, and then walked down to the office and met even more friendly people.  As I was telling them how impressed we were with their park, I mentioned that Trisha had said she'd like to stay here forever--and this man said Well what you can do is come work camp here--all our workers here are work campers.  Sounds mighty tempting!  We've kicked around the idea of work camping sometime, but still feel like we have a lot of traveling to do before we want to start doing that.  Anyway, this place is really really nice.

So, we were able to get reservations for a raft trip for Saturday.  Looking forward to the train trip tomorrow, and Friday we'll just hang around Durango, where we know we'll have cell service and be available when Shelley and her book club are going to Cherry Log to spend the weekend.  Since we turned off the water and shut down pretty much everything before we left, I'll need to walk her through how to get it all set up for their weekend.  But there's plenty of cool little places to see in downtown Durango so Friday will be another great day.

Realized that I didn't take too many pictures today--was just so excited about the bike ride I didn't stop too often, but here are a few shots from today.

Really cool rock formation near Durango.  I thought Trisha did a great job taking this through the front windshield as we were driving--no pull off place and too many cars right behind us to slow down or stop. 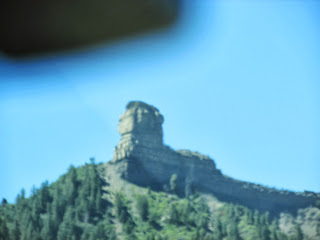 Here come the beef!  Quite a moooving experience, to tell you the truth! (Sorry, Bill Seman, couldn't resist!) 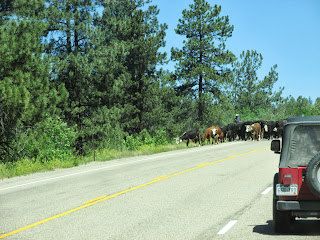 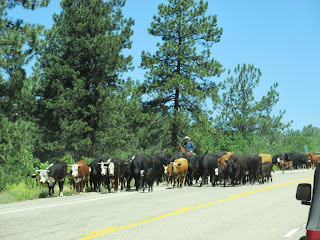 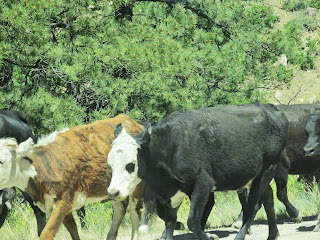 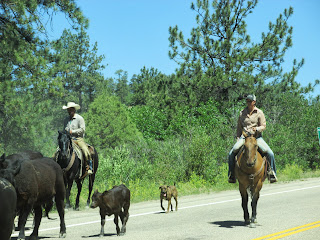 The fabulous bike trail along the Animus River 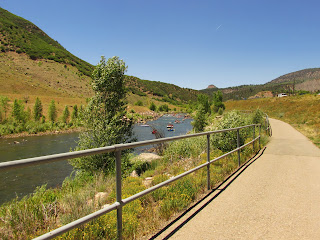 Can't wait to do this Saturday! 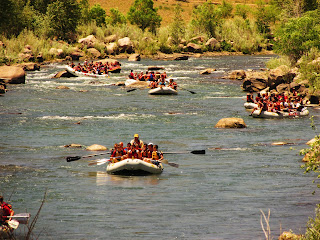 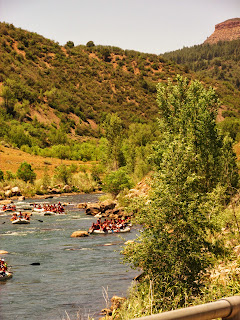 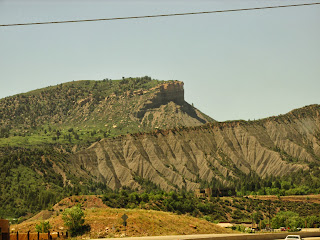