Woke up to some cooler weather in Santa Fe this morning, quite a relief, even though a bit windy.  Since we checked into the RV park after the office had closed last evening, I went to check in first thing this morning.  During the course of the conversation with the woman at the office, it came out that  we were both vegans--she said she had lost 120 pounds since she started this a hear and a half ago--that's simply amazing!  Anyway, after that Trisha and I found a bike path behind the park that went along the dry river bed, and we had a wonderful hour long ride.  Great way to start the day! It was also nice to have a breakfast smoothie again after several days without them!  We stayed in the same RV park that we did when we were in Santa Fe last week, and there's a wonderful natural grocery store just up the road, so we stopped by there on our way home from dinner and stocked up on lots of wonderful greens!

Got some laundry done and filled the propane tank, and we were ready to roll again.  As we stopped into the office to pay for the propane, Julie, the woman there I had talked to earlier, said she had something for us, and had printed out a list of vegan/vegetarian restaurants in the Santa Fe area--how nice was that??!!  So we looked at it and saw that there was one about 12 miles out of town, but it was on the road we were taking anyway.  Since it was near lunchtime, we decided to give it a try, and she had said we really had to get the fresh guacamole.  Well, folks, if you're ever near Santa Fe, you absolutely must go to Gabriel's.  And don't worry, all you carnivores, there's plenty of choices on the menu for meat lovers.  As you walk up, the sign outside says "Food of the Southwest and Old Mexico."  Then you walk in, and your senses are bombarded with the most glorious interior courtyard, bursting with huge hanging baskets of beautiful flowers, multiple smaller beds all around fountains throughout the courtyard sprouting every color of the rainbow.  Unbelievably gorgeous!  When we got the menus, we saw fresh guacamole under appetizers--prepared at your table side!  We were intrigued by the idea of guacamole prepared table side, so we ordered it.  The had already brought us some of the best chips and salsa we've ever eaten, and then a waitress showed up, pushing a big cart with a bowl in the center, and all the ingredients laid out around it--avocado, garlic, cilantro, pico de gallo, lime--and suddenly she started to work, like a whirling dervish!  I tried to take pictures but was only able to get one before she was finished.  She split a couple avocados, whacked the pit with her knife and pulled it right out, then scooped the avocado from the skin into the bowl, squeezed a fresh lime into the bowl, added the other ingredients and began using her whisk to mash it up and mix it, and suddenly there appeared before us a  big bowl of this luscious and luxurious guacamole.  And once we dipped a chip into it and put it into our mouths, we were both just stunned.  Neither of us have ever had guacamole this good, or this fresh.  We only wish son Jeremy could have been there, since he dearly loves guacamole.  The rest of the meal was delicious as well, but the guacamole was the star of the show.  If you are ever close enough to go, don't deprive your taste buds of this gustatory extravaganza!

Then on to the border, and into Colorado--the 10th state we've been in since leaving home.  We came back through Abiquiu, and today we stopped at a lovely little gallery that had some really interesting and beautiful things--including this lovely painting some artist had done from inside Georgia O'Keefe's house at Ghost Ranch, entitled "Georgia's View," showing a view of Pedernal through the window.  Then it was nice and nostalgic to drive past Ghost Ranch again, to catch a glimpse of Pedernal and the Chama River and the red rocks.  Just know we'll be back here soon.  As we got closer to the Colorado border and on into the state, the scenery began to change once again:  more trees, more grass, more green.  In some ways reminded us of Montana and Wyoming, but also more similar to the mountains we're used to back in the Appalachians.  Along the road, both of us were so excited to be back in the RV and on the road again, we remarked several times that, after being away for several days, it was like starting our trip all over again, especially since we're in territory we've not seen before.  Just overcome with renewed excitement about this great adventure we'r on!

Julie had told us this morning about Pagosa Springs--the naturally hot spring waters, the many public baths along the river, and it sounded really neat.  We got into town and went to the visitor center and got lots of brochures about the town and things to do in the area, but as we drove around it began to seem a little overwhelming--a bit too crowded, with tons of people in pools and  the river--just didn't seem quite as inviting as the brochures had made it out to be.  So we came on out of town to an RV park we had found, to browse the brochures and decide what we'll do.  Thought about doing a raft trip on the San Juan River, but when we called the outfitter, they said several of the sections and trips they had listed in the brochure were no longer available, due to the drought leaving the river too dry to run those parts.  They only had one opening for tomorrow on a trip that didn't start until late tomorrow afternoon, and it didn't sound as fun.  So we'll try to find some hiking or biking places tomorrow and then figure out what our next move will be.  Anyway, we're now nestled into a lovely little site, with a couple of quaking aspens alongside the RV and the river in the background--not too shabby! 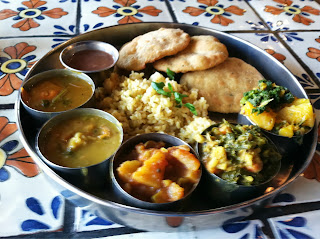 Tableside, fresh guacamole being prepared by our waitress at Gabriel's, just outside Santa Fe 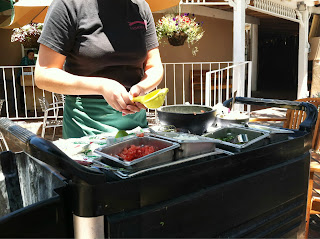 The finished product--trust me, this bowl was completely empty in very short order! 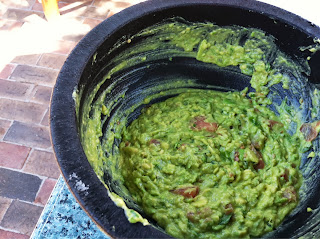 Some of the gardens and the courtyard at Gabriel's 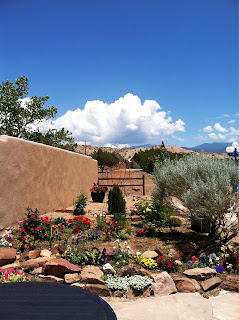 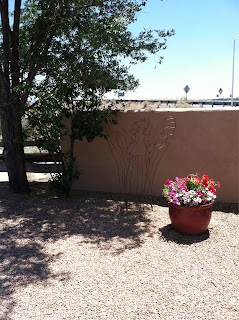 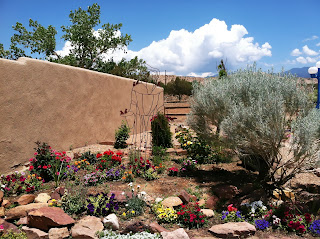 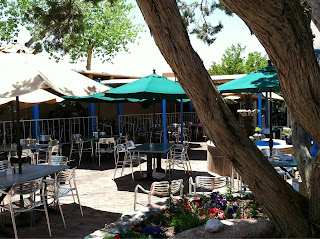 This lovely old tree outside the gallery in Abiquiu 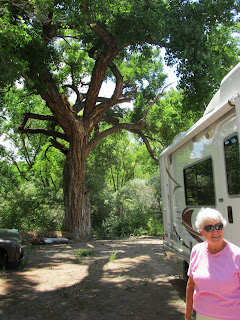 As we were nearing Ghost Ranch 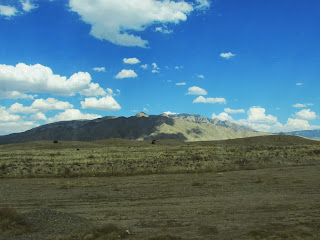 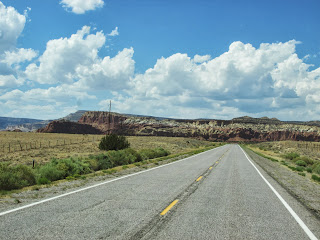 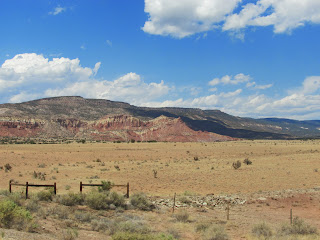 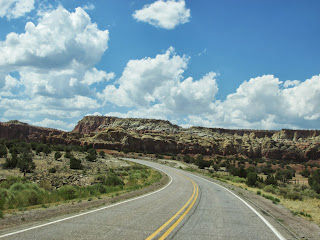 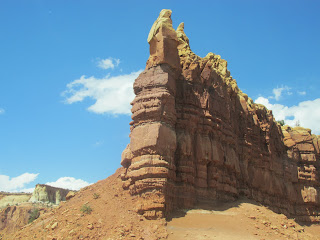 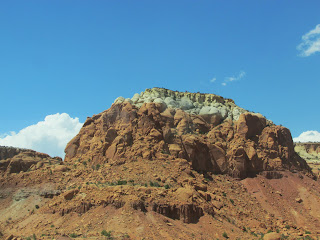 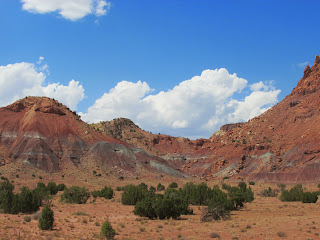 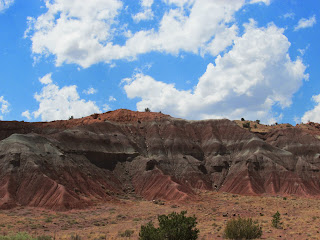 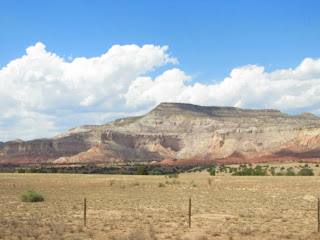 As we're coming into Colorado, and nearing Pagosa Springs 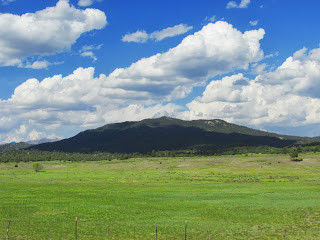 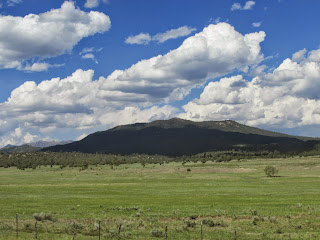 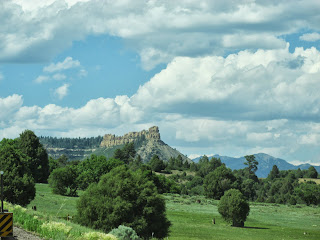 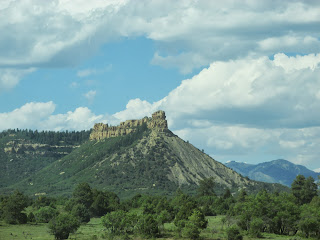 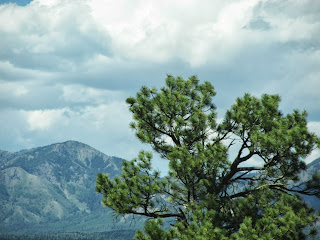 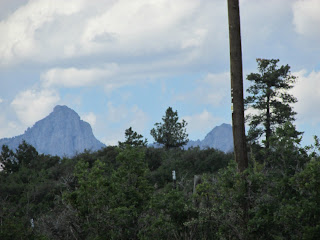 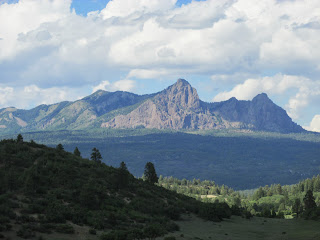