Nanaimo and last night in Victoria

Tuesday morning broke with the appearance of another cloudy, overcast day, but soon the sun started breaking through and it turned out to be another gorgeous, sun drenched day, as we left Parksville and headed back to Victoria.  How great it's been that we've been so fortunate to have so much wonderful weather to enjoy as we've visited so many wonderful places!

We stopped in Nanaimo, a city along the coast between Parksville and Victoria.  This is a wonderful city that has lots to offer, though we didn't have as much time here as we would have liked--next trip!
But we did get to see the one place we really wanted to see there--a yarn shop Trisha had seen in one of the tourist magazines with a wonderful name--Mad About Ewe!!  How clever!  They had wonderful yarn, and Trisha found exactly the yarn she wanted for her next project for someone's new baby expected in a month or so.  Plus the woman in the store helped Trisha figure out how to modify the pattern on another project she'd been working on so that it will work more to her liking.  The folks were really nice there, and she had a great time.  When the woman was ringing up the sale, she asked if she could take our picture under the shop sign--to show that Santa and Mrs. Claus had come to their store!! So funny.  She also recommended a Greek restaurant just down the street where we had a fabulous lunch.  They had wonderful hummus, and we each got a Greek salad--an authentic Greek salad, horiatiki!  So often in America when you see Greek salad on the menu, it's still basically an American salad, meaning lettuce and tomato, with a couple of kalamata olives and a little feta thrown in.  But in Greece, you'll never find a salad like that--the real Greek salad has just tomatoes, cucumbers, onions, green peppers, kalamata olives, feta, and and no lettuce.  We had so enjoyed these when we were in Greece, and it was so wonderful to get a true Greek salad.  Plus, this restaurant is in an old house, and the woman at the yarn store had suggested that we ask for the seat in the bay window in front, and it was open, so we enjoyed that, too!

When we had finished lunch and were paying, I asked the woman if there were a Serious Coffee store nearby, as we had seen these stores and were just taken by the name.  So she directed us to a location a few blocks away where we could sit outside.  So we walked over there and enjoyed some fabulous decaf espresso, sitting out in the glorious sunshine and watching all the people walk by, and looking at the beautiful flowers that predominate everywhere you go here.  As we were walking back to the RV we saw a billboard advertising Serious Coffee, and it said "only on the island" on the ad, so maybe this is a brand unique to Vancouver Island, but it really was good!

Got back to Victoria late afternoon, and came back to the same RV park where we'd stayed before.  This time, though, they had a site for us that was the ultimate, much better than where we had stayed last week.  While last week we were on the water, it was sort of along the channel where the float houses and boats were, but this time we had a site on the bay, where we could look across the water to see downtown Victoria!  It was just super, so we sat outside, relaxing and enjoying the view of the city, seaplanes taking off and landing, ferries going by, Canada geese swimming along the shoreline and folks kayaking, canoeing, paddle boarding and a couple on these bicycle boats.  We sat out and just chilled as the afternoon wore on into evening, and then had our supper at our table right by the water.  Even as it got chilly after the sun went down, the lights of the city, reflecting off the water, were just a magical site, and we had such fun just watching!  We're definitely coming back here, and hopefully can get the same site next time!

So this morning it's off to the ferry soon and heading back to Washington, then we'll get on the road down through Oregon and on to Boise, Idaho to spend the weekend visiting some good friends who moved there from Cherry Log.  Though we've got a good bit of driving ahead, this will be a fun weekend! 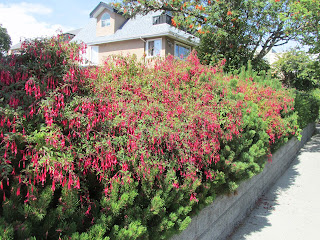 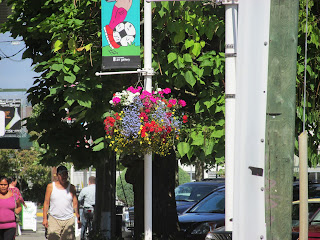 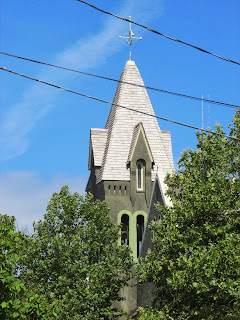 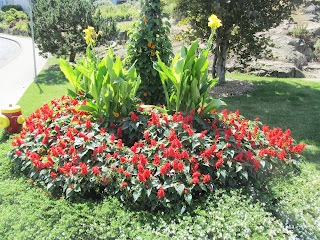 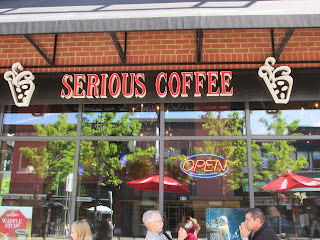 Now that's a serious cup of coffee--er, I mean a cup of Serious Coffee!!  Indeed, it's both!! 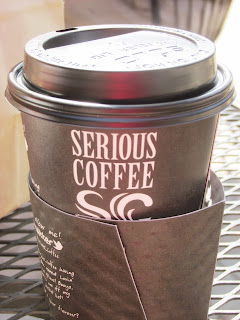 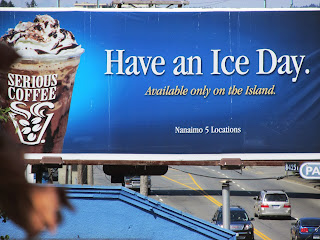 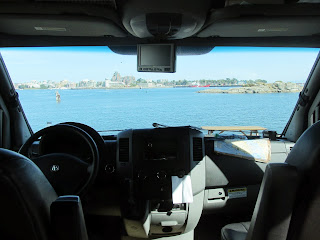 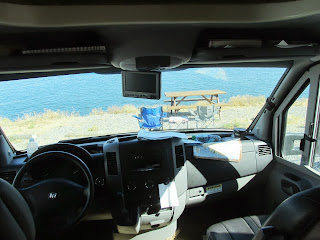 Looking across the bay as we enjoyed the late afternoon 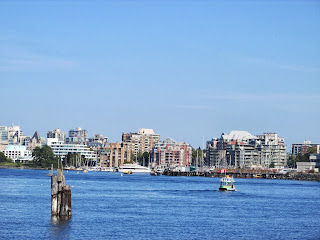 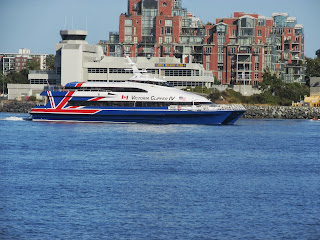 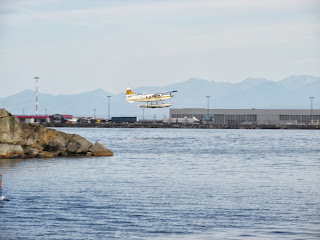 The Coho, leaving for Port Angeles--this is the ferry we'll take later this morning 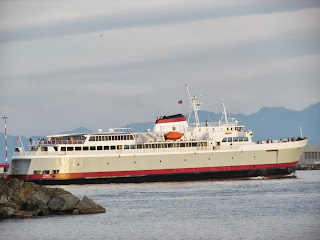 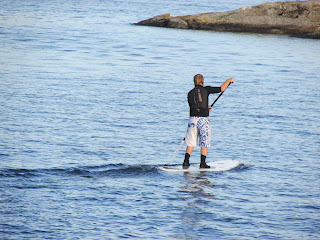 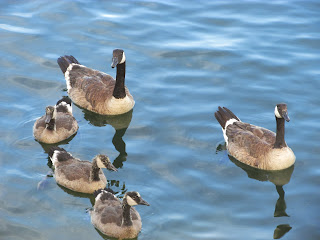 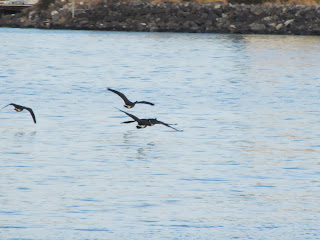 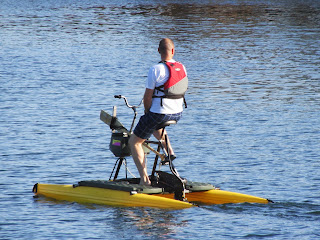 Dinner on the bay--doesn't get this better than this! 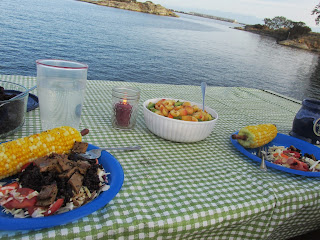 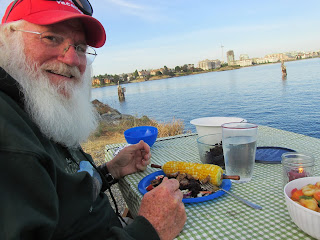 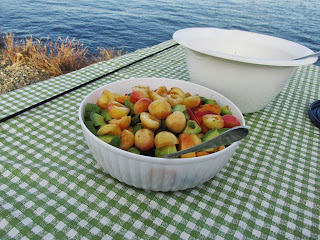 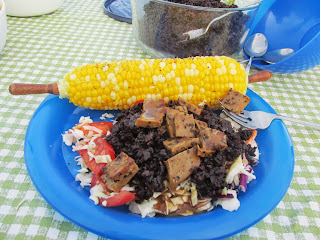 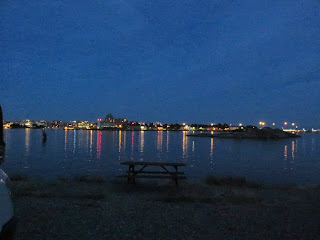 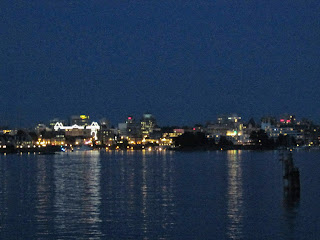 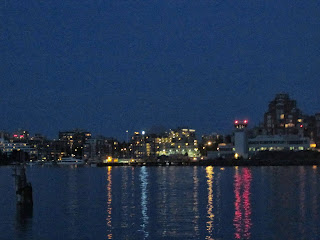