Wednesday we did this scenic drive loop from Munising around through Marquette and back to Munising, before heading on to Grand Marais.  As it was pretty overcast and raining for much of the morning, the views along the lakeshore were a lot different from the day before--not as much of a long view looking out over the lake, but, you know, it was still cool.  What we've found along this trip is that, even though there have been some places we'd surely call our favorites, if you just look at any place with an open mind, every one of them is beautiful in its own way.  So it was really kind of nice seeing this area from this perspective.  We have been so fortunate to have had sunshine so much of our trip, with very few days where we ever felt rained out of doing  anything we wanted, so it was a cozy drive in the old carhouse!!

The first stop on this drive was just up the road from Munising--Christmas, Michigan--of course we were going there!!  It's just a small little village, really, but there's a Christmas store right as you come into town with a huge wooden Santa outside.  The store owner is this really nice lady whose husband also is a Santa.  He wasn't there this day, but we visited with her for some time and had a good time there.  Got several little decorations there, including a cute little Santa to add to our collection!  But the cutest things in the shop weren't for sale--her three adorable little Shi Tzu doggies!  Trisha went crazy over these dogs--still wrestling with the longing for a little lap dog vs. the knowledge that it would make our travels somewhat more complicated.  Anyway, it was a fun stop.

Marquette was the next stop--saw a nice bike trail along the lake as we came into town, but the rain made a bike ride a little less attractive on this day!  But we found a wonderful natural foods store and were so excited that they had some more of these luscious huge dried figs, as well as some other goodies.  We had seen a blurb in one of the tour guidebooks about a vegan Indian restaurant where we planned to eat lunch--turns out it was right next door to the market--but, alas, it had closed since the writeup was done.  So we just stopped in at our own little vegan place--Chez Carhouse--for lunch, and it was delightful!  The wonderful thing about this little cafe is the beauty I get to see out the window--and across the table!!

On the way back to Munising the rain began to get really heavy, so we pulled into a casino parking lot, let out the slide, dropped the sofa into the bed position and took a nap until the heavy rains passed--just a cool thing to be able to do!!  As we drove back into town, we stopped at this funky little house that's a pottery shop and art gallery--we had seen it the first day we got there but didn't have time to stop then since we needed to get to the boat tour.  As we drove up, we saw that they had a wonderful little garden outside the shop and as soon as we walked in just knew it was our kind of place.  It was another artist collective, with the work of about 40 different artists working with lots of different materials and media.  The owners were a couple who were so nice and easy to talk to--she's a fabric artist and avid knitter, and he's a potter.  He was working on some pots he'd thrown, dipping them into some red glaze that he explained would turn into beautiful hues of blue and green once it was fired, due to the different mineral content of the glaze.  Fascinating to listen to him explain how he comes up with the different mixtures to get different end results.  As we chatted with them, we were not surprised to learn that they knew Ray and Tami Bier, the potters who have the beautiful schoolhouse gallery in Charlevoix--just seemed like the same kind of folks.  Trisha was taken with the lovely rocks she had all over the shop, some used to craft mirror and picture frames, some just as decorations for their displays of other artwork.  She told us that all of these rocks came from the shores of Lake Superior, and said we definitely needed to go to Grand Marais, as that was a prime location for finding beautiful rocks.  Well, any of you who know Trisha well know that this was all she had to hear!!  She absolutely loves to look for interesting rocks to take home to adorn our labyrinth and just to have all around the house.  Right before we left someone gave us a cartoon that was so apropos--showed a couple in an RV, wondering why it would not move forward, until the wife admitted that she had collected so many rocks and loaded them into the back of the van that the front wheels were off the ground--too funny!

So off we went to Grand Marais, and fortunately the rain stopped for us as we came into town.  We went down to the shore and had a blast picking through all these interestingly shaped and colored rocks washed up onto the beach.  After we had all we could carry, we came back into town and found a lovely site at a city park, where we could watch the lake as we ate dinner--just gorgeous!

Thursday was a day mostly for driving, as we headed south to Flint, where we spent the night, and today will drive east through Port Huron, cut across the southern tip of Ontario and then reenter the US in Buffalo.  Stopped to get the tires rotated at a shop just on the outskirts of Saginaw--and what was running through my mind the whole time was a line about Saginaw from Simon and Garfunkel's song,
’michigan seems like a dream to me now’
It took me four days to hitchhike from saginaw
I’ve gone to look for america.

Funny how some songs just stick in your mind, but I remember so well so much that was happening when that album came out.  Never thought I'd see Saginaw, but here we were!  Anyway, the last time we got the tires rotated was in Seattle, right before we left, and it's hard to believe that we've come 6000 miles since then!  Even more amazing to realize that today we'll pass 19,000 miles since we've been on the road.  What an incredible trip and still more to come.  As we were driving yesterday we were seeing more and more turning leaves and just getting more and more excited about seeing more of fall and its beautiful showy colors from here on out.  We were also reflecting on the fact that now, having been in so many places, we'll be able to relate more to news items about particular places, or have some familiarity with a place someone mentions.  Like the other day when we met the couple from Ontario and he was describing the route to take if we were to go to Thunder Bay--he mentioned taking Canada's Highway 17, and I could remember driving on part of that road when we were on Vancouver Island.  Just amazing!!

Anyway, just a few pics from the last day or so:

Seagull outside the RV at the park in Munising 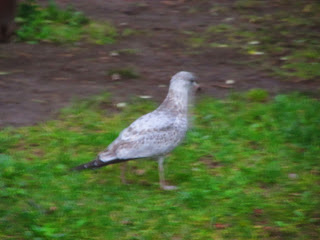 Here we are coming into Christmas!! 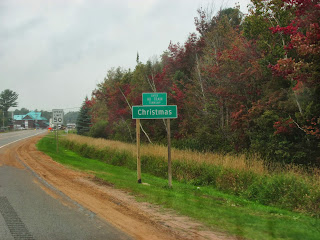 Gosh, before we started eating a vegan diet, I was about as big as this Santa!! 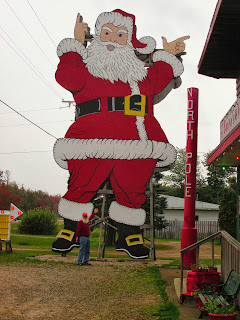 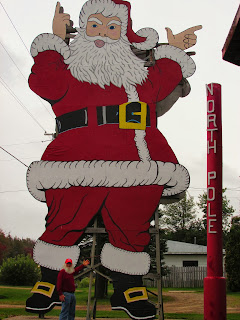 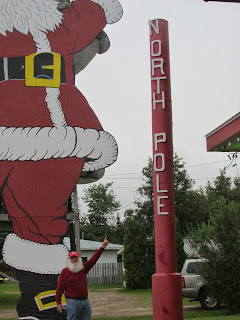 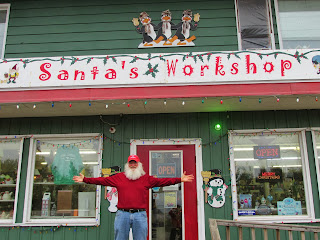 Oh, how Trisha wanted to just sneak one of these babies into her purse! 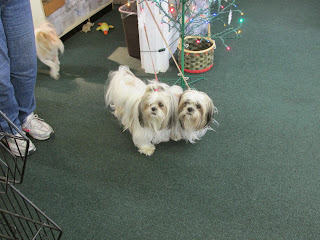 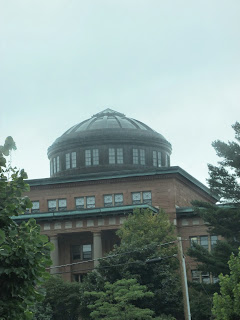 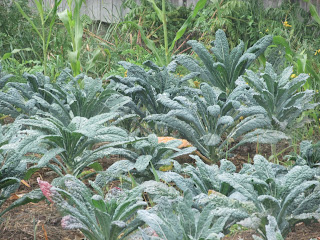 Here are some shots from the land side of Miner's Castle, the place we had photographed from the boat tour, and now were seeing from land 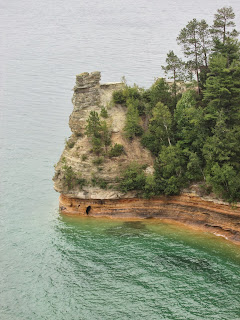 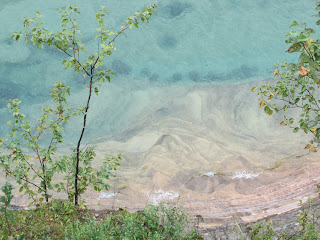 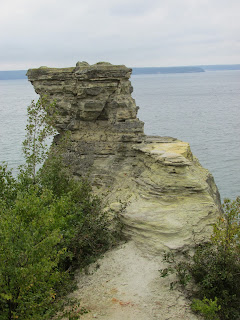 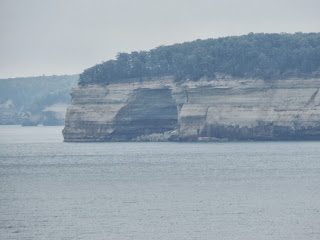 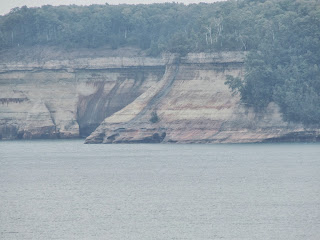 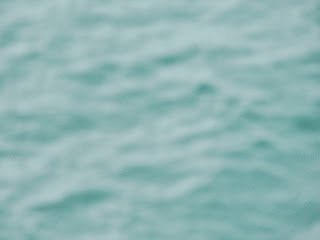 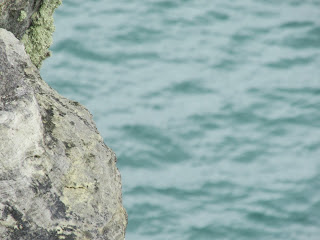 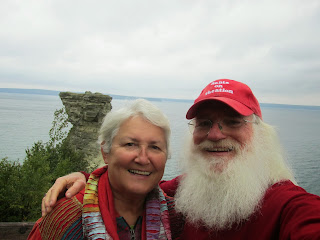 We just had to get a picture of a sign advertising "pasties!" All over the UP we saw these signs, and it just cracked us up, since we have always called baked goods "pastries," while the former term has always been more associated with the type of performance artists known as ecdysiasts than bakery!! 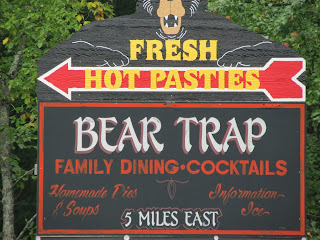 Here we are on the beach at Grand Marais, with a little lighthouse in the background 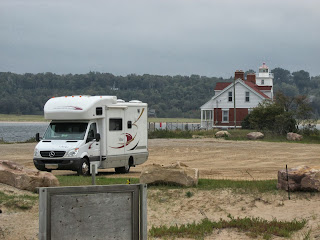 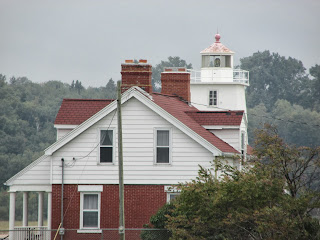 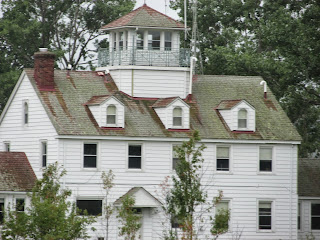 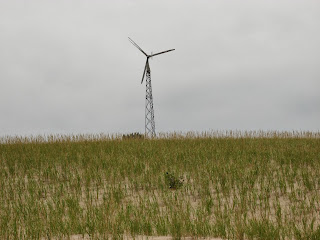 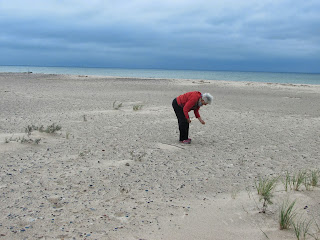 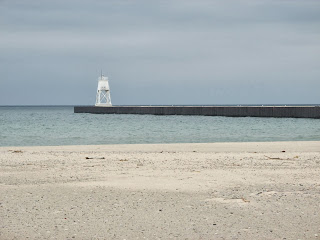 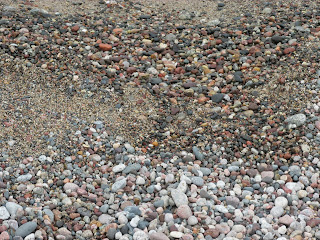