Pierce Stocking Scenic Drive and on to Petoskey

Friday morning when we woke up it seemed a bit overcast, and was quite windy, after the rain overnight.  So we thought it was shaping up to be a cloudy day, but it didn't take long for the sun to come creeping through and make it another bright and glorious day!  Since it was a cool day, we dressed in long sleeves and jeans, rather than the shorts we'd been wearing for so long and it felt good to be gearing up for fall!  First up this day was to take the Pierce Stocking Scenic Drive, a lovely loop drive in the Sleeping Bear Dunes with several overlooks for great views of the dunes and Lake Michigan.  Although it was quite nippy with the cool temps and the wind, it was great to stop along the way to see some pretty awesome sights.  The different colors of the lake, varying in shades and hues depending on the depth of the water at different points, was just spectacular!  Just brilliant blues and turquoise all lit by the bright sun--really wonderful.

One of the overlooks was particularly outstanding, as you hiked up a small dune to a stunning 450 ft. dropoff down to the water's edge.  As you crested the dune, it was as if you were about to step off into eternity!  Don't think the picture we took does it anywhere near justice, but it was a great scene as we came up on it.  Then we hiked on up another small rise and there was a little platform where folks could stand to take pictures.  While we were on this little platform, we asked this man if he would take our picture--he had a rather impressive camera hanging around his neck, but he had a bright smile on his face and seemed very approachable.  Well, we were right about that!  He had a twinkle in his eye as he said of course he would, and when we said all you had to do was press the little silver button, he jokingly said, so this is one of those PhD cameras?--Push Here Dummy!  Well, as he took the picture he began talking and was so engaging, telling us that he was here with his son on their annual "walkabout."  He's 84 years old and his son is a music professor at Cedarville University in Dayton, OH, and also a water color artist.  His son has been taking trips to places he wants to paint for years, and his dad explained that since his wife died several years ago, he's been going along.  Just a delightful fellow and we had such fun talking with him, as well as his son.  He told us about the various places he's been painting in the area, before they head back to Ohio to start the new school term, and how on these trips with his dad he goes off to paint and his dad finds someone to talk to--which isn't hard at all for him.  Turns out he spent most of his working life as a janitor, and then took up photography after he retired, and his son said he has become quite a successful professional photographer--really an interesting story.  As we were walking back toward the parking lot, another couple was walking along beside us, and soon the older gentleman fell into conversation with the woman while Trisha was talking with the professor.  So I got to talking with this woman's husband, and it turns out that he was a retired locomotive engineer, spending most of his career with Amtrak, but working for a time with CSX!  Since that was the railroad that was my primary client while I was with the law firm, we had a lively conversation about railroading--great fun.  Turns out his wife has family not too far from us in Georgia, so we exchanged contact info and maybe we'll see him down there sometime.  Meeting people has been one of the most enjoyable aspects of this adventure, and we've collected a whole bunch of cards and contact information for folks from all around the country!  Just absolutely love it!!

Then we headed on to Traverse City, where we planned to take this little detour out to Mission Point Lighthouse, mainly because the professor/artist had told us about coming out there earlier in the week to paint.  Along the way we saw this little self serve, honor system produce stand--there are a whole lot of these little stands along Highway 31 in this part of Michigan.  This one was particularly attractive and we just love these self serve stands.  It's so nice to see places where trust is still a theme, and boy did this place have wonderful produce!  We got wonderful tomatoes, squash, peaches and delicious Zestor apples.  In their garden they had vines still just overflowing with tomatoes, and two of the biggest pumpkins you've ever seen!  And you just put your money in this little box and you're on your way.  When we got to Traverse City we knew we needed to find a health food store to pick up some smoothie ingredients we were running low on, and, boy did we find the best store--Oryana Natural Foods!  It was clearly the best health food store we've found on the whole trip.  The one we had found in Moab, Utah had held top honors up until this stop, but this place was just incredible!  They had everything we needed, and such a variety and selection of natural and organic foods, lots of bulk items so you could get just the amount you wanted, and the most exquisite dried figs we've ever tasted!!  They were the biggest figs, and when you took a bite, you just found yourself coming out with sounds like those that inspired the classic Billy Crystal line from When Harry Met Sally!!  I mean these are just out of this world!  This place was just a gold mine for wonderful foods, and we got all we had room for and left as very happy campers!

The drive out to Mission Point Lighthouse was really beautiful, it's on this spit of land that extends out into the lake so you have views of the water on both sides of the road.  We passed lots of orchards, and also lots of vineyards--never knew Michigan was such a wine producing state.  The lighthouse was not quite as impressive as the one we had visited in Ludington State Park, but still was very interesting.  Then on to Charlevoix and Petoskey, where we planned to spend the night.

We had planned to spend some time in Charlevoix, since we've been seeing all these lovely pictures of this quaint little town on facebook by our friend Pat Russell who spent some time there this summer.  Well, a funny thing happened on the way to Charlevoix--one of those remarkable serendipitous things that just happen from time to time, and seemingly a number of times on this trip.  We passed this wonderful old red building that looked to be a schoolhouse, but we almost missed it.  We noticed that it was now a pottery and art gallery, and, since it had an open sign out front, we found a place to turn around and come back to it.  Boy are we glad we did!  It's hard to describe how this place affected us, but as soon as we drove up to the building, we both just felt something special.  As we went in, the proprietor greeted us and he was just the nicest, most gentle man, with a remarkable peaceful spirit about him.  He reminded us so much of our friend from college, Bill Seman, and there was just this instant connection.  He told us of how he first visited a potter when he was a small child, and the man put a lump of clay into his hand and said, "Son, what you're now holding in your hand is gray gold!" and he was hooked.  He's been doing this since he was 10, and his wife and son are also potters.  He told us about how this building was a schoolhouse from the 1870's and how he and his wife bought it to bring to life their dream of having a pottery and gallery, and now they have built their studio out behind the main building.  His son has made some really unusually shaped bowls and pots, but the most remarkable things were the nativity figures his wife made.  They are not your traditional figures, but are whimsical, with big expressive hands and the sweetest faces, on the animals as well as the people.  We collect nativity scenes and we would love to have one of hers, but the whole set is just so big we don't have space to display it.  But we did come away with an angel and a shepherd with a little sheep.  Just precious!!  Anyway, we ended up staying there most of the afternoon, and I'm sure they were probably past their closing time.  But they insisted we stay as long as we liked, and each time we'd comment on a  piece, they would say things like I'm so glad you appreciate that artist's work.

Anyway, by the time we left and drove into Charlevoix, it was way past closing time for all the shops, so we drove on to Petosky, where we spent last night in a casino parking lot.  This is such a hoot, that you can stay for free in most casino parking lots, but it's quite nice to have a free spot!  Today we'll plan to take a bike ride along this wonderful paved trail that leads out of town before heading on toward Mackinaw Island! 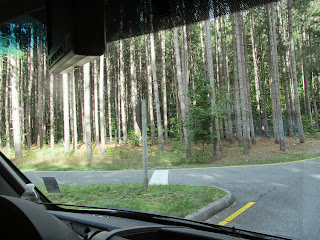 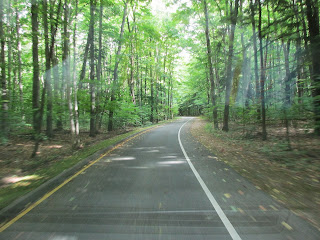 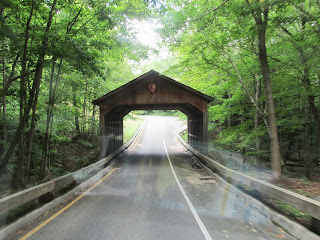 The same barn we'd photographed before, as we were driving into Sleeping Bear Dunes, this one from an overlook 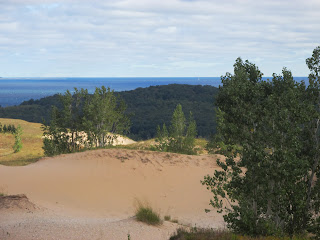 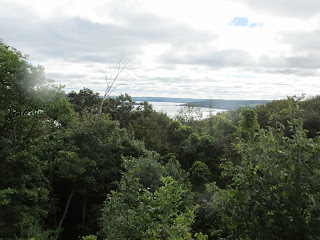 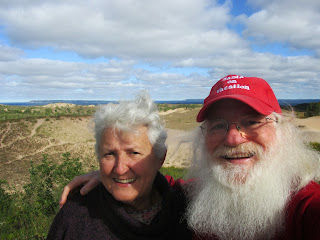 Coming up the crest of the dune, to the drop off

This taken by our new friend, the janitor turned photographer!

The dunes, along the shoreline

With my new friend, Tom, the RR engineer! 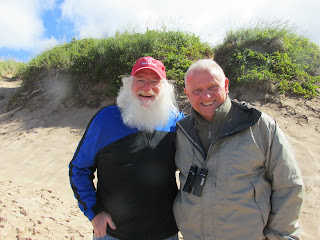 The pumpkins, in the garden at the self service produce stand, were probably about 20" in diameter!

Look at all those maters! 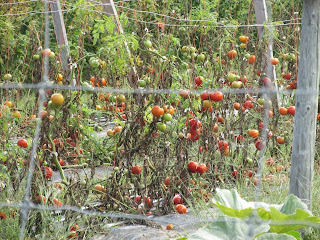 On the way to Mission Point Lighthouse, orchards

Love these barns with quilt squares

We figured this multicolored barn roof was probably a paint co's experimenting with different colors, likely in exchange for the farmer getting a free roof! 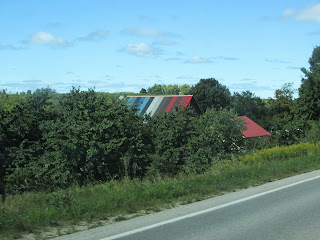 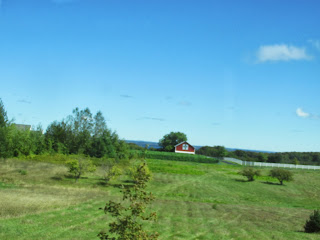 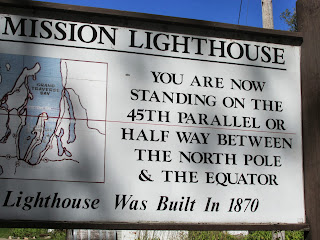 This field of rocks was between the lighthouse and the lake--where they said that, in the early spring, before all the tourists have picked them over, you can find Petoskey rocks, the Michigan state rock, that has this unusual pattern of circles in it. 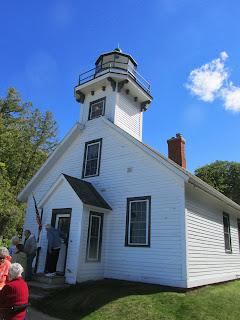 Stuffed snowy owl in the lighthouse display, found nearby 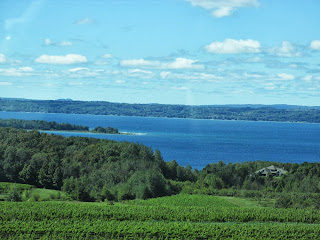 Iron sculptures on the roof 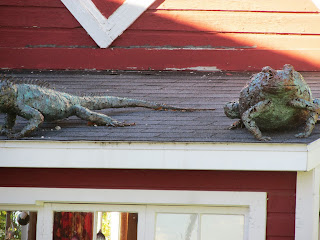 Tami, in her studio with some of the nativity figures she was making

The waterfront in Charlevoix 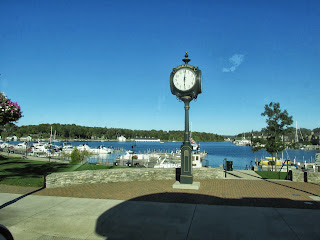 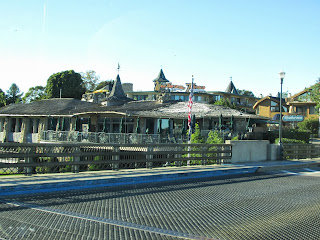