Last Wednesday was a day of running some errands, and just chilling out, but in the Apostle Islands, I'm telling you, just being there is quite wonderful!  As we drove from Bayfield into Washburn, we stopped at Coco's Cafe to have a cup of coffee.  We had heard about Coco's from Myra, this delightful woman we met at the Big Top Chautauqua booth in Bayfield the first day we got to town.  She is from the Chicago area, but has been coming to the Apostles for the summer for a number of years since her husband died, and she is a veritable fixture in the area.  The first day we met her she told us about Coco's, and how their pastries were to die for.  Well, we figured that this would be a place we would have to pass on, but a couple days later I was scrolling through the Happy Cow app to look for vegan friendly places to eat, and came across Coco's.  So we figured we had to check it out, and boy was this an unexpected and delightful surprise!  As we looked over the menu we saw many items that were vegetarian, with a detailed description of all the ingredients, so all you had to do is ask them not to include the non-vegan ingredients--a really great way to do it.  Since it was mid-morning, we had the most delicious vegan date nut bars with so many seeds and goodies--just mouthwateringly delicious!  While we were ordering, we told the woman behind the counter that Myra had recommended the place, and she said "Oh, everyone knows Myra!"

As we were enjoying our treats, Trisha noticed a beautiful stone bracelet on the arm of a woman sitting at a table near us, and when the woman looked up, she commented on it.  Well, this woman was just the nicest person, and she came over to our table to show it to us and told us how she had been to this stone jewelry designer just around the corner.  We had tried to go there a time or two before, but she was only open at times when we were not in Washburn.  Anyway, we had a wonderful visit with this woman, who told us she was from Annapolis, MD and her husband was here doing genealogical research on his family's ancestors, who were from Washburn.  So we drove on to Ashland, a little farther down the road, and then to Ironwood, which is just across the line into Michigan, to take care of a couple of business things we had to do, before heading back to Bayfield to just hang out at the campground.  We were anxiously watching the weather forecast for the next day, as we were scheduled to go kayaking to the sea caves, but the website warned that if the weather was not right, they would take you to an alternative site, on a river, and we had seen so many pictures of the sea caves that we were really hoping that it would work out.

Well, Thursday morning came and the weather couldn't have been any nicer!  It was not only bright and sunshine filled, but more importantly, the winds were quite low.  So we eagerly drove to the kayaking company and met the owner as she checked us in, just a delightfully cheerful and energetic woman.  We got our wetsuits on and our guides gathered up the group for some introductions and we realized that, other than one other gentleman who appeared to be somewhat older than we are, we could easily have been the parents of everyone in the group!  And everyone else had more kayaking experience than we did.  But the two young guides, both about our son Jeremy's age, assured us all would be well.  One of them had red hair and a red beard, and really made us think of Jeremy, and the other one was the spitting image of Jeremy's friend Wil.  We all then piled into the van for the 15 minute ride to the put in point, where we got some orientation and tips to kayaking strokes, and how to keep from tipping over our boat--fortunately, no one had that happen!

It was just a glorious day and we had such fun, exploring the caves.  It was so cool to see them from the water--all along the sandstone cliffs where the water had carved out the caves over thousands of years you could hear the water making these deep gurgling sounds as it carried deep into the caves and echoed back out.  The guides took us back into some of the caves and we went through lots of little archways.  In some places it was too narrow to paddle so you had to put the paddle down on the boat and use your hands to sort of walk your way through the little tunnels and passageways.  It was just so fascinating and cool to be in this labyrinth of little tunnels and caves.  It was quite easy to understand why they don't take you into these caves if the winds are high, as heavy winds could just smash you into these rocky walls and could be really dangerous.  So we were thrilled that the weather was so nice and we could go back into all these caves.  I tried to take as many pictures as I could, but trying to keep the camera steady and paddle too was a trick I never really mastered, so I didn't get nearly as many pictures as I had wanted, but some of them will give you some sense of how beautiful it was.

We paddled for 2 or 3 hours in the morning, before pulling into this little beach for lunch.  The guides had strapped a bunch of gear onto the various boats, so they pulled out this little fold up table, spread a tablecloth and laid out a wonderful lunch of sandwich wraps, carrots, hummus and fruit.  When I had made the reservations, they asked if we had any special dietary needs, and they were glad to provide a vegan alternative.  So we had a delicious black bean wrap along with our fruit--really hit the spot.  After lunch we paddled back, with some time going out away from the shoreline into open water, and then back into some more of the caves.  It was just so gorgeous and so exciting to be seeing all these places, though we were both quite worn out by the time we got back to the place we put in.  Since the only time we've ever been kayaking before was some 15 years ago when we did sea kayaking in the San Juan Islands--and that was only about a 2 hour trip--this trip of 5 or 6 hours paddling was really pretty taxing.  But it was a good tired feeling and our guides were so much fun.  One of them had been an anthropology and history major and has been leading these tours for 6 years with this company, so he was really knowledgeable about the Apostle Islands.  The other guide, the one who looked so much like Jeremy, had been a kayak tour leader in Norway and Sweden for a couple of years, before coming back to the Apostles, where he had spent much of his college summers.  So they really made it a fun trip.  Once we got back to the put in point, we had one last challenge--to haul the boats and gear back up the stairs from the water to the van and trailer--boy were my legs like jelly by this time!!

After the trip we drove back downtown and went to the same rooftop bar for a beer to relax, and get one last view of the Bayfield harbor as boats were coming back in for the night.  When we walked back to the marina where we had parked the RV, there was an identical model to ours parked next to us.  As we got in, the man came out of his unit and chatted with us for a bit--there is just this instant connection and camaraderie among owners of this same model, so every time you pass one on the road, everyone always waves, and if you're ever close enough to park, we always chat with the owners.  So we had a nice little chat and then drove back to the campground to take a nap, as we were really feeling tuckered.  We decided to go out for dinner on our last night, so we went to Maggies, a local favorite our guides recommended.  As we were sitting in the bar waiting for our table, in came the owners of the other View we had seen just a little earlier.  So we met the man's wife and were swapping stories of where we had been, and they have been to a lot of the same places we have, and turns out we may even have been at the same campground in Moab, Utah at the same time!  What a coincidence.  At one point, we remarked that we try to stay off the interstates and out of cities wherever possible, and they said they do the same, and we realized we had a lot of interests in common.  Well they called our number so we went into the dining room where they seated us at a table for 2; after we had ordered, this couple was ushered in to a 4 person table just across from us, so he came over and invited us to join them for dinner.  What a wonderful evening we had, comparing notes and getting to know them.  They were such delightful people, from Ventura, CA, just north of LA, and they had just retired as well.  They were 2 months into their around the country explore, and are following much of the same general route as we are.  They plan to end up in Florida around Thanksgiving, then will leave their RV there and fly back to LA for the holidays with family and then fly back to Florida to continue their adventures.  So we exchanged contact information, and their schedule will likely put them in Georgia in early November, so they plan to come visit us in Cherry Log.  This has been one of the great things about this trip, meeting lots of wonderful folks--just so much fun!  And what a wonderful way to spend our last evening in the Apostle Islands!

Getting all suited up in our wetsuits!

The group at the put in point, as we were readying the boats for launch

Now we're all tricked out in our splash skirts!

Eagle Island out in the distance, as we loaded up

Our guides, Tim on the left, Ben on the right

Here we are,coming to the first of the caves

Heading back into the caves!

Pretty cool sight, from inside the cave 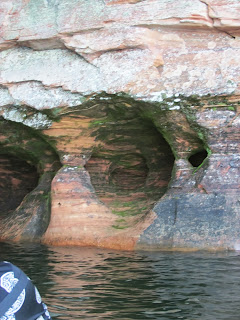 Pretty dark back up in there!

Our trusty guide, Ben, leading us into another cave!

A lot of these rock formations, with the red sandstone, reminded us of the canyons in southern Utah, but with water all around here 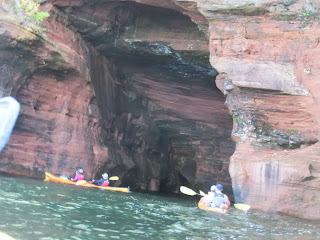 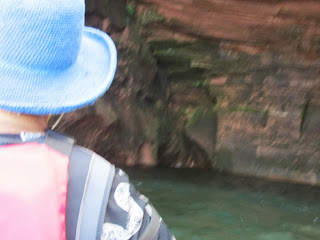 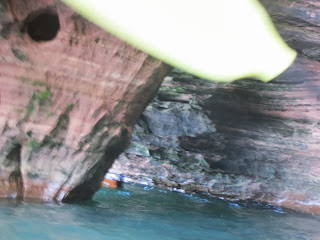 Birds-eye view from inside one of the caves

A lot of these sandstone layers were quite thin

A great day with these two wonderful guides!  Thank you Tim and Ben!!

Relaxing view of the harbor from the rooftop bar