After our return home from Sarasota, we had some great times visiting with lots of friends, old and new.  The first weekend we were back we hosted four of our dear friends from Atlanta, Jon and Joyce, Ebb and Lois.  Ebb and Lois and I first met when I returned to Vanderbilt Law School after a 3 year unplanned semester break for a visit with my Uncle Sam.  Ebb and I were in a study group together and became fast friends.  He and Lois transferred to Georgetown after first year, though, so we didn't reconnect with them until we moved to Atlanta after graduation.  Jon and Joyce both joined the same law firm where I worked a year after I started; though Joyce moved to another firm and eventually to the Bankruptcy Court where she had a distinguished career as the Chief Judge, Jon and I were partners for many years until we retired.  We've all gone through a lot together, some happy times and some tough times in each of our lives.  As we are all now retired--well, Ebb is almost there--reflecting on all that we've shared, it's so wonderful to have good friends with whom you've shared so much through the years.  Since we moved from Atlanta, over the last few years we've rotated hosting long weekend gatherings where we reminisce about old times, talk about where we are now and what lies ahead.  So it was our time to host this august group and what a wonderful weekend it was, lots of laughter, some serious times, good food--our nights aren't quite so late as they once were!  (We had seen Ebb and Lois for a day in Sarasota--Ebb makes an annual trek to Florida for a week of baseball spring training while Lois enjoys the beach, so one day they came over to Sarasota and we had a delightful day visiting the Ringling Museum.)  The weather cooperated with us on Saturday, so we had a lovely outing to Gibbs Gardens in Ball Ground.  Mr. Gibbs is a well known master gardener and landscape guru who has designed many commercial sites in the Atlanta area.  As a way of sharing his love of flowers and plants, he has developed his family land into a stunningly beautiful gardens for tours, events, etc.  When we were there it was the tail end of the daffodil festival, and he was there in the visitor center, holding forth about the many different varieties, describing how the daffodil was his mother's favorite flower, and how this all started as his tribute to her.  Though lots of the daffodils were already gone, there were still many beautiful flowers and it was such a beautiful sunshine filled day, nice and crisp--had just a great time!  We even ran into some folks the others knew from Atlanta.  We got back to Cherry Log just in time to take them to the Pink Pig for supper--they loved it, and we were happy that Sam, the owner, was there so we could introduce them all to her.  She's our youngest son's age, and got the restaurant when her grandfather, Bud Holloway, died several years ago.  She's done a fabulous job of getting the place cleaned up and upgraded and we eat there quite often.  So we were happy to share our local treasure with Atlanta friends!

The following week we welcomed some new friends--Denny and Jane--to our home for an overnight visit.  We had met them in Bayfield, Wisconsin (Apostle Islands National Lakeshore on Lake Superior) on our trip last year.  We had just come back from a day of hiking and biking on Madeline Island, and as we rod our bikes up to the RV in the parking lot, we noticed another RV just like ours parked beside us.  As we were loading the bikes, Denny got out of his unit and we chatted a bit about our RVs, but then drove off our separate ways.  Later that evening, we were waiting on a table at a local restaurant, and in walked Denny and Jane.  So we ended up having dinner together and realized how much we had in common.  They are from southern California, a little north of LA, and were doing something of a similar trip to ours, celebrating Denny's recent retirement.  As we talked, we realized that we had each mapped out roughly similar itineraries for the balance of our trips, so we exchanged contact information, hoping we might cross paths again later in the summer or fall.  They told us they were planning to end up in Florida by November, then put their RV in storage and fly back to California for Thanksgiving and Christmas, and then fly back to their RV to continue their journey.  As it turned out, they ended up leaving their RV in storage in Orlando, and while we were in Sarasota we drove over there one day to take it out for a spin, just to check on all the systems for them and make sure it was in good shape.  We were happy to do that for them, and it gave them real peace of mind to know all was okay with their RV.  We had invited them to stop by to see us in Cherry Log on their way home, and the timing worked out well for all of us.  They flew back to Orlando just as we were leaving Sarasota, and they had some folks to visit along the way, but got to Cherry Log the week after our Atlanta friends left.  So we had a great visit with them while they were here, and once again, as we got to know each other better, we found many more common interests.  They were planning to take roughly the same southern route back home that we had travelled last year, so we gave them some of the names of RV campgrounds we had liked and some tips on places to see.  As it turned out, since they left, they've written that they've followed our blog from last year to help them decide where to stop along the way, so that's been fun.

The weekend after that our new friends from Mass., Linda and Gary, who we got to know so well at the RV park in Sarasota, were on their way back north and camped for several days at Stone Mountain.  Trisha drove down there and spent the day taking Linda into Atlanta to visit the Botanical Gardens.  She took Linda to see First Presbyterian, where Trisha had been the minister in charge of Pastoral Care for 14 years, so she could see the beautiful stained glass windows, and they had a delightful day.  They had been so nice to us when we first got to Sun N Fun in Sarasota, introducing us to lots of new folks, showing us all around the park, as they've been spending the winters down there for 7 years.  They were the ones who hosted the big party I described in the post on Sarasota.  So that was fun for them to get together, and Trisha got to meet their new dog, who they adopted in Sarasota right after we had left.  Trisha had been able to give Linda a lead on the shelter where they found Chino--our friend Barby had a friend who worked at the shelter, so Trisha passed the info along to Linda and they were able to find just the right dog!

Later in April, Trisha and two of the Beach Girls group drove to Buford, SC to surprise another of their group for her birthday.  They had a great time and were able to completely surprise Diana, who had no idea they were coming.  Barby had flown up from Sarasota to be part of the surprise, and they all had a great time!


Here I am with Jon, Ebb, Lois and Joyce at Gibbs Gardens 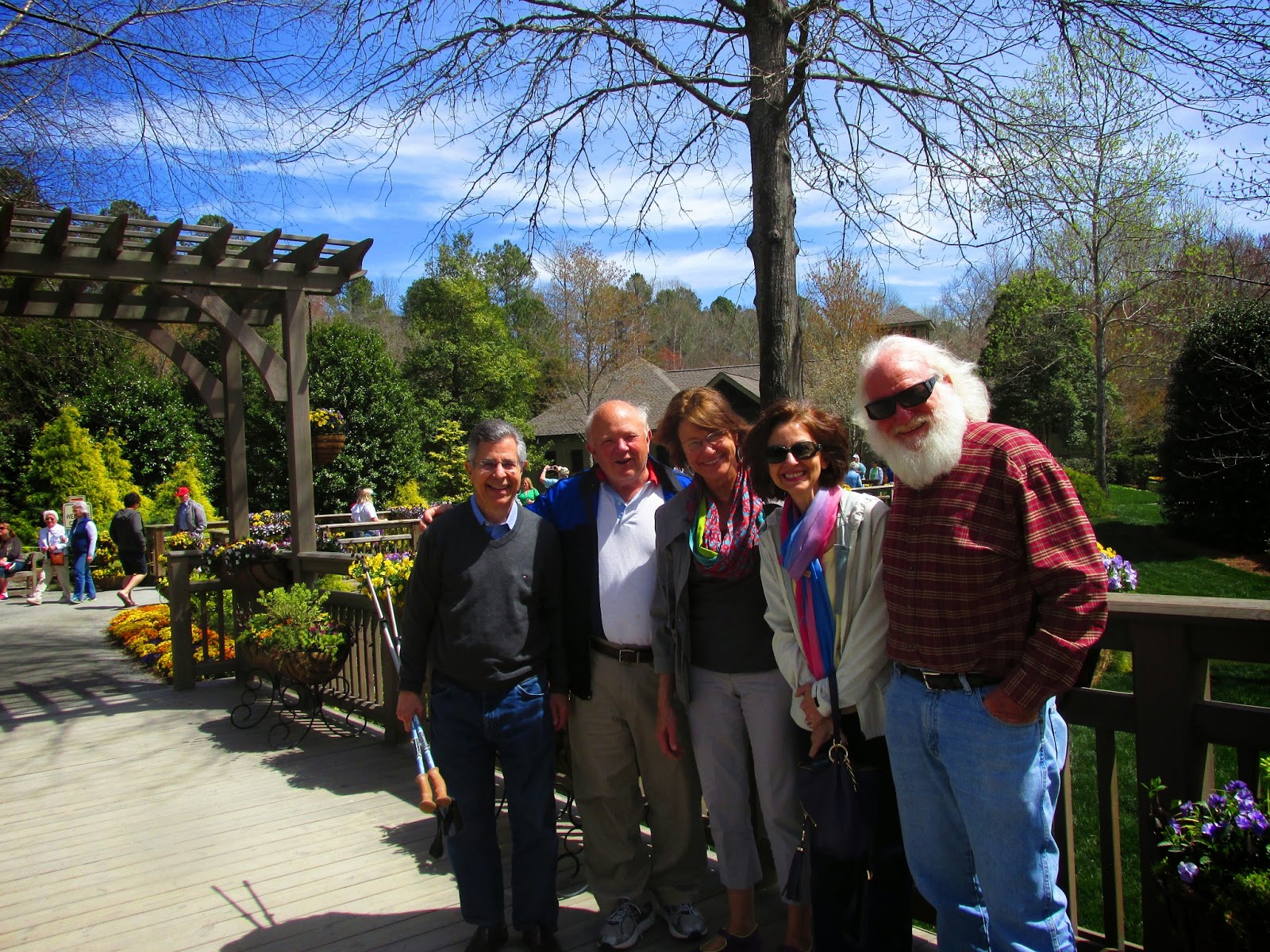 Some of the lovely daffodils, as we rode the tram through the gardens 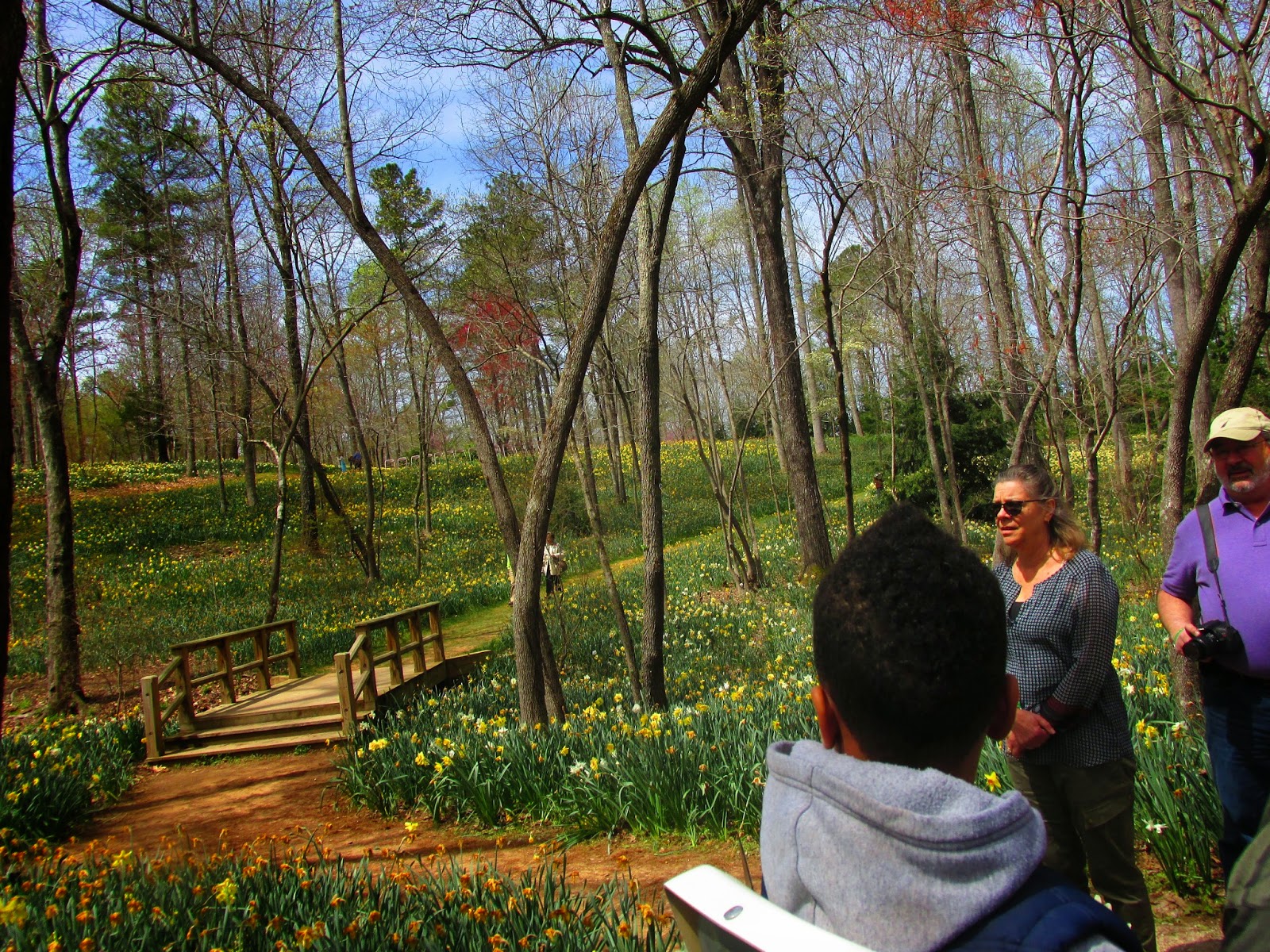 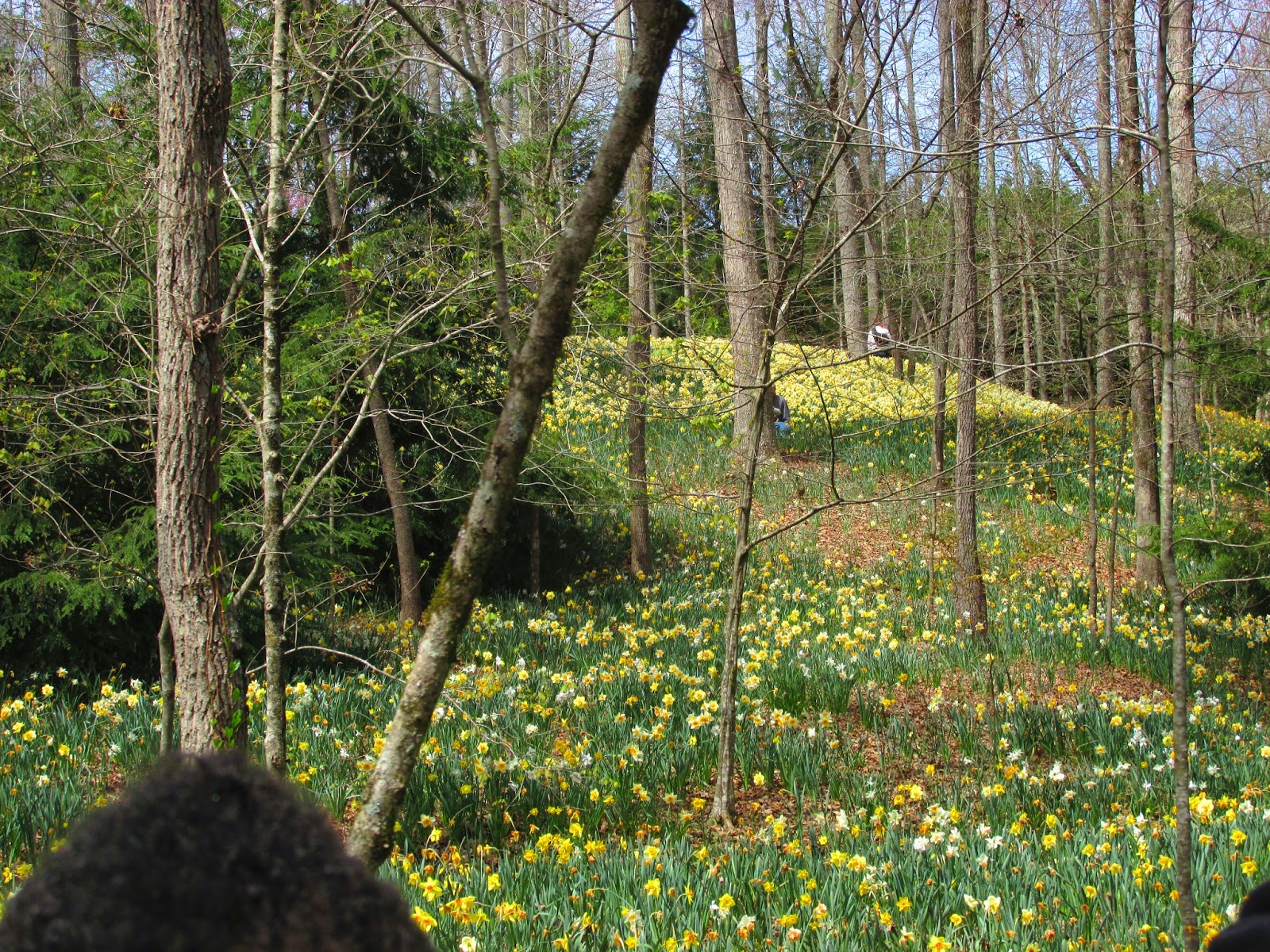 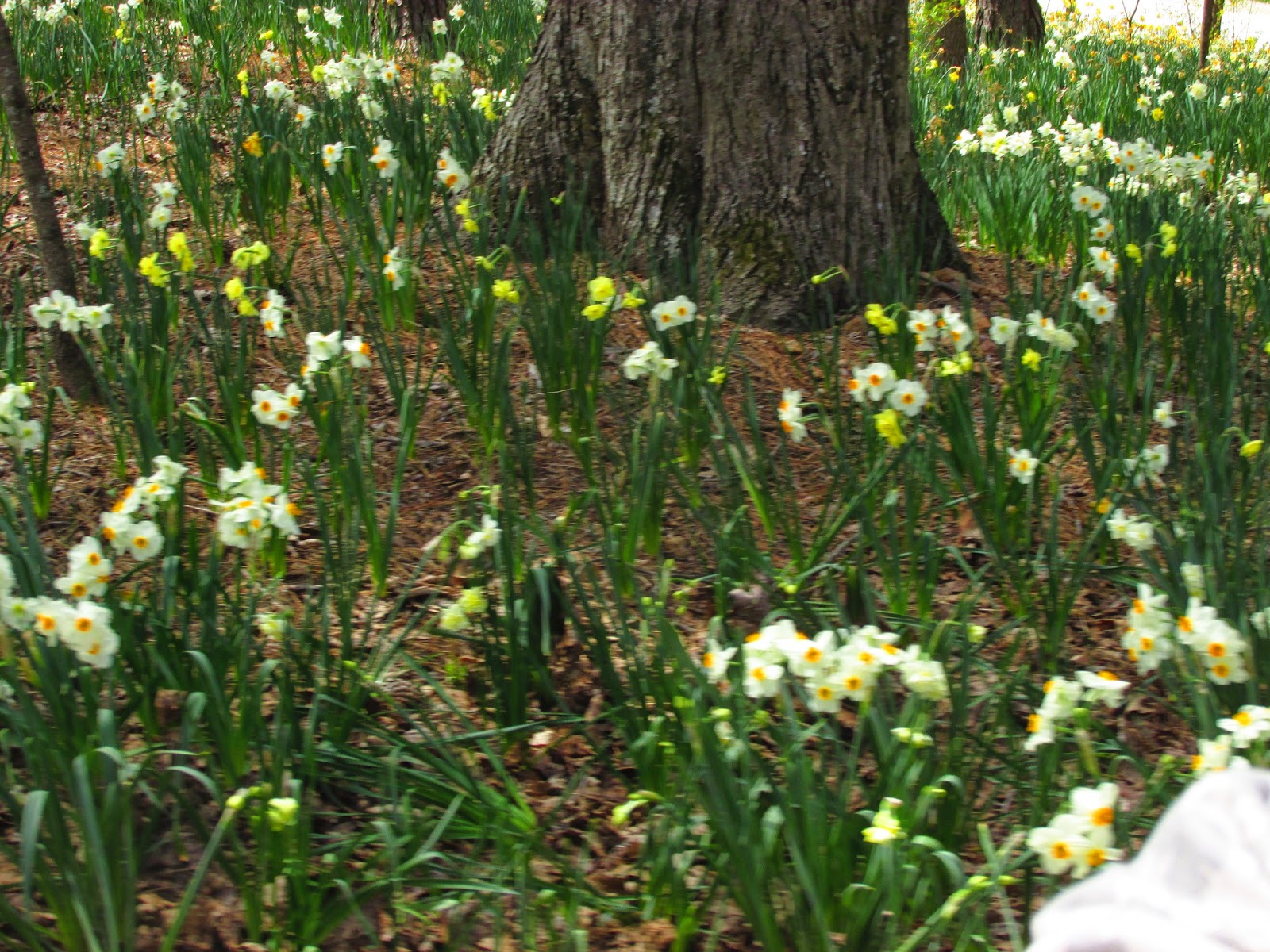 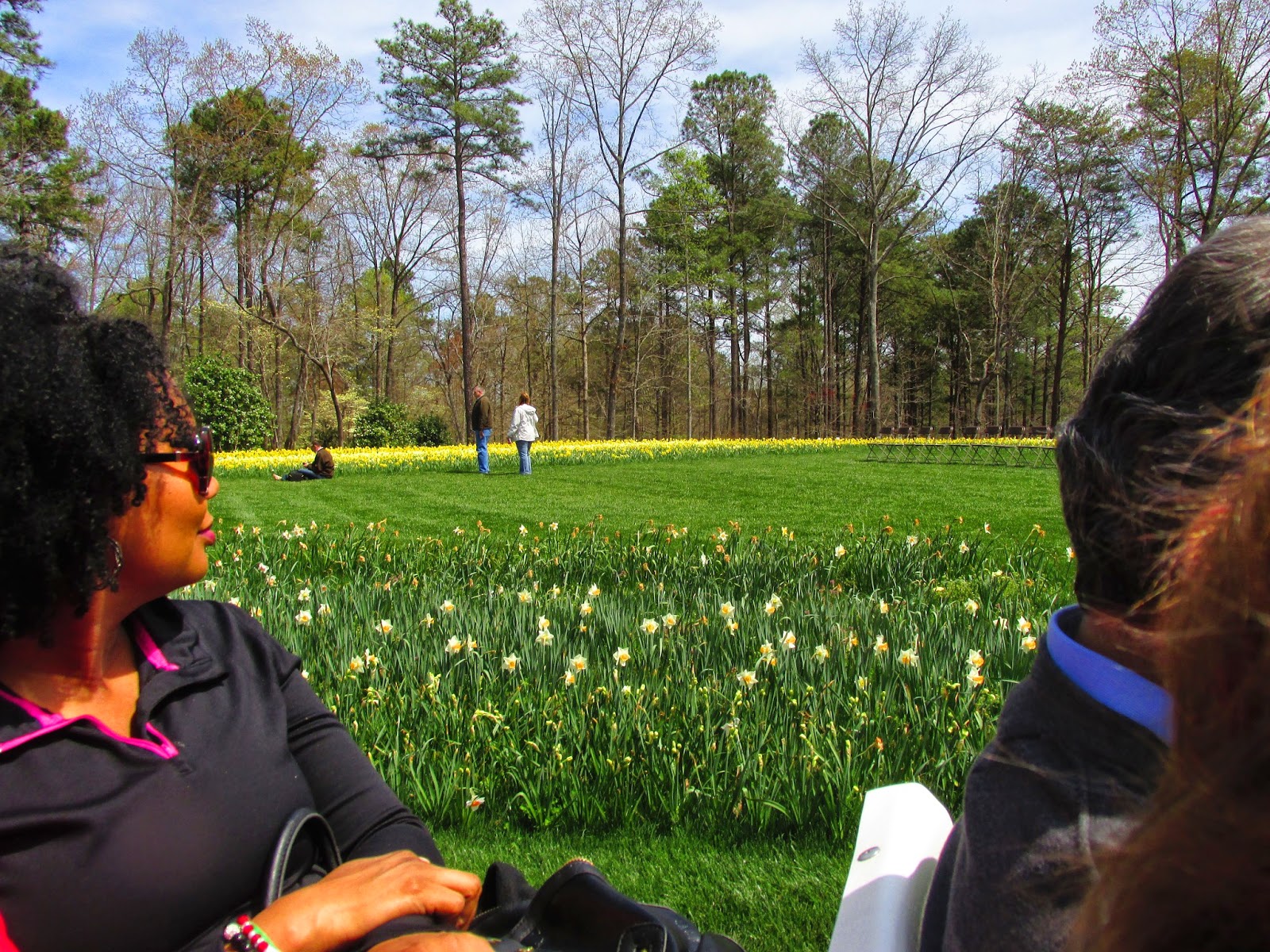 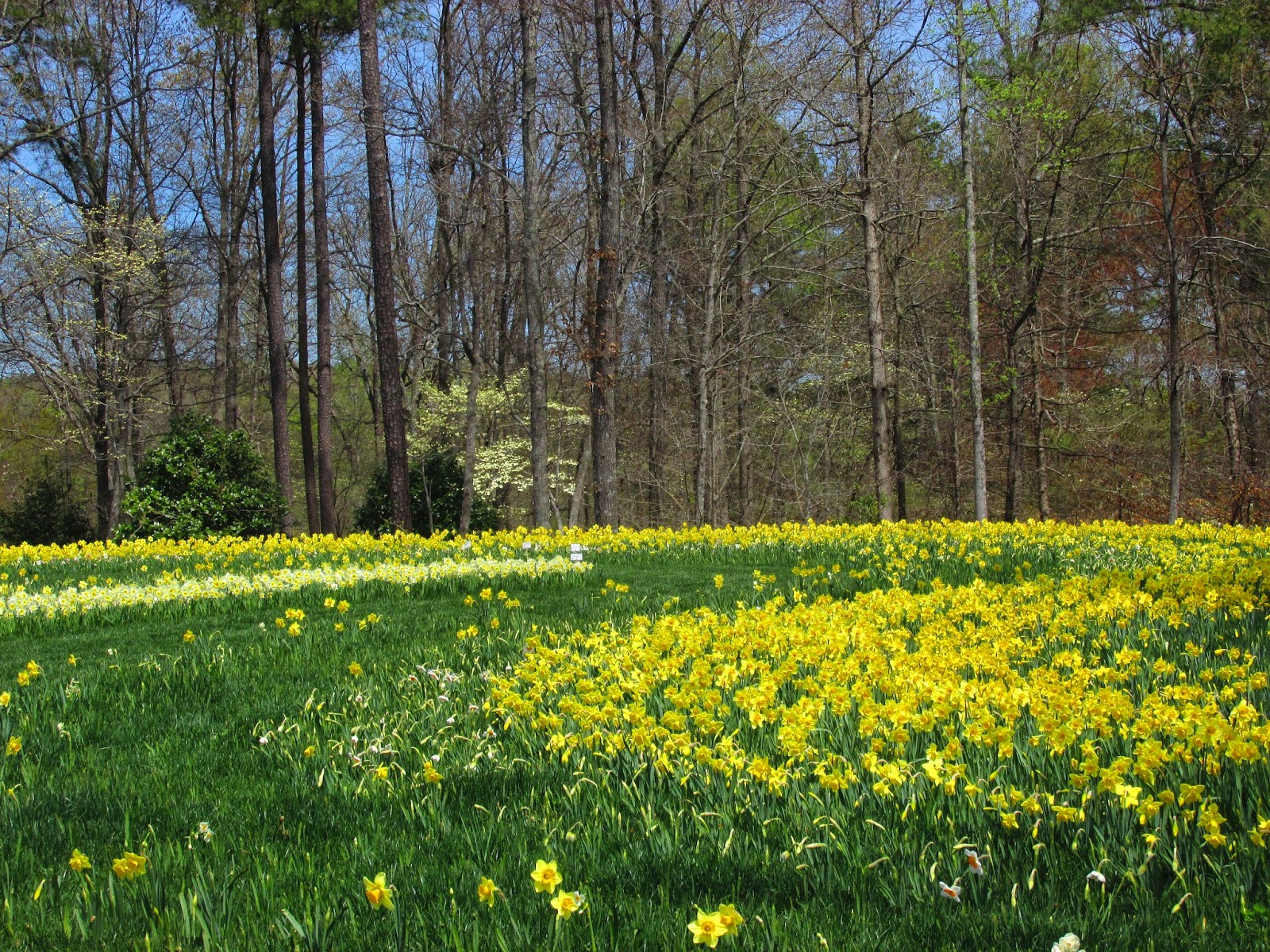 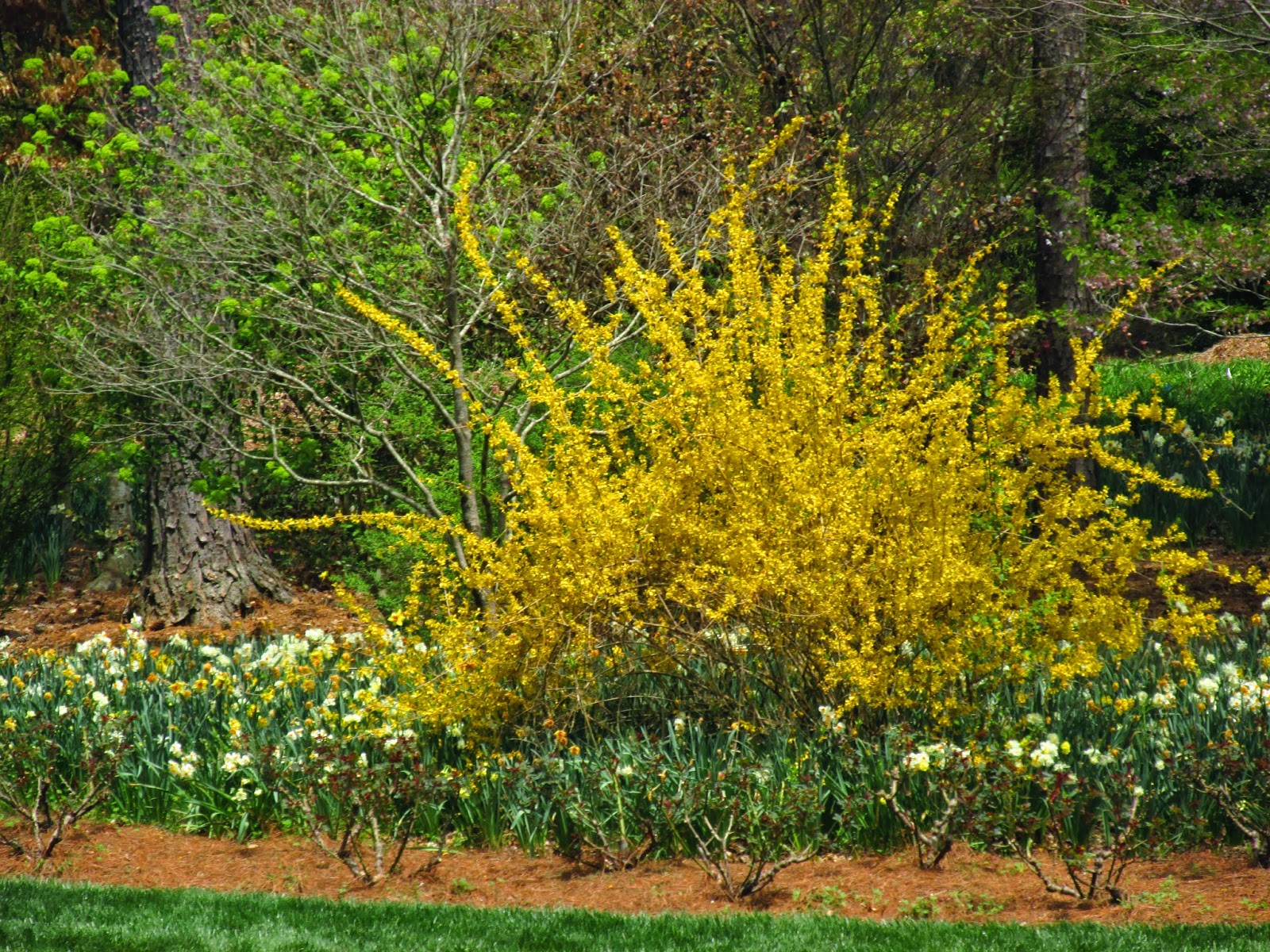 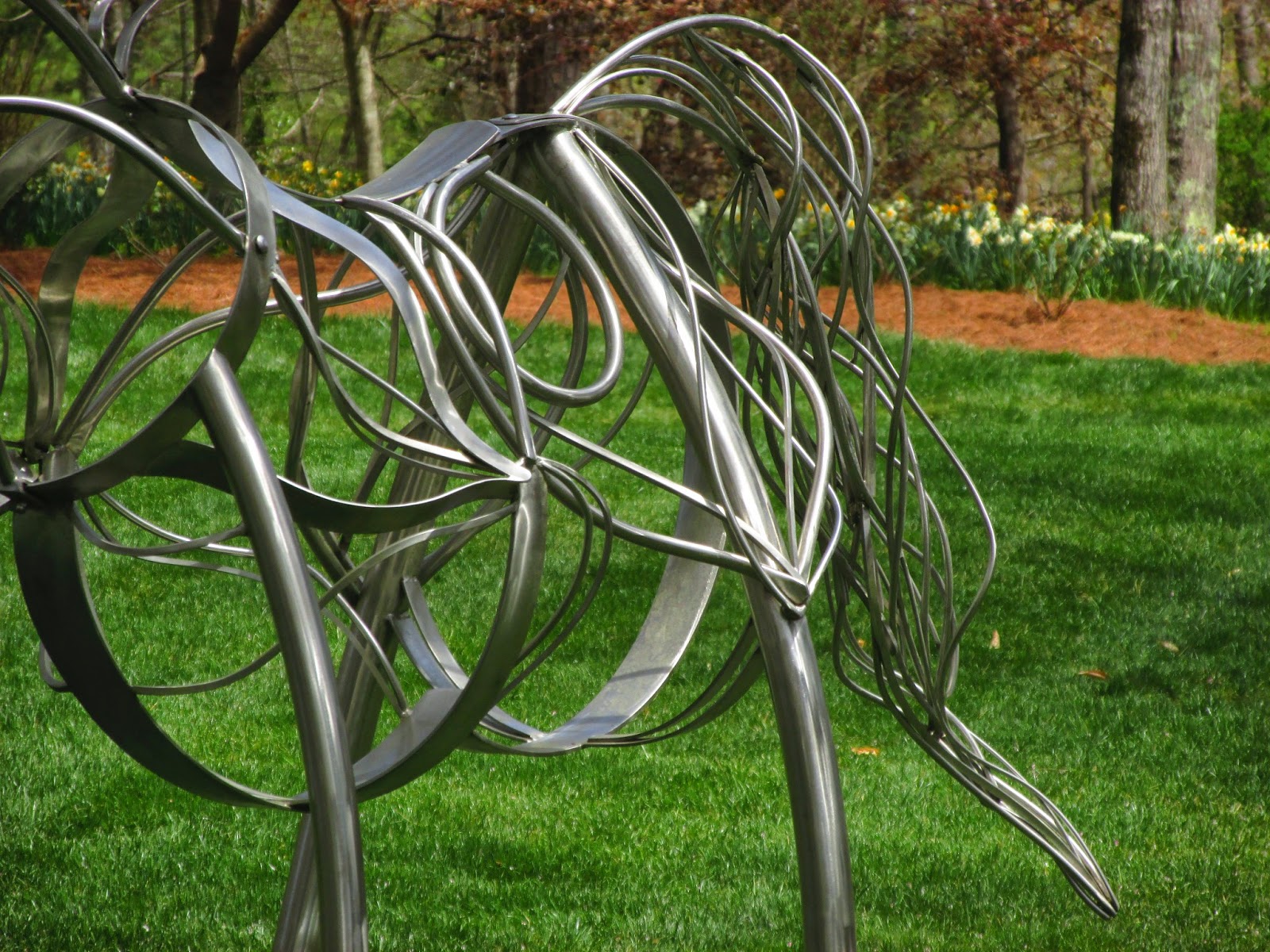 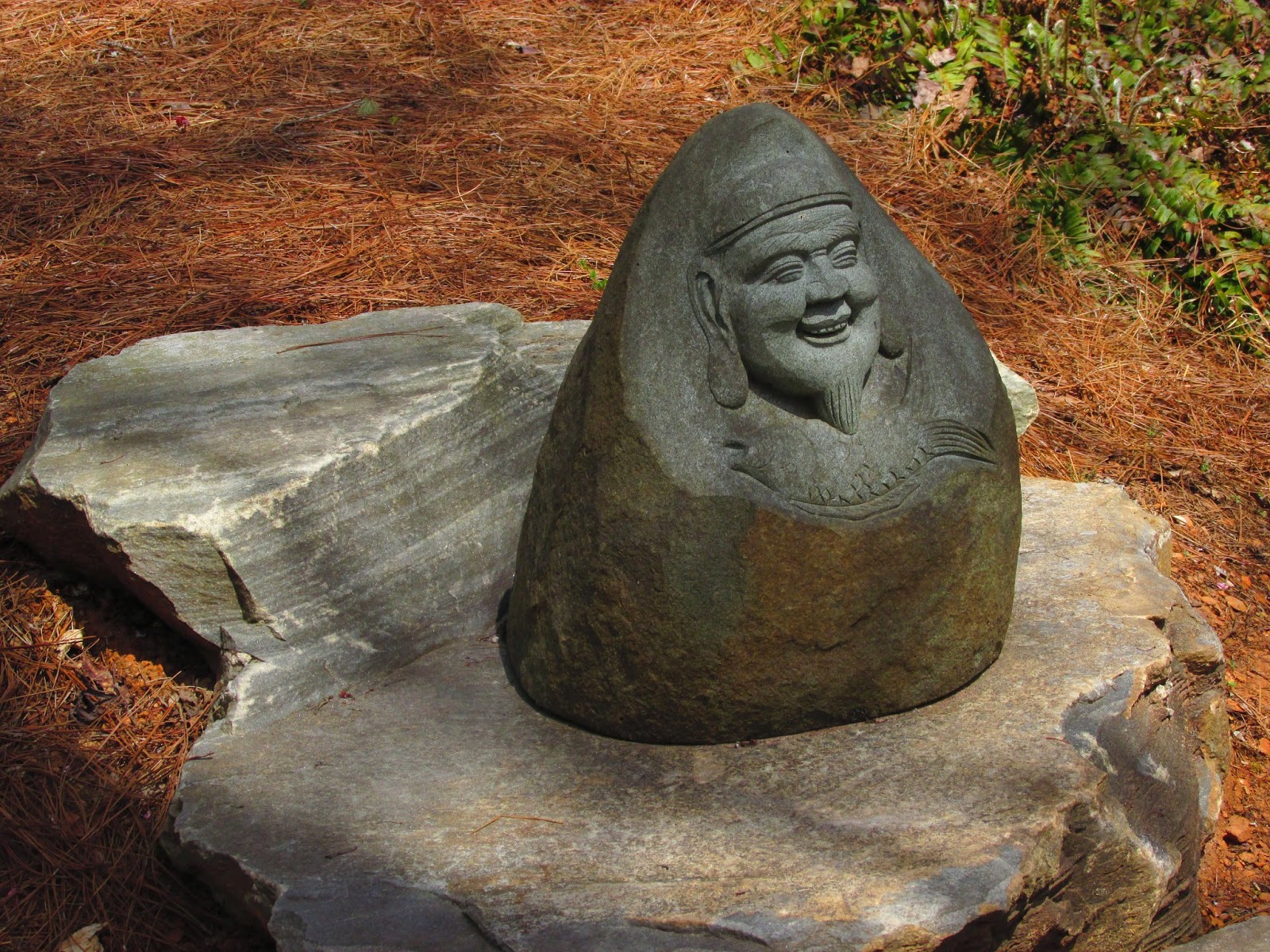 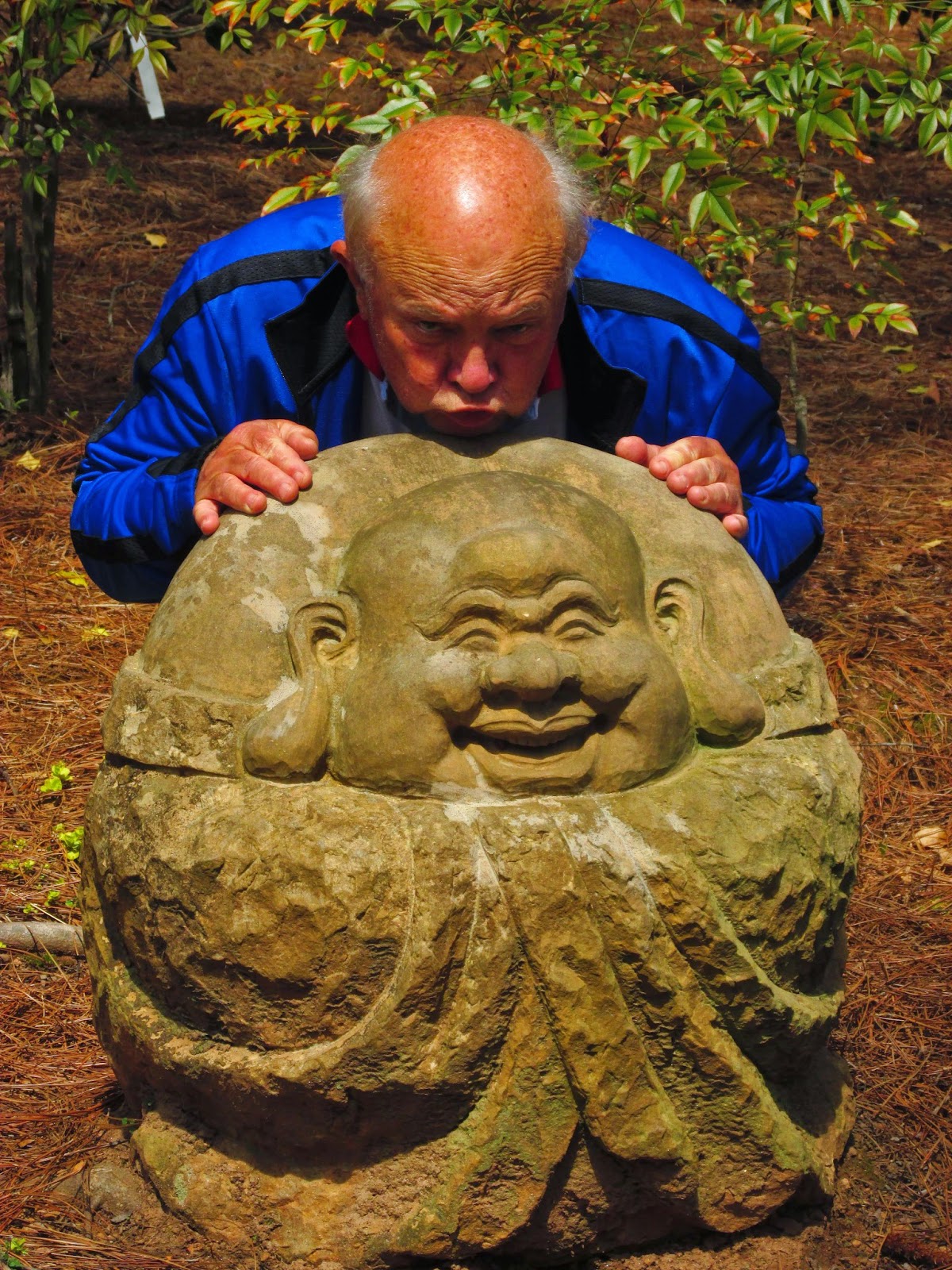 Longtime readers will remember how much Trisha loves owls, so we had to get a pic of her by this one! 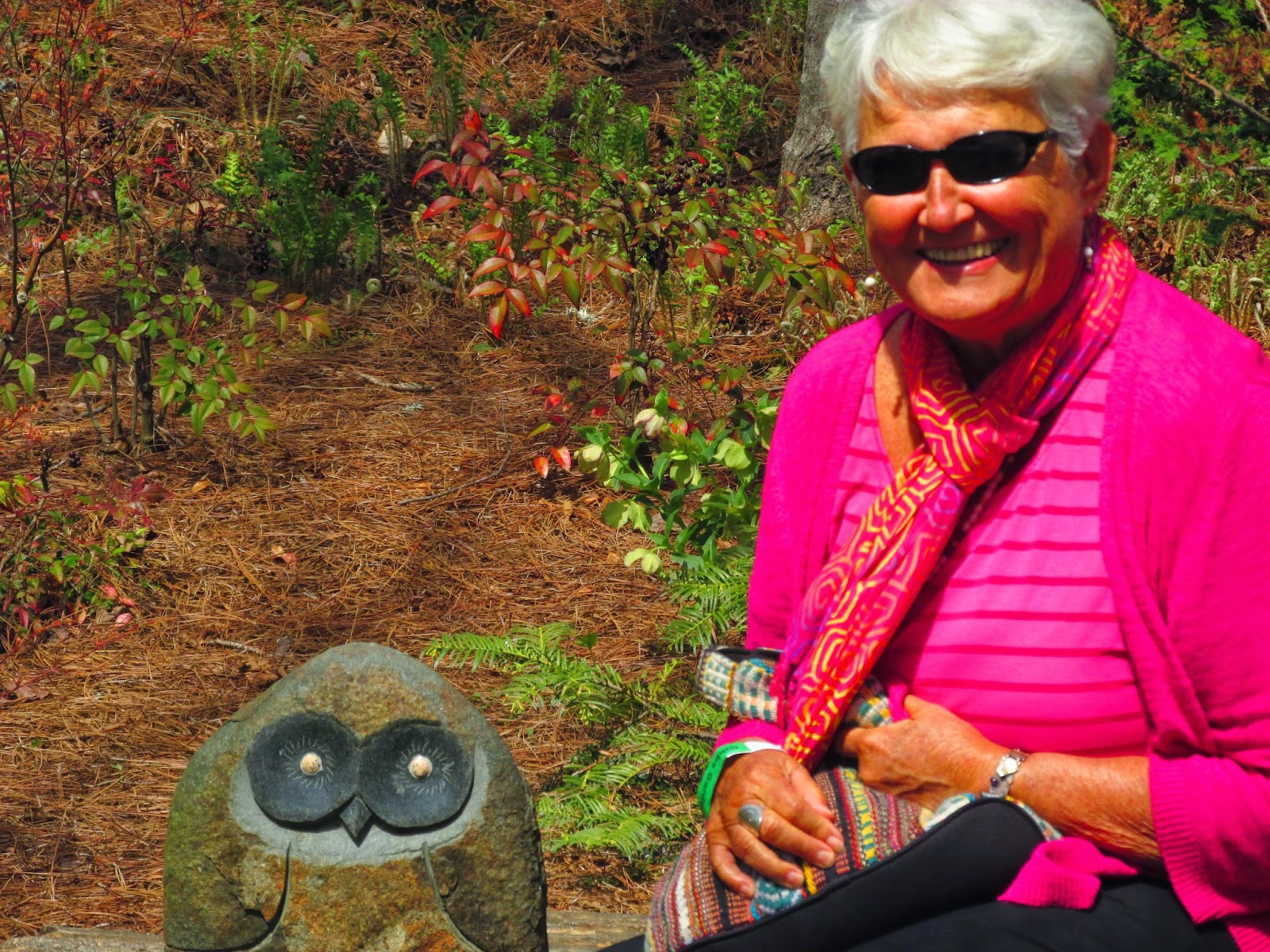 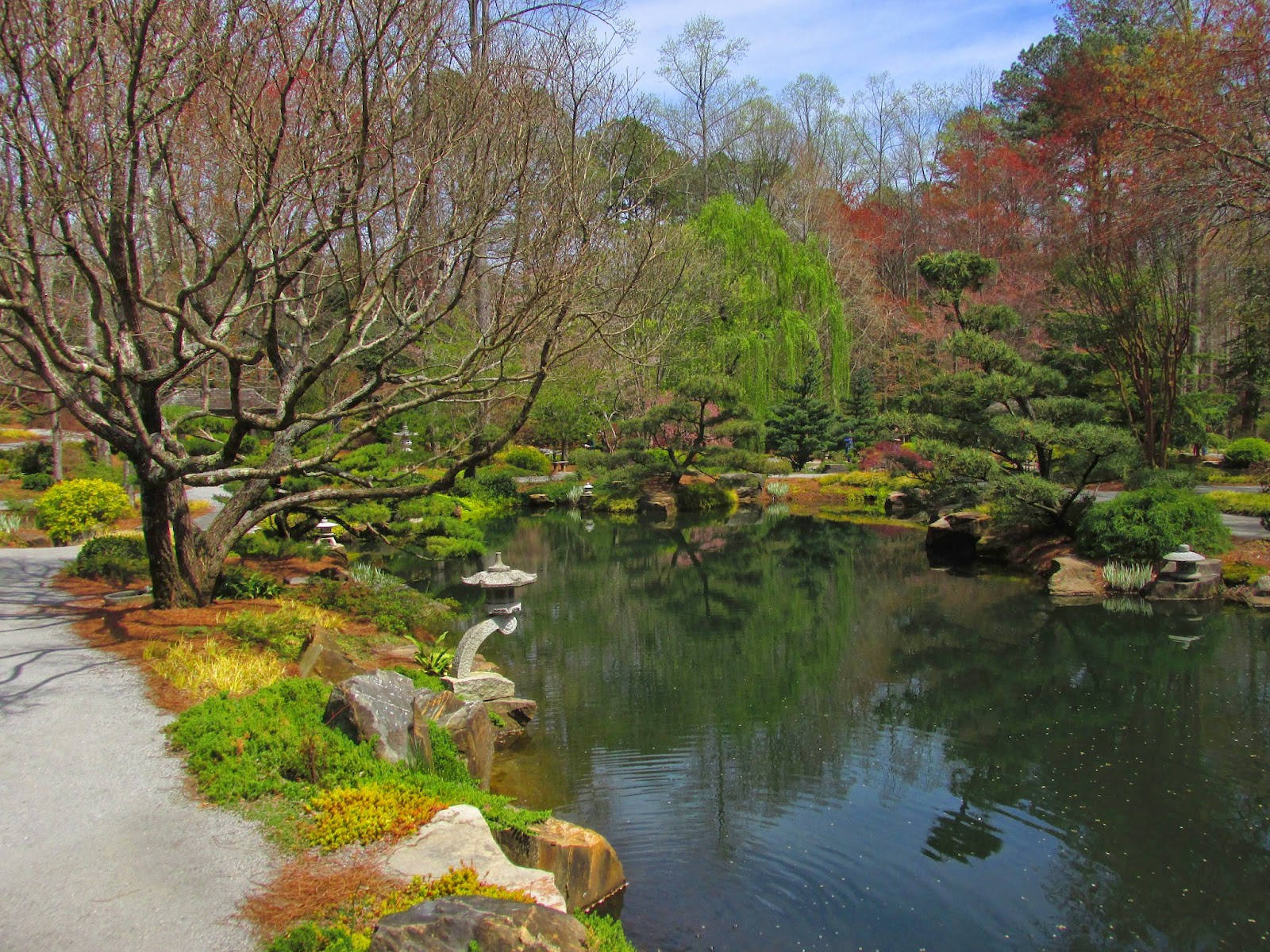 Above, lovely little waterway through some nice colors--this place would be gorgeous in the fall, too!
Below, a beautiful tree lined walkway--they use this area for weddings, with the wedding party processing down between these two rows of trees--can only imagine how beautiful that must be! 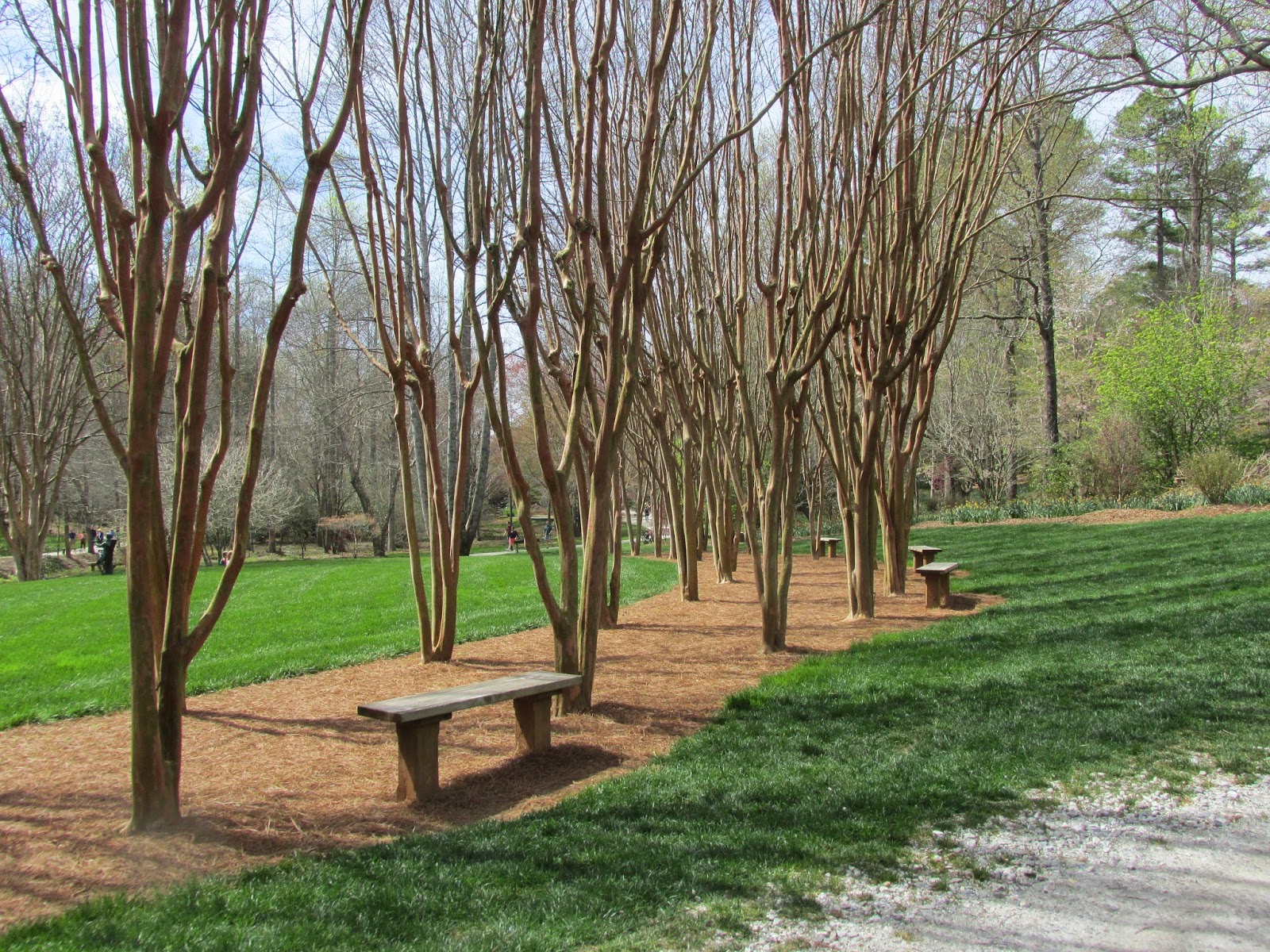 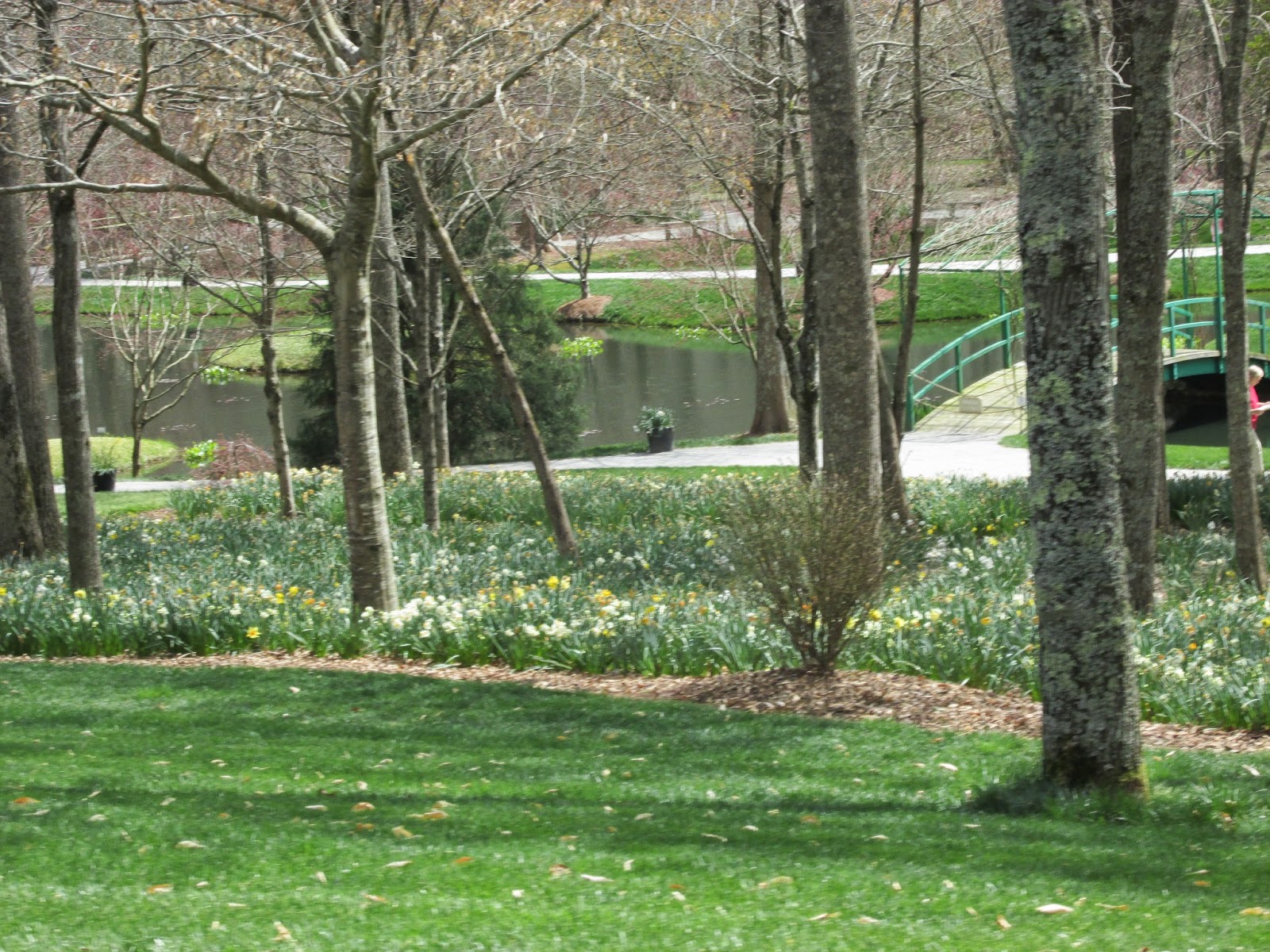 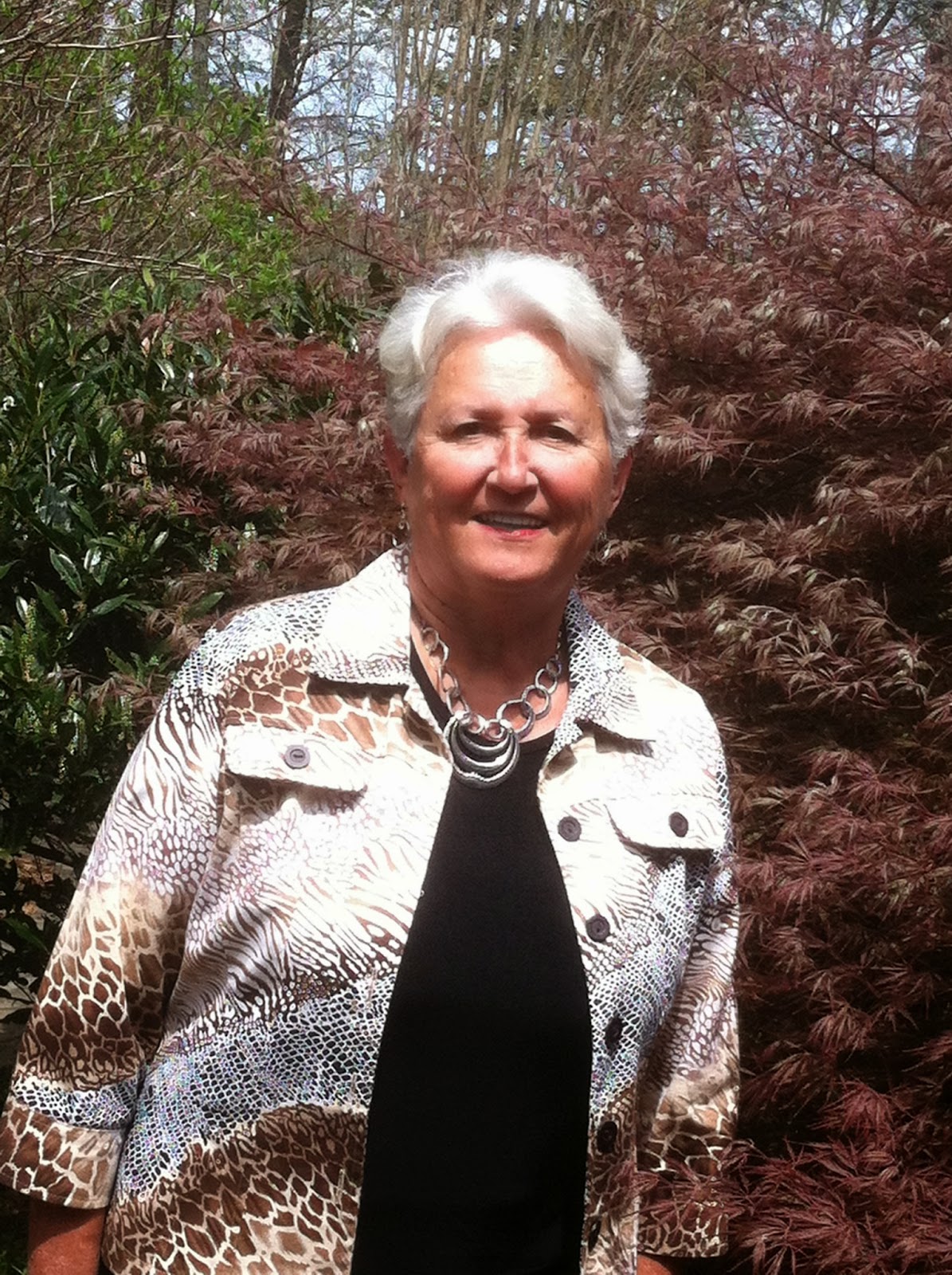 Denny and Jane, with their RV beside our house, as they were taking off the morning after their visit. 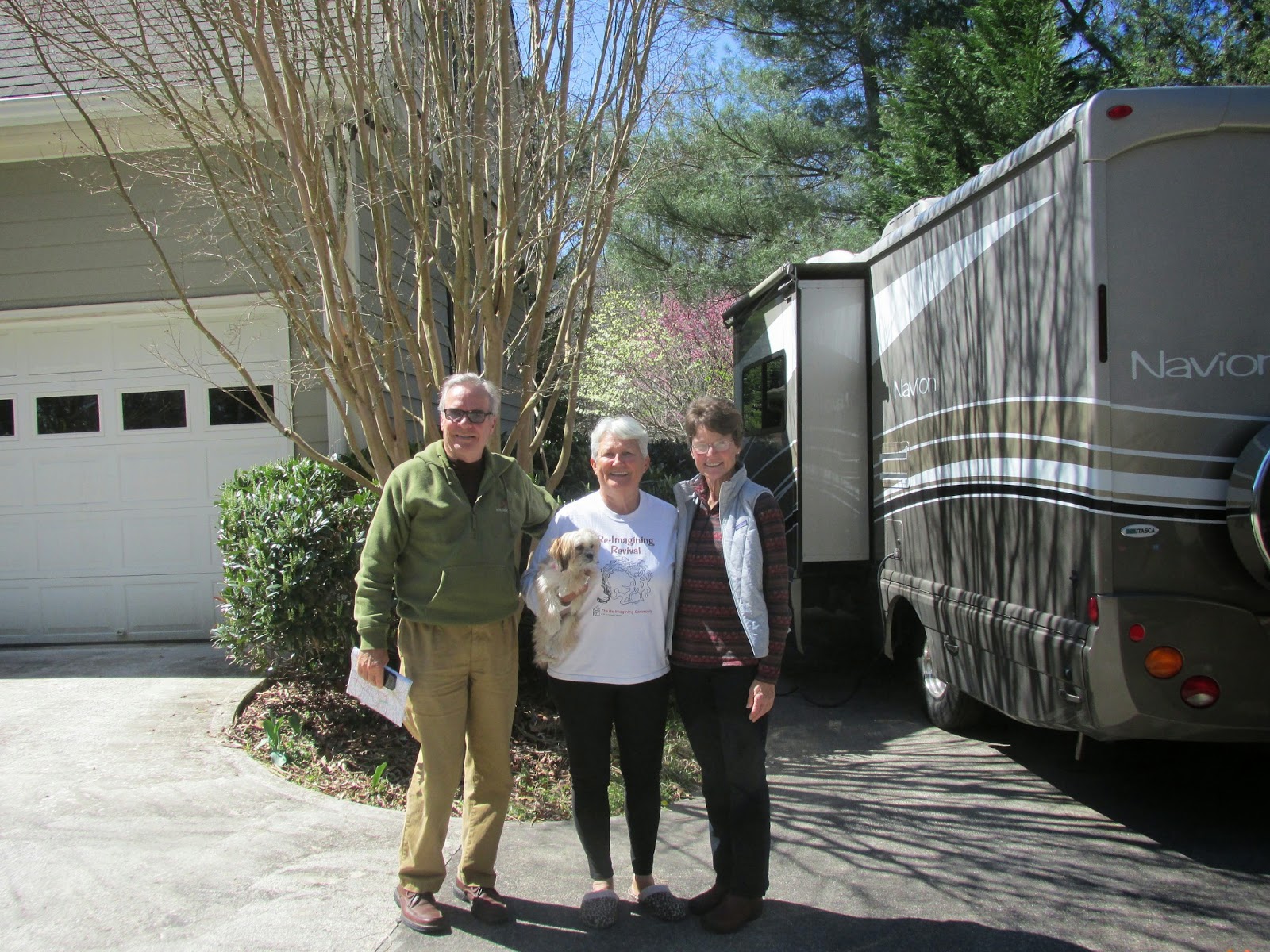 Linda, among the statuary at the Botanical Gardens 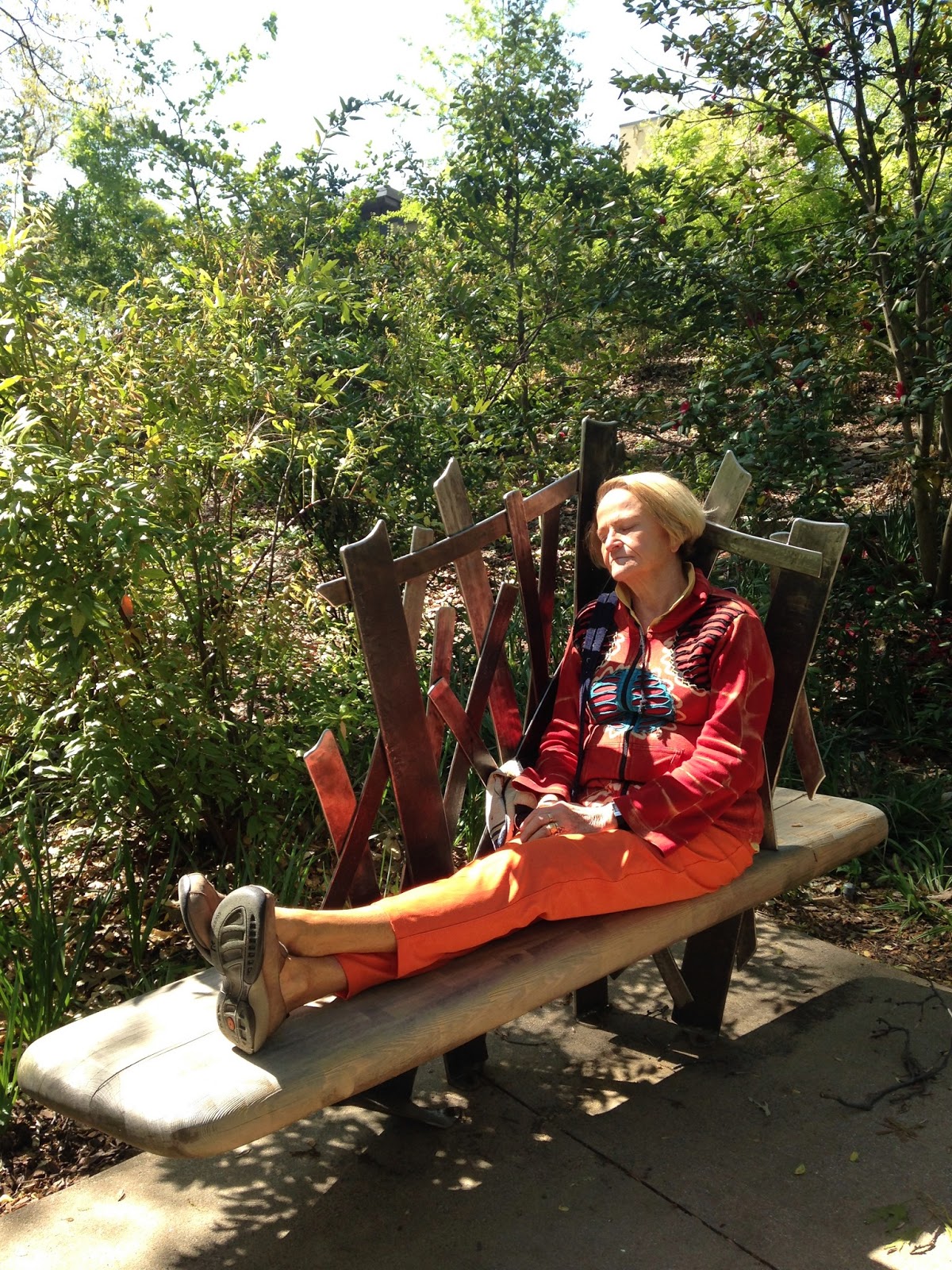 Linda telling a frog to cheer up!! 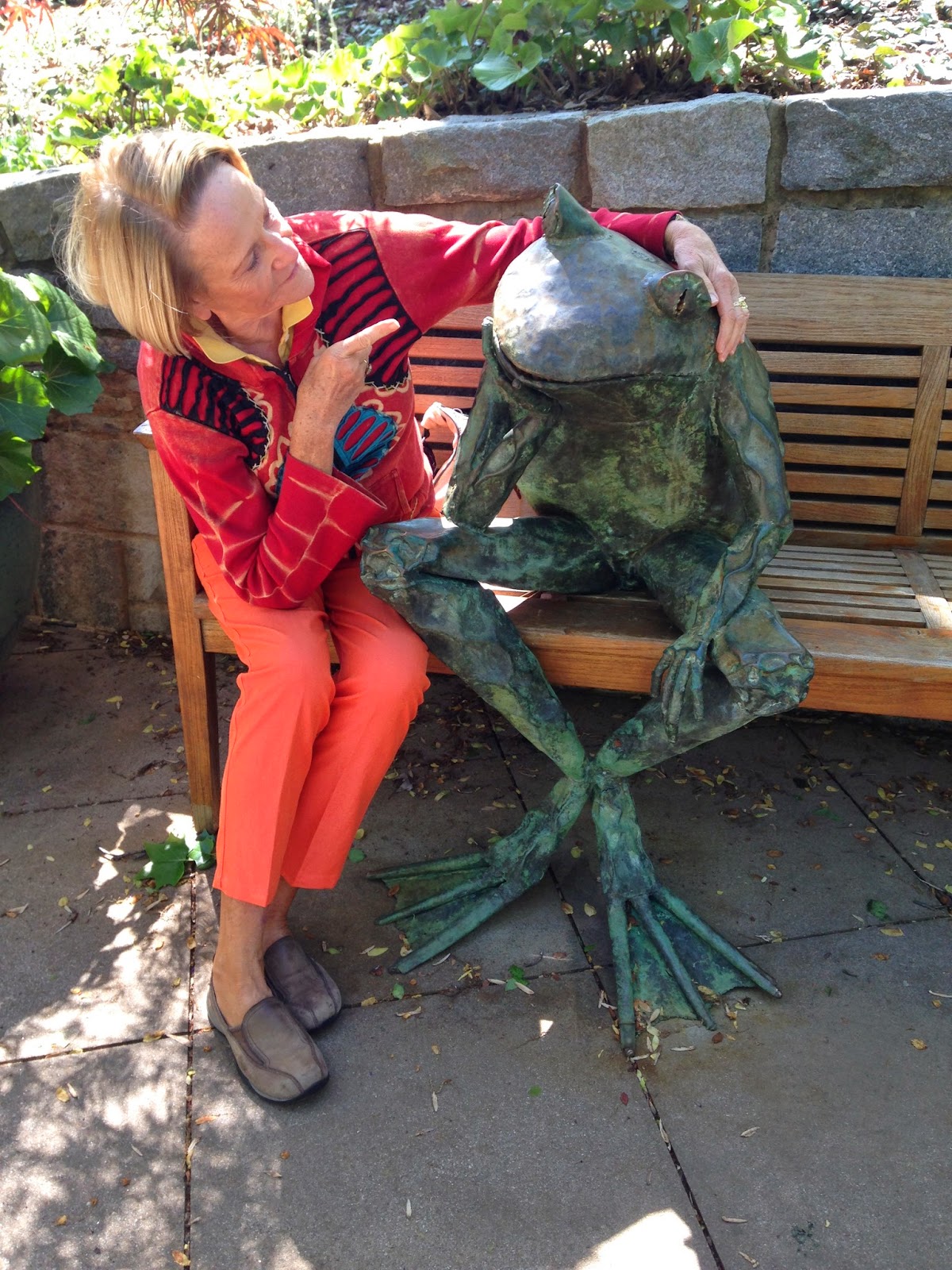 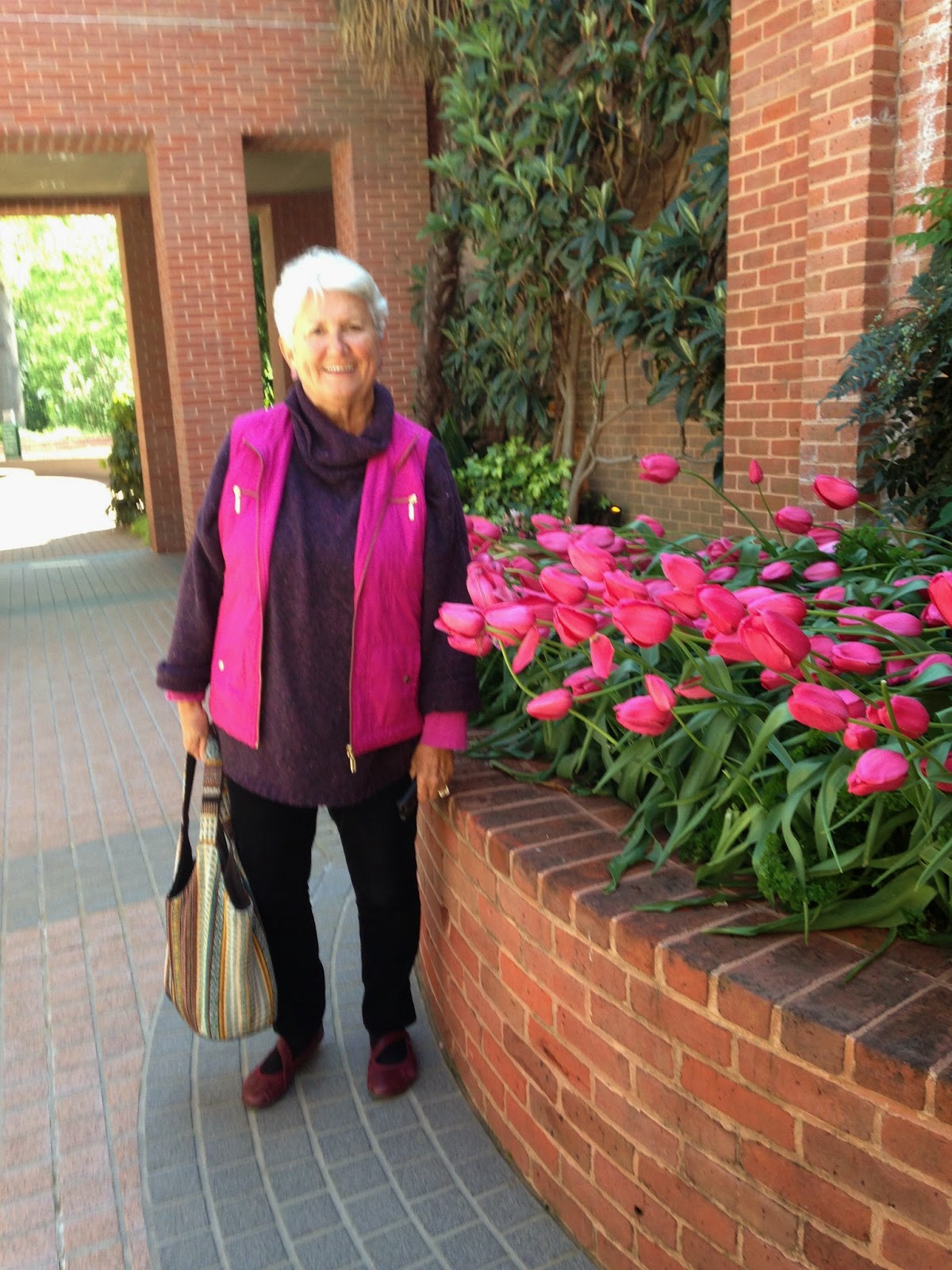 Trisha, chillin' with Sophie on our front steps! 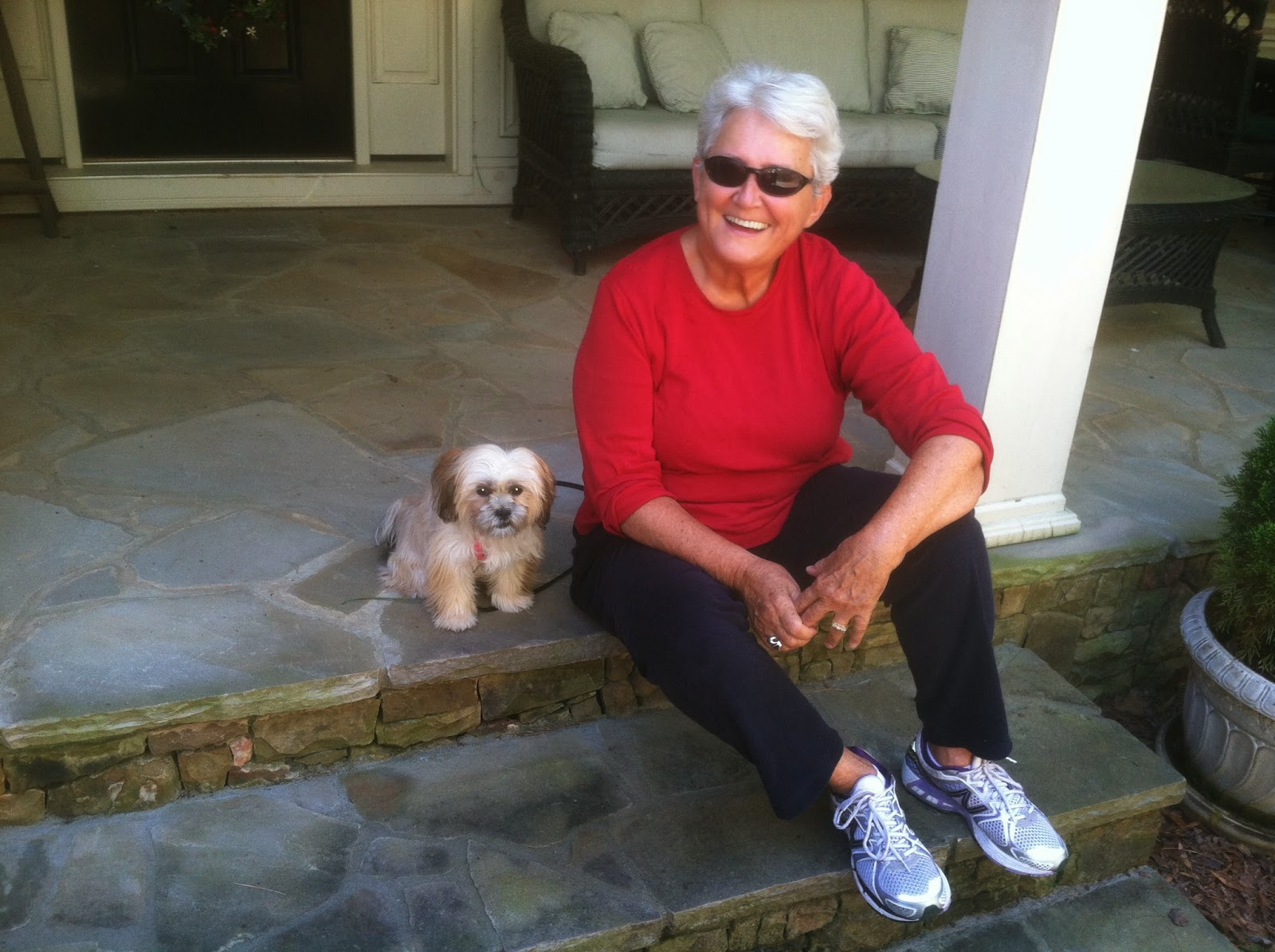