The first weekend in May we headed down to Ocala, Florida where I grew up, for my 50th High School Reunion of the Class of 1964.  It was indeed a wonderful trip down memory lane, and a time of significant reflection.  We really enjoyed seeing so many folks from my class, a number of whom Trisha has had occasion to meet over the years.  Several of my high school classmates went to Florida Presbyterian College--now Eckerd College--along with me; Trisha and I met there, so she knew all of these folks.  We also attended the 10th and 20th reunions and during our time in Atlanta and Washington, DC we crossed paths with several of my high school classmates so, fortunately for her, it was not like she didn't know anybody when we got there.  And, of course since she is such an extrovert and not shy at all, she met lots of folks for the first time during the course of the reunion and  had made lots of new friends by the time we left.  It was particularly good to be here for this significant milestone, since we had not been to a reunion since the 20th, so it was 30 years since we'd seen a lot of these folks.  One thing that was interesting to me was how easy it was to visit with folks who were not necessarily the ones you hung out with a lot in high school, and to learn of things you have in common.  And, just having the chance to reflect on what these people meant to me growing up, how important we all were to each other as we learned how to relate to people, learned how to grow up--with lots of trial and error, of course!--just a lot of warm and fuzzes!  It was also nice to learn about what folks have done over the last half century.  It was also quite sobering as the emcee for the Saturday evening dinner read the names of the 49 classmates who have died--we had a little more than 300 in our class, so that's a pretty significant number.  Just gave me chills to hear the names read and look at their yearbook pictures--some died many years ago at very young ages, and others only recently.  A very sobering reminder of the fragility of life and the importance of making the absolute most of each and every relationship you have.  If you ever feel the impulse to tell someone you love them, or just that you're glad they are or were at some time important in your life--don't stifle that thought--act on it, 'cause you just never know.
Since the reunion, another classmate called me after reading the little blurb I had written for the "Memory Book" that the hardworking reunion committee had put together.  He had noticed my comments about traveling the country in our RV and he also has spent a lot of time RVing.  We had a wonderful conversation and learned that we had lots more in common, interests that neither of us knew we had or had not even developed yet.  Just a delightful time sharing what each of us has done over the last half century.  We're going to try to see several classmates as we travel the country.  Nothing more important than personal relationships, folks.  Cherish each and every one you have and never take any of them for granted. 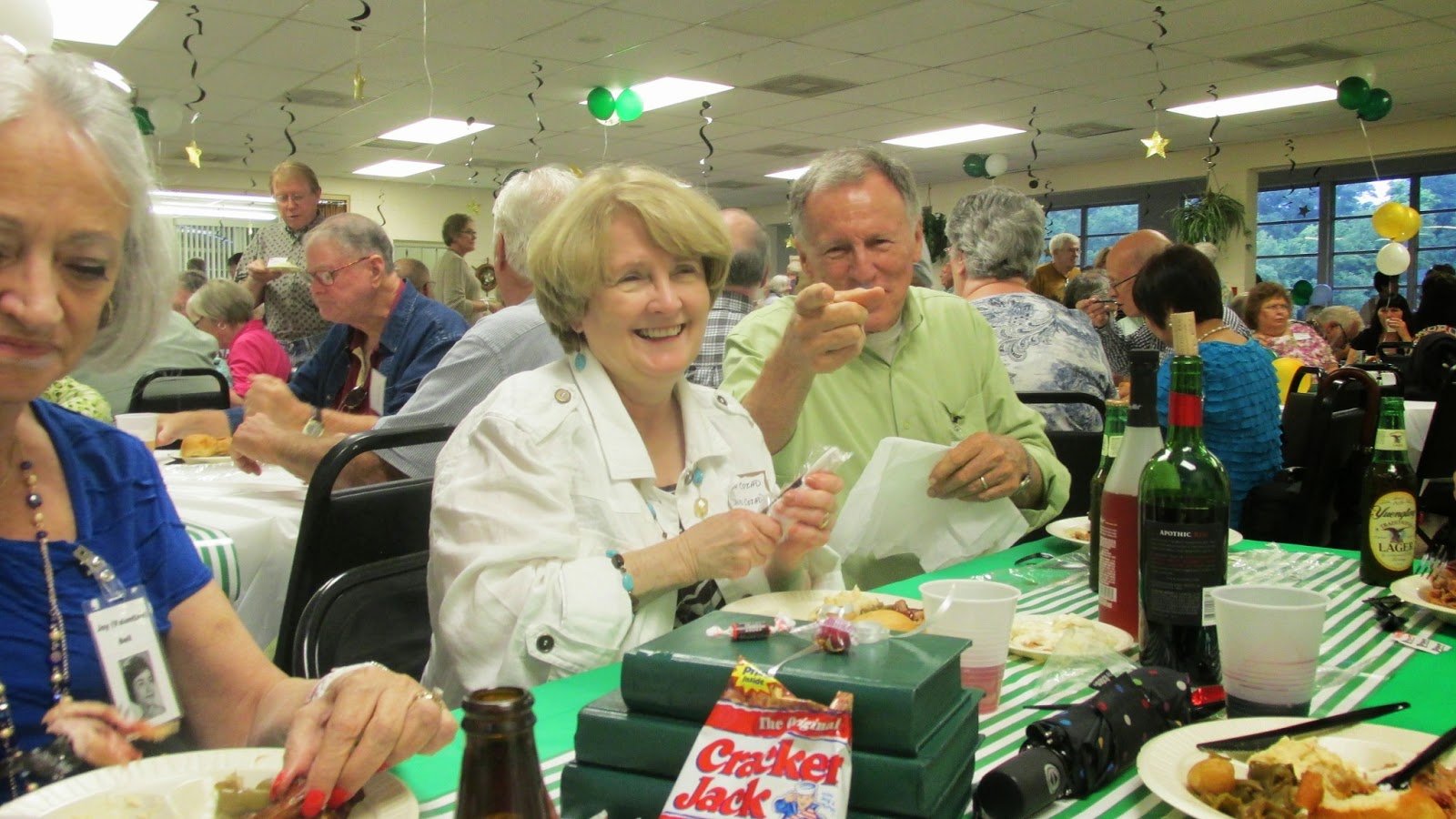 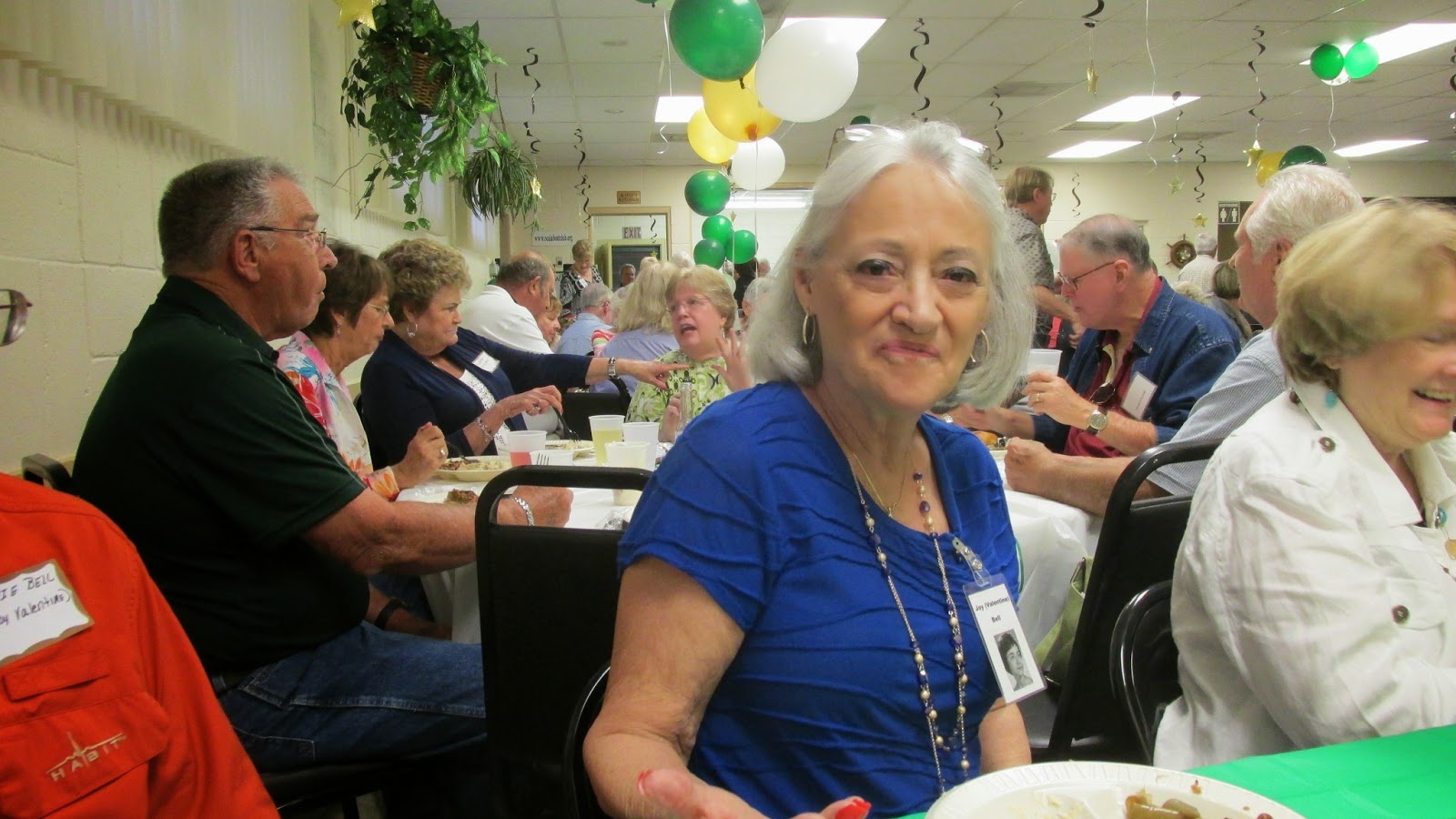 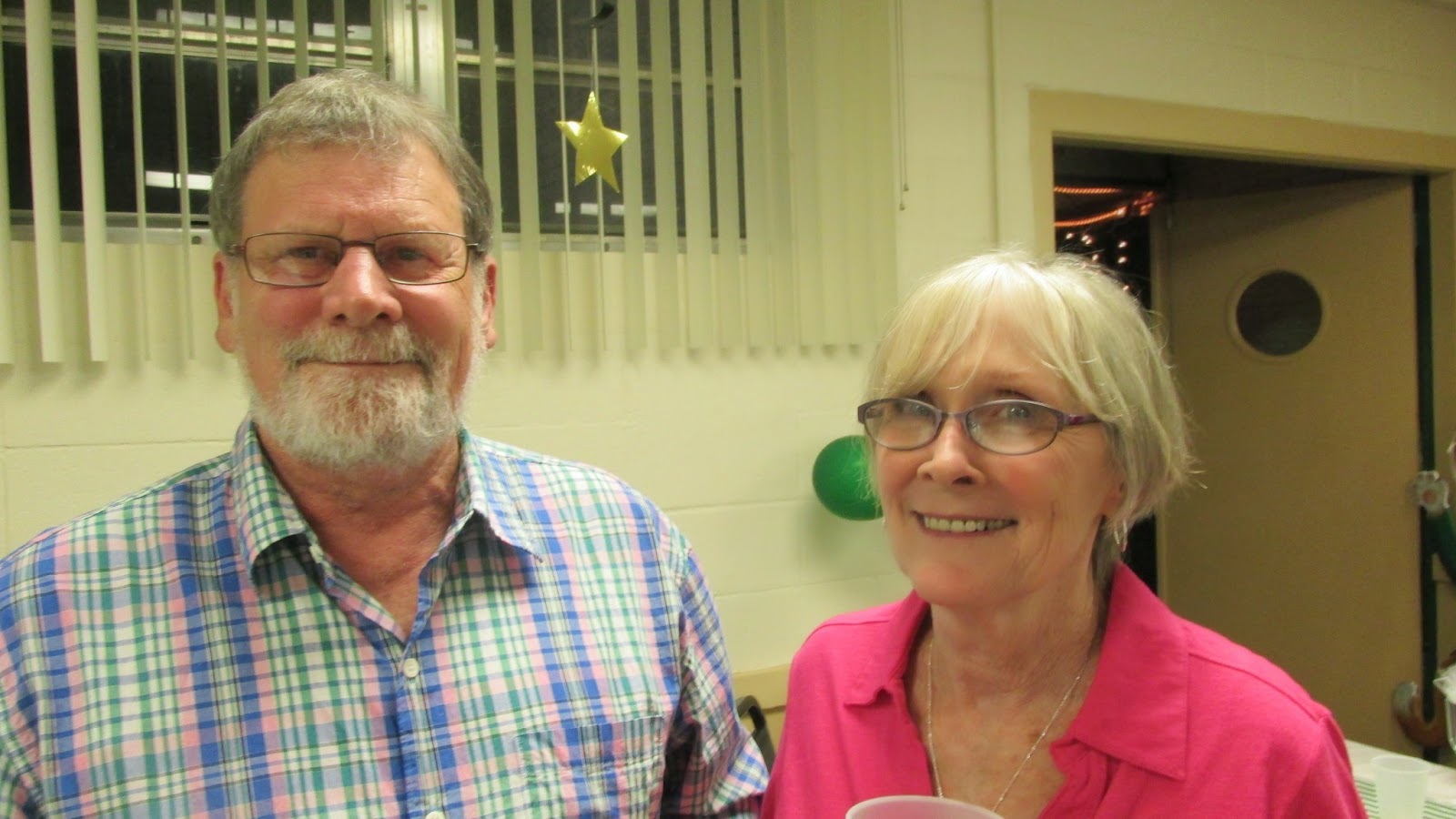 Wayne McCall and his wife 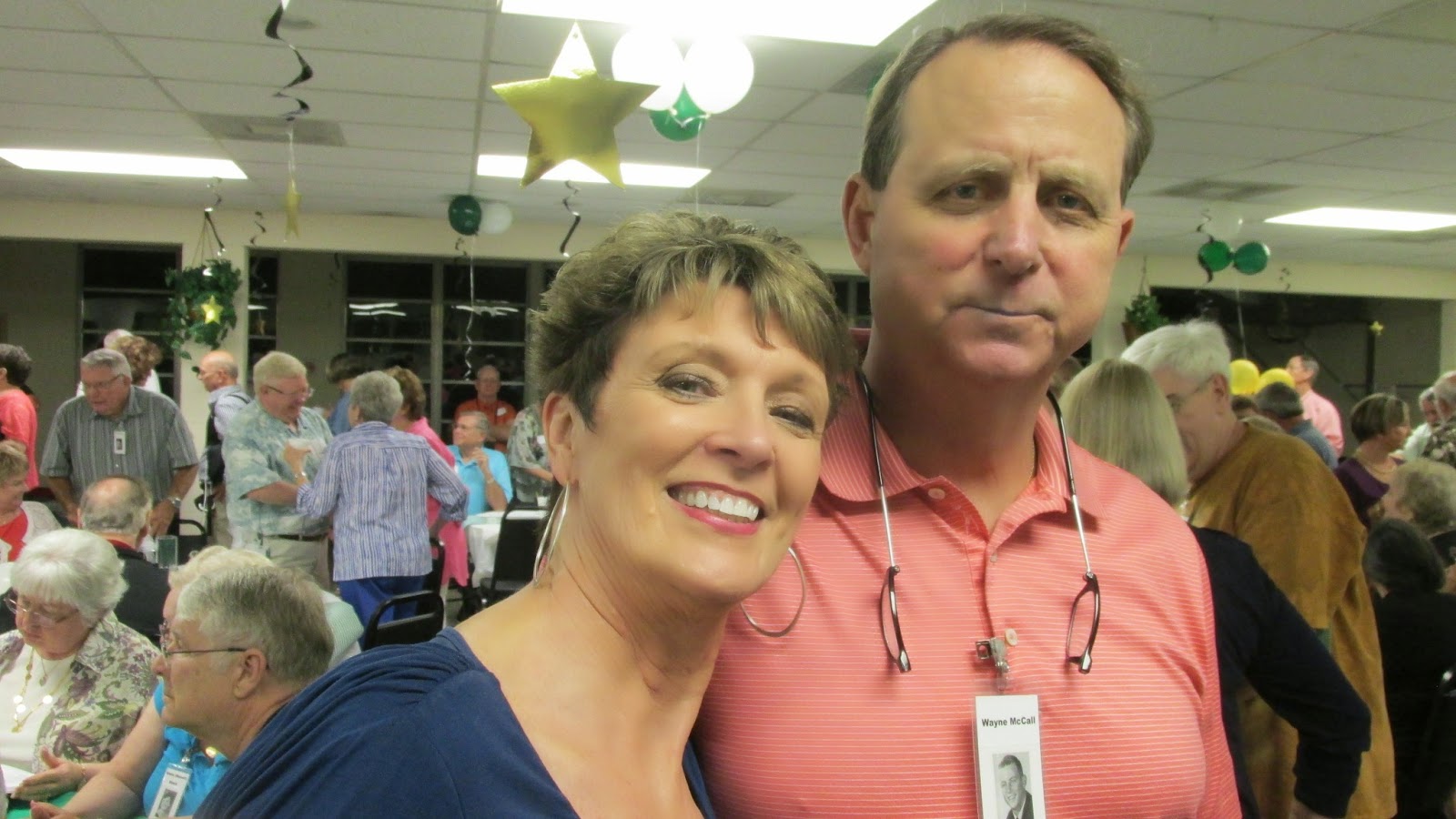 Harvey Johnson and Gene Peek--Gene and Wayne played football for Florida after starring on our high school team. 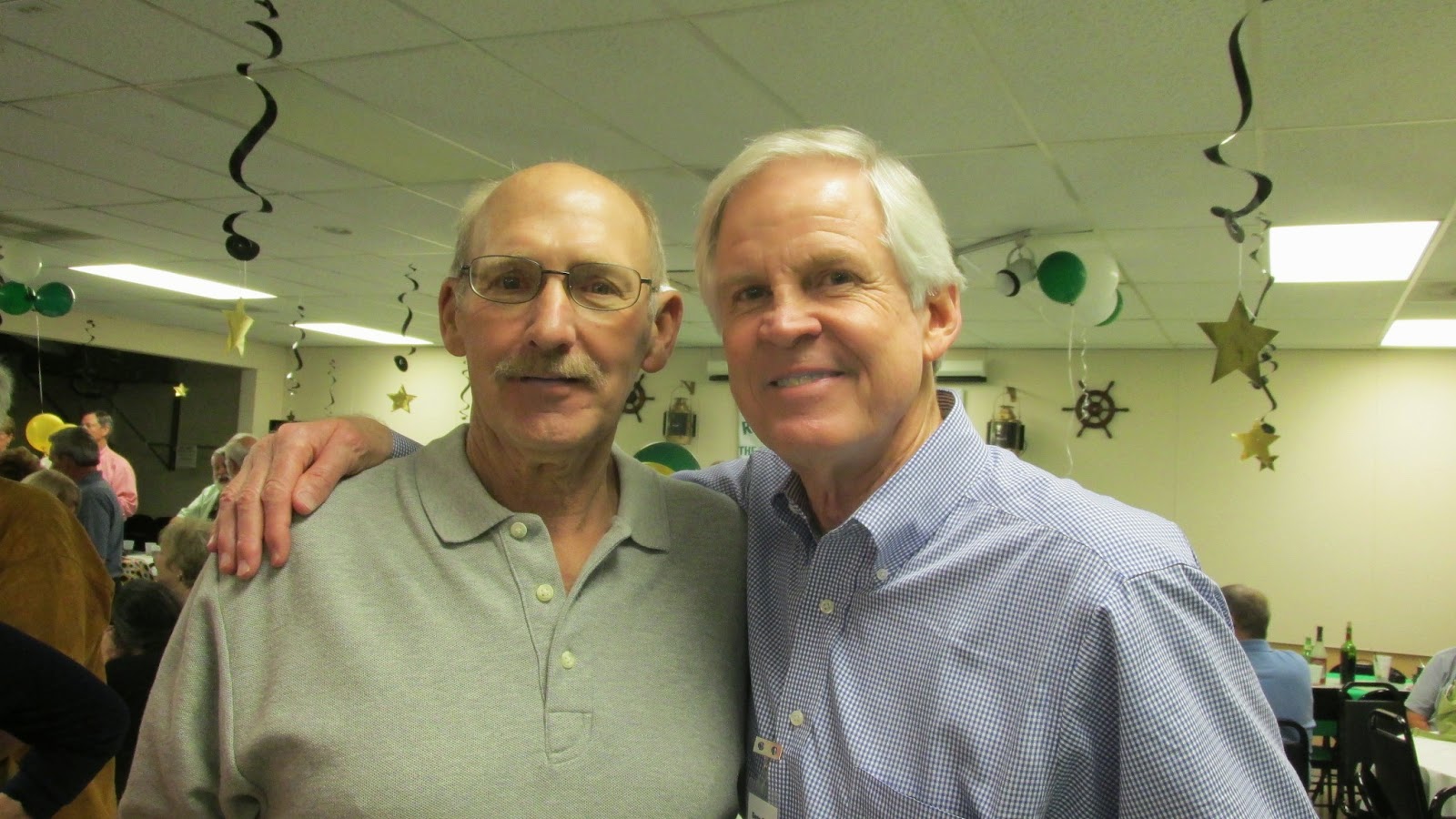 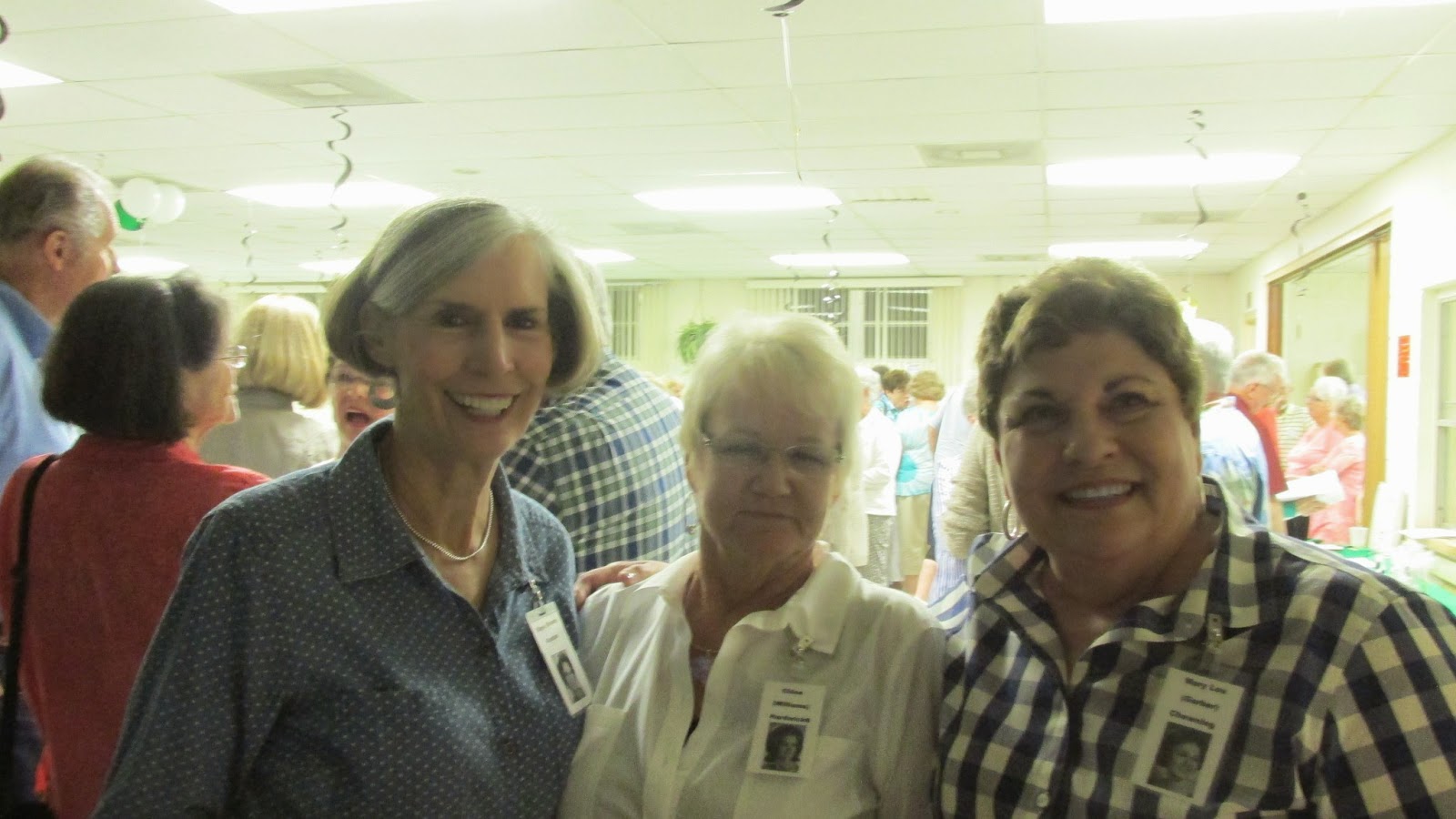 Mary Sue McGovern Coxe and husband, Doug--Mary Sue was one of my best friends in high school--she was our Valedictorian, Homecoming Queen, Miss Ocala High School, Key Club Sweetheart, and lots of other accolades--and the most down to earth unassuming person you could ever meet.  They live in the mountains of southwest Colorado and we plan on stopping to see them on our way west. 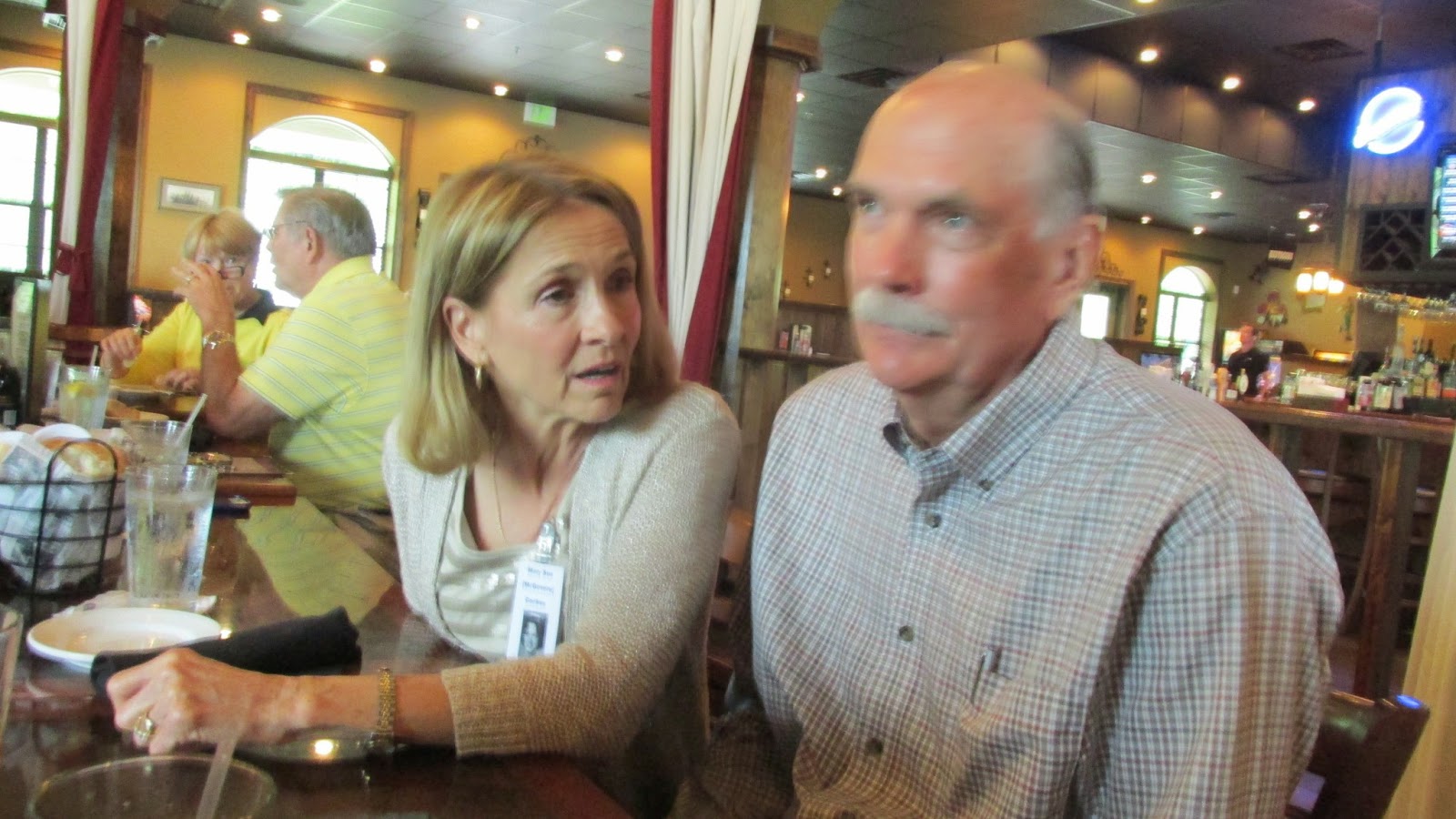 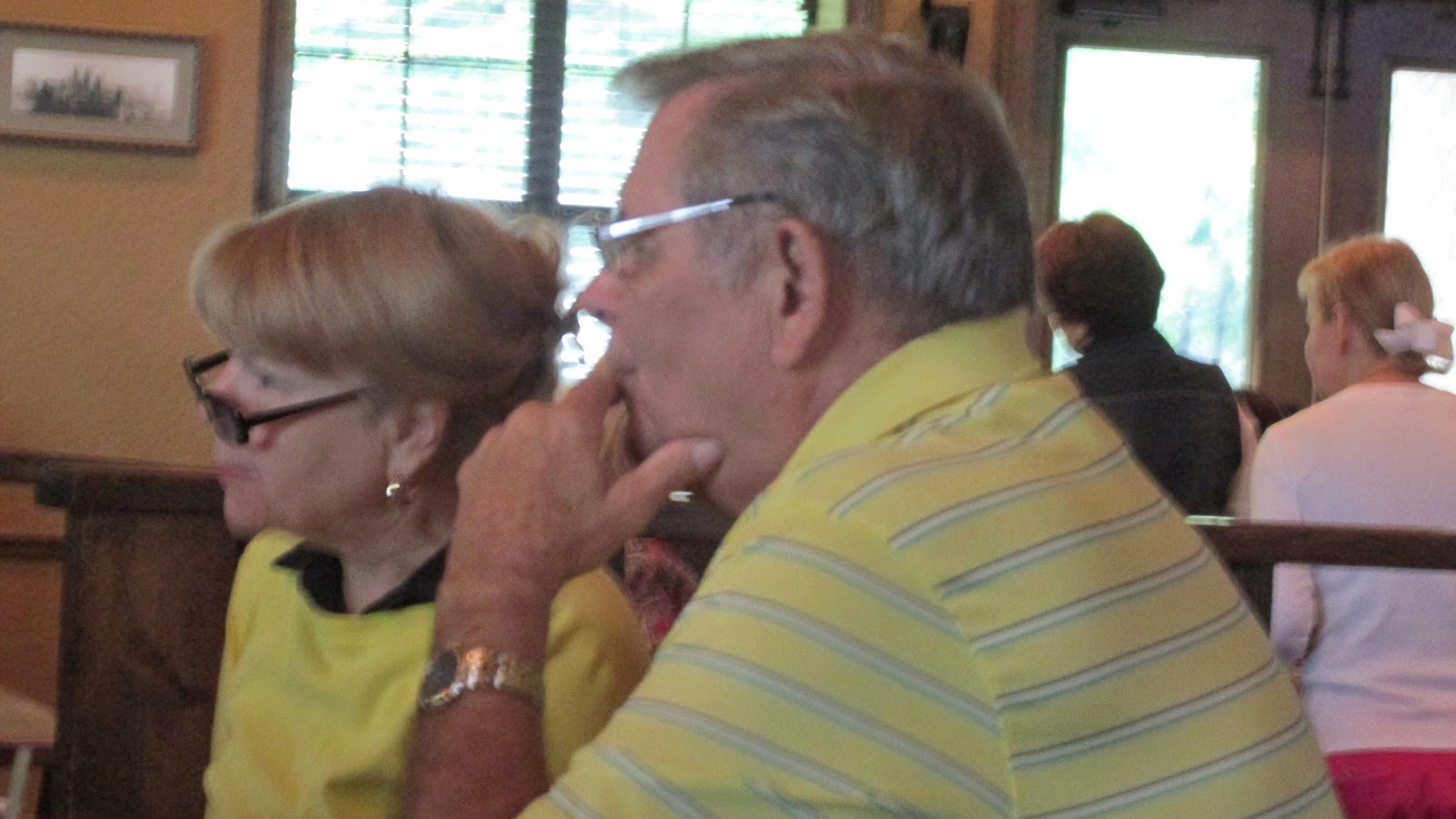 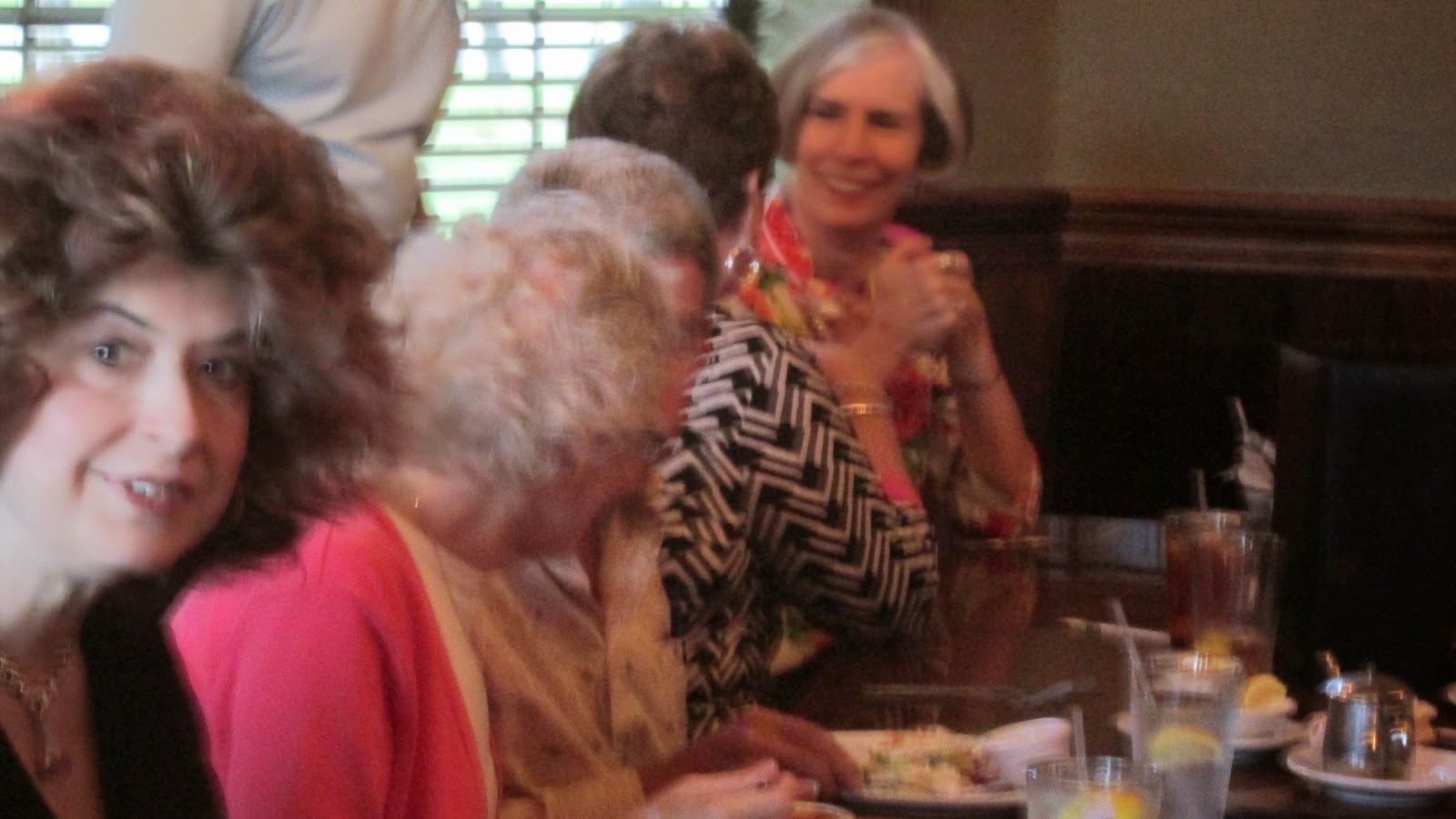 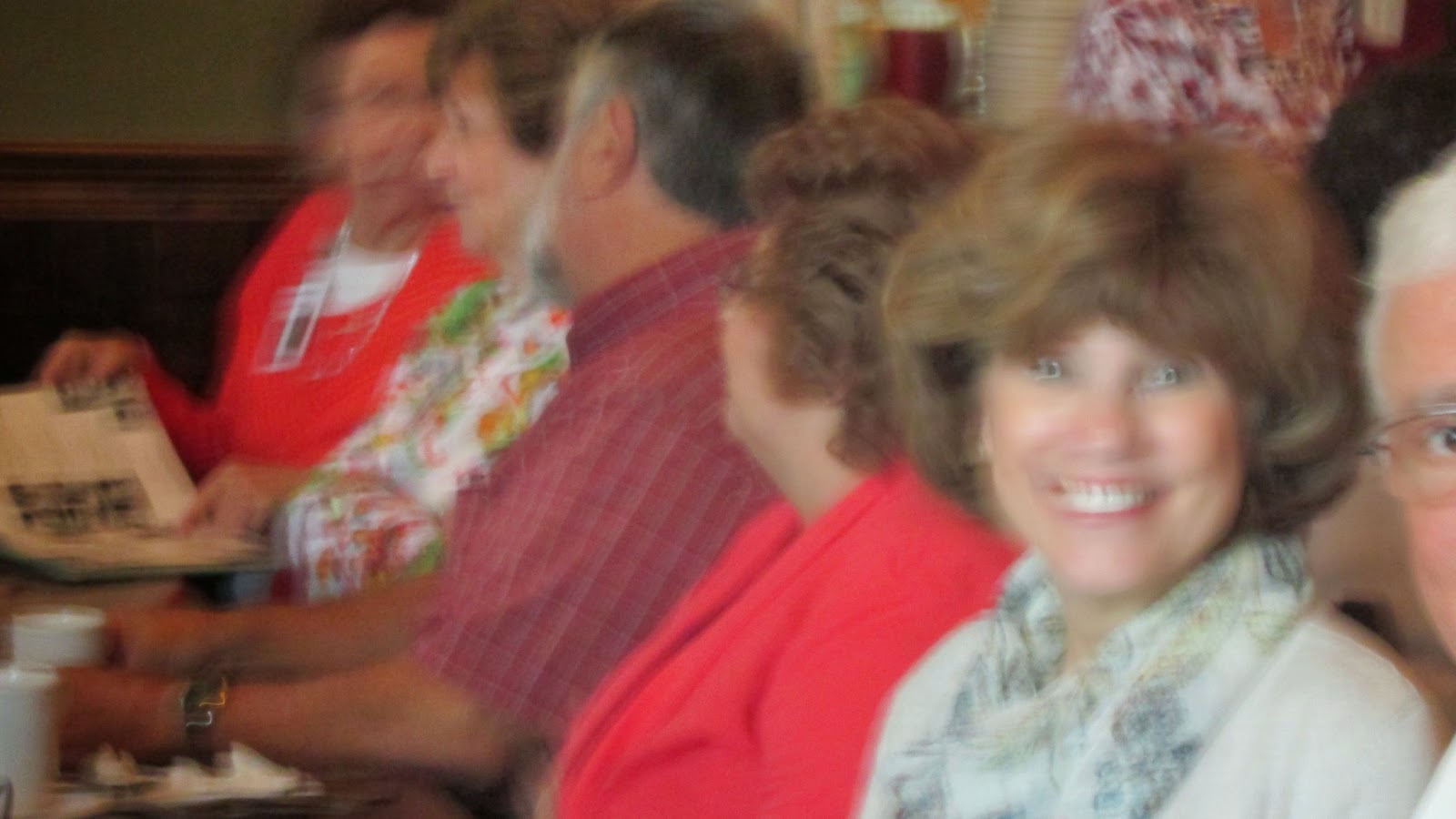 Luis Bellina--who escaped from Cuba and came to our high school with little more than the clothes on his back, and is such a delightful person. 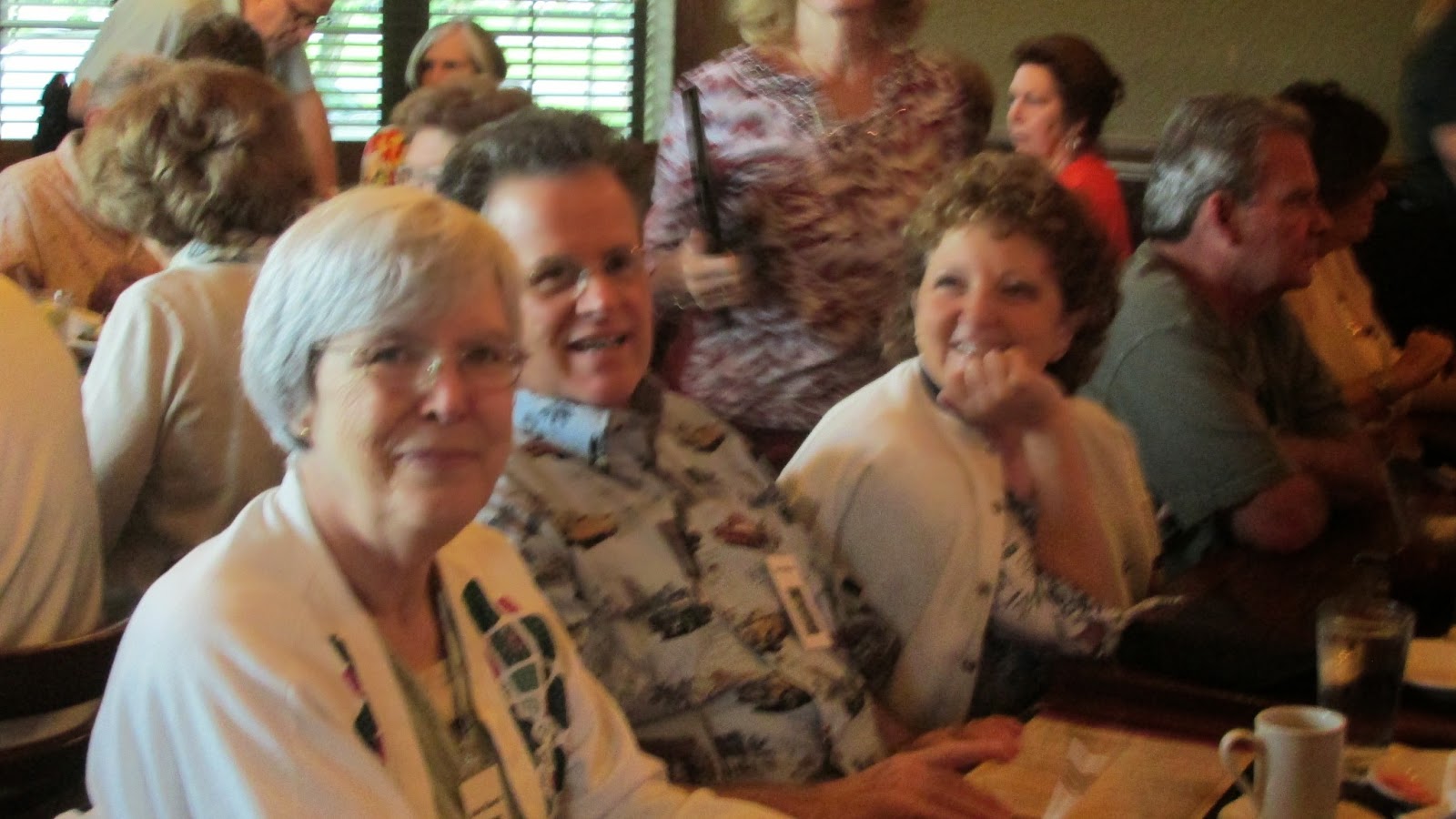 Bettie Bradley and Sandra Spencer--Bettie was the star majorette for the band. 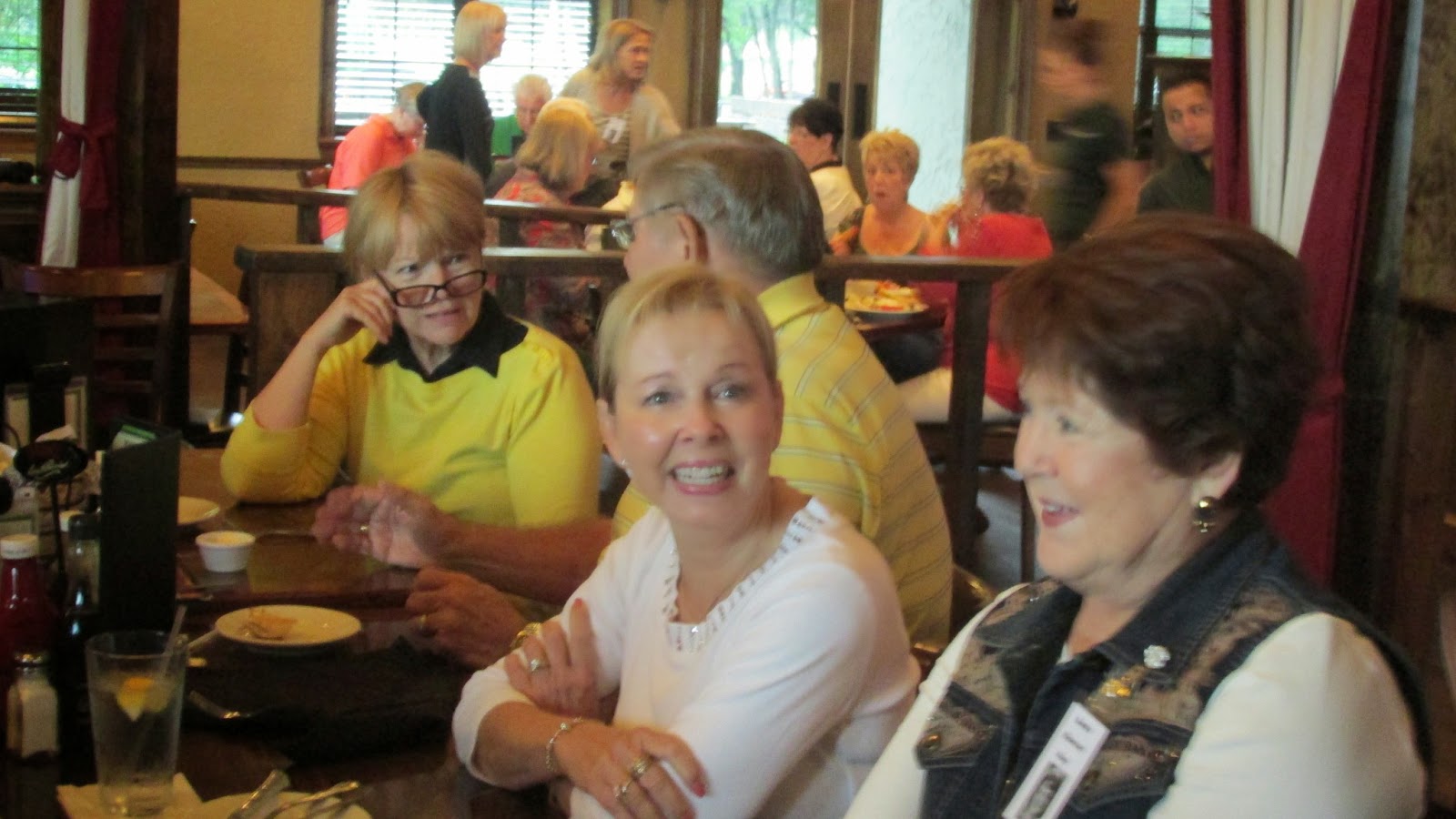 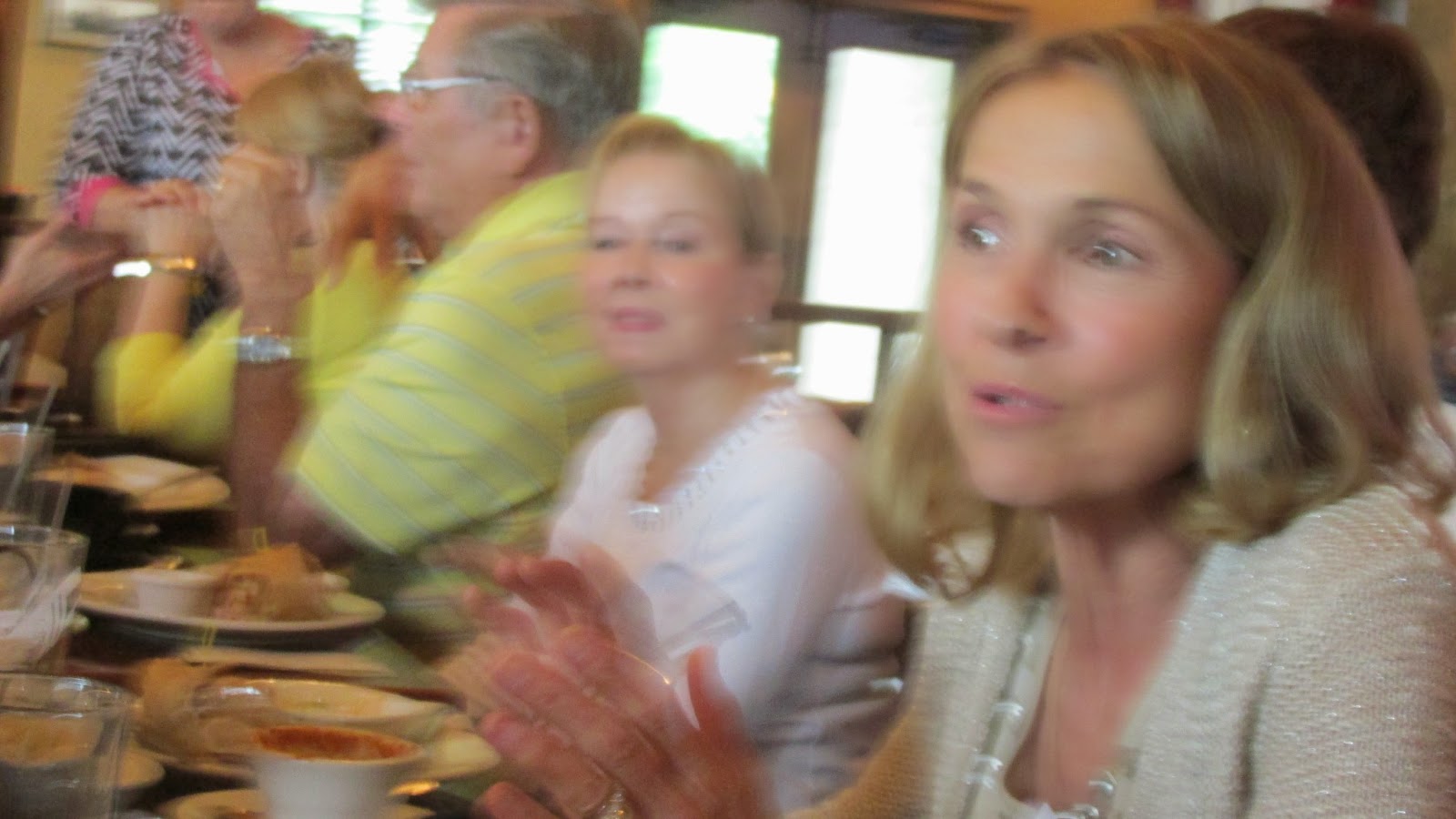 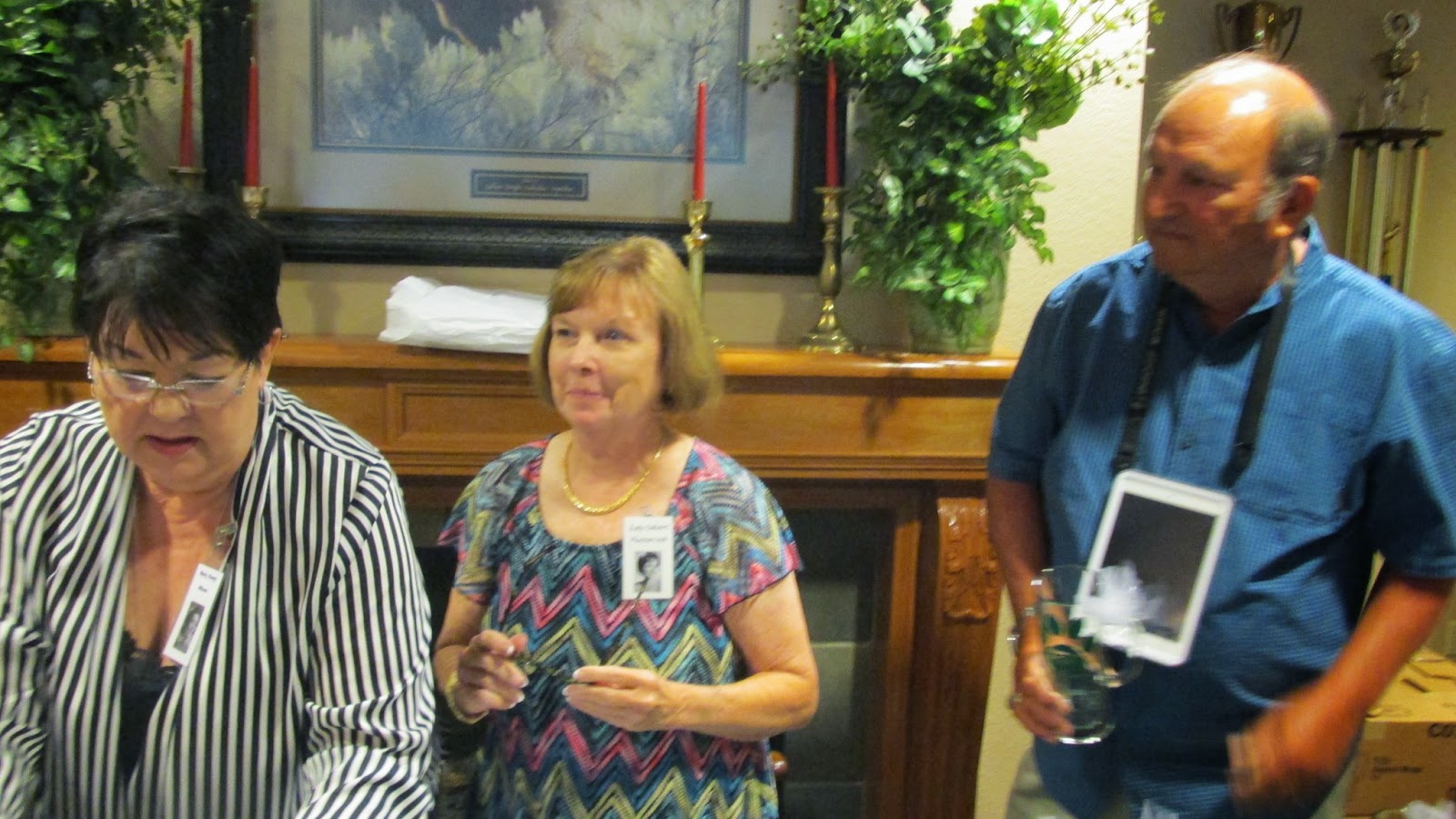 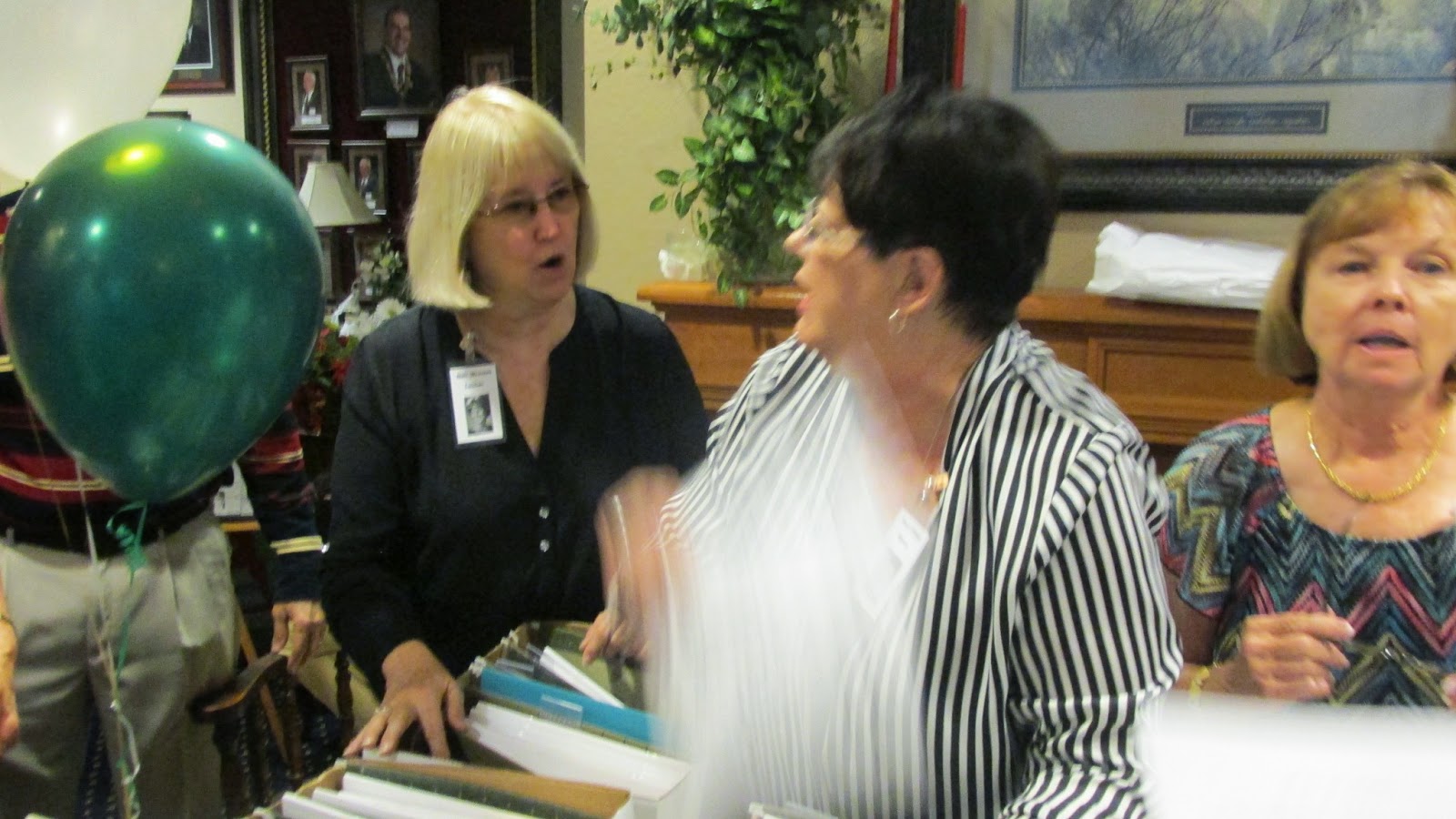 Wayne, emceeing the Saturday night event, and reading the names of our deceased classmates--49 out of a class of a little over 300. 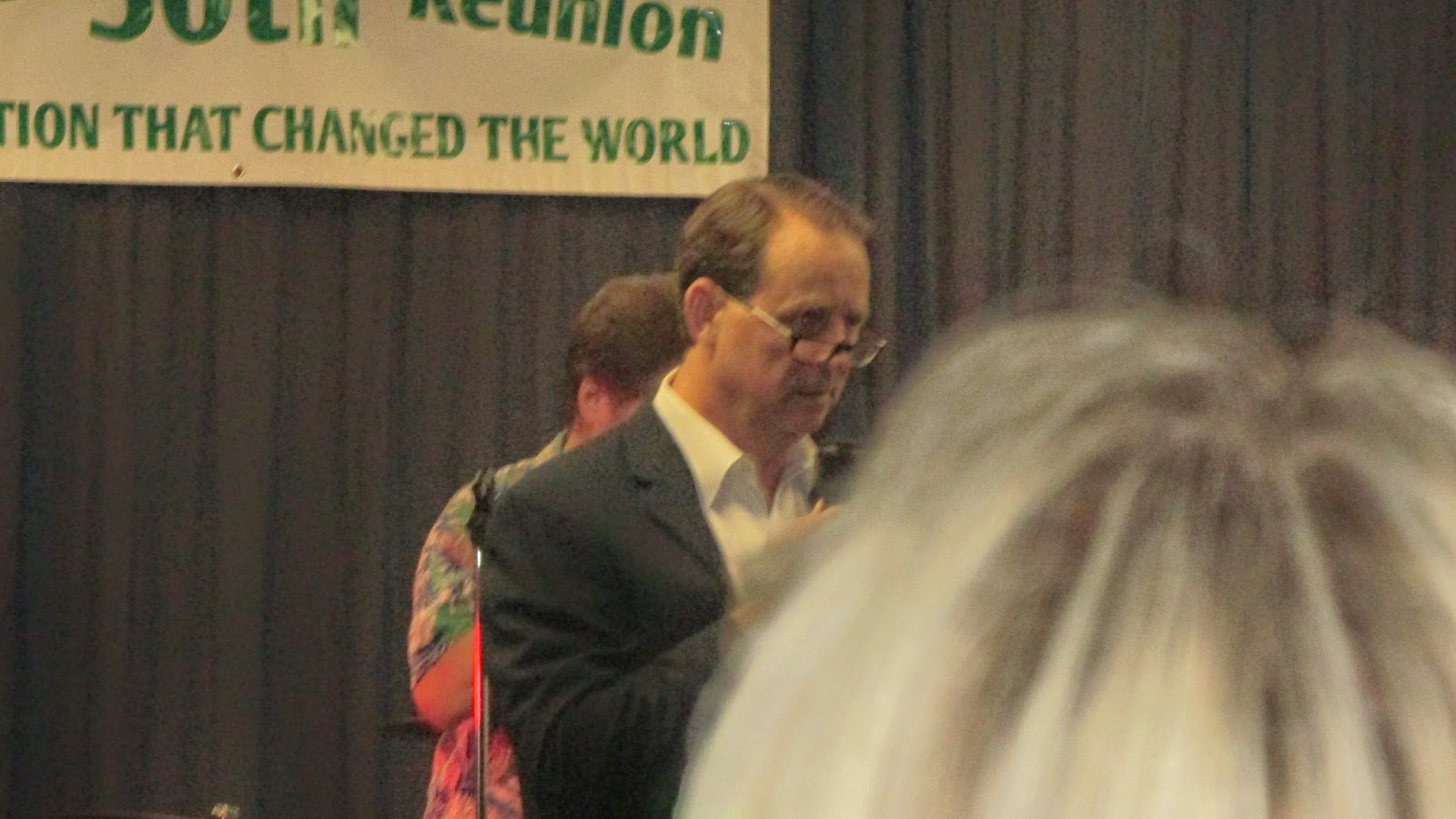 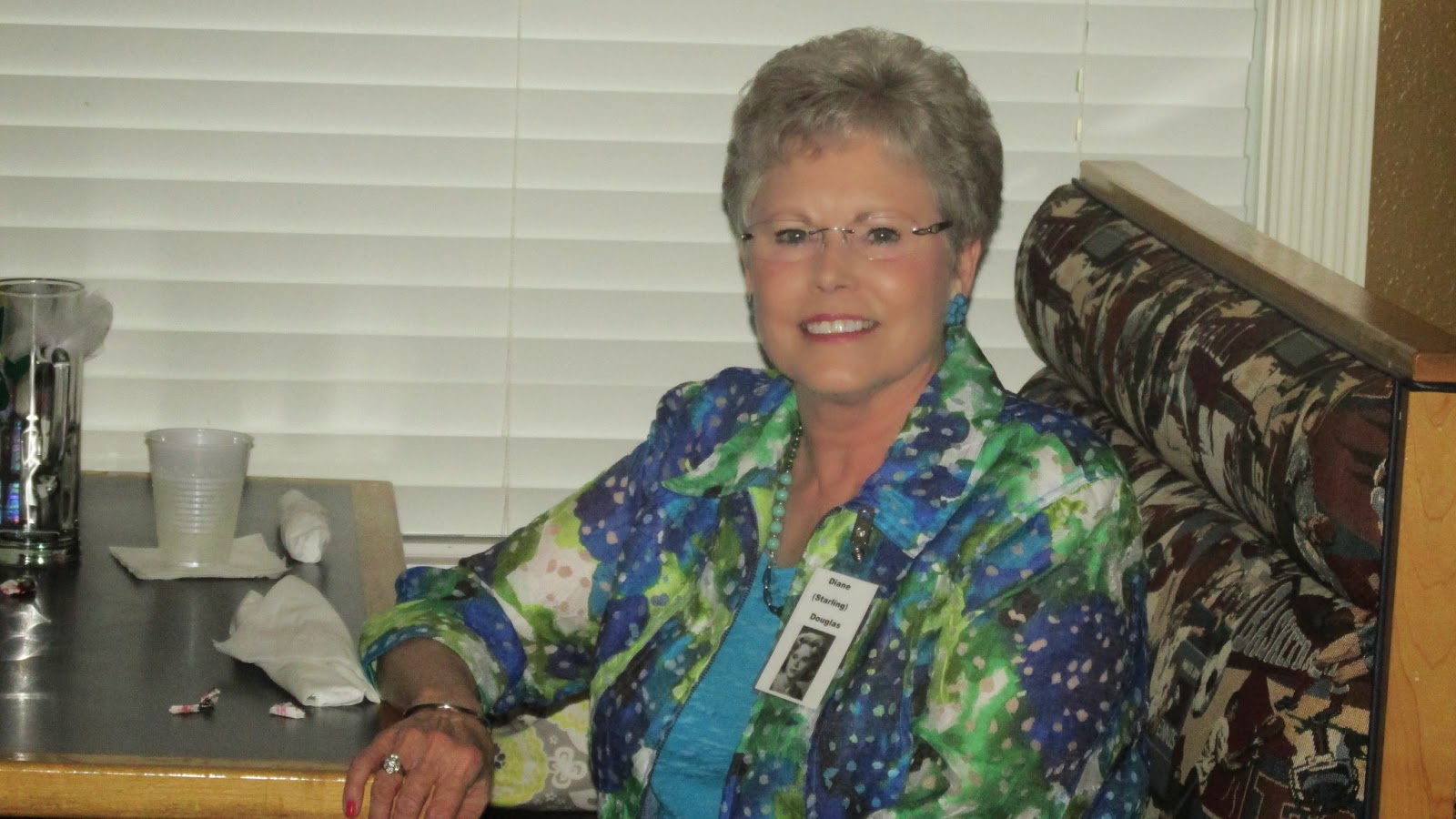 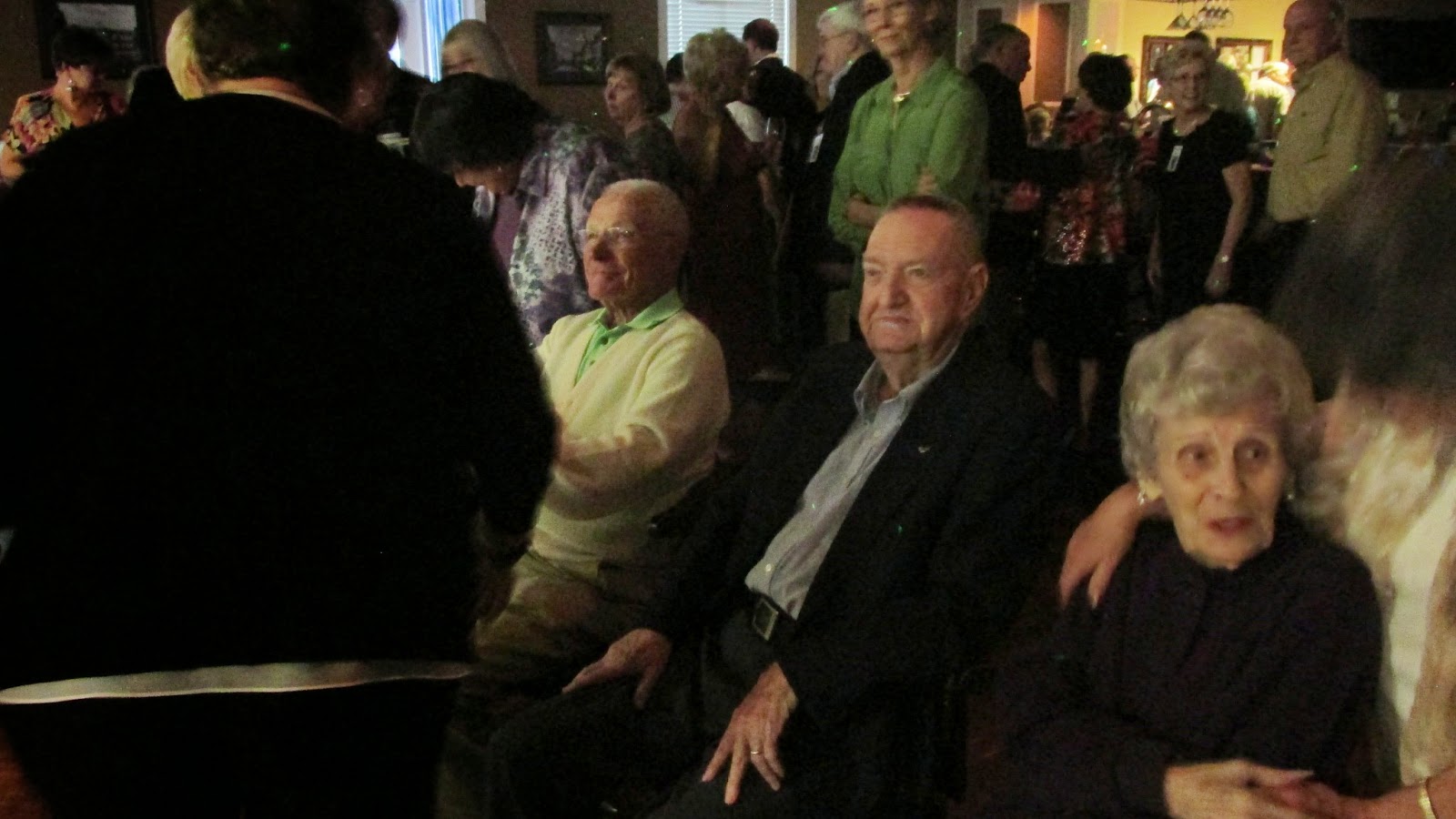 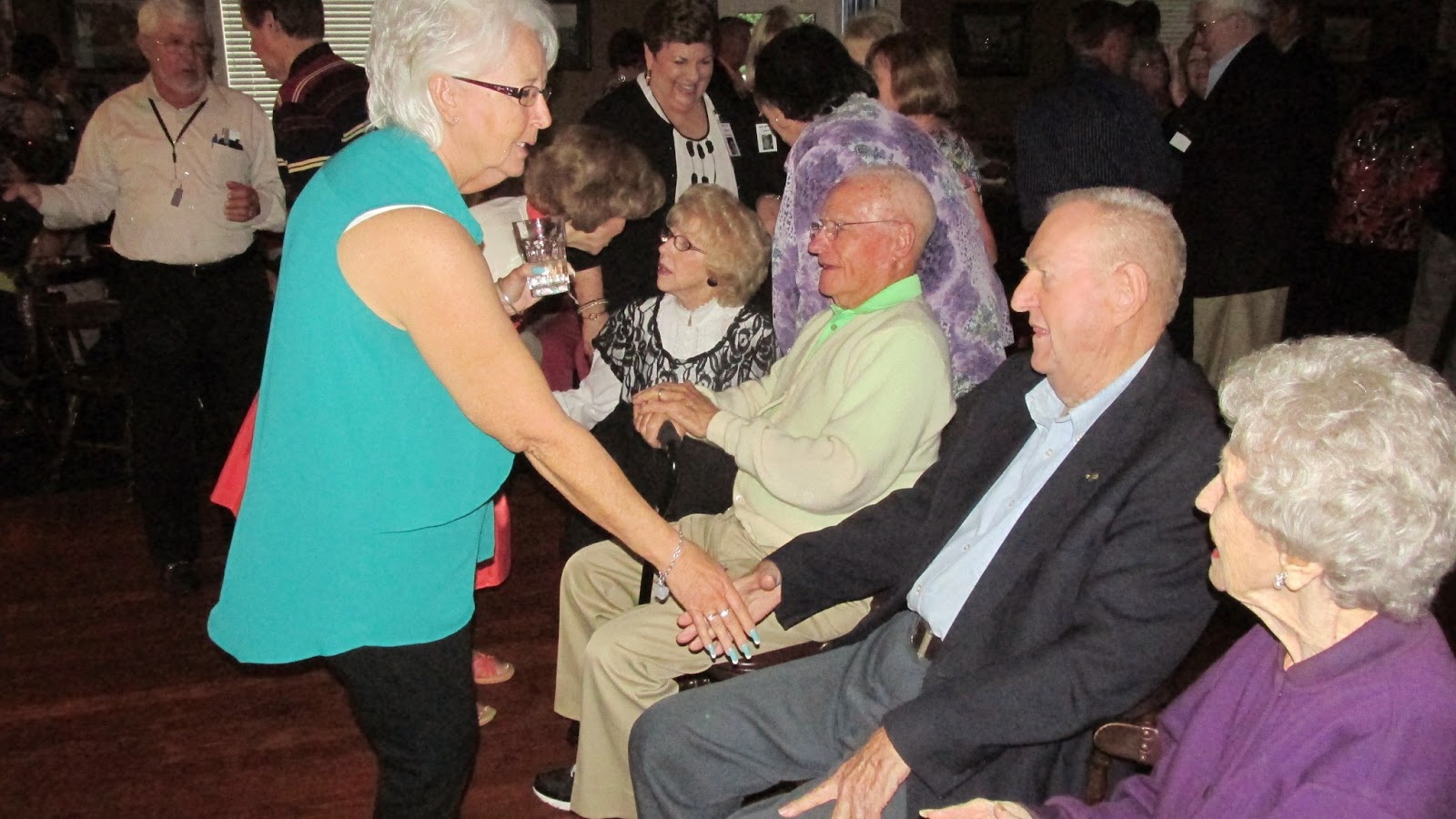 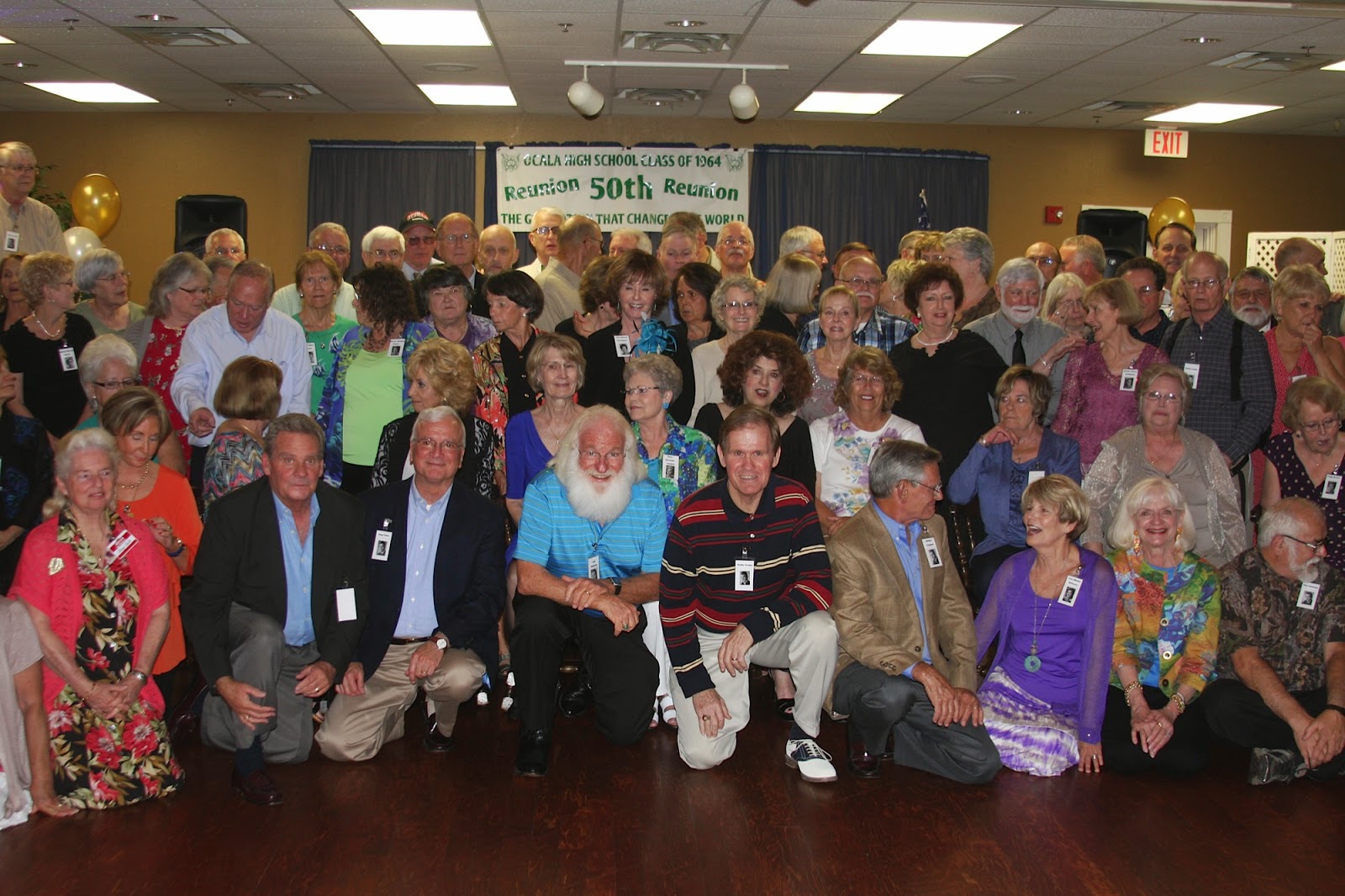 Above, trying to get all of us to behave long enough for a group picture was a real challenge for the photographer!

Below:  Mary Lou Garber did such a wonderful job of putting together the tribute table for all of our deceased classmates 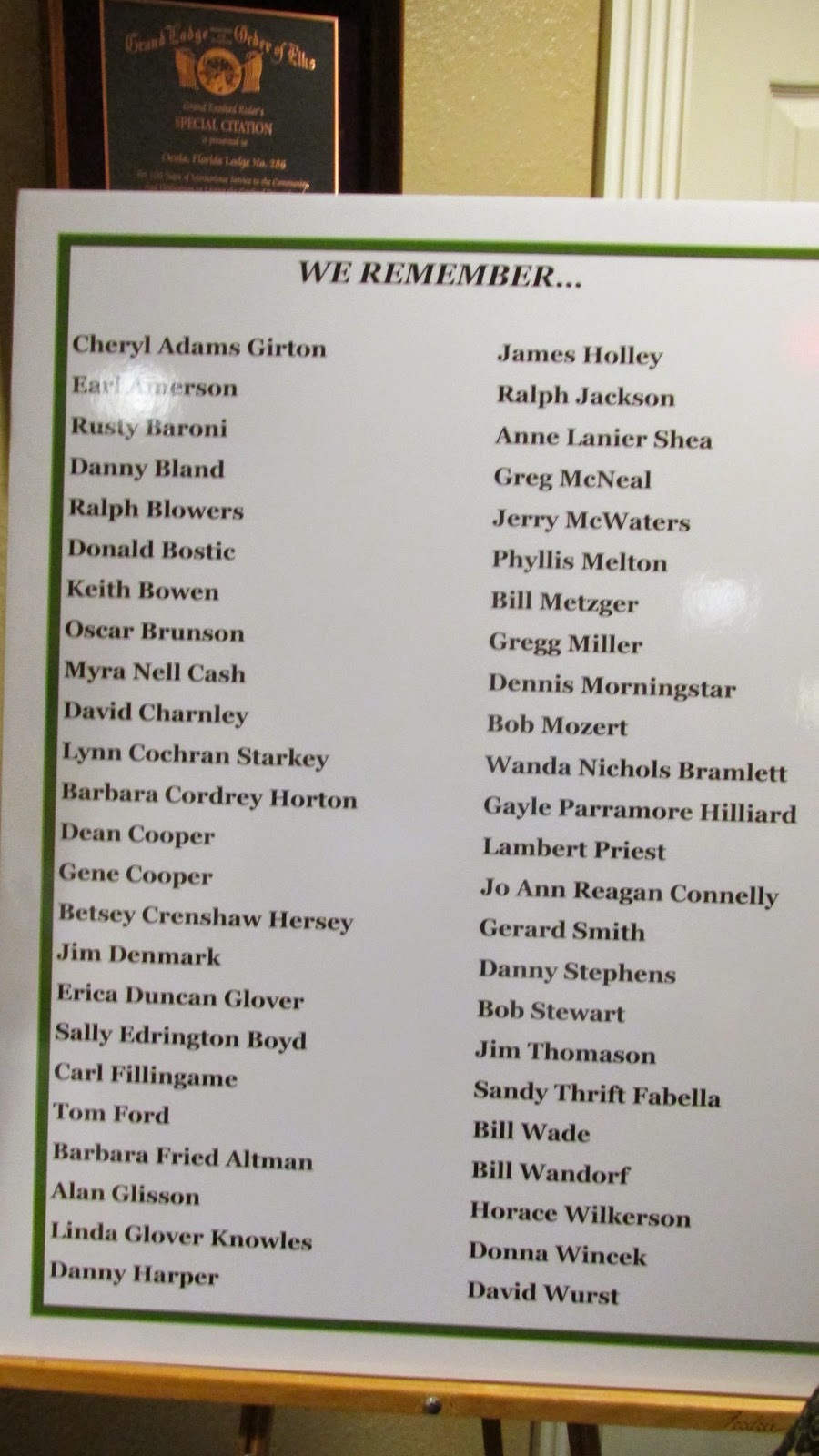 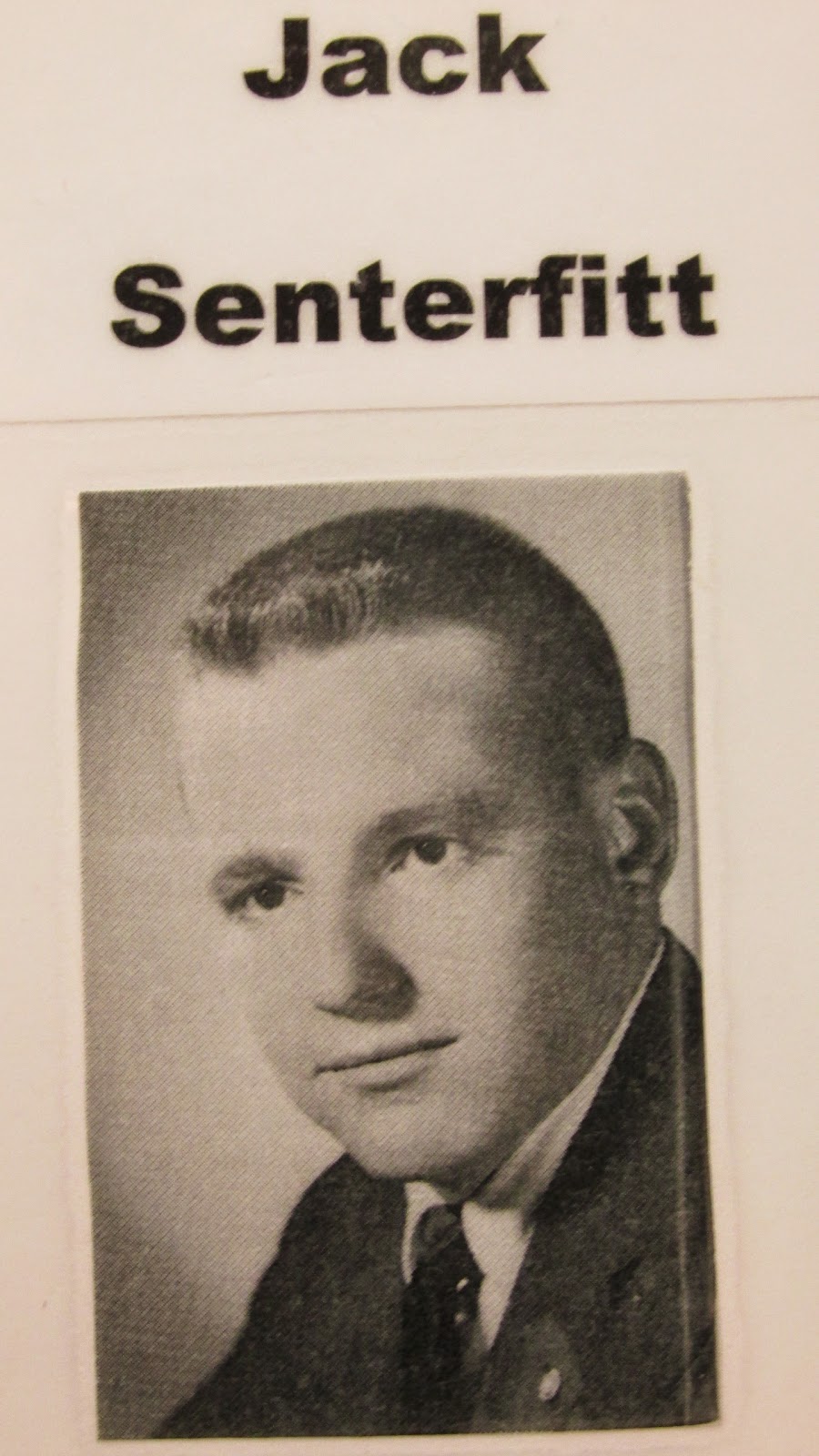 the house where I grew up 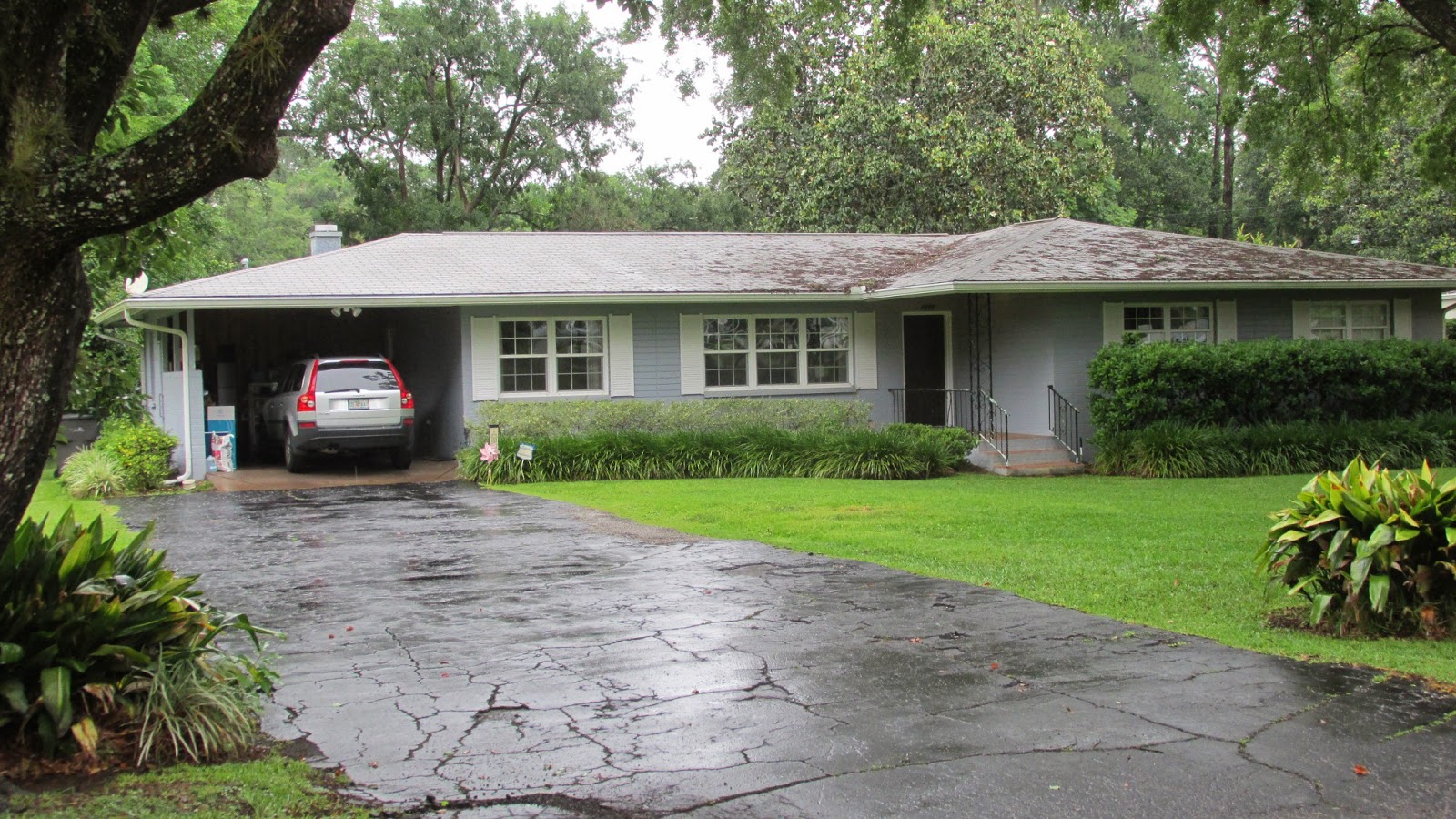