Wednesday we woke up in Flagstaff to a beautiful day, very refreshed after a good day on Tuesday, and--hallelujah--the wind had calmed, as had been predicted  We were so happy about that, after Monday's challenging drive.  So off we went, now once again driving through some familiar territory from last year's trip.  We stopped in Williams to get gas, and drove down to the Grand Canyon Railway Depot, near where we stayed last year while visiting the Grand Canyon.  Brought back some wonderful memories of our time there.  It's really hard to adequately describe this phenomenon of nature--okay, more like impossible.  Just takes your breath away with its massiveness and ever changing light patterns and infinite beauty.  Anyway, so glad we got to spend some time there last year, and look forward to coming back when we have some more time to explore its many facets.

Soon after leaving Williams we drove into the Mojave Desert, which covers part of northwestern Arizona, and it extends into southeastern California, in addition to parts of Utah and Nevada.  You know you are in the Mojave when you begin to see Joshua trees, and they were all around.  It's interesting to realize how different my original conception of a desert was from the reality of this desert.  I suppose my first concepts came from movies like Lawrence of Arabia, picturing all deserts as just vast expanses of sand, with no vegetation.  While there are parts of the high desert (generally refers to elevations above 2000 ft) in the Mojave that are all beige colors, sandy ground, with just a few little low-lying bushes, etc., there are also parts of the desert that have much more green than I would have earlier associated with a desert.  And we went through Victorville, a city of over 100,000.  The drive was very nice, and such a relief to be driving without having to fight the cross winds.  We spent the night in Barstow, CA, at a nice KOA campground--I guess I should correct that spelling to "kampground" to be consistent with KOA lingo!  As I was checking us in I was telling the guy in the office about our experience two days before with the winds, gusting up to 56 mph according to the news.  Well, he said that was nothing--a few days earlier they had had winds much higher, and a dust storm he said was so fierce that he could not see parts of the campground.  There had been a number of accidents on the highway as a result, so I sure am glad we missed that!  Given what he was describing, I'm sure we would have simply pulled over where we could and stopped.

As we were hooking up we met a lovely couple from Australia in the site next to ours.  They had rented an RV in San Francisco and they were on a tour of Yosemite, Yellowstone, Grand Canyon, Zion and some other national parks.  They were having a ball and we really enjoyed talking with them, and sharing stories of our visits to these parks.  It's just so much fun to meet new folks in campgrounds, we love learning of new places to see and to offer our suggestions and observations from our experiences to others--one of the aspects of this lifestyle we really do enjoy a lot!  Had a lovely dinner, once again enjoying this sweet white corn we had bought in Flagstaff, using the husk-in method--I'm telling you, folks, this is one of the best discoveries we've made for cooking corn.  So easy; no muss, no fuss, no annoying silk strings  to deal with.

Thursday morning we took a good long walk out along Ghost Town Road, toward Calico, where they have an "authentic" ghost town, as the ads say--rather amusing to me to call a ghost town authentic, but there you have it.  Anyway, it was 3 miles away, so we didn't make it all the way, but it was good to get out and stretch our legs before we hit the road once again.  We wanted to be sure we got on the road to make it into the greater LA area before the rush hour traffic got too heavy--although my observation of traffic in LA is that it is virtually a nonstop rush hour, just some times it's heavier than others!  Anyway, the trusty in-dash GPS navigation system got us to the RV park just fine, and without too much traffic.  As we were driving into the LA area Trisha was checking on the work of the Presbyterian Church(USA) General Assembly when she burst out crying tears of joy over  the vote to allow clergy to perform marriages for same-sex couples.  We are both thrilled with this decision.  We're staying at the same place we spent one night last year, in Anaheim, just down from the main entrance to Disneyland.  It will be very convenient for us, not too far from our college friends' house, and very close to the park when our grandson comes next week.  We were given a back-in site, but interestingly enough it's a space that's right on the street, so backing into it meant backing across a lane of opposing traffic.  The check-in folks were kind enough to get one of their employees to accompany us to the site and help guide me in.  Trisha got out to help as well, as the way the sites are designed, there is a raised concrete patio for the picnic table and the spot to park the toad, next to the slot for the RV, which is pretty narrow, with only a few inches of clearance from the raised patio on one side and the grass strip on the other.  Well, thank goodness I had taken the  driving course, as I was able to back it in just right--kudos and thanks to Jimmy Johnson, my instructor who spent several hours with me, having me back into different sites with various obstructions and tight corners at the campground in Alabama where I took the course.  So here's a plug for the RV Driving School--if anyone has or is contemplating a Class A motorhome, I highly recommend this course!

Last year when we were here my brother had found a vegan Vietnamese restaurant not too far away that we really loved, so we tried to find it again.  Not sure if it has gone out of business or what, but we couldn't find the place.  We use the Happy Cow app on the phone, and that's how he had found the place last year, but the only such places we could find were a good deal farther away from the park.  We went to one we thought it might have been, but turned out not to be the one.  It was very good nonetheless, and located in an area called Little Saigon.  The waiter's English was somewhat hit or miss, but we had some lovely varieties of spring rolls and a version of Kung Pao Chicken, made with tofu that was delicious!  It was funny, when he first came over to us, he went to great lengths to explain that this was a vegan restaurant, serving no meat--he was greatly relieved when we told him that this was the very reason we had come!  We were so hungry we ordered more than we really needed, so we have some good leftovers for today's lunch!  There were two Vietnamese guys sitting at the table across from us, and since the place was quite small, the tables were pretty close.  One of them spoke impeccable English, and he was giving us many suggestions of other vegan restaurants to try--one vegan pizza place that's definitely on our list!  He was happy to learn that we are vegans and asked us if we knew about Happy Cow!  We told him that's how we had found this place; he obviously was a regular, as he was in and out of the small kitchen, talking with the staff.  We knew it would be good as we were clearly the only non-Vietnamese in the place.  Anyway this fellow  explained how there are some vegan restaurants in the country that are part of a chain called Love Hut, but that the menus are rarely the same from restaurant to restaurant,  depending on the menu preferences of the locale of the restaurant.  He pulled out his phone and said there was even one of these in Norcross, GA--who knew!  He told us about being in France, getting a recommendation of a vegan place, and when he got there, found only a couple of tables, only one employee, an elderly woman who said she'd had the place for 25 years--no menu, no choices just "this is what I fix today."  He was fascinated to hear about our RV travels, so it was a delightful evening.

Got back to the campground and enjoyed being able to open the windows for the first time on this trip for the cool evening air.   While it was quite hot earlier n the day, the evenings are almost cool enough for jackets.  Then, as a wonderful way to end the evening, we went outside to enjoy the nightly Disneyland fireworks display.  They do this every night at 9:30 for about 15 minutes, and everyone was sitting outside their RVs enjoying the show.  We had remembered this from last year, and can't wait for our grandson to be here to enjoy it as well.  Sophie, however, was none too sure about this event--Trisha was holding her tightly, as she was shaking pretty badly--hopefully she'll get used to it and not be so scared.  All in all, a great start to our time in California!

The locomotive engine for the train ride that goes up to the Grand Canyon, in Williams

Oops, forgot to get this shot when we drove into Williams, but did get it on the way out--just hold it up to a mirror, LOL!

Some highway scenery along the route

Love driving through these cuts in the rocks 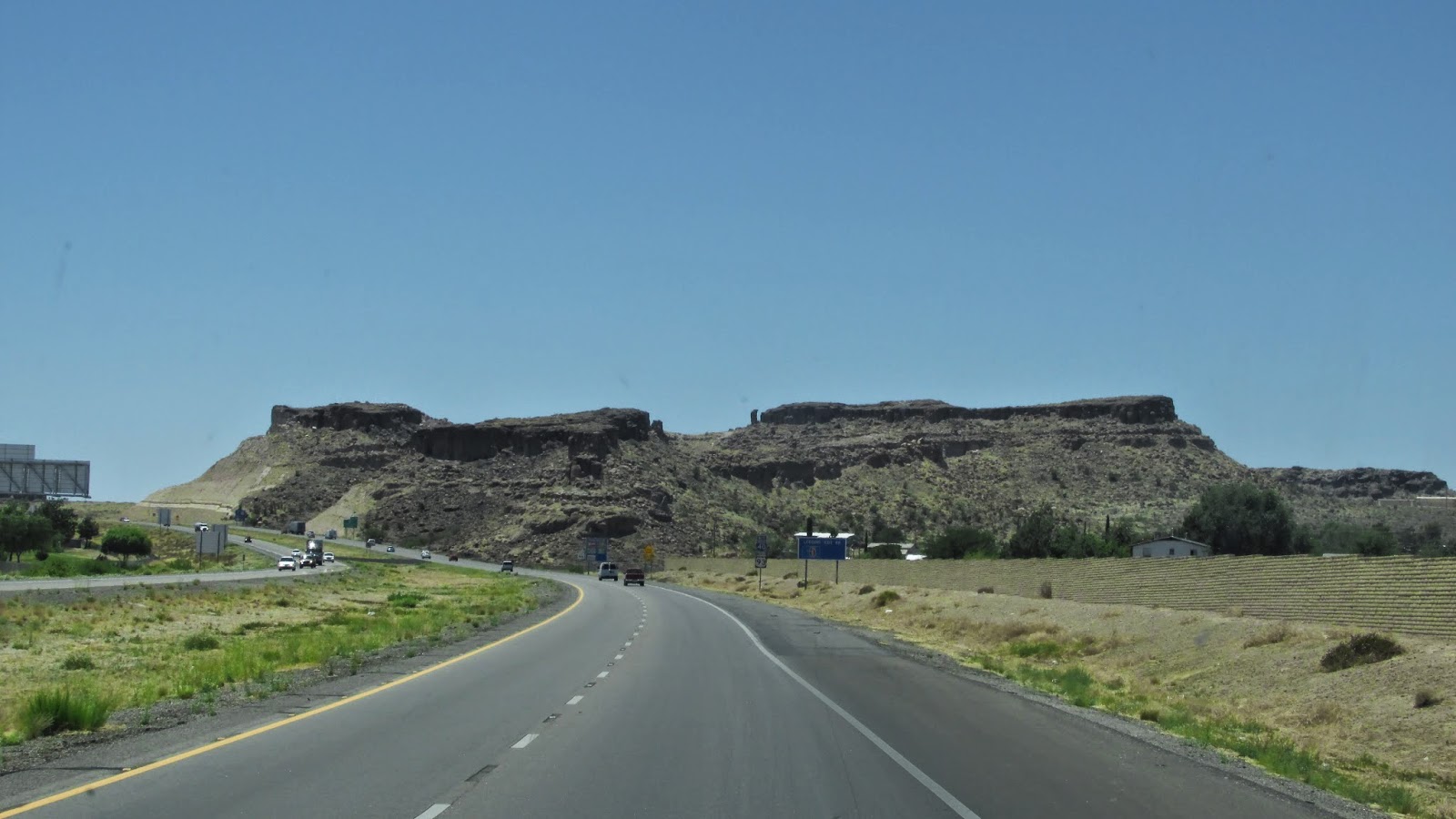 Crossing the Colorado River, right at the border between Arizona and California, near Needles

In Barstow, on our Thursday morning walk

Typical California scenery with the mountains