On Monday, we had to stop in Billings to get some work done on the RV, so while we waited we drove out to tour the site of the Battle of Little Big Horn, or Custer's Last Stand.  The setting is now quite picturesque, lovely countryside, with the river and the hills--hard to imagine the scene of such horrific fighting and death.  Every time we visit such places, it's a really tough conflict in my mind--I am certainly proud of my country and its heritage, but there are some chapters in our history that have brought to light the more unfortunate side of our heritage.  When I think about the westward expansion of the US and remember being taught about "Manifest Destiny," this is especially true.  When I was hearing about this doctrine in school, it was presented as being the natural, divinely ordained order of events, when in reality it was a political and moral justification for taking the land of those who had inhabited it for eons when we got there.  I try to imagine what we in the US today would do if some foreign powers landed on our soil and said, it's our manifest destiny to take your land, your resources, your way of life and force you to live in certain areas we dictate.  I don't think we would view this with a great deal of enthusiasm.  So it's really no surprise that the Indians resisted, specifically in the events leading up to this famous encounter in 1876.  The Second Treaty of Fort Laramie in 1868 had guaranteed the Native Americans exclusive possession of the Dakota territories west of the Missouri, but when gold was discovered on these lands, white prospectors flooded the Indian lands and the US government tried to renege on the treaty.  They wanted the Indians to just give it back, but the Sioux and Cheyenne, along with other tribes refused, and the conflict ultimately led to this battle, with Custer and his men all being killed.  This led to the Army sending overwhelming numbers of troops and the Indians were ultimately defeated.  The  memorial there was quite interesting, and they have a cellphone tour you can follow along as you drive through the battlegrounds, describing the various movements and encounters.  It was a very hot day, so we were glad we could do the tour this way.

Driving back from the monument area, we stopped at a little drive-thru coffee stand, on the reservation, and some of the buildings there were quite depressing--what appeared to have been a motel at one time was converted into apartments and small businesses, and it was all in such a state of disrepair--very sad.

Anyway, we got back to Billings, and since we needed to spend the night there while a part was being shipped in, we found a delightful Indian restaurant very close to the shop where we were, and enjoyed a delicious dinner.

Tuesday morning we were back on the road, and drove to Theodore Roosevelt National Park in North Dakota.  We originally had planned to go to Glacier National Park after leaving the Billings area, but, after looking at the map and our remaining time on the road for this year, we decided to put Glacier on next year's agenda, since we will have a good deal more time in this area of the country.  I may have mentioned that we've already signed up to spend the last week in May as volunteers at Ring Lake Ranch, so we're tentatively planning to spend some more time in the Wyoming/Montana area then.  So we made it to Roosevelt Park and spent the night there.  It's a lovely park we enjoyed being there, but we decided to head on the next day so we could be in the Apostle Island National Lakeshore for our anniversary weekend.  We had discovered this place last year, quite unexpectedly, and just fell in love with it.

So we spent Wednesday driving across North Dakota--still a long drive--but made it to Detroit Lakes, MN Wednesday night.  Minnesota is called the Land of 10,000 lakes and it's no exaggeration.  There are lakes everywhere, and so beautiful!  Thought about trying to keep count of the ones we saw, but that lasted about 15 seconds!!  Anyway, we found a delightful place to stay called Country Campground--spacious sites, lots of open areas for playing ball, etc., and the staff was very, very nice--it's a husband and wife team, along with their daughter and her husband.  Remarkably, they are named Elwood and Lois, the first names of some dear friends of ours in Georgia, and the younger couple are Todd and Karen, the same names as our son and his wife--how cool is that??!!  As we were leaving, Todd asked if he could take a picture of Santa and Mrs. Claus, and he's posted it on the campground's Facebook page--what a hoot!!  As we drove to this place we kept noticing huge fields, dotted with what appeared to be portapotties and some lights, looked a lot like parking lots at a fairground--well, we learned from the owners that in a couple of weeks the area is home to the annual WeFest, a country music extravaganza that attracts tens of thousands of visitors.  These areas are set up as huge campgrounds for fans.

Thursday we drove to Bayfield, Wisconsin and we're so happy to be here!!  We got to the same campground where we stayed last year and the owners were glad to welcome us back.  We didn't have time to get downtown before the smoked fish market closed, but we'll definitely have a bit of that before we leave.  We did stop at Coco's in Washburn, about 10-15 miles from Bayfield, to pick up a couple of their delicious vegan breakfast bars--we had found this little jewel of a place last year and ended up eating two or three meals there.  Wonderfully creative vegan alternatives to the regular carnivore menu selections, and their breakfast bars are to die for.  When I went in there was a couple up at the counter trying to decide what to get; I just grabbed the breakfast bars and as I was waiting for them to make their order, the woman said, if you know what you want already, why don't you go on ahead of us, since we're trying to decide.  I said I just wanted these two little pieces of heaven, and described them to her--the sales clerk told me she should give me a commission since I was helping her sell them!

On the way to the campground, we passed the turnoff for the Big Top Chatauqua, where we had seen Leo Kotke last year, and were excited to learn that Saturday night Lyle Lovett and his Large Band will be there, so we stopped and got tickets--woohoo!  Trying now to decide what to do today among the vast array of choices of wonderful things to do here in this gorgeous paradise!  Will let you know later what we did!!

Starting out at the visitor center at the battlefield memorial; you can see some of the gravestones in the right of the picture; these are actually part of a national cemetery, in which any veteran or their spouse can be buried 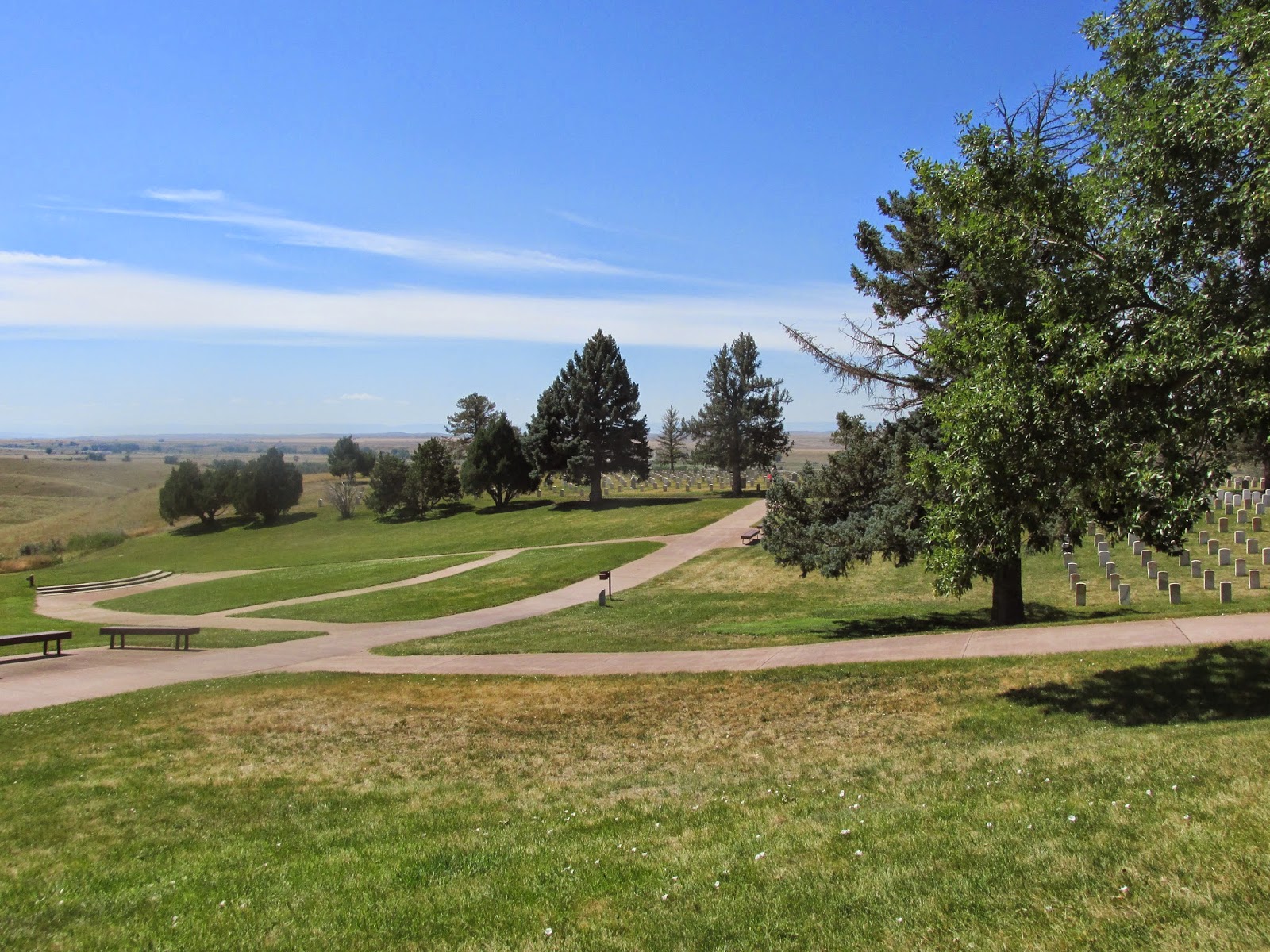 Looking out over some of the battlefield terrain; you can see the Little Bighorn River here 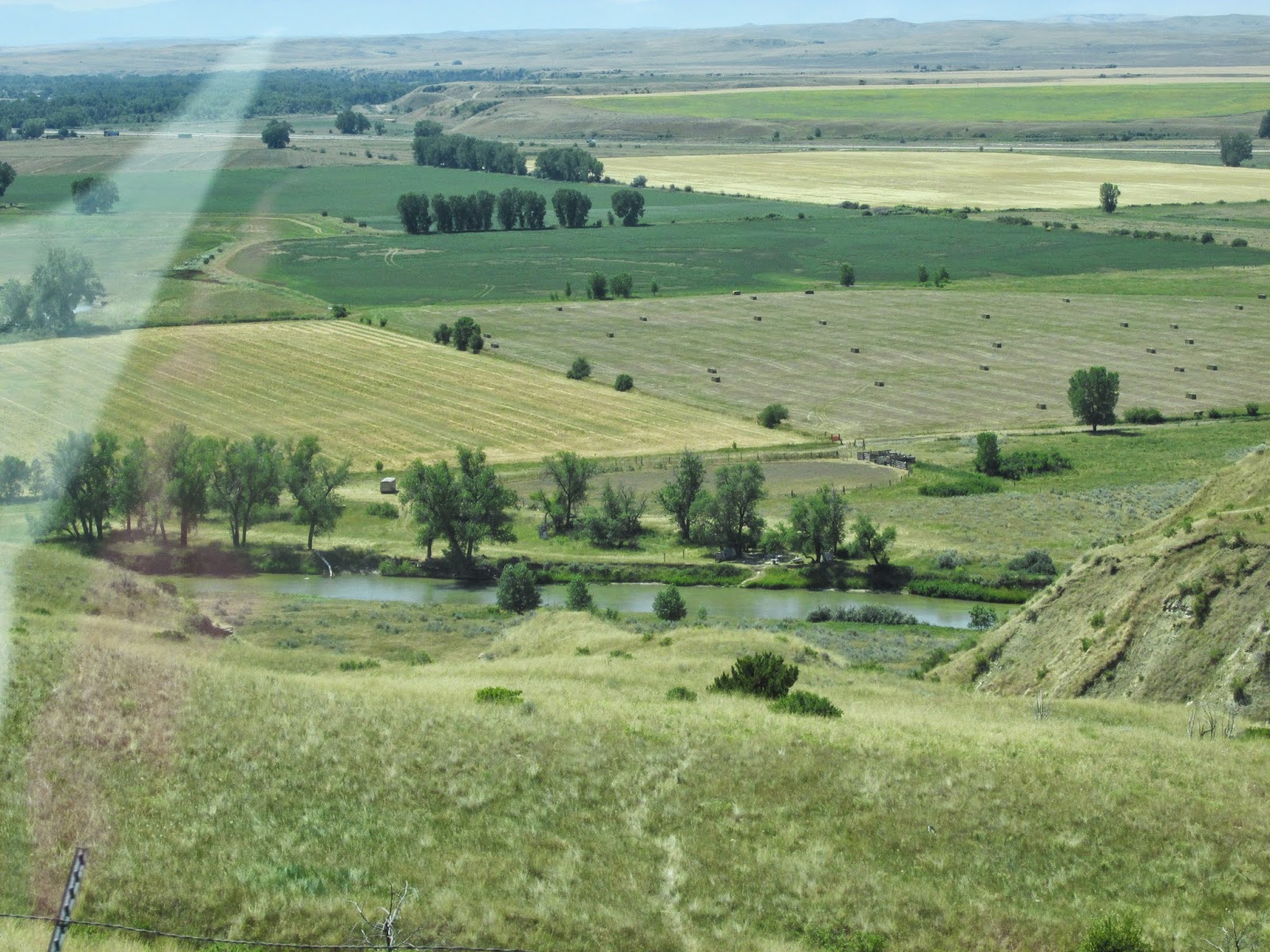 Look closely, you can see a cow crossing the river 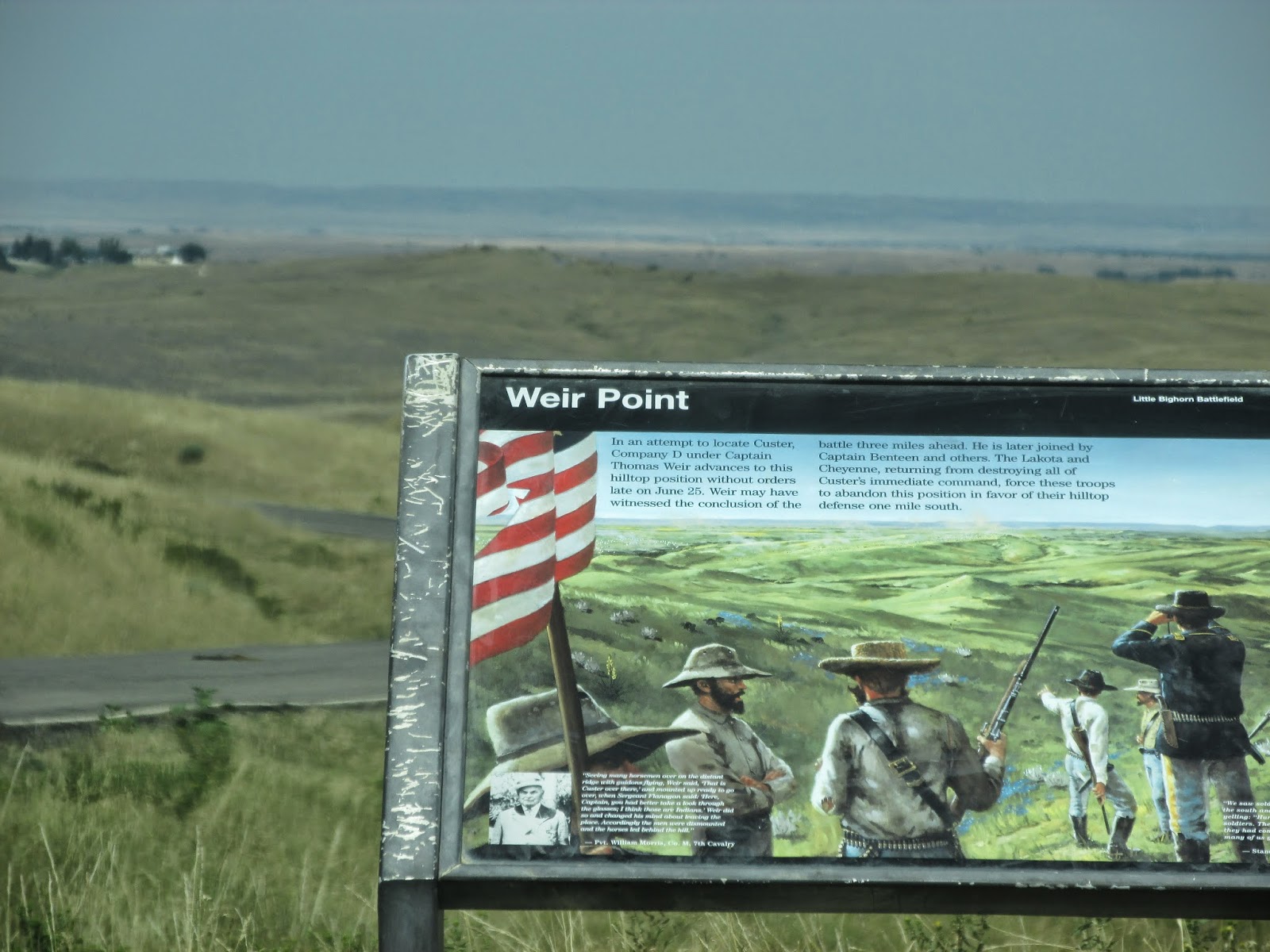 Looking down on the visitor center

The gravestones of the cemetery

Throughout the battlefield, they have gravestones placed where individual soldiers died

Riding back from the battlefield, this is at a gift shop/restaurant, on the reservation

Trisha said she needed a haircut, but was a little reluctant to try this establishment--Jack Morton, what do you think??

Interesting juxtaposition, the sign for the casino, right next to the church!

Landscape starting to change, as we neared the border with North Dakota--love these mountains!

Here we are in North Dakota

Driving through Roosevelt National Park, en route to the campground

Lots of wildflowers, this is near our campsite

There's a story behind this picture--Earline Crooke knows it!!

At lunch, Sophie decided she'd take a turn at driving the rig!!

So much rain, lots of flooding

Our campsite at Detroit Lakes