Well, hello to all those who follow this blog--it's been a while since I've posted anything, but now am ready to get back in the saddle and do some catching up.  When last I posted we had just returned to Cherry Log from our summer odyssey, but we left almost immediately for 3 weeks in Thailand.   Our son, Jeremy, teaches English as a foreign language in Bangkok and October was his semester break.  We had an incredible time traveling around this remarkable country, but especially spending this much time with him was a real treat for us.

The journey started out a bit inauspiciously, when our flight from Atlanta to Seattle--the first of a 3 leg trip--had to turn around just as we were taxiing out, due to a passenger who claimed she was ill and had to leave the flight.  Even though the EMT's came on with stretcher, etc., she walked off the plane with a big smile on her face--hope she was okay, but we missed our connection in Seattle to Tokyo by 10 minutes.  It was the delayed flight experience from hell, as the Delta folks in Seattle were anything but helpful.  They sent us to LA to spend the night, then a flight the next day to Tokyo, where we caught the same flight to Bangkok we were booked on the previous day.  Why they wouldn't just let us spend the night in Seattle and fly from there is beyond me.  Anyway, all this meant we lost a day in Bangkok, but we finally did make it.  What a relief to arrive in the Bangkok airport at midnight on a Sunday to see Jeremy and his girlfriend, Nok, who drove us downtown to the hotel.  Jeremy had found us a lovely hotel, right on the banks of the river that flows through downtown Bangkok.  Very pleasant to have breakfast each morning outside overlooking the river, and evening cocktails at the rooftop bar!

We spent a couple days touring temples and other sites in Bangkok, including one day when we took a trip to a floating market.  This was a fascinating experience--you ride in these narrow boats--the motorized ones are called long tail boats:  they have an automobile engine mounted on a long shaft that the pilot manually puts up and down into the water and moves the shaft to steer it.  The bus dropped us off at a "terminal" of sorts where we boarded long tail boats for a trip down the canals to the market.  Here we changed into smaller, narrow non-motorized boats, where the pilot took us up and down rows and rows of vendor stands, all along both sides of the canals; the vendors would hawk their wares, and if you showed any interest, they would use a boat hook to pull the boat over to the side.  In addition to things like baskets, clothes, carved wooden figures, etc., there were multiple food vendors, including some that were on boats, with small woks or hibachis, piles of different kinds of seafood, noodles, veggies, and you could order pad thai or other dishes from them.  Here I sampled some of the more exotic fruits that I'd never seen before--most of them were quite tasty, but a couple of them I decided I'd pass on in the future!

In downtown Bangkok, the river comes alive with commerce early in the morning, with lots of commercial barges being pulled by tugboats, along with tons of water taxis.  The big taxis are quite efficient:  once they come to a stop, the pilot maneuvers the boat next to the dock, a guy in the back giving him signals with a whistle to let him know when he's close enough for the back guy to jump onto the dock and secure the line to a cleat.  But they don't tarry long at a stop--you have to quickly disembark and the waiting passengers have to jump on and the guy gives another whistle, unhooks the tie line and they're off again.  Some of the taxis go up and down the river, but some just go back and forth across, quite a fascinating process.  The long tail boats are often decorated with lots of flowers and garlands across the bow and are painted in bright multicolors--and the fares are ridiculously cheap as well.

Jeremy took us to some of the huge open air markets where you can find everything from clothes to souvenirs to food.  Some of these are quite crowded and, I must admit, the huge piles of squirming eels or other worm-looking things were not the most appetizing to our eyes, as well as some of the fried meats--all combined to make a cacophony of smells that at times was a bit overwhelming.  But some of them were just out of sight delicacies, especially the mangos, pomelos dragon fruit and others.  Sometimes we'd buy the fresh fruits, sometimes the dried ones.  We've always loved Thai restaurants, and indeed you can get some of the things you typically see in Thai restaurants in America, but you will also see things you never see in these restaurants in the States.  Jeremy eats mostly what he calls "street food," from vendors who have small stands with woks, griddles or steamers.  We were somewhat apprehensive about this, with our concerns over getting sick, but, as he said, he feels much safer when he can watch the food being cooked right before he eats it.  And, indeed, there was only one time in the whole 3 weeks we were there where we got sick, and it really wasn't too bad, just a queasy stomach for a few hours, but nothing to cause us to have to alter our plans.  This was when we were at the beach, and we all ate pad thai, and all of us, even Nok, who's a native.  We concluded that they had made up a whole batch of it and just left it sitting for several hours, so after that we always made sure we ordered food that we knew was not prepared before hand.

From our hotel window we could see across the river to several of the biggest temples in Bangkok, in particular the ceremonial palace and temple, Wat Phra Kaew.  While the king no longer lives there, it is still the site of many formal functions, as well as the famous 60 ft. long gold reclining Buddha, the world's largest reclining Buddha.  This is clearly one of the biggest tourist attractions in the city so the crowds were pretty intense, but we really enjoyed it in spite of all the pushing and shoving.

Sorry for the rather out of order posting, but since it's been several months, my memory jumps around a bit.  The day Jeremy, Trisha and I went to see the floating market, Nok had to work so it was just the three of us.  After we left the floating market, we went to see the Kwae, famous for the Bridge built by forced POW labor in WWII.  Somehow the name got changed to Kwai when they made the famous movie--the Thai people think this is hilarious, since kwai is their word for buffalo, but in the vernacular this is what you call someone you want to insult!  The bridge was built for the Japanese to bring supplies down from Burma.  There is a cemetery nearby, where the graves of the POW's are laid out by country--lots of British, Australian and Dutch.  It's about the most neatly maintained cemetery I've ever seen, with the grass looking like it was trimmed with scissors.  Pretty devastating to see all these grave markers, and to view the museum, where they had some pictures and then mockups of the prisoners as they worked--all of them were so emaciated it was hard to imagine how they could do any physical labor.  Sites like this are always a sobering reminder of the horrors of war, and what we humans are capable of inflicting on each other.  The bridge itself is not as long as I had pictured it in my mind, of course this image was formed by seeing the movie.  As we walked across the bridge, there was an elderly Thai man playing the fiddle; as we drew close, he began playing the song from the movie, but as we were walking back along the bridge, he broke out into a lively rendition of "We Will Rock You!"

Well, something apparently happened to the storage card that I had in my camera when we first got to Bangkok, since I don't have many of the pictures I took before I got a new card.  So, here are just a few shots in Bangkok, before we headed to the beaches at Krabi. 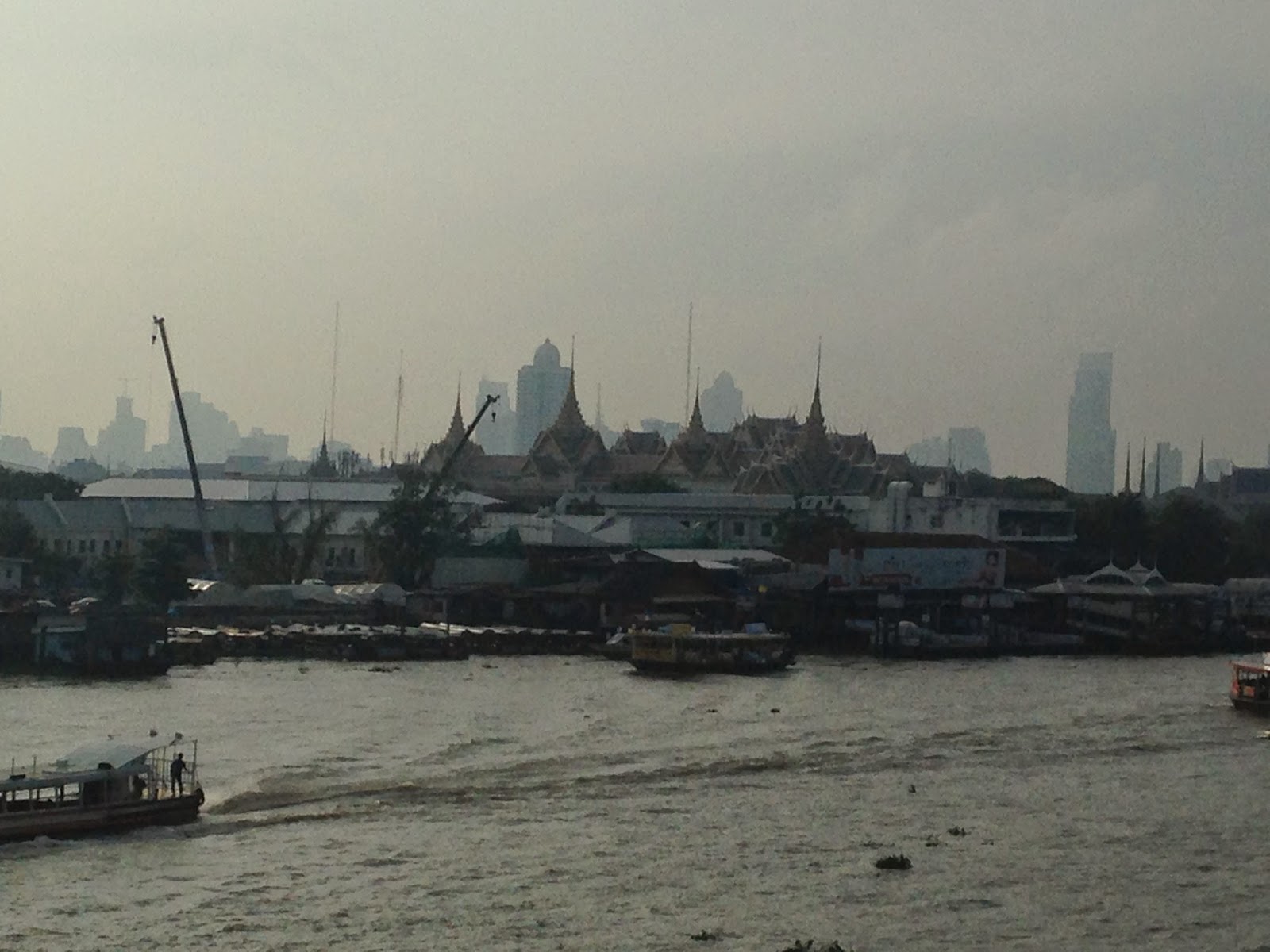 The big spire is from Wat Phra Kaew 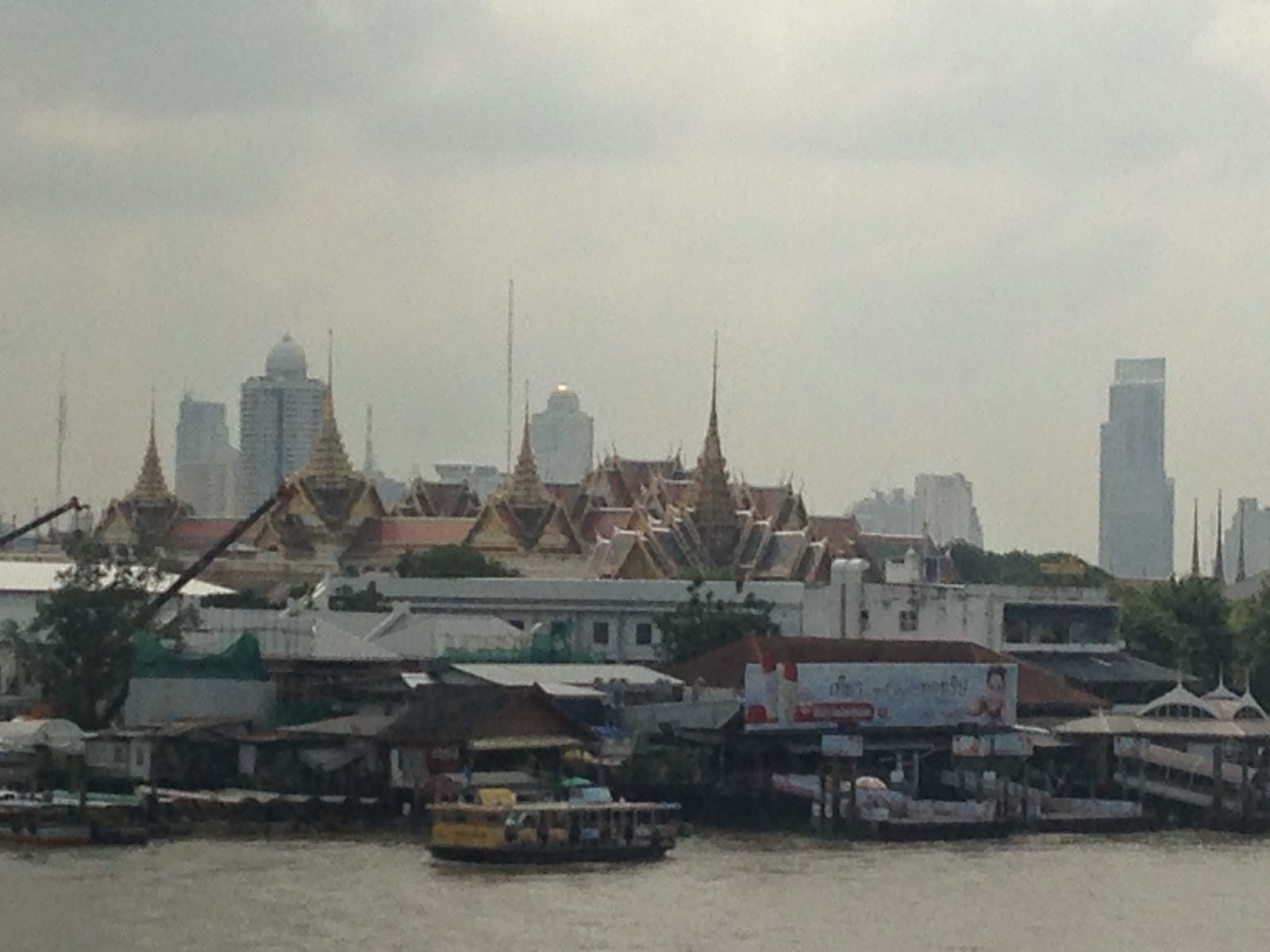 Water taxis scurrying along the river 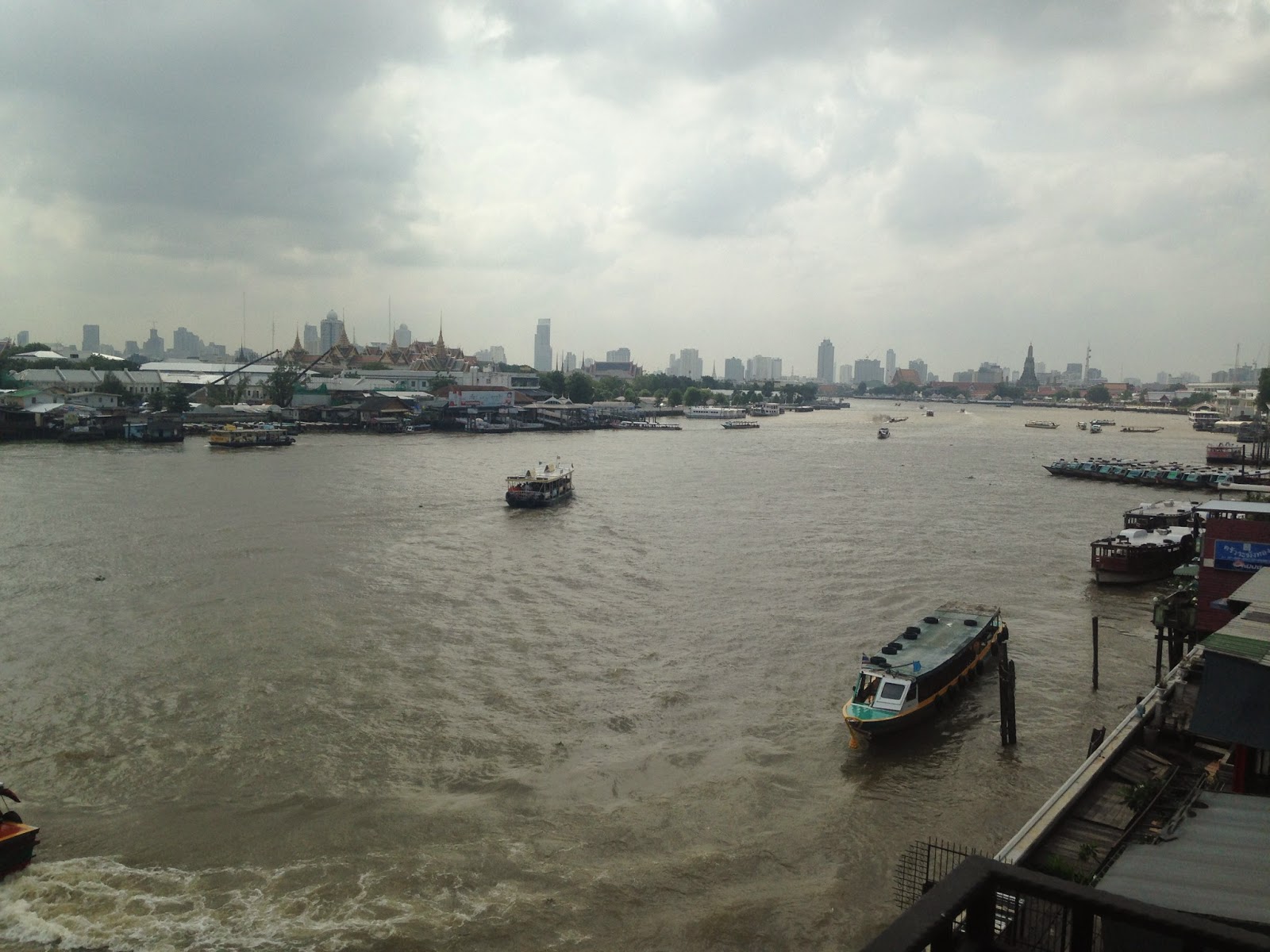 One of the main streets for tourist hangouts in Bangkok--Jeremy stayed in a hostel here when he first traveled to Thailand in 2013. 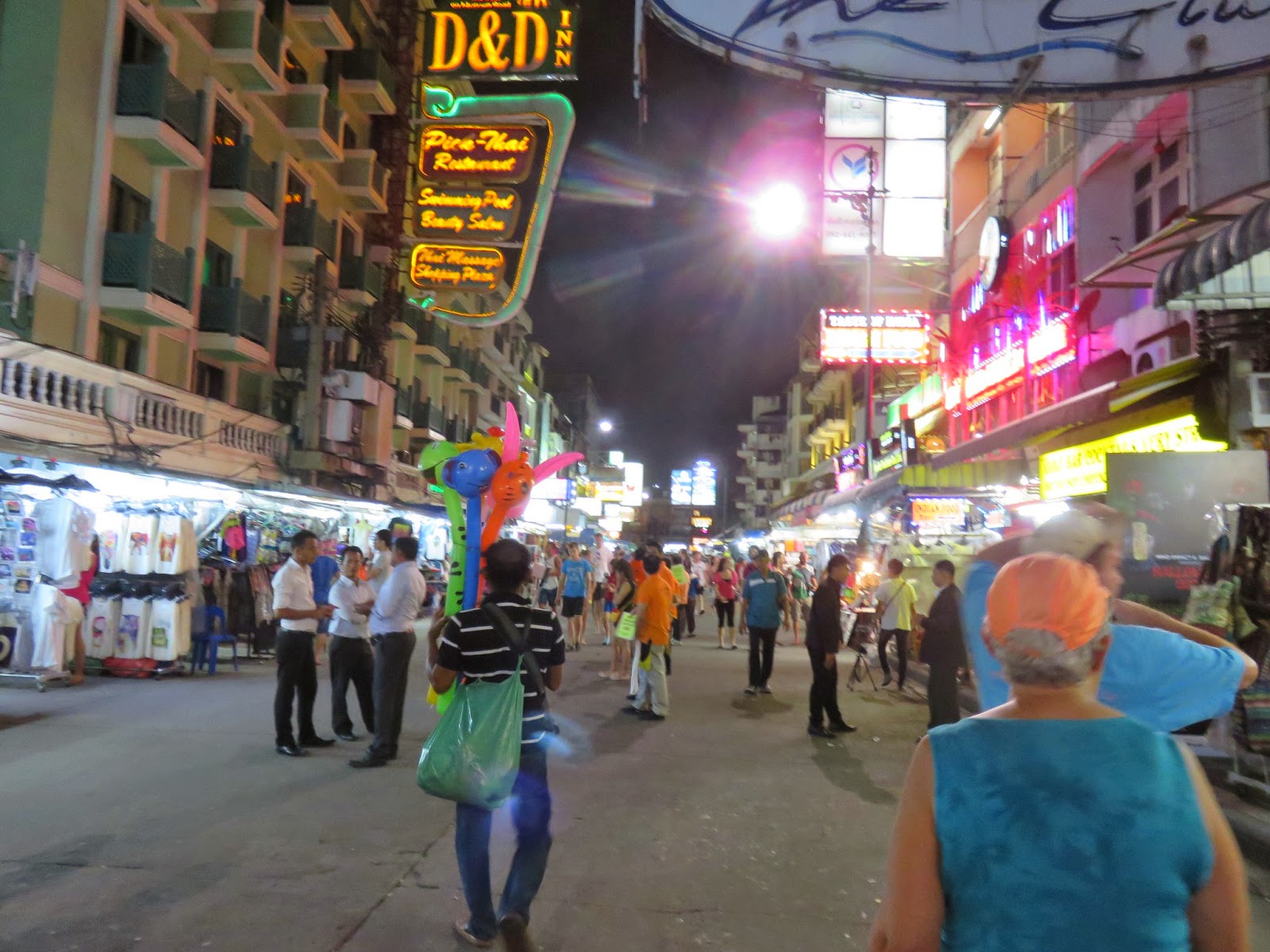 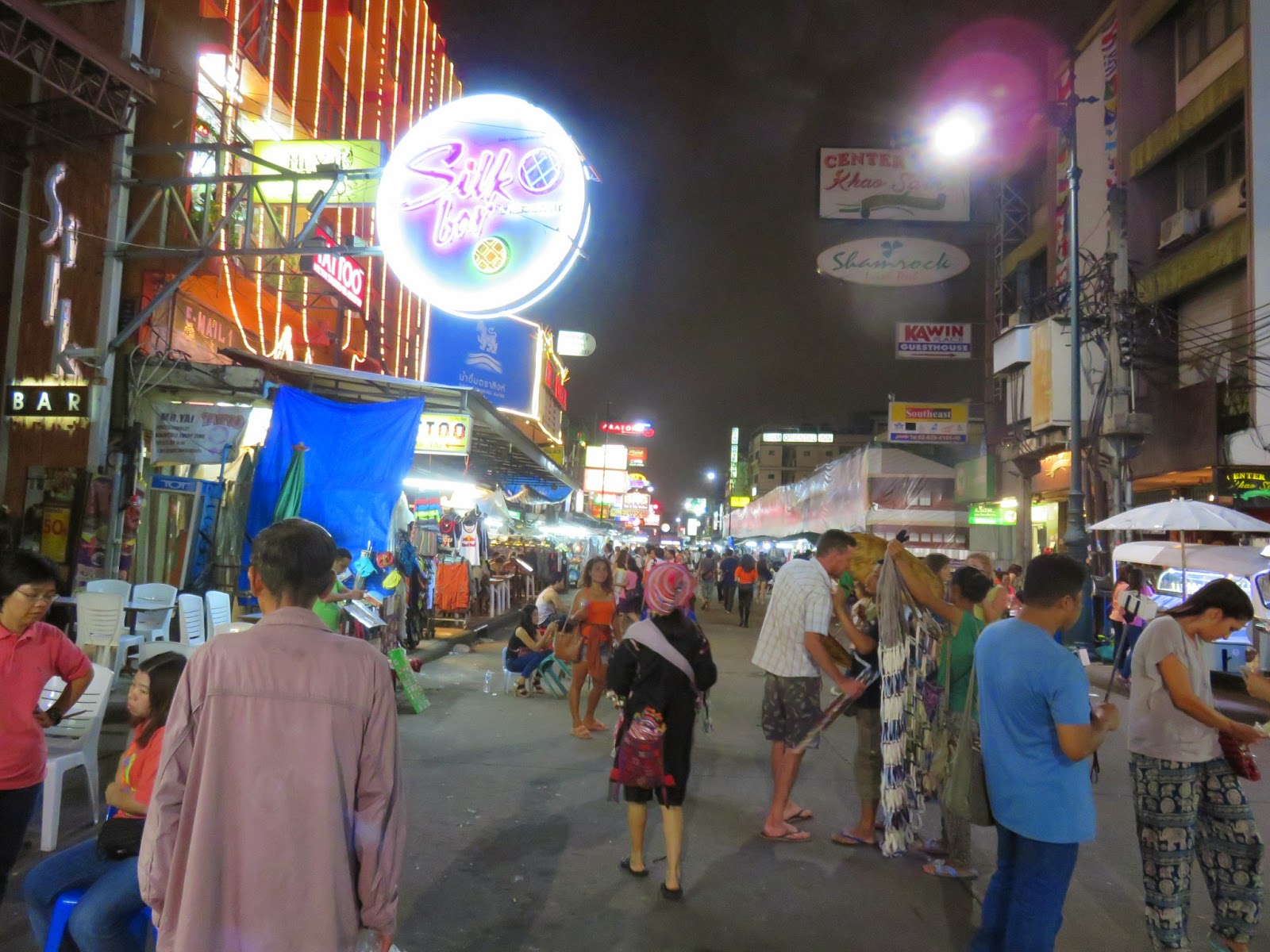 Bangkok street food vendor--watch out for this pile of noodles, not sure how long it's been sitting out!! 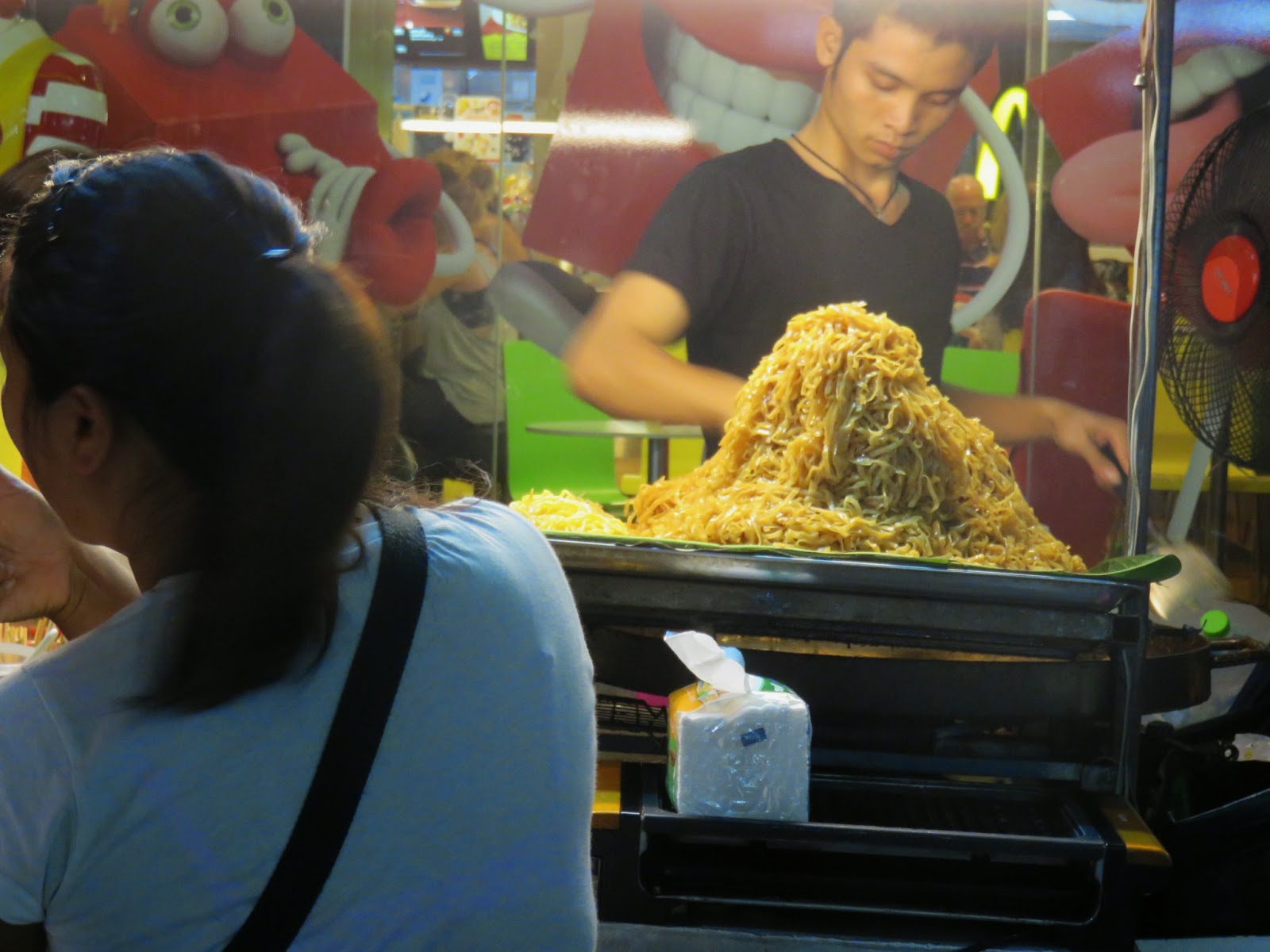 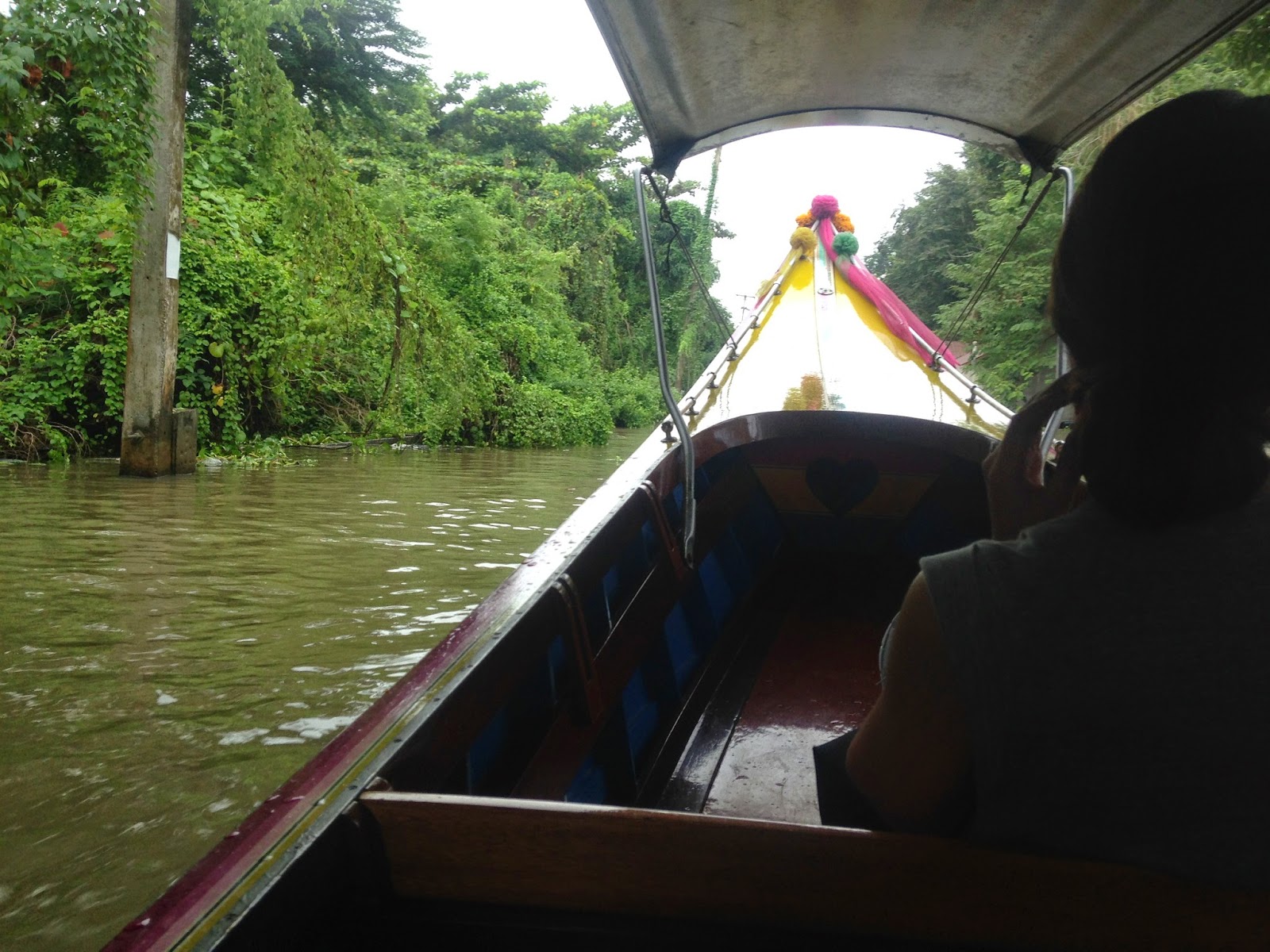 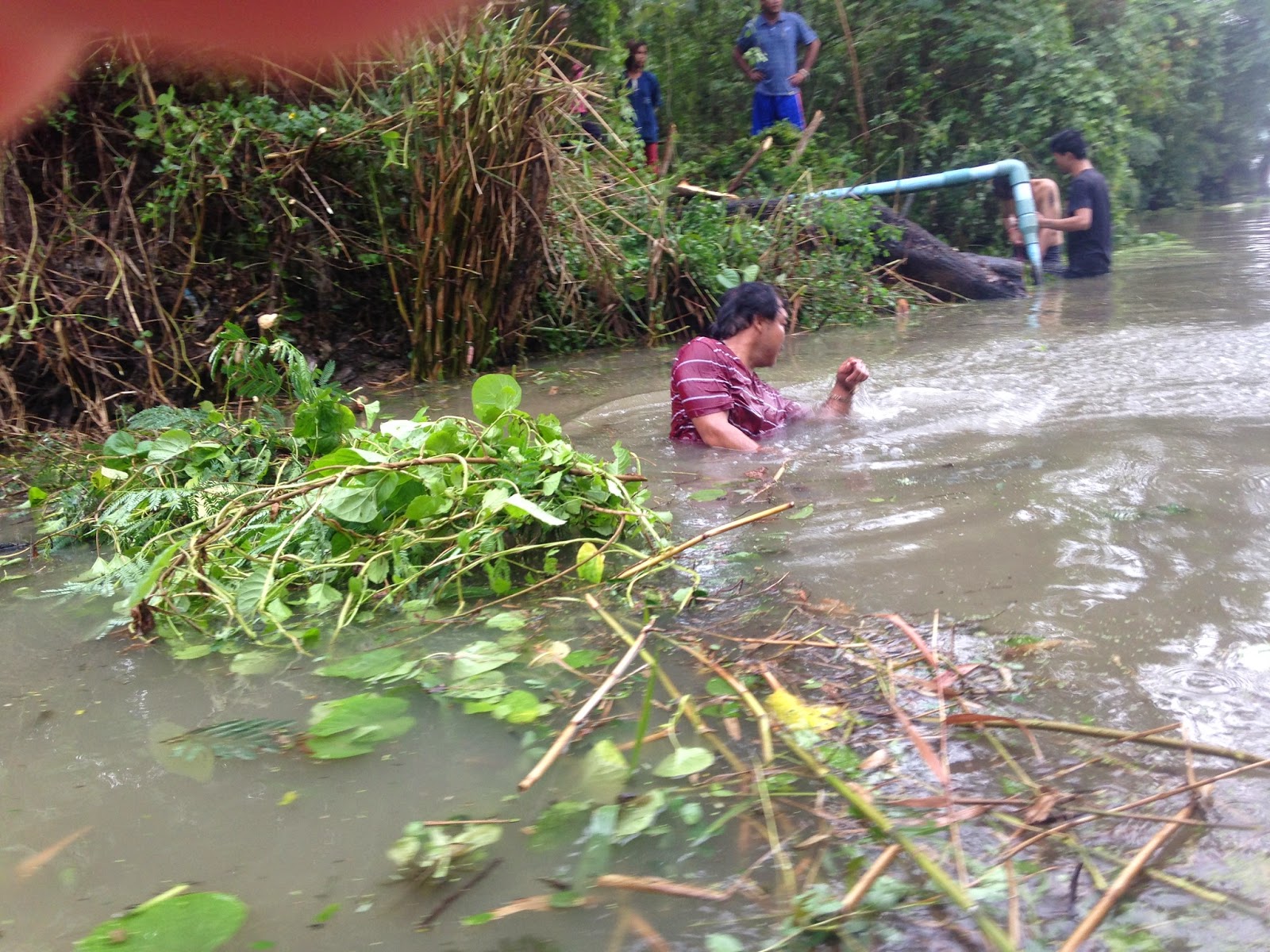 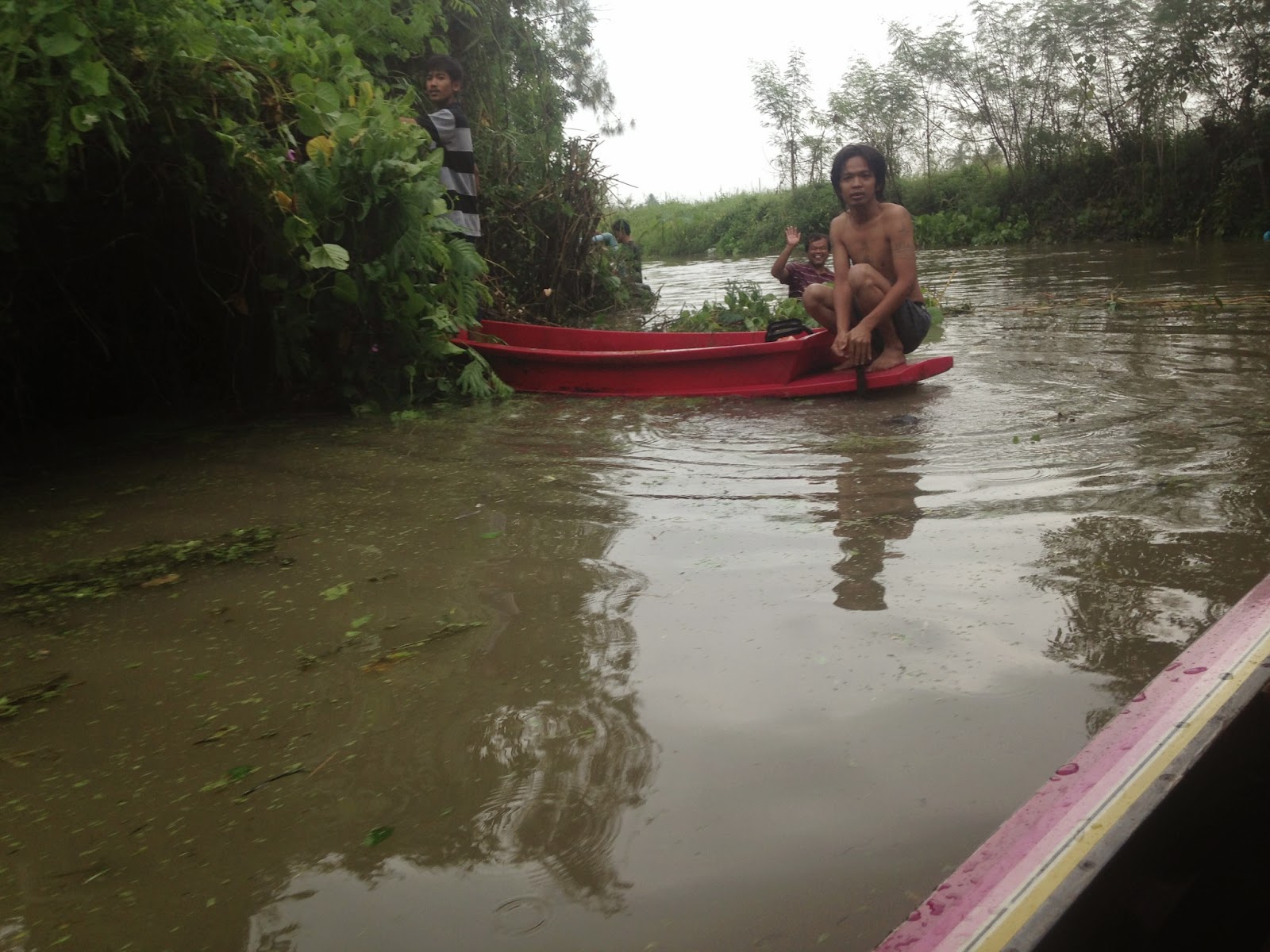 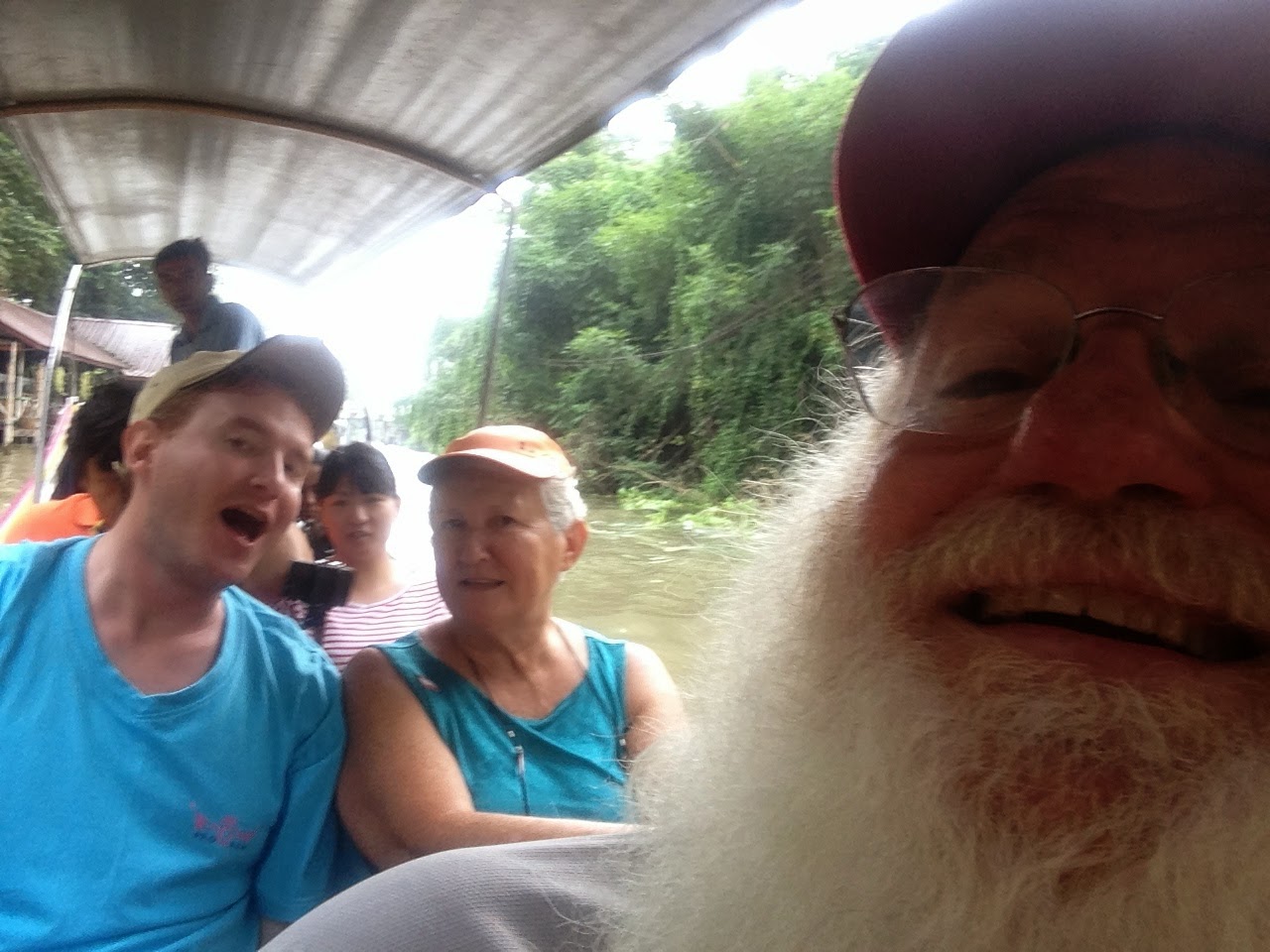 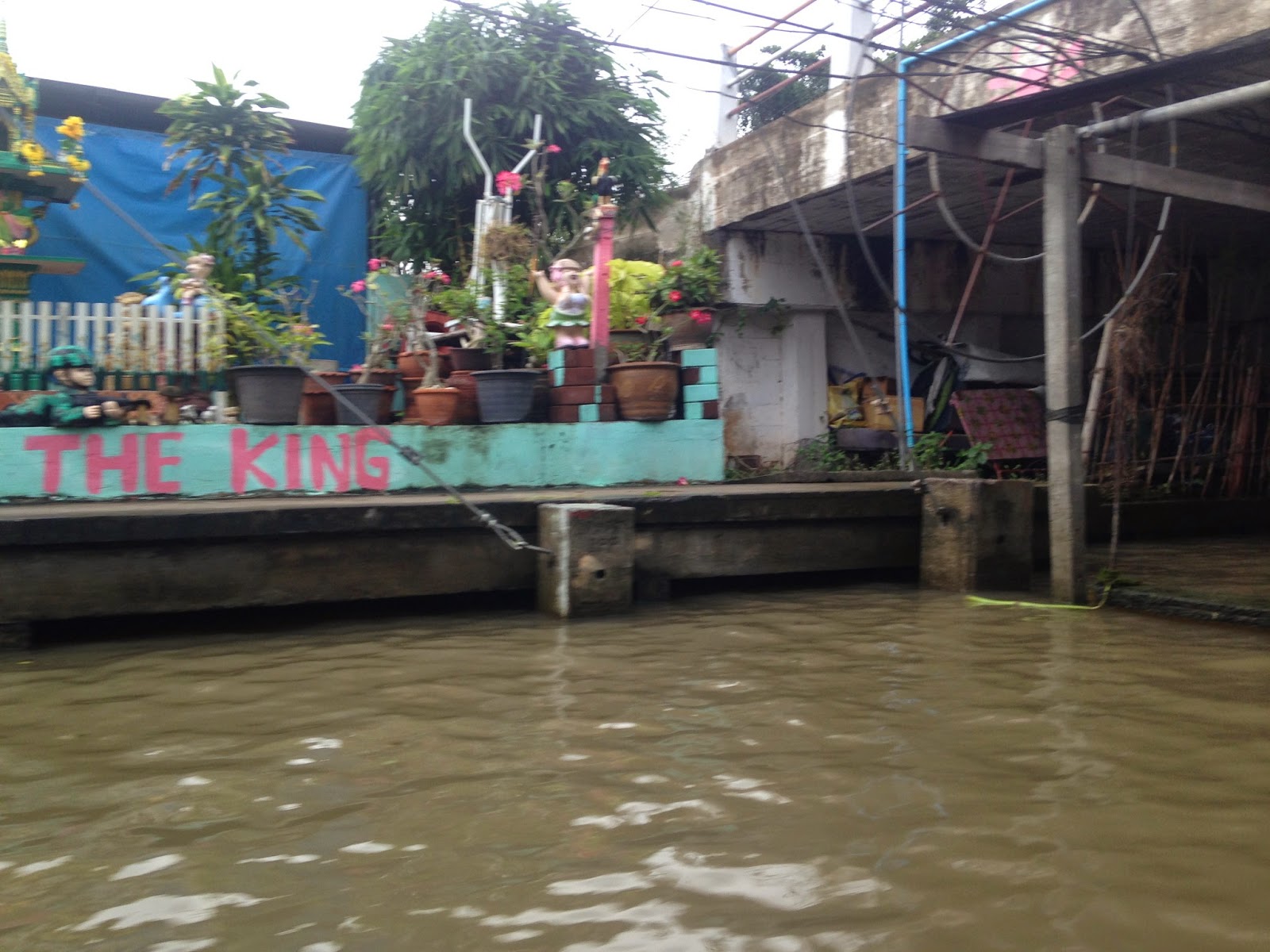 Bridge Over the River Kwae 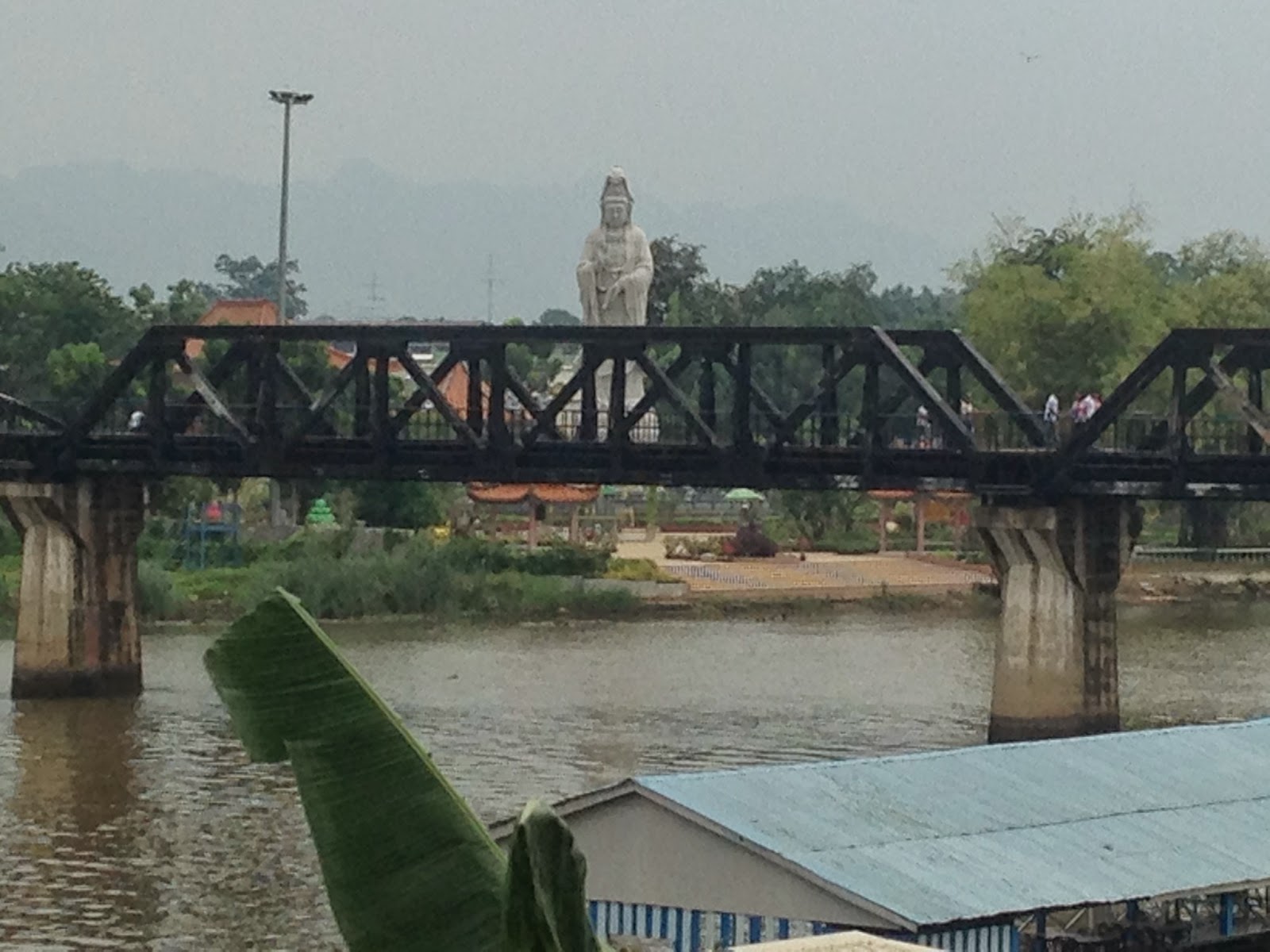 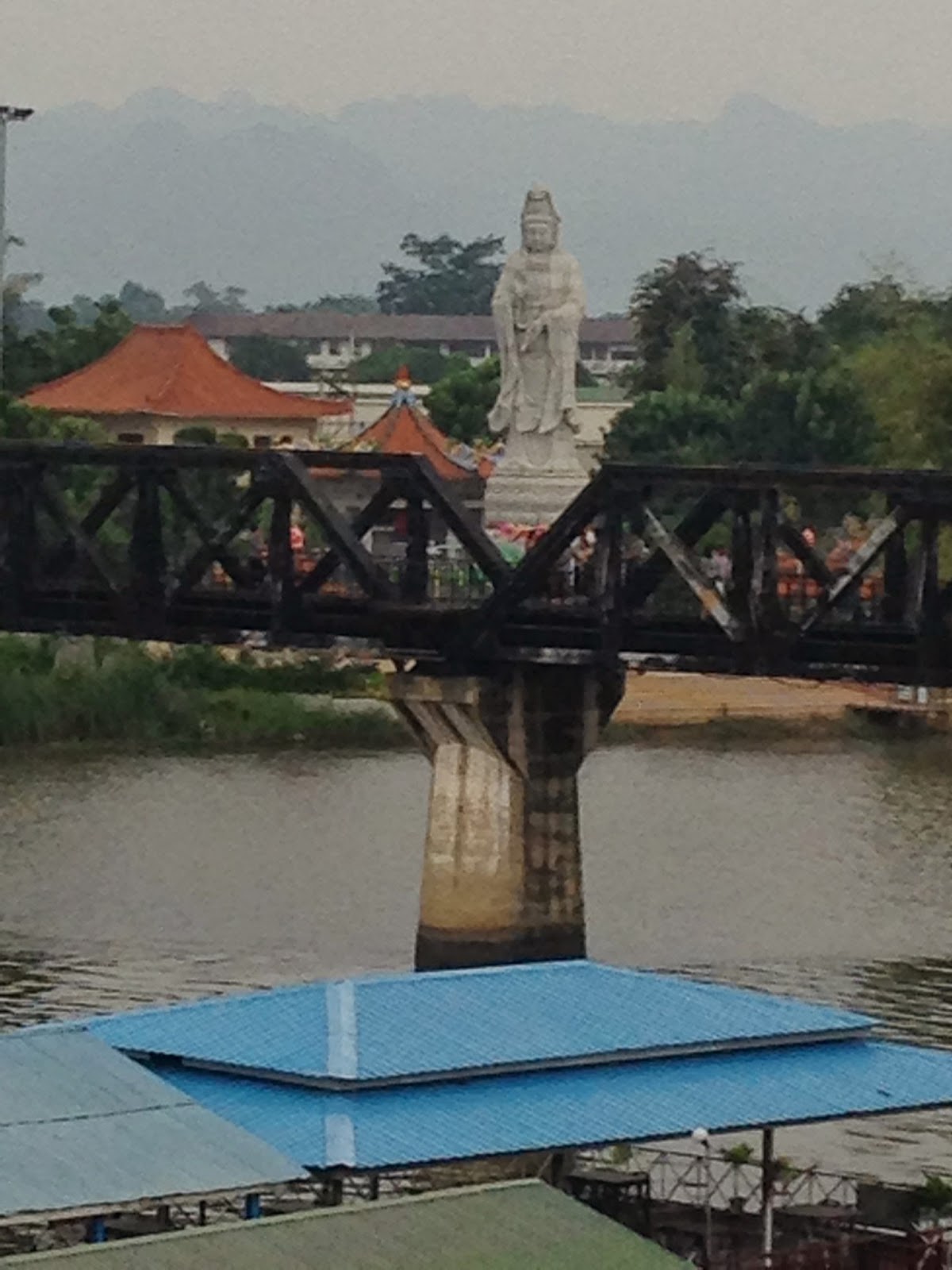 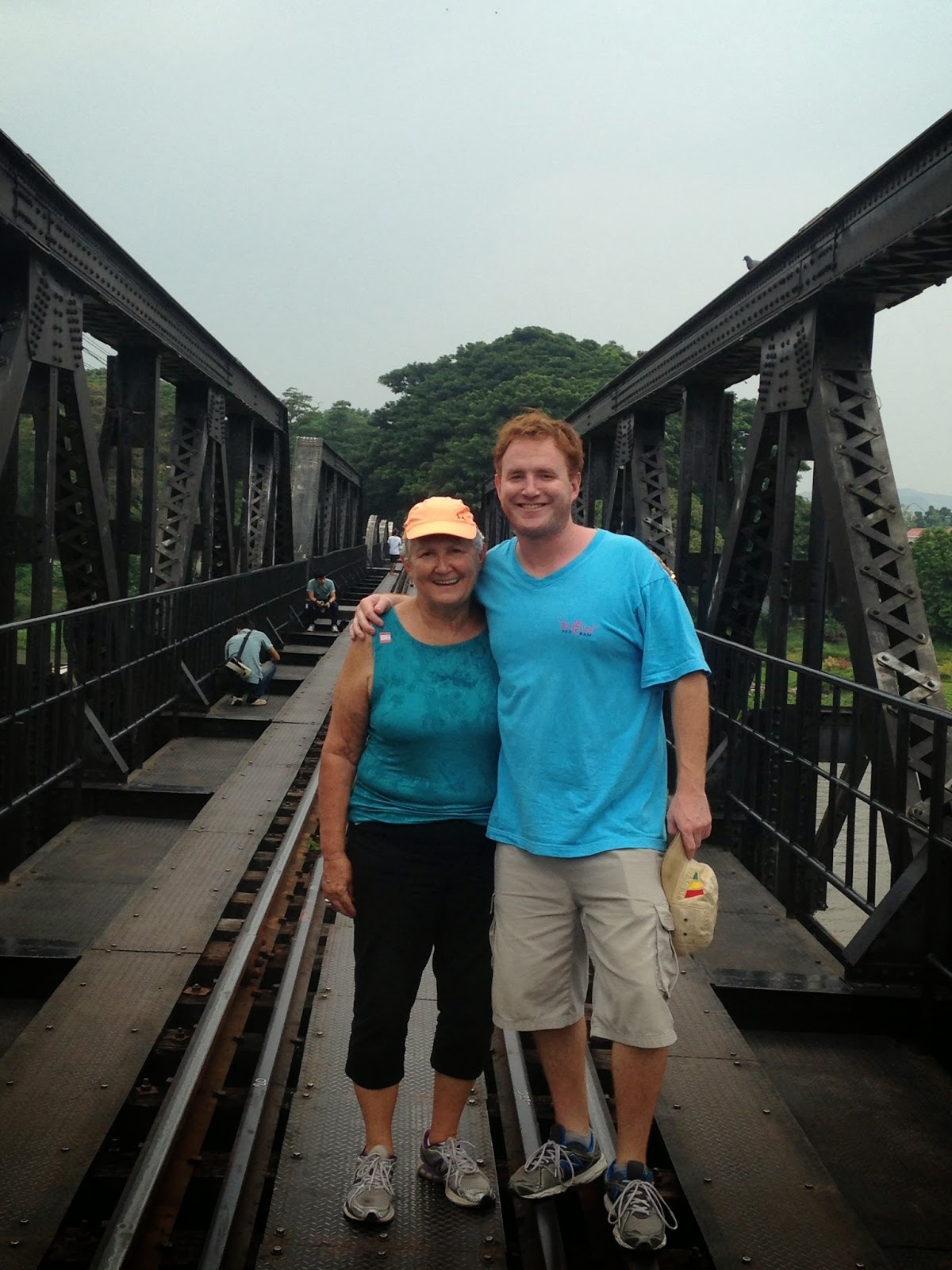