So wonderful to fall asleep last night with the windows open and this wonderful cool mountain air breezing in, and to wake up to another bright sunshiny day!  Today we were so excited to get back on the wonderful bike paths this park has, and we rode almost 30 miles, from Gros Ventre to South Jenny Lake.  We absolutely love this path--all paved, totally separated from the vehicular roadway, and, of course, the Tetons all along the way.  We saw some beautiful wild flowers amidst the sage, saw a herd of pronghorn, and near the end of our ride we spotted a buck mule deer.  He was just chowing down on all the lush vegetation that's here--since they have had so much rain everything is really green and vibrant, so all the wildlife are just loving it!  We stopped to watch him for a while, and he was doing the same--after a few minutes of staring us down from a distance, I guess he decided we were harmless, if not a little funny looking to him, us in our bright colors and all.  When we got back to the campground we stopped in at the office to show our pictures of him to the work camper and he said it was unusual to see a buck like this with spots on his back--cool!

We stopped at Jenny Lake and had a Clif Bar--and Trisha noticed that the picture on the package looks a lot like the "tres tetonia" here in the park.  When we first visited here we learned from a park ranger that some French Canadians in an early expedition, perhaps along with some Iroquois guides in the expedition, thought that these three peaks resembled female breasts, hence the tres tetonia, in French.  Some historians, however, dispute this notion and claim that the mountains got their name when the highest peak was named Grand Teton in honor of the Teton Sioux.  Anyway, it was interesting when we looked at the Clif Bar wrapper and saw three peaks!  It's always such a treat to be in the western national parks, as we see people from all over the world and hear lots of different languages, as people are here exploring all this wonderful country has to offer.

On the way back a man was passing us and he had on a Florida Gator shirt, so I called out "Chomp, chomp,"  and then "Hunker down you hairy Dawgs!"  He got a kick out of that, so he slowed down to chat, and we rode together for a while.  Turns out he's from Blacksburg, VA, and has a son who went to Florida, but a daughter who's entering UGA this fall.  He's a big biker and told us about riding from the west coast to the east coast a few years ago--what a trip that was!!  As we exchanged stories and he realized we were spending most of the year traveling in our RV, he was fascinated.  He said he's about 2 years away from retirement, so he was peppering us with questions about the RV lifestyle and was so interested in how we came to do this.  He's spending a couple weeks between this park and Yellowstone, mostly biking, but who knows, maybe we'll run into him in an RV in a few years, somewhere down the road!

While we were stopped at Jenny Lake, the wind had picked up, and we had a pretty stiff headwind on the return trip.  But I was so proud of Trisha for doing this distance, as it's been quite a while since she's ridden this far.  When we were in Sarasota, I rode quite a bit, sometimes doing some long rides of 40 and 50 miles.  She didn't ride so much there, but was faithful with her water aerobics, and she said she could really tell the difference that made when she got out on the bike path today.  All in all it was another glorious day, to be riding in our favorite park, amidst all this spectacular scenery--we are just so blessed and fortunate to be able to do this.

Here we are, just getting started--isn't this bike path just super?? 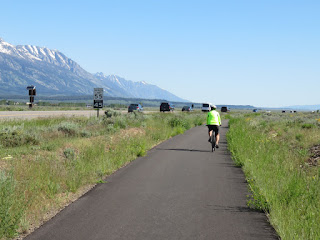 Even though we're right beside the road, with this path you don't have to worry about riding on the road where there's always the possibility that someone will be texting or be distracted, and can run that flying hunk of steel right into you--believe me, I know from personal experience.  So we just love riding here.

I love the fences they have along the way bordering some of the ranches that still are here in the park.

There are the tres tetonias, right over my head!

Heading over the bridge just past Moose Junction

With all the rain and faster than normal snowpack melt, the Snake River is really moving fast--this would be a spectacular time to do a raft trip down the Snake!  We did it with Jeremy when we were here 22 years ago, and it was so much fun.

A small waterfall, bringing the melting snow down the mountain.

A couple came walking by and offered to take another picture, after we did the selfie!

Let me take a closer look

That lady in the bright yellow shirt and the dude with the long white beard are pretty funny looking, but I'm hungry!

Oh well, I'll let those silly humans have their two wheeled contraptions; I'm quite content to munch on all this delicious greenery!