Okay, I was able to get an appointment for the Genius Bar at the Apple store in Seattle and the guy I worked with proved true to his name--he fixed the problem with the Photos app, so I'm now able to import pics from the camera.  So, here are some pics that go along with my previous post about leaving Grand Teton National Park:

A few shots of the gorgeous Tetons as we drive back through, on our way out. 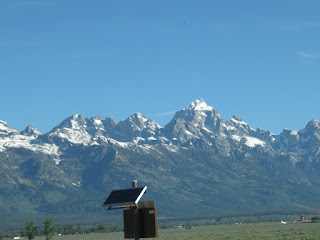 Here's the grizzly bear, feasting on a deer.  Don't know if the bear actually killed it, or if perhaps the deer may have been struck on the road by a vehicle and just limped into the woods and the bear caught up with it.

We stopped at a pullout shortly after seeing the bear--when Sophie started going nuts, whimpering and barking, apparently due to the unusual-to-her scent of the bear; as we walked her around, we found this footprint in the dirt

Some of the wildflowers by the pullout

Santa in profile, set against the Tetons

In some of these next shots, you  can see both some of the remnants of the big fire from 1988, as well as the new growth since the fire

Approaching some of the geysers

It's amazing how the geological landscape here is so different from Grand Teton, when they are so close.

Fortunately, we were leaving Yellowstone--this is the traffic backed up waiting to enter the Park from the west side!

When we looked at this rock formation, we could almost see human faces in the rock--sort like a mini Mt. Rushmore!

Sunrise from our campsite in Butte, just loved the way the sunlight played across the hills in the distance

Every morning Trisha takes some time to write in her journal, but here Sophie decided she wanted some attention, so she just sat right down on her journal!!