Monday we drove from Butte to Coeur d'Alene, Idaho, a place we've never been before, but whose name has always held a fascination for me for some reason.  Anyway, we found a lovely little campground right along the highway.  When Trisha called they said they had one spot left, so we were really glad we found it!  We drove the tow car to the local grocery store, and when we got back, a very nice couple in the site behind us came over to ask about the Alaska sign on the car.  They asked if we were by chance going on a caravan trip, and what do you know, turns out we're all on the same trip!!  They are such nice folks, and we ended up spending a very pleasant evening just sitting outside talking about the upcoming trip.  They have a very old black lab who's really struggling with her hips.  Sophie, of course, was glad to meet a new friend and had a bit of a hard time understanding why Star wasn't jumping and running like she thinks dogs are supposed to do.  They had learned from the trip leader that there are over 20 dogs going on the trip, so Sophie is bound to have lots of new friends!  These folks are from Missouri, and it turns out she is a retired ESL teacher, so she was excited to learn what Jeremy has chosen for his career path.  And one of the languages she worked with is Spanish, so I'm hoping she'll be willing to let me practice with her while we're on the trip.

We had initially planned to arrive in Seattle on Wednesday, but since we were making better time than we had thought, we decided we could make it in by Tuesday afternoon so we booked it on down the road toward Seattle.  As we crossed the border into Washington--our 11th state so far--we began to see these ginormous hay fields and super humongous hay storage complexes.  Some had warehouse-type buildings, open at the end so we could see all the bales stacked up, but others just had massive stacks, covered with plastic.  I suppose they ultimately ship this to areas where they don't grow it, but it is obviously a big operation in the eastern part of the state, very interesting.  (Todd just told us they ship this hay overseas.)

Fortunately there is an RV park quite close to our son's house in Seattle, so we left the RV hooked up to shore power there while we stayed at their house.  We were so excited to see them, since Christmas was the last time we'd been together! We went out to eat at our favorite Mexican restaurant, Taco Time, near their house and had fun catching up.  Wednesday, after John went for his next to the last day of school and Todd and Karen were at work, Trisha and I took Sophie for a nice long walk through the many greenways that run through their neighborhood to a wonderful park nearby.  Some ducks on the pond swam over to us, hoping we might have some bread to throw out, but alas, they were disappointed!  Sophie looked like she might have just jumped into the pond to go after them had we not had a firm hold on her leash!  That afternoon after John got home from school we took him out for frozen yogurt--after all, what are grandparents for but special treats, right?--and then took the whole family out for supper later.

Todd and Karen live in a community south of the airport, but since they both work in downtown Seattle, they have to leave pretty early, and John ordinarily goes to a before school program.  Since Thursday was his last day of school, and since his school is just a couple blocks away, he was excited for Pop and Yaya--that's us--to walk with him to school, plus he was proud to have Sophie on her leash as he could strut in front of his buds!  He only had a half day of school, so of course we went for another frozen yogurt outing to celebrate the start of summer vacation!!  When Todd and Karen got home from work, they fixed a wonderful homemade pasta dinner.  They are into making everything fresh and from scratch, so Todd baked bread and then made the pasta while Karen made the sauce, and it was outstanding!  Can't believe that after a full day of working, they come home and Todd goes right to work with the bread and the pasta maker--very impressive!  Trisha contributed a wonderful salad, topped off with some of Todd's homemade sherbet for dessert--what a feast.

Though Karen still had to work on Friday, Todd took the day off--well, sorta, kinda.  Even though he was off, his phone and email were pretty active all day, and since he's a team leader at his office, he had several problems to solve for co-workers and clients; I so remember those days, when you have to interrupt vacations or time off for work.  So glad those days are in my rear view mirror--people often ask me if I miss practicing law, and it's reminders like watching Todd,  to confirm that retiring when I did was absolutely the right thing for me!  But, there's also a big element of pride to watch your adult child taking charge, solving problems, calming co-workers and reassuring clients--just makes a parent happy to see that cute, playful little boy all grown up and doing well!  Anyway, every time we come to visit, we look forward to our ritual visit to Pike Place Market downtown!  We love going down there, to see the spectacle, of course the guys throwing fish at the big fish place at the main entrance, the glorious fresh flowers for sale at ridiculously cheap prices, the tie dyed t-shirt place, the other exquisite crafts, and of course, the fresh fruit and veggie stands.  Karen and one of her co-workers met us for lunch at Jack's Seafood Spot, a tiny, crowded, bustling place along the cobblestone street running along the front of the main market.  We usually go here when we come to Pike Place and it's always fun.  Lisa, Karen's co-worker, makes lovely jewelry and Karen has given Trisha several pieces of her work for Christmas through the years, so I think some orders may have been placed down the counter from my seat while we were eating!!  Trisha found some knitting needles of a particular size she needed at the wonderful shop she likes to visit when we come--So Much Yarn, for those knitters out there who may happen to be here.  It's a great store, the place where Trisha found the pattern for the wonderful knitted necklaces she's made, and the people are all so nice and helpful.  And, of course, one of the staff just had to spend some time pouring out her heart to Trisha about events in her life--the "come to me with your story" on Trisha's forehead is still working!!  Got some delicious fresh figs from one of the stands on the way back to the car--John gave them a taste, but was not quite as enamored with them as I am!  John also was able to pick out a tie dyed t-shirt for Todd for Fathers Day, and Karen helped keep the surprise from Todd while we were in another part of the market, so he was really pleased with his find!

Got back home and Todd once again made some fabulous bread and more homemade pasta, while Karen made up a big batch of her scrumptious granola for us to take with us on our trip to Alaska.  She's such a great cook, and all it took was our complimenting her on the bowl we had for breakfast and off she went to the cupboard, gathering up ingredients and making us some to take.  I've already placed my order for Christmas!!  John has loved making smoothies for us for some breakfasts and lunches, though he still watches me like a hawk to make sure I don't put any kale or spinach into his!

They have two little dogs, Sammy, a female rat terrier, and Joey, a male "chihuachshund" a chihuahua and dachshund mix, and Sophie has been in doggie heaven having two playmates.  Sammy is a bit aloof, but she has found a true friend with Joey.  They sometimes just speed around the house, chasing each other until they plop down in exhaustion, sometimes rough house with each other, but they're having tons of fun.  She'll sure miss them when we leave; fortunately there will be lots of dogs with the caravan so she'll have some new friends then as well.

Today, Saturday, we're going to meet Karen's mom for lunch, along with her sister and her boyfriend, so it will be good to see them.  And tomorrow we'll enjoy a Fathers Day brunch before we head to Anacortes to meet up with the caravan, but in the meantime, here are some pics:

Leaving the campground in Butte 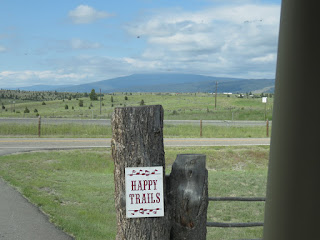 On the way to Idaho

We encountered several cleanup and repair operations from rockslides along the way, like this one

The campground in Coeur d'Alene

Some of the massive stacks of hay bales

Karen went to Central Michigan University for her undergraduate degree, located in Ellensburg

Some hay bales on the way to one of the big storage facilities, with the windmill farm in the background

Trisha, working on a sweater--for herself this time, after making so many beautiful gifts for others!  Note the beautiful wooden knitting bowl on the dash--Todd turned this out of a black locust wood burl and it is just gorgeous!  When we were at the RV park in Sarasota, Trisha showed it to her knitting group and one woman who's husband is a woodturner got her husband to look at it so he could try to duplicate it--not a chance!!

Sophie with Sammy and Joey in the back yard

On our morning walk, when she thought about making a break for the ducks!

We loved John's hair long like this--it's such a beautiful color, just like Shelley's and Jeremy's--alas, he insisted on getting Todd to give him a buzz cut for the summer the next day 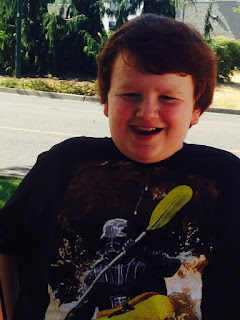 Sophie and Joey--hard to get a picture in focus s they were in constant motion! 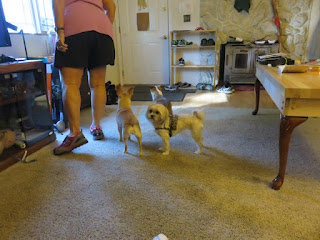 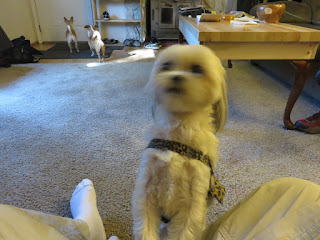 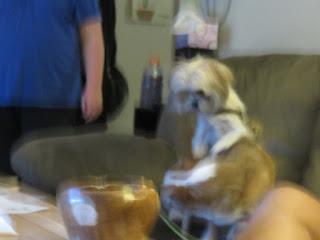 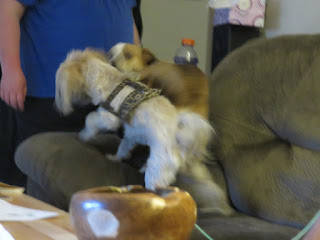 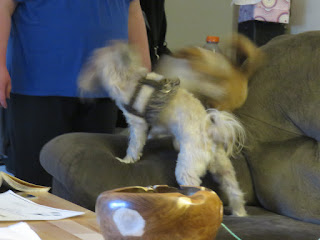 Trisha with the beautiful bowl 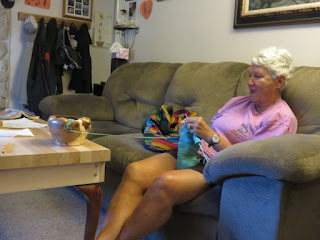 Here you can see it better--and note the whirling yarn flying out of the guide hole while Trisha converts it into a beautiful sweater! 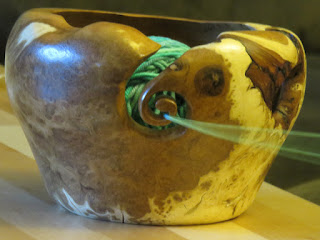 On the way to his last day of school 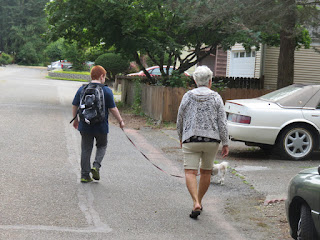 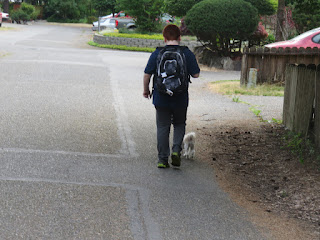 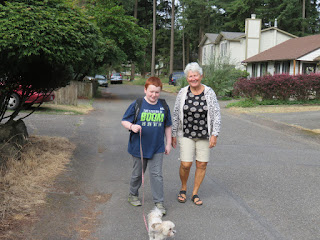 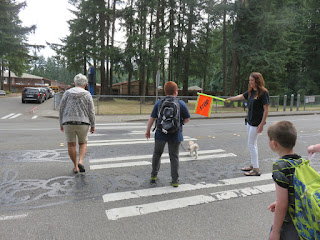 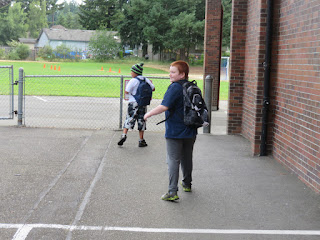 Next time I see you guys this afternoon I'll be a 6th grader!!! 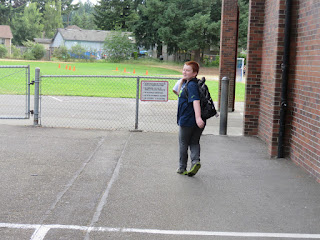 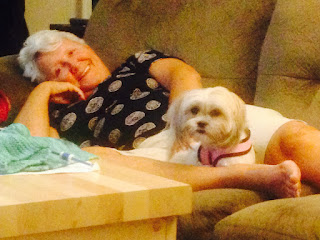 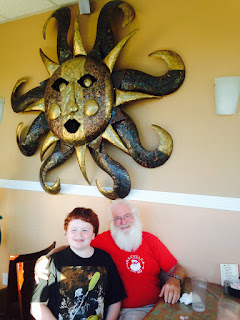 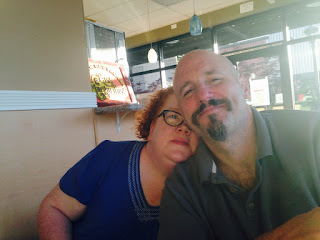 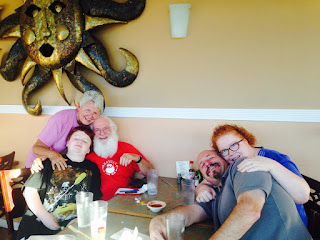 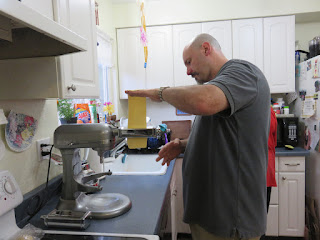 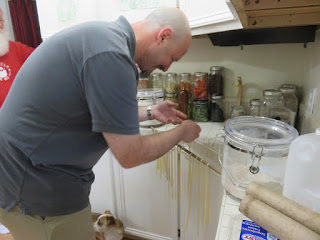 Karen's making her sauce while Santa licks his lips in anticipation!! 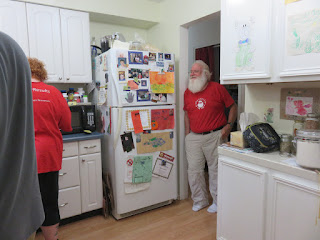 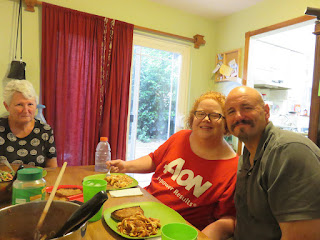 John after his buzz cut 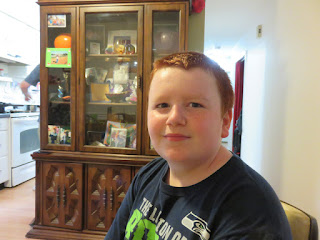 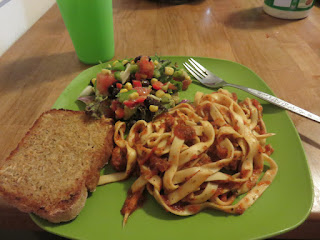