Wednesday we kept on trucking west through South Dakota.  One of South Dakota's claims to fame is that it's the home of Wall Drug, in the little town of Wall.  This place was started in 1931 by a young couple in search of a new life. The man had recently graduated from pharmacy school and he and his wife sought out a small town with a drug store for sale, landing them in Wall, with a thriving population of less than 350 people!  Business was bad, and the man told his wife they would give it 5 years and if it didn't turn around, they would look for somewhere else to live.  On a hot July day, just before the 5 years were up, still with virtually no customers, the druggist's wife, Dorothy, had an idea.  The store was on the town's main drag, which was also a through highway for travelers passing.  She realized that long hours driving through the hot prairie left these travelers hot and thirsty, so she decided to offer free ice water.  She came up with a jingle, her husband put the separate lines on signs and drove out along the highway, spacing the signs like the old Burma Shave ads, offering free ice water.  By the time he got back to the store, many people had stopped, and while drinking their free ice water, started buying other things.  By the next summer business was so good they had to hire 8 helpers, and now the store, managed by their son, has grown into many buildings, covering several blocks, and attracts over 20,000 visitors a day.  Still, the only advertising they do is highway billboards.  When we came through here on our first RV trip in 2013, we went into town to see the spectacle and it's quite something--obviously now much more than a drug store, where you can buy just about anything--and can still get your free ice water!  Since we had been before, we didn't go into town this trip, but it was still cool to see the signs!

Driving through the Black Hills and the Badlands was a challenge, as we encountered some strong cross winds,  but by the end of the day we were glad to get to Wyoming, the 9th state on this trip and one of our favorite states.  We had thought we would make it to Buffalo, Wyoming for the night, but as the afternoon wore on we started seeing weather alerts on the message boards along the highway, so Trisha got on the computer and looked at the National Weather Service site and we saw there were severe weather warnings for Buffalo, including flash floods and hail.  Not wishing to run the risk of getting caught in that, she looked at the weather reports for Gillette, which weren't nearly so severe so we decided to stop there  for the night.  Just as we were pulling off the highway to go to the campground we started seeing lightning in the distance and it was starting to rain--I just barely got everything hooked up at the site before the heavens opened up, so we were very glad we decided to stop when we did.  It rained hard for a couple of hours and then started letting up, and finally stopped in time enough for us to make a grocery store run before we turned in for the night.  After we hit the hay the rains started up again, and we heard it going on for most of the night--so glad to be tucked in safe and sound and dry, with no hail or flooding!

We've learned quite a bit during our RV travels, a lot about the unbelievable number of varied and interesting places in this vast and great country of ours, but also about ourselves and other people.  We typically don't make advance reservations for campgrounds, just wait until sometime in the afternoon and start thinking about stopping for the night.  We have an app on the ipad where you can search for RV campgrounds along the way, and also look up reviews of each campground by people who have stayed there.  Trisha found this campground on the app, it sounded basic, but just fine for us to have a place for the night.  When she started reading the reviews, there were a few that had some negative things to say, e.g., complaints that it was not fancy, not "really" an RV park, etc.  We've noticed in the past that some RVers seem to post reviews with complaints about campgrounds that are really just nitpicking, almost looking for something to complain about, and yet when we stayed there we thought it was fine.  Well, it turns out that it was a place where most of the sites are occupied on a permanent or semi-permanent basis, mainly by working folks, with lots of pickups outfitted with gear like welding rigs, etc., but the site was level, we could easily pull through, it had full hookups and was easy to access from the highway.  The main thing we like about this lifestyle is the chance to meet new people, and here we found good, solid friendly folks.  The man in the unit next to us came right over to offer help and give directions to the grocery store, etc. Anyone who knows Trisha knows there's not a soul on this earth she can't talk to and, in fact, more often than not, people come up to her to start talking, often as if she has a neon sign on her forehead that says, you can tell me your life story and I'll offer you some pastoral care!  So we never have trouble meeting folks, and there's always good people around, if you just keep yourself open.  And all that made this campground a fine place to stay!


Some of the South Dakota scenery along the way: 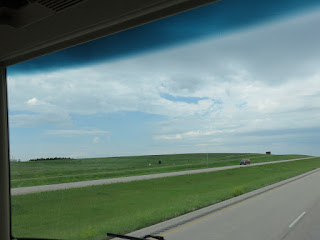 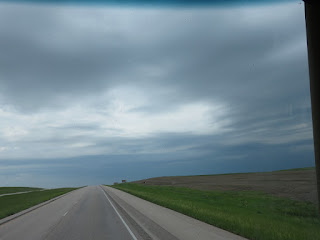 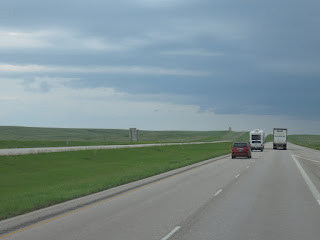 Out here you can see rain coming for miles! 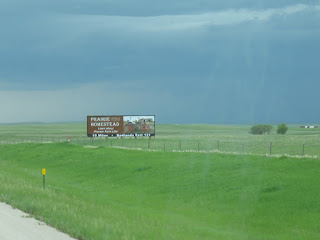 Here's one of the signs for Wall Drug 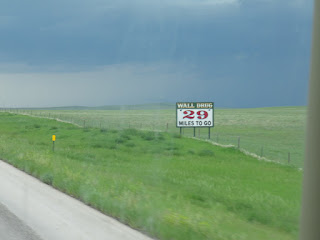 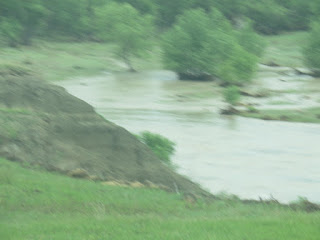 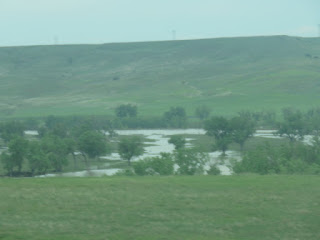 All the rest stops in South Dakota have these teepee-like structures, with big lights for nighttime, and some signboards about attractions nearby 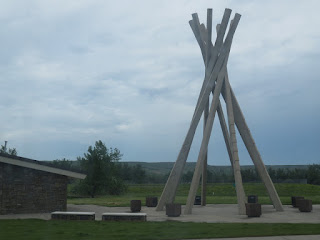 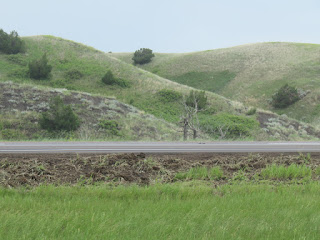 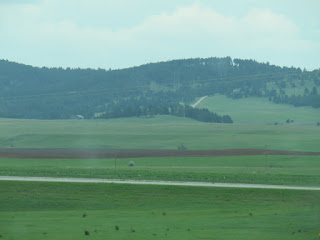 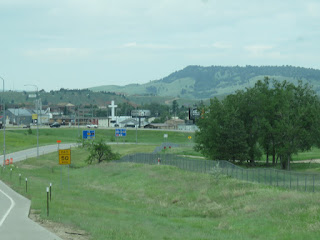 Came right through Sturgis, mecca for all the motorcyclists out there! 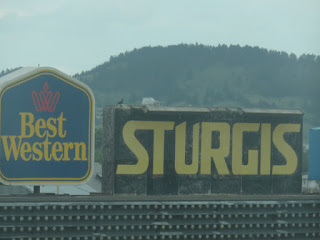 Getting close to Wyoming . . . 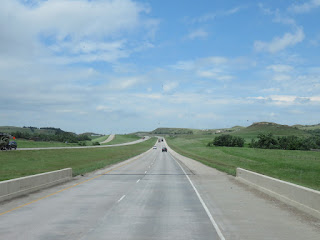 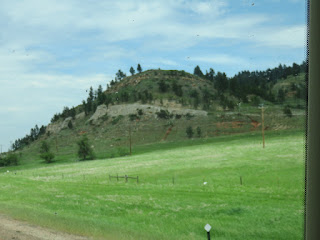 and here we are!! 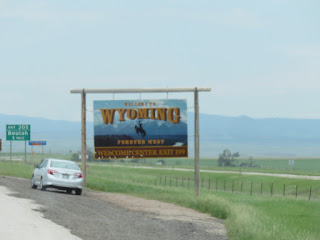 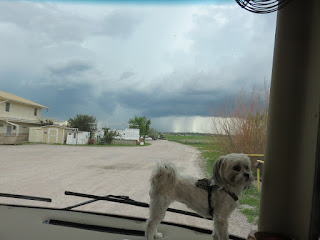 Sophie stays in a carrier at Trisha's feet while we're driving, as there's a little window at that level where she can look out at the passing scenery.  When we stop, however, she's very ready to get out of her carrier, so here she is, on the big dashboard, examining the view from the parking lot of the campground while I'm inside checking us in!
Posted by Unknown at 7:52 AM