Monday morning took another bike ride to North Pole, and this time Trisha joined me.  It was a fairly cloudy morning, but it was a wonderful ride!

Later that morning we headed downtown, as we'd heard there was a farmer's market in the park next to the Yukon Quest Headquarters.  Well, when we got there we found only one vendor, and it was someone selling crafts, and no produce vendors were set up.  Disappointed about that, but we went to the Cultural Center where we watched a video of a man who had built his own cabin and lived off the grid in the Yukon for fifty years--pretty remarkable to hear all the details of such a challenging existence.  They also had lots of exhibits about the Athabaskan people, including a program of song and dance.  We learned about the many different tribes of Athabaskan people, each living in different parts of the Alaskan interior, each with their own related but distinct language and customs. This was done primarily by students, but there were also a couple of tribal elders who participated, playing the guitar, harmonica and fiddle.  They talked about their traditional music, the instruments that different tribes throughout the Alaskan interior used, what materials they used to make them, and how they played drums differently, depending on the tribe, and explained many of the movements in the dances.  Most of these dances told stories, of hunting, of the land, of the many mysteries of life--very interesting.  When the two elders came out, they talked about how their traditional music has been influenced by American music, particularly country music, and many of the fiddle tunes showed a heavy Cajun influence.  On a couple of the dances they described as broom dances, some of the young people came out into the audience and got some of us to come up on stage to participate.  The way this works is that one person holds a broom, walking around the dance floor sweeping.  Then, on that person's initiative, he or she slaps the broom down on the floor and everyone changes partners.  You guessed it, Santa was one of the chosen, so I got up on the stage to dance--the bad news is that I had the camera in my pocket and didn't give it to Trisha so she could take pictures; the good news is that I didn't step on any of my partners' toes or knock them off the stage!  The dances were sort of a combination of a waltz and two step, but simple enough even for this old geezer to do!  A lot of fun!!

That afternoon the caravan staff put on a margarita party for everyone, and we all contributed some appetizers.  It was a fun time, and they do a good job of planning these events as we go along, giving us all a chance to get to know each other better.  Always fun to learn more about each person's story.  It was raining, so we had to move the party inside the RV park's meeting hall from the patio overlooking the river.  The rain, however, did produce a beautiful double rainbow--just a gorgeous sight! 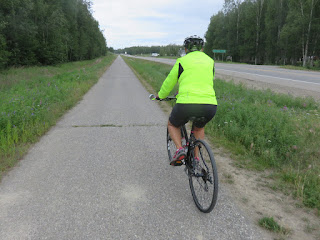 Didn't get this into focus, but lots of wildflowers along the path 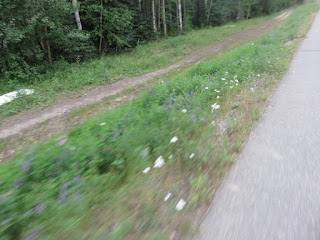 Downtown clock tower, near the park beside the Yukon Quest Headquarters 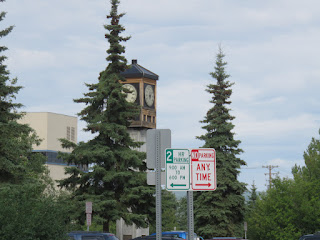 Inside the Cultural Center 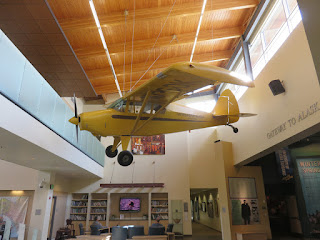 Fascinating to learn about the nomadic people who roamed different parts of this continent before the first Europeans arrived, how they moved with the seasons to follow food sources and learned to adapt to changing and challenging conditions. 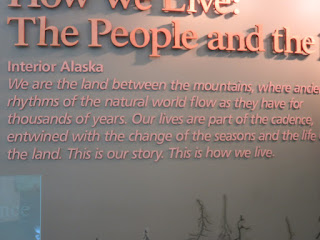 The elders on stage 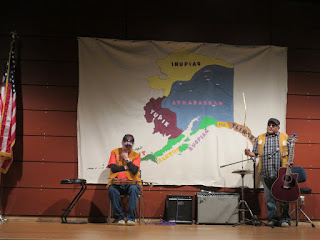 Some of the college and high school students demonstrating some dances 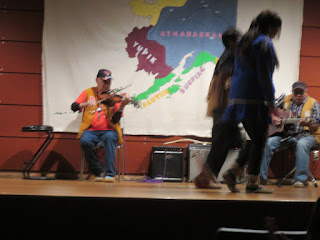 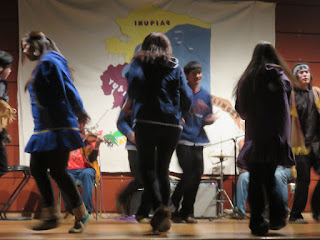 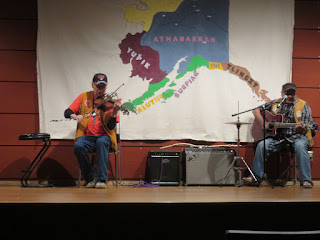 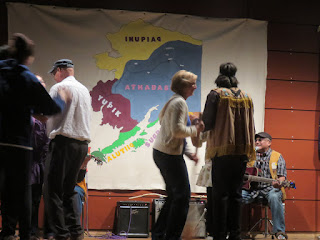 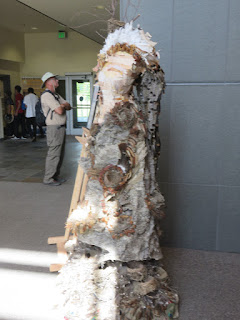 Lovely mosaic embedded in the sidewalk outside the cultural center. 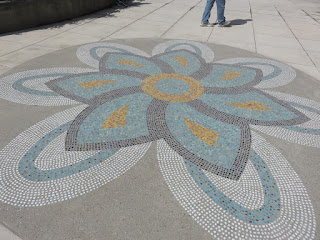 One of the outbuildings at the Cultural Center--we were so taken with all these beautiful flowers, especially how lush and huge lots of the annuals like petunias were--guess it's the extended hours of sunlight during the summer that accounts for their size 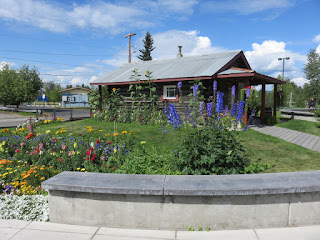 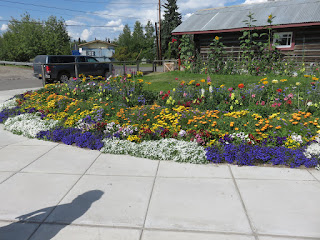 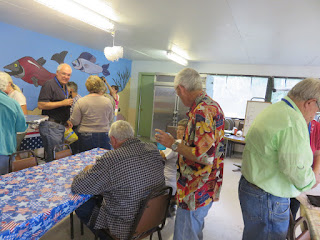 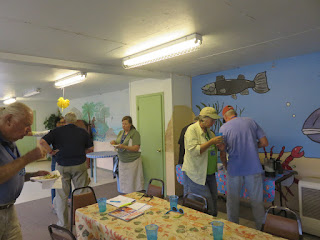 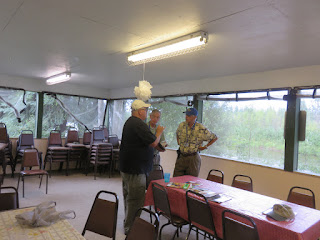 Trisha and Larry, our friend who's the Naval Academy grad and who carries his wood turning lathe with him in his RV! 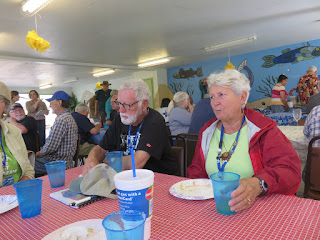 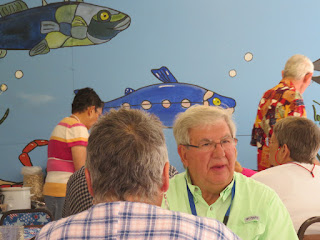 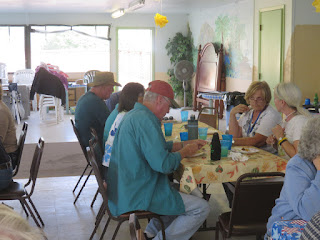 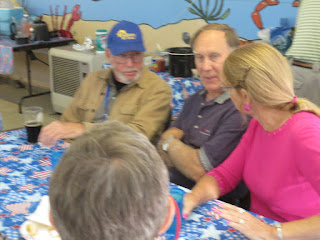 Carolyn--can you believe it, she and her husband, Don, are still RVing at 84!!  There's hope for us! 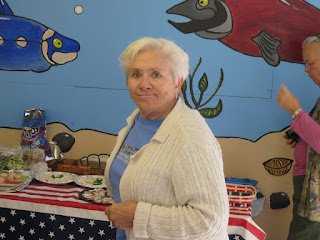 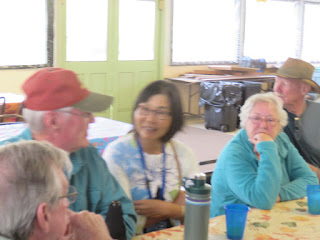 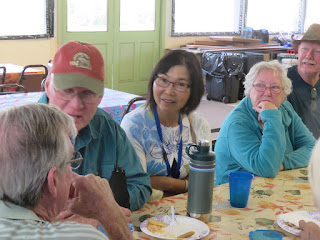 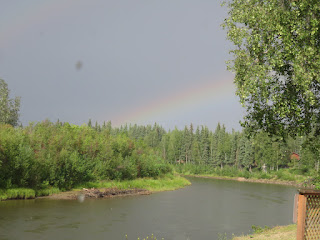 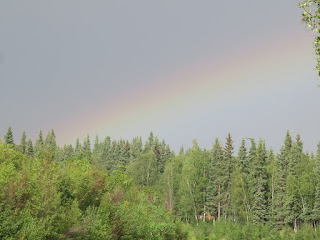 And you can just see the second rainbow above the main one!  Pretty special! 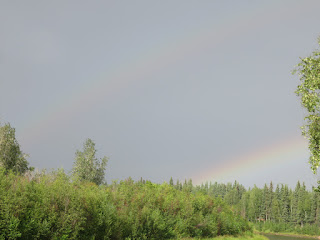 I did laundry that evening and these were their flower planters outside the laundry building--pretty appropriate, huh? 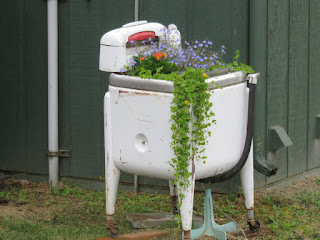 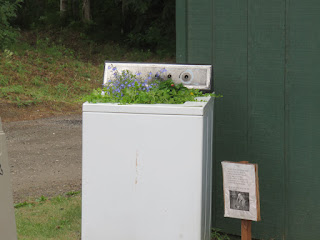