The next morning a group of us went out halibut fishing.  Homer is known as the halibut fishing capital of the world, and they are so right.  We had booked our reservations several days before, and when we got to Homer, Trisha initially thought she was going to feel well enough to go, so we stopped by the charter office and bought licenses for both of us.  Unfortunately, it was that afternoon when she realized that she was getting worse and could not go, so we found one of the other caravaners who wanted to take her spot on the boat.

So, early Sunday morning we headed out to the charter--it was a much smaller boat than the one we had been on for salmon fishing in Seward, with only 16 passengers.  This made it a lot nicer, since it was not so crowded.  The captain had a crew of only two deckhands, two young women who spend their summers in Homer working on this boat.  One of them is still in college and one just graduated.  She usually spends the winter months traveling to other places--she did some English as a foreign language teaching in Costa Rica--such a typical scene for Alaska, with so many young people coming here for part of the year to do things like this.  Anyway, though I'm not a fisherman, we had said when we made this trip that we should at least go salmon fishing one day and halibut fishing one day. I learned that halibut fishing is quite a bit different than salmon fishing.  Halibut are a bottom fish, so we were fishing in much deeper waters, with heavier tackle--the sinker weighed a full two pounds, while the one we used for salmon was just about half a pound.  Much shorter and heavier rod, heavier line and reel.  They used both herring and some octopus for bait.  There is a two fish per day limit, but it's interesting how they figure this:  you're allowed to catch one fish that's 29 inches or less in length, and then one other fish of any size.  So they tell you to first go for your 29 inches, to get that out of the way, and then you can work on finding the big one.  They gave each of us a rubber band so that when we pulled up the smaller fish, they would put the rubber band around the tail to designate it as the small one.  They also had an interesting system to know whose fish was whose.  While on the salmon boat, they assigned each of us a number, and then put the fish we caught in small numbered lockers, on this boat they just had two big lockers, given that halibut are so much bigger fish.  So they had a chart with a list of all of us and a corresponding code sign that they carved into the tail of the fish so they could know whose bag to put the filleted fish in at the end of the trip.

It took about an hour and a half to get to the spot where the captain wanted to fish, and, though some folks started catching fish fairly quickly, he decided that it wasn't as good as it usually was, so they pulled anchor and we motored about another half hour to another spot.  Well, everyone on the boat caught their limit by early afternoon, even though the charter was for the whole day.  Most everyone caught their small one fairly soon, though two or three folks didn't get one until later in the day.  The trick was to decide what to throw back and what to keep.  Scott's first fish was over 29 inches, but just by a little so he decided to throw it back, since he's a pretty experienced fisherman and was convinced he'd get a bigger one later one--which he did!  Though they didn't have scales onboard, the deck hands estimated the weights, and told us that, after filleting you'd net out about 55% of the weight.  So I ended up with a little over 11 and a half pounds in my two fish, which means that they roughly averaged a little under 11 pounds each.  The first one was right at 29 inches and, though the second one was just a couple inches longer, it was a much fatter fish, there was more to it.  Once I caught the second one, I was happy and decided to keep it and quit, fearing that if I didn't do that, I might end up the day with only one fish.  Scott, being the experienced fisherman he is, kept throwing back fish after fish, until he was so tired out he finally said, the next one is the last one, no matter the size.  Well, his patience was rewarded as he caught the biggest one of the day!  Turns out that he has a cousin who spends a lot of time in Homer fishing, so he took Scott out the next day to his favorite spot and Scott hooked two much bigger fish!!  And later, we learned that there is a special charter you can take that takes you out at night, so you arrive at your spot about 10:00 PM and you fish for four hours.  So that means you can come back in the same amount of fishing time with 4 fish, two before midnight on one day and two more for the next day--pretty neat idea, especially since we're in the land of the midnight sun!!  Anyway, once everyone had caught their limit and we were headed back to port, the two deckhands filleted all the fish and bagged it for us, throwing the carcasses overboard, much to the delight of the following seagulls!  When we got back to the dock, a fish processor was waiting to take our fish up to their facility, where they cut it up into smaller pieces, bagged and flash froze it for us.  We had enough room in our freezer to take it with us, so we didn't have to ship any home.


Here's the Salty Dog Saloon--a bar that's put together with parts of several historical buildings from Homer.  It's famous as the hangout of the crew from the Time Bandit, one of the boats on the TV show Deadliest Catch.  Scott and some others went the night before our fishing trip, and while they didn't see any of the boat's crew there, still had fun with the local crowd! 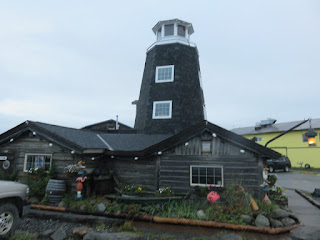 Our boat for the day 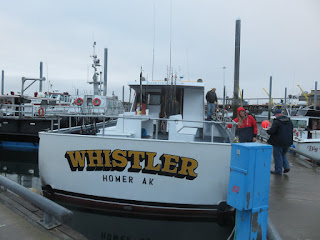 One of the deckhands greeting Randy as we boarded 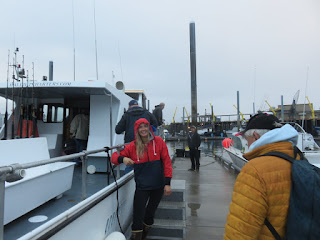 Scott on board, as Randy boarded 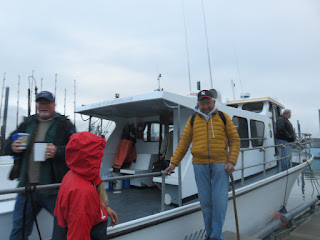 Heading out of the harbor 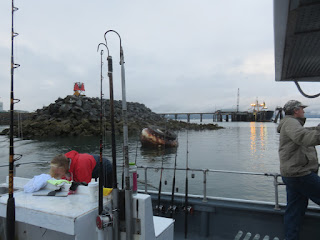 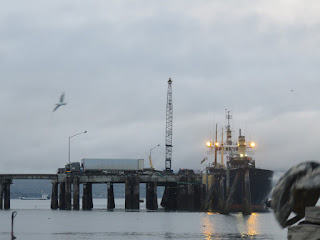 We weren't the only boat heading out! 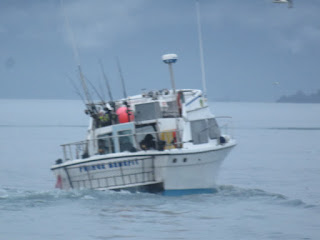 Row of condos by the shore 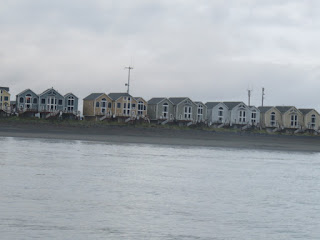 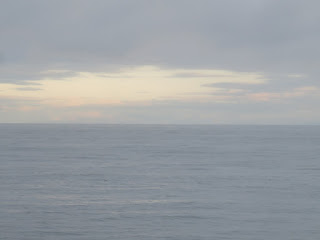 Sea otter in the harbor 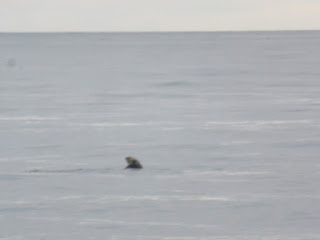 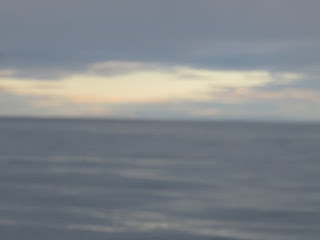 Scott and Randy on the rear deck as we went out 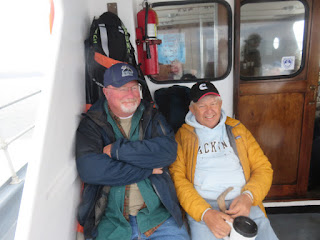 Jodi on the other rear deck seat.  The guy in the background was a teenager who was with his brother, his dad, and his grandmother--all of whom caught their limit!  Jodi spent her career as a nurse in the military, retiring as a full colonel.  She spotted an orca whale as we were on the way to the fishing spot, but it was up and down too quickly to get a camera shot 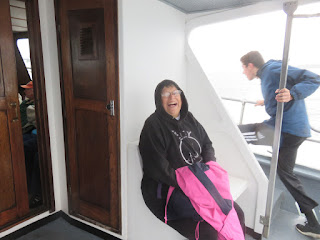 Ken, Don, Ann and Harlan, inside the boat, on the way out 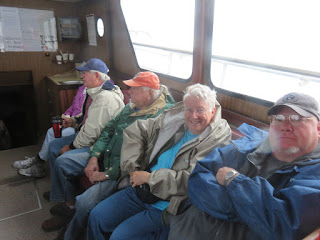 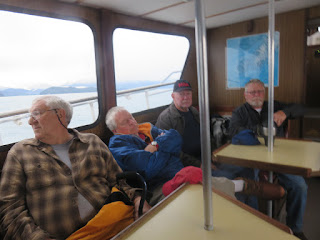 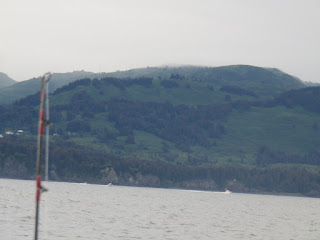 The deckhands, preparing the bait 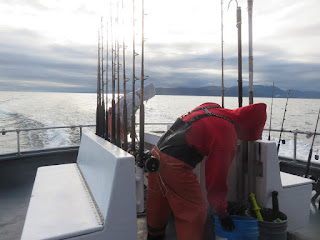 They cut up these herring for the hooks 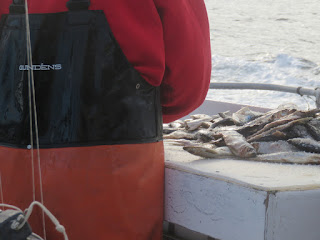 Some of the catch, once we all caught our limit 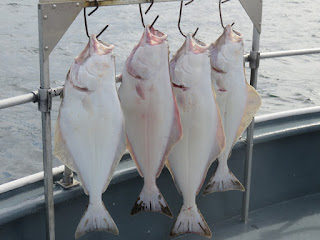 That's Scott on the right, and the biggest fish was his catch! 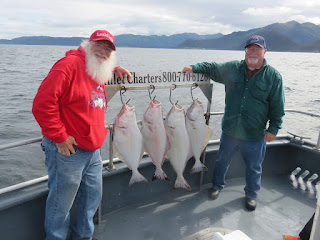 This is the top side of the halibut, ready for the deckhand to fillet it 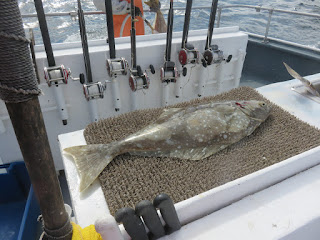 She made quick work of each fish, whipping her sharp knife around like a chef at Benihana's, ending up with two fillets per side. 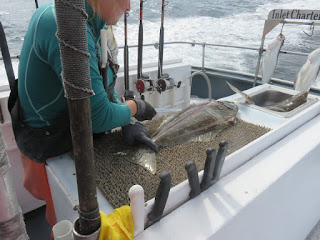 The bottom side of the fish 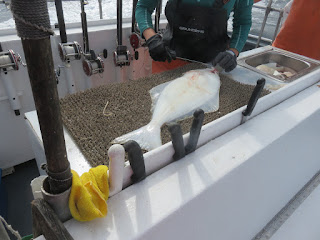 Walking back along the dock on the way to the fish processor, saw these rather interesting campers! 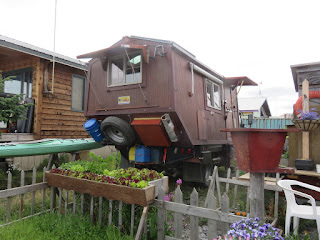 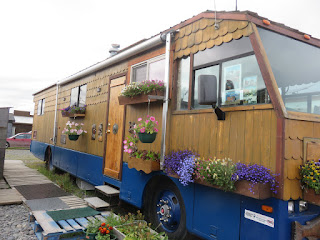