Our first real destination on this trip was Clinton, Iowa where we had a meeting on Friday.  Our hosts were very gracious in showing us around the area and we really had a great time.  We stayed in a city park right on the banks of the Mississippi River that encompasses an RV campground, very conveniently located to where we had our meeting and to the local minor league baseball team stadium.  Our site was adjacent to a heavily trafficked railroad line--which some might find objectionable due to the frequent rumblings of the cars and the train whistles.  But, to an old railroad lawyer, this was just music to my ears--could hardly imagine a more soothing lullaby for falling asleep!!

Thursday evening we strolled over to watch the Lumberkings, Seattle's Class A affiliate, score an impressive victory.  We used to have part of a season ticket package to the Braves and always enjoyed going to watch baseball, but this was a really fun alternative to the Big Leagues--small stadium, general admission tickets, got seats right behind home plate and all for six bucks a ticket!  When the manager needed to call in a relief pitcher, there was no phone call to the bullpen--he had to trot down to the bullpen himself!  It was a lot of fun--all the locals seemed to know each other and everyone was having a grand old time, including us!!

Friday after our meeting our hosts took us to Fulton, Ill, just across the river, to visit de Immigration Windmill.  I never realized the heavy Dutch influence here from lots of early settlers, but they have a windmill museum which we thoroughly enjoyed.  The museum had many working models of a number of different styles of windmills, showing the variations in design and operation.  I had never realized how many different uses there were for windmills, like lumber sawmills, making paint, rope, and of course grain grinding.  Across the street from the museum they have a working windmill, built in Holland, then disassembled, with each piece numbered, shipped here and reconstructed.  I also never realized how windmills are designed to be rotated in order for the sails to catch the shifting winds.  With the rotating caps on many windmills weighing tons, this is no small feat, and most of them, like the one we saw, rely totally on human effort to turn a huge wheel to rotate the cap.  This one is a working mill, with huge grinding stones, where they grind corn, flax, buckwheat, mustard and other grains.  Very impressive!

That evening we drove through Eagle Park, a large and very beautiful park that brought back memories of some of Louisville's grand parks.  Our hosts showed us the lodge where one of their daughters had gotten married, overlooking the river with spectacular views.  Then we enjoyed a lovely dinner at Rastrelli's, Clinton's landmark Italian restaurant, followed by a rousing performance of Music Man at a small theater on an old riverboat on the river bank.  It's been a long time since we'd seen a performance of this show, but they had some really good actors and singers and it was a lot of fun.


Some shots from the minor league baseball game. 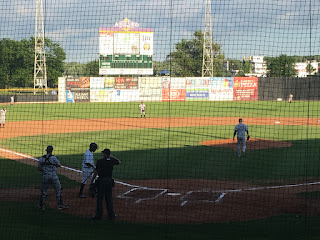 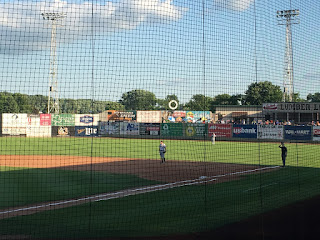 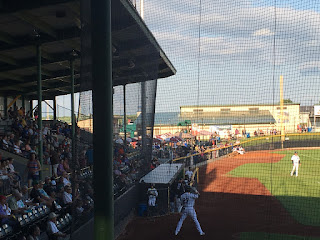 Looking toward the home team dugout; you can see the bullpen in the distance, where the manager had to run down to get his reliever! 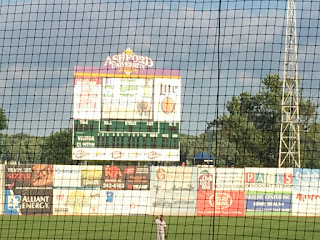 These next pics are from the windmill in Fulton, Ill, the first one showing one of the grinding stones used in the mustard mill. 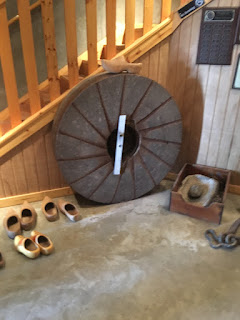 Where they grind the mustard 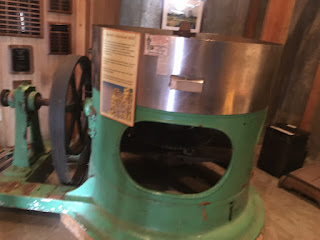 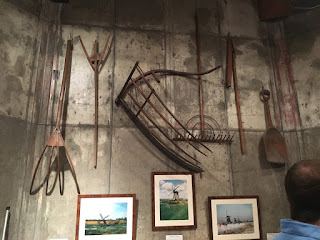 Some of the wooden shoes, typical of what the workers at mills in Holland wore 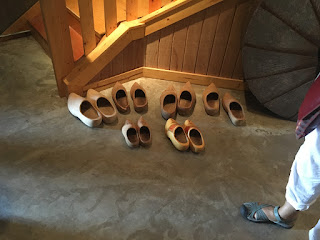 Part of the grinding mechanism for the grain mill 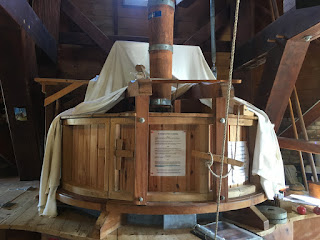 Looking up at some of the support structure inside the windmill--all pieces were marked when they built it in Holland, so it could be reconstructed on arrival in Fulton 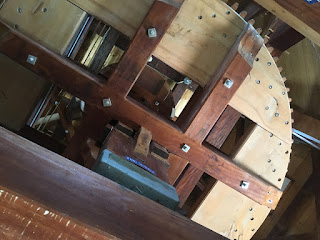 The grading bin, where they did grains in different levels of coarseness 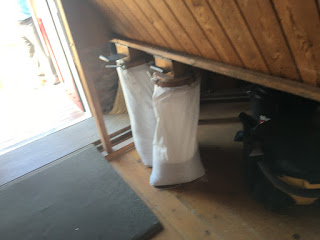 This is the wheel that's turned by hand to rotate the cap, so the sails can take advantage of the prevailing winds.  There is a cable that's moved along a series of cleats on the ground and when the wheel is turned the cable is winched on a drum, rotating the huge cap. 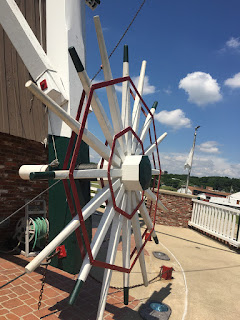 Looking up at the cap 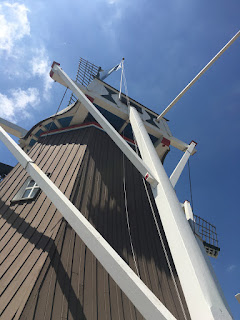 One of the paddles, with the sail furled until the next time the windmill is grinding 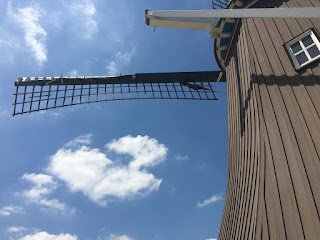 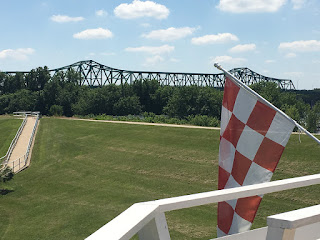 A fuller shot of the windmill 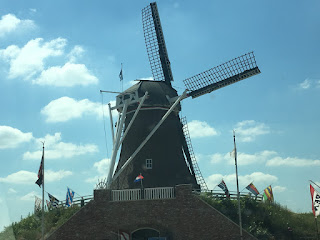