We left Clinton on Saturday and headed toward Aspen, pretty much just three days of driving.  The first night we made it to Lincoln, Nebraska, the second night we spent in Ft. Morgan, Colorado, and then got into Aspen on Monday afternoon.  Rather long days of driving, but we wanted to go ahead and get to Aspen as soon as we could.  Fortunately we had good weather, and our fears of strong winds driving through Nebraska didn't materialize.  Driving through the heartland, we saw miles and miles of cornfields and some huge feedlots for cattle.

When we got into the campground at Ft. Morgan it was one of the hottest days we've had since we left--well into the 90's!  Soon after we got hooked up at our site, the power in the campground went off, so everyone was out of their rigs, wondering when they would get it restored.  Fortunately we could run the generator to power our air conditioning.  Eventually the campground got power restored, but it still took several hours for it to cool down to a comfortable level.  Really got us looking forward to getting to the mountains and cooler temps!  The next morning when I took Sophie out for a walk, saw a beautiful sunrise over a little pond near our site, with some geese gliding across the water.  The cottonwood trees are in full bloom, with the cottony stuff flying everywhere--looks like snow where it collects on the ground!

From Ft. Morgan we were not too far from Denver, and after Denver really began to climb into the mountains to Aspen--just love seeing all the different landscapes, wherever we go in our travels!  Jack Perkins, the former TV journalist, coined the term "marveling," meaning just wandering the world, experiencing all the marvels the planet has to offer.  We have truly experienced this phenomenon over these last several years we've been RVing and we never tire of seeing the beauty of this country!

We had planned to park the RV in a campground in Basalt, about 30 minutes away from Aspen, as this is the closest RV campground to Aspen.  Since we're staying in Shelley and Ken's house, we knew this would be something of an inconvenience to try to get everything we would need for a month off the RV and to their house, involving several trips and the invariable forgetting something we needed.  So, much to our delight, when Shelley and Ken arrived in Aspen a few days before we did, they measured the driveway and figured that it might be possible to park the RV right there.  Anyway, we knew it would be close whether the RV would fit, so we first had to park it in Basalt, unhook the tow car and drive to their house for me to get a visual and make some more measurements and then go get the rig to see if I could do it--though it took a little maneuvering, I was able to get it into the drive, with enough room for them to get their car in and out of the garage--woohoo!   They were also glad, since they have a couple of Ken's son Jack's college friends staying in the house while they attend the Aspen Music Institute.  One of them is an opera singer--he has the lead in an opera to be performed later this summer, and then will go to Germany for a Fulbright Fellowship--and one is a pianist, who is working toward eventually becoming a music and voice coach.  They both have pretty intense schedules, with classes and rehearsals for upcoming performances, so some nights they don't get home until 10:00 and then need to fix supper.  So, with a full house and such different schedules, it's been a help to have the RV right in the driveway, so the guys can use it as their kitchen, and have all their food in the RV fridge and cabinets--so a win win for everyone!

Monday evening we had dinner at the home of Shelley's and Ken's good friends, Joe and Edith, who are both lawyers and have an office here.  We've gotten to know them over the last several years and really enjoy their company.  Joe is from Alabama and was offered a football scholarship to play for Bear Bryant, but decided to go to Harvard instead.  After college he returned to U of Alabama for law school and one day was walking across campus where he encountered the Bear, who greeted him by name.  Joe was somewhat astonished, and told Bryant how he couldn't believe he remembered his name after 3 years.  Bryant's response:  "Son, you're the only recruit who's ever turned me down to go to Harvard"--what a hoot!  Anyway, Edith's daughter was here for a few days, along with her boyfriend and a couple of other friends, all of whom just graduated from Williams, so it was fun to see them, too, and hear about all their plans.  A great welcome to Aspen!


Coming through Des Moines, a view of the state capitol building. 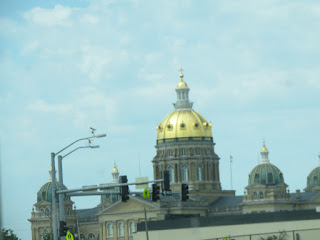 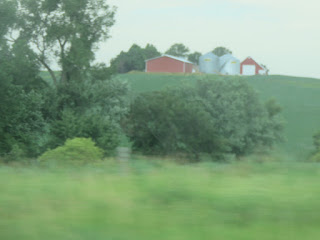 Always love anything to do with trains, here as we come into Omaha, they had some locomotives and cars up on a monument setting 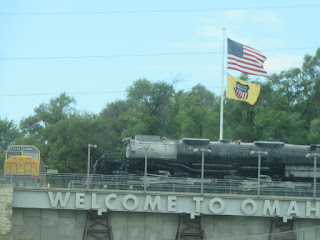 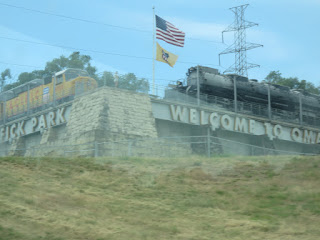 Crop duster over the cornfields--it was amazing how powerful the smell of the pesticide was as we passed by. 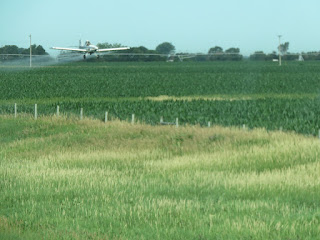 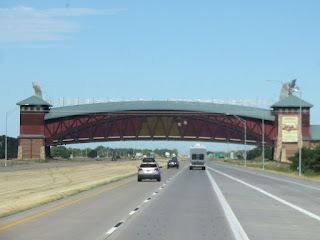 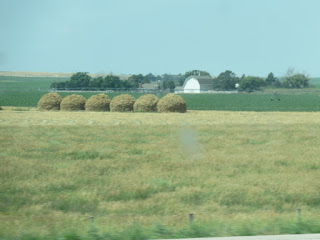 The sunrise over the pond at the campground in Ft. Morgan, CO 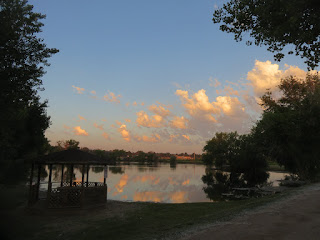 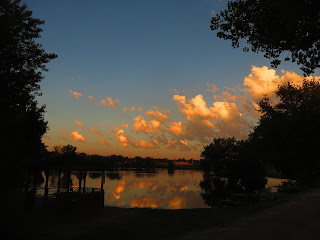 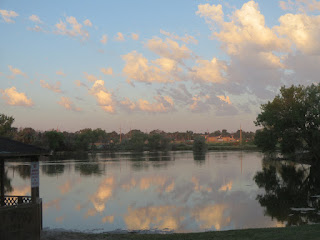 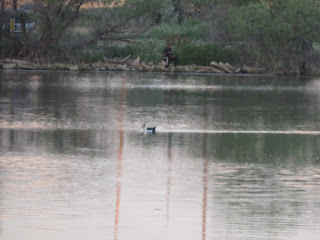 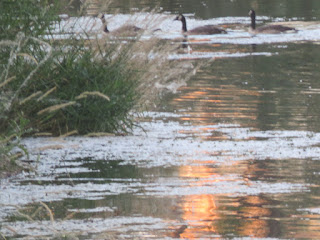 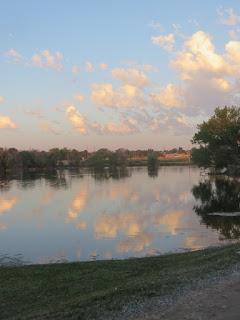 Ahh, the snow capped peaks of the Colorado Rockies--we're beginning to feel a Rocky Mountain High coming on!! 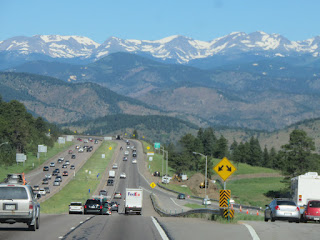 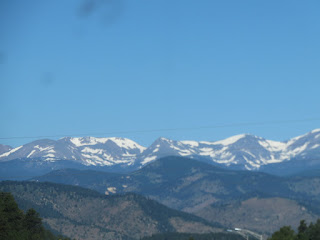 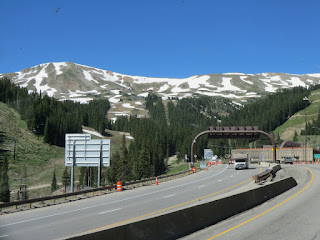 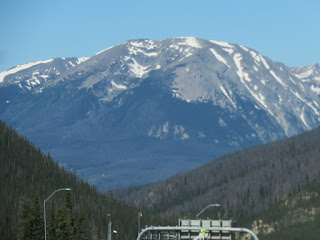 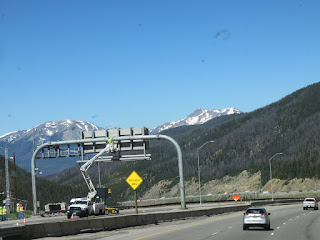 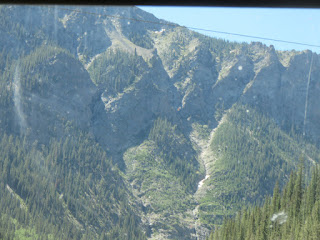 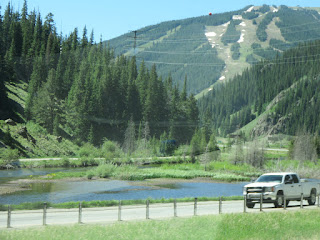 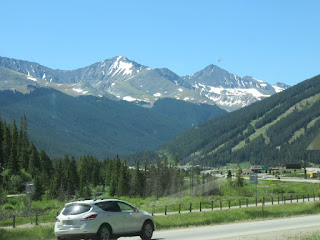 Some of the ski runs near Vail 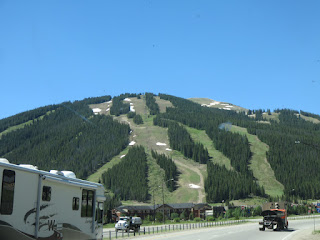 I-70 runs right along the Colorado River, and it's a spectacular drive! 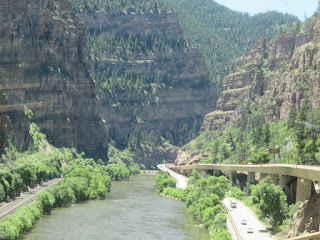 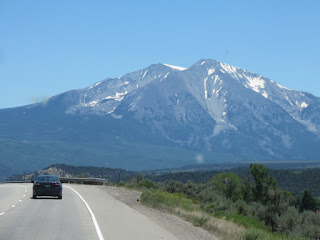 Joe and Edith's dog, Stevie, lounging in their garden! 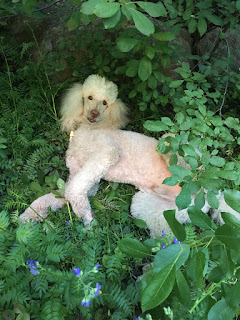