Friday morning Shelley suggested that, rather than try to be overly ambitious and go back to the Ute Trail so soon, we should just work with the Smuggler Mountain hike and add to it in increments, to help us get more acclimated sooner.  So that's what we did.  We started downtown on the Hunter Creek Trail, and then took a connecting trail that led us to the top of Smuggler Mountain and then came down the road like we did on the first day.  This made for a really beautiful hike, as the Hunter Creek Trail quickly leaves town behind and winds along Hunter Creek, through lots of beautiful aspens and fir trees, so it's really cool.  It was an overcast day, so we were glad we took our rain jackets--Shelley and Ken had warned us that the weather here is very unpredictable, and none of the forecasts can be safely relied on, thus advising to always be prepared for everything.  It rained on us off and on for a lot of the hike:  it stopped raining, warmed up, so we took our rain gear off, as well as the next layer, then it would start again and we'd layer up once more and so on and so on.  But it was a wonderful hike.  We stopped for lunch at a lovely spot overlooking part of the valley, which was really nice.  There were several good steep climbs to get the ole heart pumping, so it's really helping us get adjusted.  Overall nearly 1000 ft. of elevation gain and then loss when we came down the mountain--just over a longer distance than the Ute Trail, so that was good for our regimen.  Shelley's and Ken's dog, Davi, a Portuguese water dog, goes hiking anytime they do so he came with us.  He's such an amazing dog--when Shelley would lead the way and be up ahead of us, he would walk with her for a while, then look back to make sure we were okay and then come back to us, sort of like he was herding all of his charges and making sure everyone was okay!  Coming down the Smuggler Mountain road, he always stops at a particular tree, since that was the first place Shelley and Ken stopped with him on their first time doing this hike to give him some water.  So he stops and sits, and waits for Shelley to pull out his water bowl!  And then, when we get down to the bottom of the road, he knows he has to go back on the leash to walk through town, so he sits by the sign and waits for Shelley to get there with his leash--a very smart dog!  And he's so good with Sophie--to see this 55 pound dog playing with little 8 pound Sophie is so sweet.  He'll let her play tug with some of his toys and even let her think she's actually pulling it from him, when in actuality he could give one good shake and fling her across the room.  They really have fun together!

Anyway, it was a great hike!  Later that afternoon some friends of Shelley and Ken arrived to spend the night.   They had a function to go to first, but they met up with us at the Ideas Festival presentation for the evening, which, as always, was fascinating.  Going into any detail on this one would definitely be TMI--so I'll just give you the title:  "Let's Talk About Sex."  It was quite provocative, but extremely interesting.  Such a wide variety of topics presented at the Ideas Festival, all designed to make you think more deeply and critically and very stimulating.  Just so glad we're able to be here and have the chance to attend so many of these events. 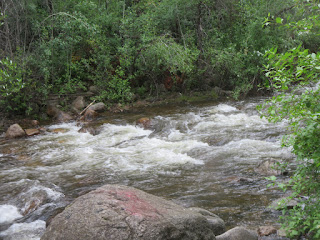 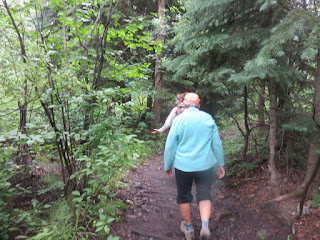 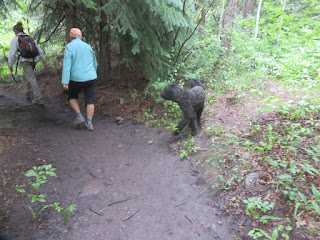 Such a good hiker!! 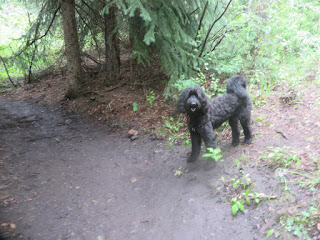 Pretty flowers along the creek. 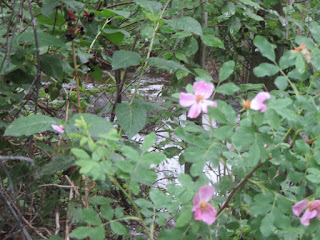 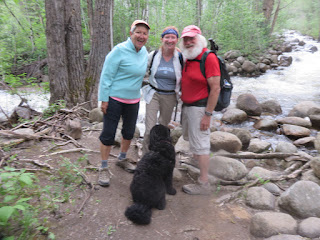 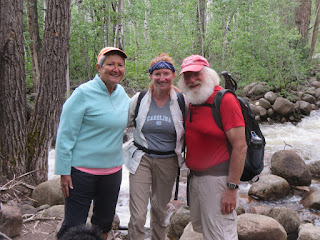 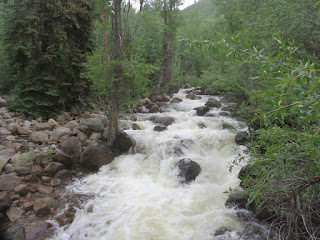 And here we are in the rain! 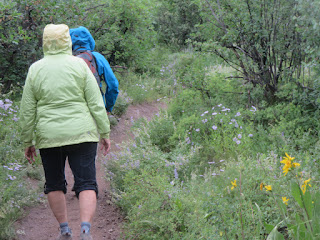 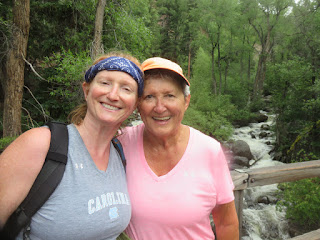 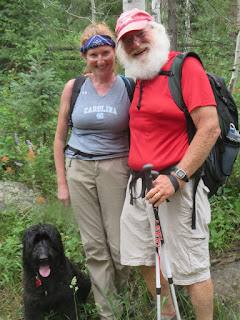 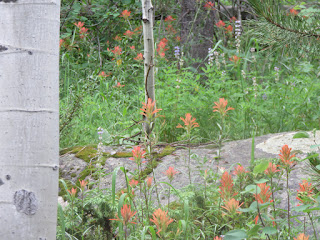 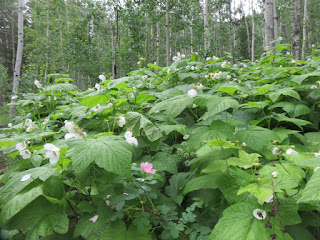 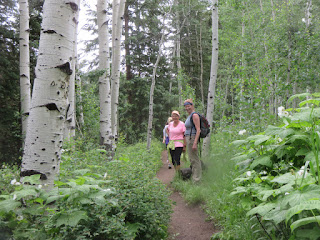 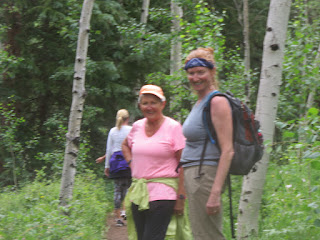 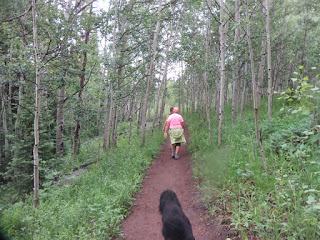 This sign has extra dog leashes for people who need to have control of their dogs--Davi is such a good dog, that Shelley has voice control over him and he comes immediately when she calls if he's not right beside her. 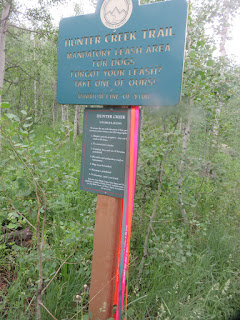 Some nice views of the valley, and then snow capped peaks in the distance. 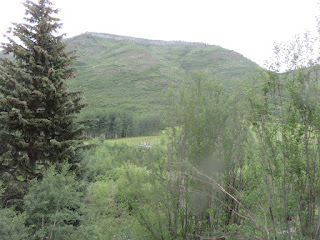 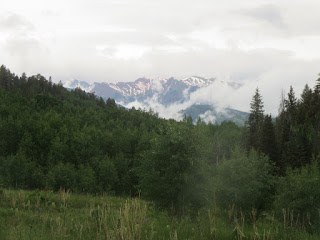 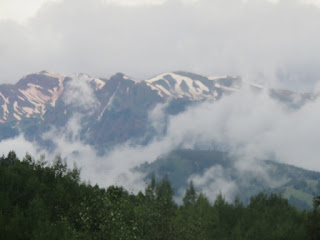 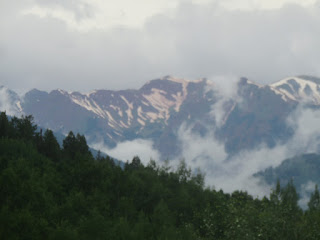 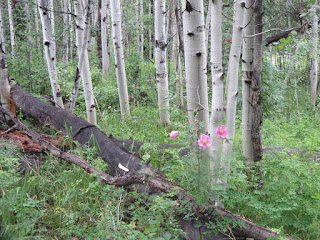 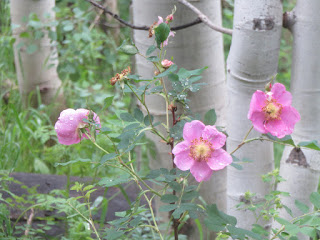 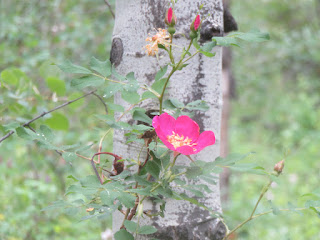 Where we stopped for lunch, looking down into the valley 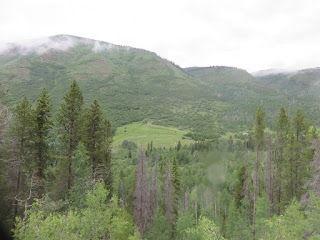 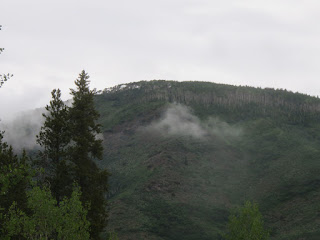 On the way back down Smuggler Mountain road, another view of the half pipe at Buttermilk 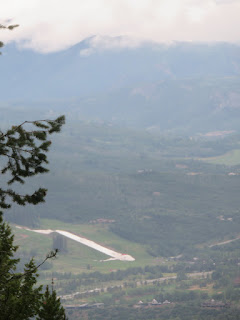