Trying to catch up on my postings, and am still a few days behind.  It's now Thursday morning, but this post is about our time in Rocky Mountain National Park last Saturday-Monday.  Hopefully in a day or so I will be caught up.

Before I go any further, I need to say a few words of tribute in honor and memory of one of God's most beautiful angels, Jill Wolyeat, who went home to God Monday night.  She was a dear, dear friend in Cherry Log, with whom I sang in the choir, and who was such a wonderful friend to Trisha and me, as well as to anyone she met.  She and her lovely partner, Pam, have been two of the most precious people we've known and we are so deeply sorry for Pam to have lost Jill way too soon.  Jill was faced with fighting various health issues, too numerous to name, and especially for the last year and a half.  While most of us would have given up in the face of such challenges, Jill never once complained, but rather always tried to make everyone else feel better.  Her indomitable spirit, deep faith, and cheerful smile through all of this has been an inspiration and an ideal to which all of us should aspire.  This morning I looked outside as I was watching the sunrise and saw a dove sitting near the RV, and I know she was looking right at me.  Many who know me have heard me say how my Daddy often appears to me as a dove since his passing, and at first I thought it was Daddy.  As I sat there and looked, however, I became convinced that this dove was Jill, and I know now that she's flying high and bringing love, joy and peace to everyone she sees.  God bless you Jill; and Pam, may you find the strength to face these difficult days without Jill by your side.

Jill on the right, with Pam when we were in Nashville a few years ago--celebrating our choir's performance at the Disciples of Christ Church national convention.

We had originally planned to leave Aspen last Friday, July 5, but decided to stay an extra day, so we could drive Shelley and Ken back to the Denver airport on Saturday to save them from having to rent a car.  Turned out to be a good thing, as it gave us the chance to upgrade our bikes.  We had been asking bike shops in several places along the way if they ever took used bikes as trade ins but had not found anyplace that would, only a couple of places that would try to sell them on consignment.  But luckily there was a shop in Aspen that sells used bikes at its other location in Carbondale, and they sell the brand of bikes we had.  So Friday we went to Carbondale and had a great experience with the owner and his partner who were so nice and helpful.  We rode several different models and styles, and ultimately found bikes we were both comfortable with.  They are a good bit lighter than the geezercycles, plus have 24 speeds instead of 7, and we're tickled to have this added capacity for the hills of this part of the country--so now we're happy campers, I mean bikers!

Ken had not been able to do any hiking due to his ankle causing him so much pain, so he had rented a bike when he and Shelley first got to Aspen, and he'd been taking long rides up to Maroon Bells each day with his friend Stan.  This is quite a steep climb, and quite a workout-last year we had been up there to hike and had seen a lot of cyclists who had ridden up to the top in vans with bikes on top, so they could ride down, for the thrill of the fast curves and high speeds going downhill.  But Ken and Stan had ridden up each day--quite a feat.  Anyway, Friday afternoon before he took the rental bike back to the shop, he and I went riding for an hour or so and he gave me a tour of many of the bike trails around Aspen I had not yet explored.  It was really fun, and he was mercifully kind to go slowly enough for me to keep up with him!  It was a great ride, and gave me the opportunity to learn some about using the newfound multispeed capacity of the new bike.  We ended up back in town and he showed me the original ski lift when the skiing was first developed--very interesting.

Friday evening we went to another of Aspen's wonderful downtown restaurants--4th of July week is about the busiest Aspen gets all year, and it's just a festive atmosphere all over town, with kids laughing and playing in these wonderful fountains at one end of a pedestrian mall--several streets are closed to vehicular traffic and just are set up for walking, with a beautiful stream running down the middle, cafes and restaurants with outside tables and a fun place to be.

Saturday morning we all had one last chance to be together with Ken Sr. and Carleen, having breakfast at a wonderful little bakery/cafe downtown.  We sat at a communal table, where you just have a seat and share with whomever happens to be there--met a woman whose husband is trying to decide on knee replacement surgery, so I told her about my wonderful experience with my new knees--hope he does it soon, from what she said.  Then said goodbye to Ken and Carleen and drove Shelley and Ken to the Denver airport.  On our way out of town we stopped to get a picture of the funniest sign in the lawn by the local Catholic Church--there has always been a statue there of the Virgin Mary, but apparently it has been temporarily removed for some cleaning/rehab.  So they put up a sign that said "Mary is away visiting her son, back in June"--pretty clever!  On the way to the airport, Shelley and Ken were laughing about whether they would have any trouble getting through airport security with the bones they had saved from the restaurant--Shelley told us later  that the TSA person looking at the Xray scanner for her suitcase was a bit curious!  Anyway, they got off fine, and will be preparing to go to Duke soon after they get back to Atlanta for Ken to have surgery on his ankle.  Sure hoping it goes well and gives him relief from all the pain, and allows him to get back on the slopes by next ski season.

Then we headed off for Estes Park and Rocky Mountain National Park.  On the way we passed through the little town of Lyons, which is Trisha's maiden name, so we got several pictures of signs there.  Then had a spectacular drive into the park--this park has the highest average elevation of all the national parks, according to the literature we got at the visitor center, and the drive was just wonderful, though a bit breathtaking and nerve-wracking at times, with the sharp turns and switchbacks and steep drop-offs!  They have these tall poles along either side of the roadway in the park, apparently so snowmobilers can determine the edges of the road when they close it to vehicular traffic in the winter.  We saw herds of elk along the way, including one bull elk with a majestic antler rack, just lying down in this meadow, surveying the scenery, including a number of mama elk with their new calves, no doubt Mr. Elk feeling quite proud of himself!!

There was only one campground in the park that had openings, and it was on the other side of the park from where we had come in, but it gave us the chance to see lots of spectacular scenery on the drive.  We found a nice site and the campground was full of happy folks camping, sitting around campfires, families having fun--we were glad to be there!

Sunday morning we took a hike on the Colorado River Trail, which parallels the river for much of the way, part of the way being right by the river bank.  It was a delightful hike, passing in and out of verdant thickets of tall pines, spruce and aspens, out into the sunlit meadows, with lots of lovely wildflowers and vistas.  We hiked almost 8 miles, and it was not too steep an elevation gain, and was very pleasant.  We're gradually increasing the length of our hikes, building up more endurance, and having loads of fun!  We were right around 10,000 ft, so we're also building up our tolerance for the higher altitudes.  Just as we got back to the RV, it started to rain, and as we relaxed over lunch in the carhouse, we looked outside to see hail mixed with the rain!  Fortunately not very big hailstones, so no damage to the vehicle, but it was a sight to see this--after so long in the arid desert parts of the southwest, to see rain and hail--after it had rained the night before as well--was a welcome respite.  But, like most rainstorms here, it was over pretty quickly, and the sun came back out.  So we went back to the campground and just chilled for the rest of the day.  Took a leisurely nap and got my mirror installed on the new bike, along with the pump and made some other adjustments on the rack to better accommodate the new bikes.  The folks at the campsite next to ours had checked out, but had left a lot of firewood behind, so we were able to have a nice fire  later in the afternoon and evening.  Trisha so loves a campfire and we just enjoyed sitting in its warmth, looking at the smoke rising from other sites, and had a wonderful dinner of grilled veggies!

Pretty steep drop off along the road in the park

Still a lot of snow near the visitor center

Lots of mama elk with their babies, resting in a meadow as we drove through the park

Some more mamas and babies, early in the morning as we were beginning our hike on the Colorado River Trail

Shots from our hike 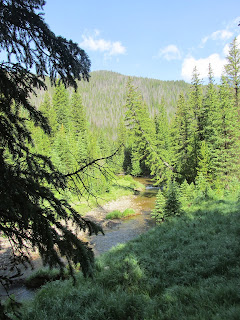 Ruins from some cabins from the old settlement of Lulu City, in the late 1800's

Finally got to see a moose!

Chillin' at the campground after our hike!

Scenes from the drive from the park to our friends' ranch near Yampha, CO on Monday.