Last Friday morning, we left St. George, Utah, heading for Los Angeles.  Though it's been a while since we've done much driving on interstates, we needed to make some time, so we took I-15 through the Virgin River Gorge into Arizona and then on through Nevada and into California.  The gorge is a really beautiful drive, with some great views of sharp, craggy mountains and deep drops down to the river below--really a great drive!  In Nevada, I-15 takes you right through the middle of Las Vegas--this  was the first time we had ever been there.  One time a number of years ago when we were coming back from a family skiing vacation in Park City, Utah, our plane got diverted to the Las Vegas airport where we had about a 2 hour layover, but had never seen the downtown area or the famous strip.  There are rows and rows of slot machines in the airport, many of which take nickels, so I thought it might be a lark for the kids to see what a slot machine was, and handed each one a nickel, me being totally unaware of the rules.  Well, there is a bright line on the floor in front of the slots and the instant the kids crossed that line, a swarm of employees descended on us to inform us in no uncertain terms that minors were not allowed past that line!  So, before Friday, that was our one and only experience with Las Vegas.  Friday, we didn't stop, of course, but the drive on the interstate gives you a view of many of the gigantic, and by my lights, gaudy hotels and casinos--lots of red and gold mirrored glass, huge outsized stylistic forms of some of the buildings, great big billboards advertising how "easy" it is to win, how there's free buffet meals for slot players, and the many entertainers performing.  Quite a remarkable sight, and this was in the bright sunshine of the morning!  I can only imagine it at night.  For some this is the pinnacle of entertainment, but not so much for us.  Glad to get through town unscathed, and without a repeat of the scene from Albert Brooks' movie "Lost in America!"

Just as soon as we crossed the border from Nevada into California the traffic started to pick up, and I mean really pick up!  It was bumper to bumper from there all the way into LA, and I guess it's like that pretty much every day.  Although it was even more crowded coming in the opposite direction--people trying to get out of town for the weekend--it was more than too crowded for us, having spent the last 3 1/2 months doing our best to stay off interstates, and all at high speeds.  Really made it quite tense, driving in these conditions, especially when we got into LA proper.  We made our way to an RV park in Anaheim by late afternoon, where we timed it perfectly to meet my brother, Walt, who was making his way from his home in the Los Feliz area of LA, near the Hollywood sign.  We had tried to find a place for the RV closer to his house for Friday night, but the only places anywhere close to him were already sold out, and there's no way we were going to find anyplace to park on the street by his place.  So we had arranged to meet in Anaheim, since that's where our college friends live.

Anyway, we had a wonderful visit with Walt--we had not seen him since last fall when we all convened in Boston to celebrate Uncle Mac's achievement of living longer than any Senterfitt from Daddy's side.  He had also found a delightful vegan Vietnamese restaurant nearby and we had a marvelous dinner there.  Happy Cow strikes again!!  It was good to catch up with Walt, and he's in wonderfully high spirits these days since the Supreme Court decisions advancing marriage equality a few weeks ago.  Now he and Timo are busy planning their wedding and it's so exciting for Walt that he will finally be able to legally get married.  I'm so happy for him, and it just shows all over his whole being!  We really love Timo and will be looking forward to having him in the family.  After dinner we came back to the RV to have some fruit for dessert and visit some more before he had to head back into  LA--felt so bad for him to have to drive over an hour out to where we were, but by the time he headed back into town the traffic was much less, he said.  Turns out that the RV park where we stayed was right down the street from Disneyland, so we got to enjoy a beautiful fireworks display that I subsequently learned happens every night during the summer, right at 9:35.  Not sure I would be as excited about it if I lived right there all the time, but it was pretty to go outside and see the show.  It was also nice to see all these families having fun, kids with their Mickey and Minnie ear hats on, laughing and coming and going from a fun day at Disneyland.  Evoked memories of the times we took our kids to Disney World in Orlando--and also made us grateful once again for how nice it was that my parents lived right there, so they were able to take the kids many times!

Saturday morning we drove to the home of our friends Bob and Linda, who have lived in Anaheim for a number of years.  We were in undergraduate school with Bob, and we've enjoyed being part of a group of friends from college who've stayed close for nearly half a century!  We had not seen Bob and Linda since last fall when Trisha had performed the wedding ceremony in Washington DC for the son of the other members of our group, Bill and Mary.  We were so glad the timing of our coming to LA worked out to see them, as they were leaving this morning (Tuesday) to fly to upstate New York to visit Linda's mother.  So happy we didn't miss them on this trip!  They're the kind of friends you stay close to no matter how infrequently you may see each other, and can pick right back up as if no time had elapsed.  Trisha also married daughter, Jennifer, who we had watched grow up over the years, 18 years ago, so we have so many connections.  When Bob got drafted out of graduate school at FSU, he ended up being stationed at Walter Reed while we were still in DC, and Bill was back from Viet Nam and back into grad school at Catholic University, so we were all together in DC as well, when Bob and Linda's daughter was a toddler.  So we had a wonderful time with them, enjoying the renovations they had done to their backyard since we were last in California.  Bob is a biologist, having spent his career on the faculty, and lately as Acting Dean of the College of Natural Sciences and Mathematics, at Cal State Fullerton, so we had some lively discussions about life, with Bob weighing in on the side of scientific analysis of facts on the one hand and Trisha bringing the strength of spirituality to the table--great fun!  And on Sunday night we called Bill and Mary back in North Carolina to bring them into the circle and to plan our 50 Years of Friendship Reunion for next summer--harking back to when we started college in the fall of 1964!

Monday morning we left them to pack for their trip to New York and went to Capri Shoes in downtown Fullerton, not too far away, for me to get measured for a pair of custom made Santa boots!  I'm so excited about this--I know many folks will think I'm over the edge with this, like our kids--but my fellow Santa friends will understand!!  I have read about Capri custom boots for years and have seen their pictures on the internet.  Their advertisements say you can make foot tracings and measurements at home and send them in, but I was too skeptical that home measurements would really work, so I was very excited to be able to be right there in their store so the pros could do it, especially since one of my legs is still a bit shorter than the other as a result of my 1980 bicycle accident.  They will make a custom last for each foot and then build the boots around the lasts, and were quite willing to work with me to send the boots to me to see how they fit before making the final adjustments.  Since I've been doing Santa I've just used some boots from a costume outlet that are not real leather and they're beginning to wear out, so this will be nice to have a good pair that should last me for the duration.

Getting out of LA was no small feat, since there are always endless delays due to construction, wrecks or fires.  We basically had to make it through the heart of LA, even though skirting the real downtown on one of the many interstates there, but we finally made it to Sequoia National Park last evening.  We decided to stay in an RV park just outside the park last night, since we didn't want to take a chance on going into the park and driving to the first come first served campgrounds and finding them full.  So after breakfast we'll head into the park and explore the hiking possibilities!

A few shots as we drove through the Virgin River Gorge 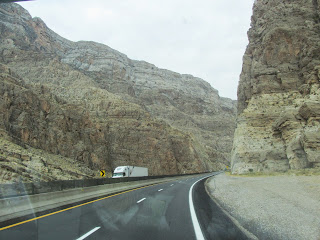 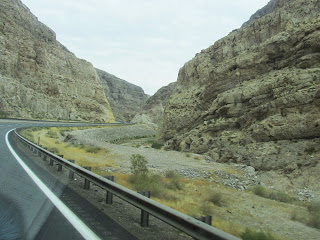 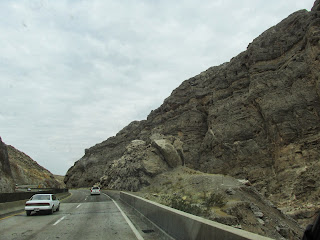 Bob and Jack, solving all the world's problems! 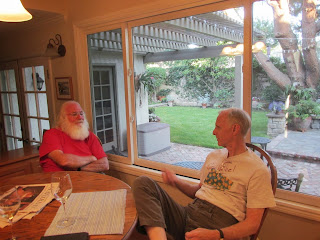 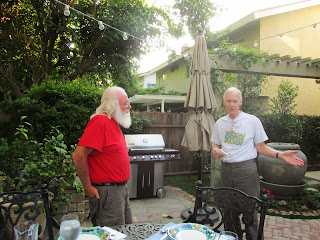 Bob and Linda, in their lovely backyard, as we're about to dig into a delicious dinner! 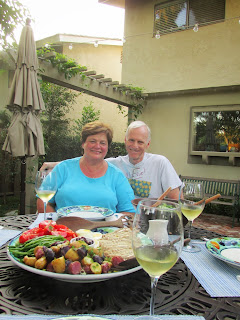 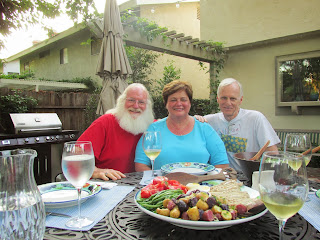 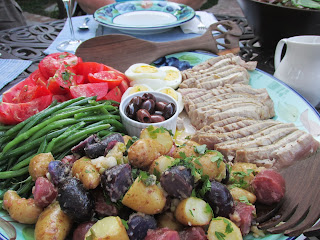 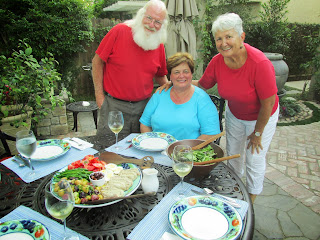 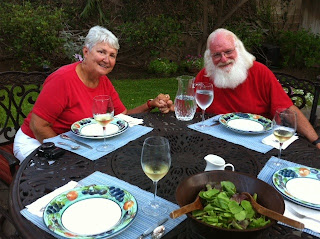 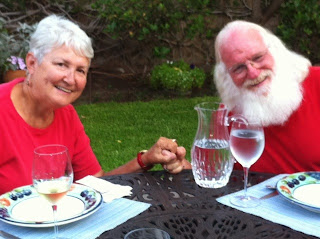 As the evening sets in, these lights evoke memories of Linda's Italian heritage, makes you think you're sitting at an outdoor cafe in Tuscany! 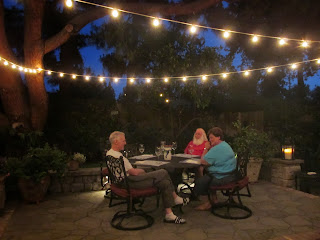 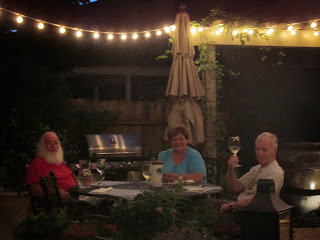 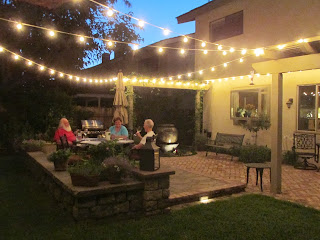 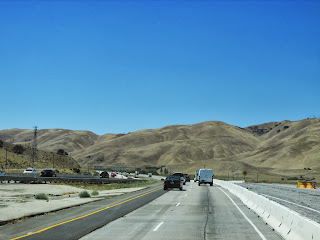 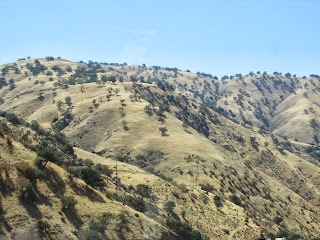 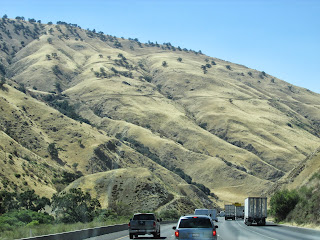 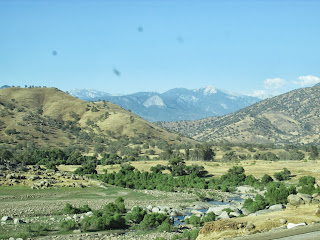 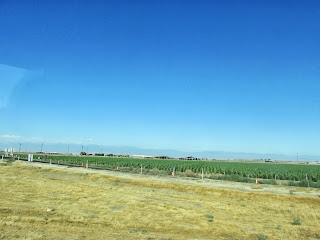 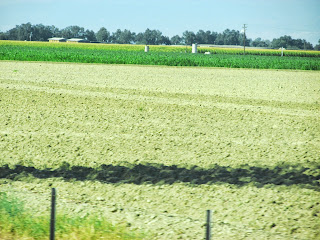