Tuesday, August 20 we headed across the mountain pass, leading us into Jackson Hole.  What a breathtaking view as you come across the mountain and can get the first glimpse of the valley below.  When we first came to this area 20 years ago, I had always thought that Jackson Hole was the name of the town, but learned that this refers to the region down in the valley with the Tetons all around; then there are the towns of Wilson, Jackson and one or two others.  Anyway, as we drove down into Wilson we were surprised--though after 20 years we shouldn't have been--at all the changes since last we saw this little town.  Then there was only the General Store, and now there are a number of other stores, bars and restaurants, and of course, more people.  But it was wonderful to be back where everywhere you look you're surrounded by these unbelievable mountains.

We first headed to Teton Village, thinking we would enter the park near there, rather than drive through Jackson and enter the park there.  As we drove along the road leading to the park, however, we noticed a sign indicating some rough roads near the entrance and warnings against taking the RV all the way on that road.  But we also noticed a big difference from when we were here before--a wonderful paved biking path all along the road from Wilson into the park!  So we stopped at Teton Village and got our bikes down to take a ride, and that's when I discovered the flat on my back tire.  So as I was taking the wheel off to start the repair job, a man in another RV pulled up beside where we had parked, as he and his wife and grandkids were also planning to do some biking.  He had some patches that he said all you had to do was stick them on, without having to use any rubber cement, so he offered me a few of those.  So I put the patch on the tube, got the tire back on the bike and all seemed well.  Off we went, heading back toward Wilson on the bike path, and we made it about 3 miles and then--POP--I heard the tire go again!  So we basically hoofed it back to Teton Village to the parking lot.  But it was still a gorgeous day, beautiful sunshine, and just the excitement of being in the Tetons.  We watched kite gliders soaring and coming down to land at the village, where they had started out by taking the tramway up the mountain to take off.  Lots of folks were out on the path, bikers and runners, and everyone was just having so much fun.  Got back and called a bike shop in Jackson to see if they had the slimmers, puncture resistant tubes like I had put on the old bike in Albuquerque when we first encountered goat heads.  The guy at the shop told me he was familiar with goat heads from when he lived in a place where they proliferated, but that, since there were none around this area, they didn't stock them.  But, since we knew we were headed back to Jackson to enter the park, we stopped by the shop and got a new tube for the bike.

Driving through Jackson was great, to see lots of the places we remembered from our first trip--the huge antler archways into the downtown square, the Cowboy Bar, where the barstools are saddles--but we also noticed how much more crowded it is now, just tons more people, and the streets were pretty clogged with traffic.  So, after the bike shop and lunch, we headed on into the park and stopped at the visitor center to get a sense of which campgrounds might have room.  We found Gros Ventre campground near the visitor center, and also learned that the bike path went into the park and to Jenny Lake, which was wonderful news.  We had planned on going to Jenny Lake where we knew we could take a boat across the lake to hike up to Hidden Falls, so we decided to make the next day a combination biking, boating, hiking day!  We got checked into our site at the campground and then decided to take the driving tour in the afternoon, following the road around most of the park.

The drive is just spectacular, you're right on the valley floor with the mountains all around you, and the changing patterns of the sunlight and shadows on the mountains produce a constantly changing panorama of colors and vibrant perspectives on these gorgeous mountains.  We took tons and tons of pictures, many of which are virtually duplicates, but each seemed a little different every time we would look--I'll try to pare it down to a reasonable number when I start posting the pics!  We got great views of the main Teton Mountains, the Trois Tetonias--the three breasts, so named by French Canadian trappers who first saw these mountains--and Mount Moran.  A story board at one of the viewpoints told how the glacier on Mt. Moran has lost over 25% of its volume in the last several years, which is really sad and has such dire implications for the future.  So much of this part of the country depends on the snowmelt for water, both for crop irrigation and for drinking water and this phenomenon just really poses a threat.

As we continued our drive we could see planes coming in to land at the airport, and it's a remarkable sight to see a jet dropping down into Jackson Hole with the mountains behind it.  Never could quite get the camera quick enough to catch a good picture of this, but it was a cool sight.  We stopped at the Chapel of the Sacred Heart, a beautiful log Catholic Church that's been there for years and years.  The setting is so beautiful, with gorgeous views of the mountains as you get out of your vehicle.  Inside there's a beautiful stained glass window up behind the altar, all quite impressive.  We stopped at Lake Jackson, where there is a dam, and the lake was quite low--never did get to ask anyone if this is a normal seasonal dropping of the lake level or if there is some particular reason why it was so low.

We stopped at a number of viewpoints and at one stop, we met a young couple who had just hiked up to the parking lot and he was carrying a didgeridoo!  So I stopped him and asked if he would play it, and as we were talking to him and his girlfriend we noticed their license tag and it was from Tennessee!  They're from Chattanooga and are visiting a number of the same places we've been out here, quite fun to talk to some other folks who don't talk with an accent!!

Stopped at this beautiful little Episcopal Chapel, and it, too, was a gorgeous log building, with a big bell under this bell tower-portico sort of structure as you walk from the parking lot to the church.  Had a spectacular view out of the window at the front of the church, and we spent some time there, just soaking in the remarkable spiritual feeling you can't help but experience when you're in this unbelievably beautiful setting.  All in all, just a great first day in the park!

Coming into Wilson, views of the Tetons

Along the bike path, between Wilson and Teton Village

These wrought iron moose figures were all along the road between Wilson and Teton Village, to warn drivers about moose wandering onto the road; one sign said 3 moose had been killed along this road in the last year

Look what happened when they opened the door of the visitor center!!  Elks on the run!!  LOL

Driving into the park

One of many shots of bison all over the park 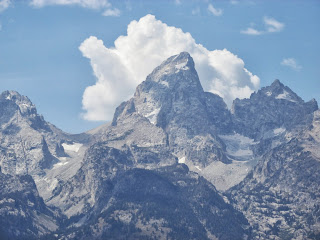 Also lots of free range horses throughout the park

See how low the lake level is?

Up until 1986, the gates of the Jackson Lake Dam were operated by hand; the worker would wheel this heavy cart from gate to gate, engage the gears and manually turn the gears to open the gates--can't believe it was that long before they automated this process.

Pictures on story board explaining the manual operation

Chapel of the Sacred Heart

Outside view of the main stained glass window

Stained glass window behind the altar, inside view

Love these two renditions of Mary, Our Lady of Guadalupe below

Episcopal Chapel of the Transfiguration

View from the pews, looking out through the window behind the altar at the gorgeous Tetons!

Painting of the chapel in snow, this picture was in the narthex

View of the chapel as we were driving on 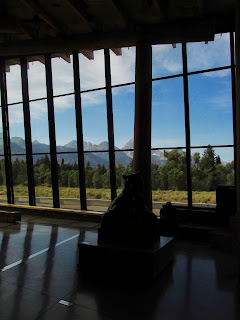 This shot was from inside the auditorium where they showed a video; when the video was finished, they pulled up the screen and this was the view out through the screened windows behind the video screen--quite dramatic! 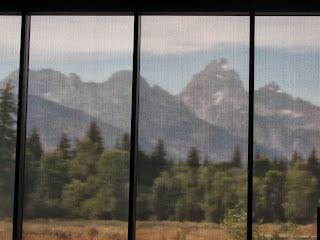 On the way back to our campground, we saw lots of people out of their cars along the road, and this was the subject of everyone's excitement--mama moose and her baby!!

The babies were all a much lighter color than the mothers; same was true of bison