One of the things that John had really wanted to see during his visit to LA was the La Brea Tar Pits.  He is like a sponge when it comes to facts, and when he stumbles on something new, he really gets into it.  He has always been interested in dinosaurs, and when he read something in school about the Ice Age animals and that the tar pits were a site where they had been excavated, he just had to see it.  So I talked to Walt about it and he said that, while he had been by there many times and had indeed walked around the tar pits, he had never visited the Page Museum adjacent to the pits, which houses an extensive paleontology lab and exhibit.  So Sunday we drove to LA for a wonderful day visiting with Uncle Walt and Uncle Timo, as well as a very interesting time at the tar pits.

Timo is a very creative photographer, and has been working on a study of hummingbirds, having become fascinated with them since being in this country--they don't have hummingbirds in Finland.  He and Walt have a hummingbird feeder in their little garden on the deck outside their apartment and he has captured some remarkable images of different hummingbirds there.  But he has wanted a more natural setting, so he recently got some monkey flowers to add to the garden--hummingbirds apparently really like these flowers, and he has now been able to get some of the shots he's been hoping for.  So when we met them at their apartment, John was excited to see the hummingbirds up close, as they came to the garden to drink the flower's nectar.

Then, off to the La Brea Tar Pits, and it was really something.  Right in the middle of LA, here you are in the midst of an incredible archeological site, where there are still excavations going on and much active research being conducted.  Not only is this the site where many fossilized skeletal remains of Ice Age creatures have been found--mastadons, wooly mammals, saber tooth tigers, dire wolves, etc., but this also was once the center of major oil production.  At one time this was the largest oil producing location in the United States, but also accounted for 25% of the world's total oil production, something I never knew.  We parked in the museum parking lot, and as soon as you get out of your car, you can smell the oil and asphalt.  There is a big pool of water on the grounds, with oil and asphalt layers on top, where you can see bubbles from methane gas coming up through the surface.  Even in the parking lot, though, there are some areas that are closed off with concrete block walls and fencing, as there is just asphalt bubbling up to the surface.  Really amazing!  We walked around the big pool, where they have some models of a huge female mastodon stuck in the tar, while the male and their offspring look on helplessly from the shore, depicting what it once was like.

In the museum they had lots of the actual skeletal remains discovered there, along with complete skeletons assembled from some pieces, and fiberglass replications of the rest of the bones.  It's a very nice museum, with many volunteers stationed throughout, holding a skull, or maybe a small petri dish of micro fossils, ready to explain what they're holding and answer questions.  On one wall they have an array of some 400 skulls of dire wolves that have been discovered there, only a small sampling of the more than 1600 different varieties of this one species known to have once existed.  You can also view the extensive paleontology lab, where many individuals are working, in their white lab coats, sitting before microscopes or tables where they painstakingly dust, clean and inspect individual bones, etc.  Hard to imagine doing that tedious work day in and day out, but I'm really glad there are people who want to do it, for the benefit of all the rest of us!  One exhibit I really liked was a skeleton of a saber tooth tiger in a glass case where they were able to superimpose a holographic image of the fully fleshed out tiger, which would then fade away so you could see just the skeleton--remarkable way to graphically show what they have learned through research.

The Page Museum is also adjacent to the LA County Museum of Art, where they have a wonderful cafe, where we had lunch.  There are a number of buildings in this museum, with lots of open patio like space in between, where they have several experiential art installations, where crowds of visitors, including lots of children, were enjoying a beautiful Sunday afternoon.  Turns out that this was one of their Family Sundays, where they also had stations set up where kids could do their own small art projects, like copying an Egyptian hieroglyphic display, make a clay model of statues that were put into Egyptian tombs.  All of this was designed to supplement the current exhibition of Egyptian art in the actual museum.  John loved this, and, as the volunteer assistant was explaining the legend of the Eye of Horas from the hieroglyphic display, John wowed her with facts he knew about the legend which she didn't!  This museum has really hit the nail on the head with its marketing ideas and ideas to help young children develop an appreciation for art--the assistant was explaining to us how any child under 18 can become a member for free, and then is "allowed to bring one adult in for free anytime," plus on Family Sundays, the child can bring her or his whole family for free--what a great concept!

After the museum, we went back to Walt and Timo's apartment to pick up Sophie, where she'd been patiently waiting in her crate while we went to the museums, and then headed back to the campground, so John could go to the pool.  It's about an hour's drive from downtown to Anaheim, so it was a pretty full day.  At the pool John and Todd met a family who are from Maple Valley, a town right adjacent to Covington, the Seattle community where Todd, Karen and John live--what a small world!  And the night before, when we were on the shuttle from Disneyland back to the campground, we met another family who is from Kent, another adjacent Seattle community--remarkable coincidence.  So we made camping kabobs on the grill for dinner, and finished the evening with s'mores while we watched the nightly fireworks!  Just another day in paradise!! 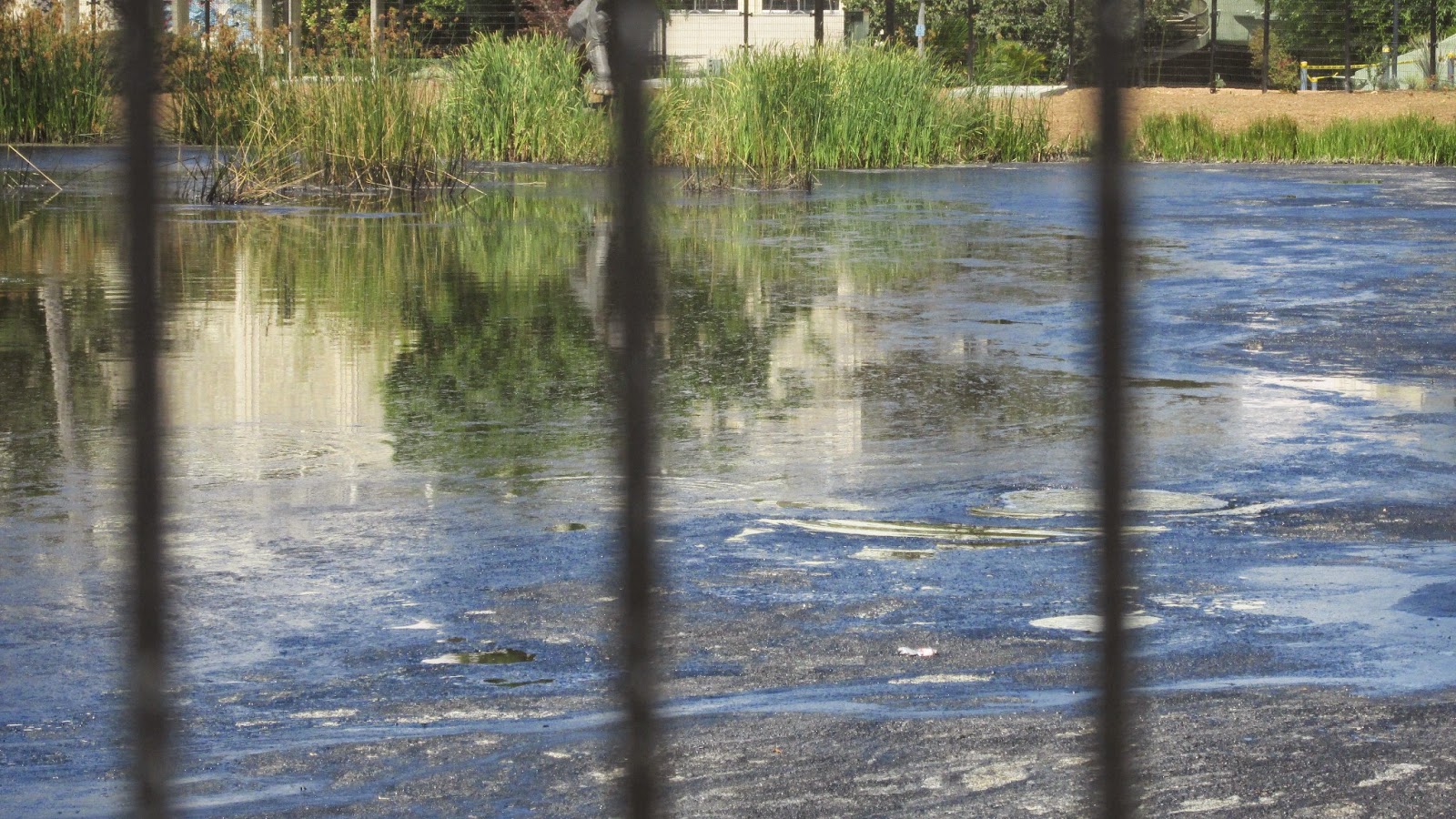 Mockup of a female mastodon stuck in the tar

John with a giant sloth 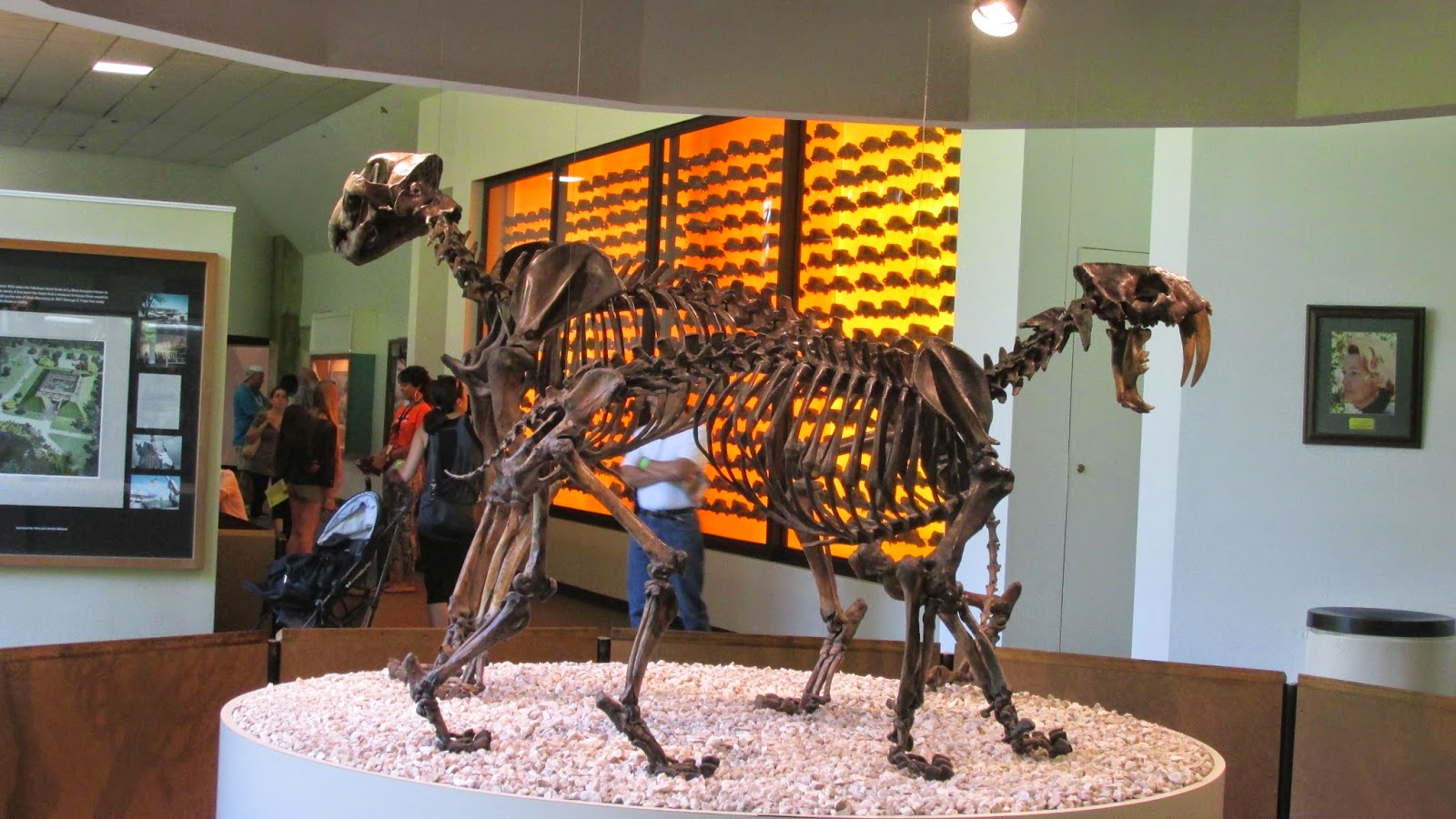 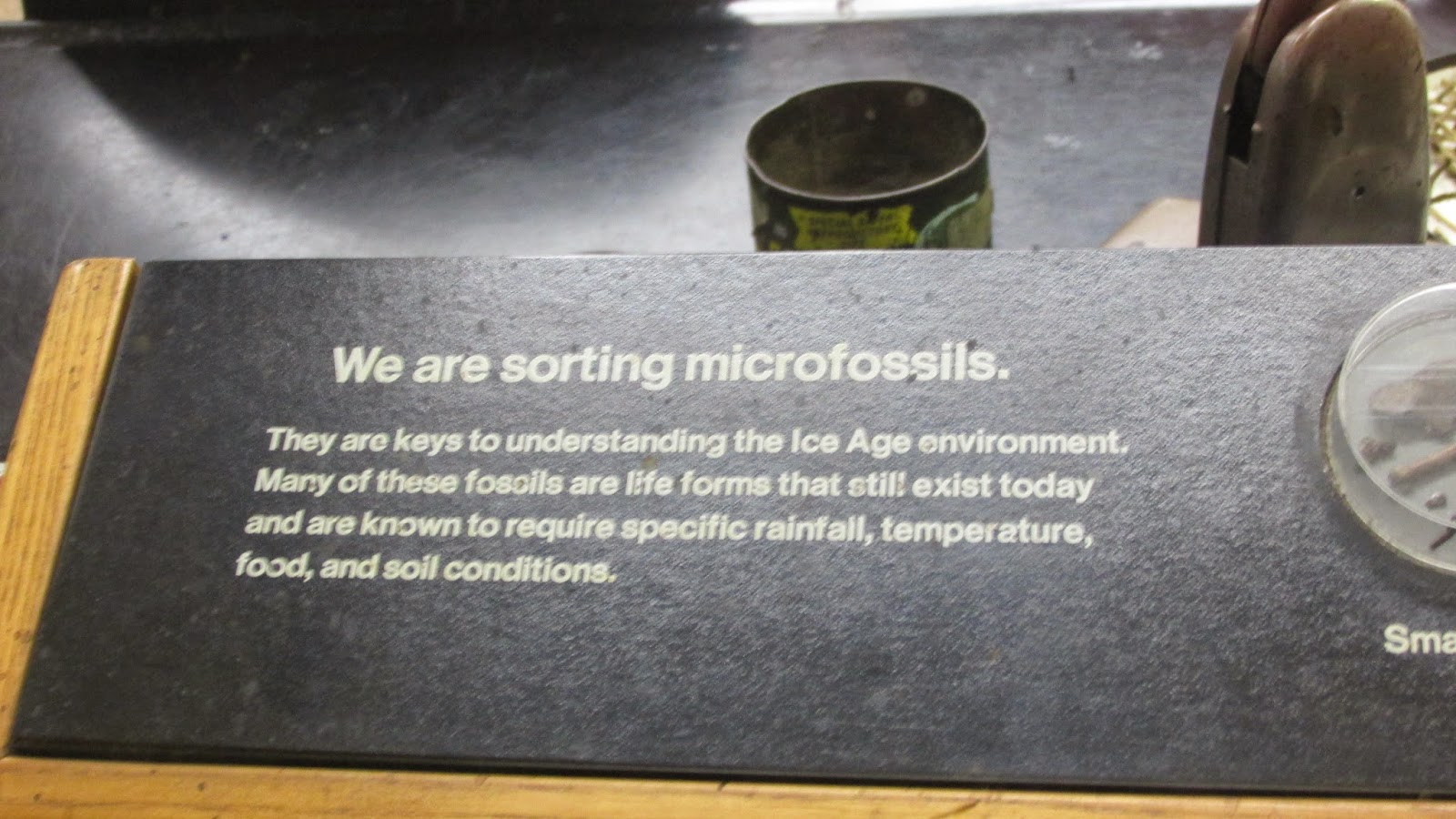 Trays and trays of fossils, waiting to be catalogued 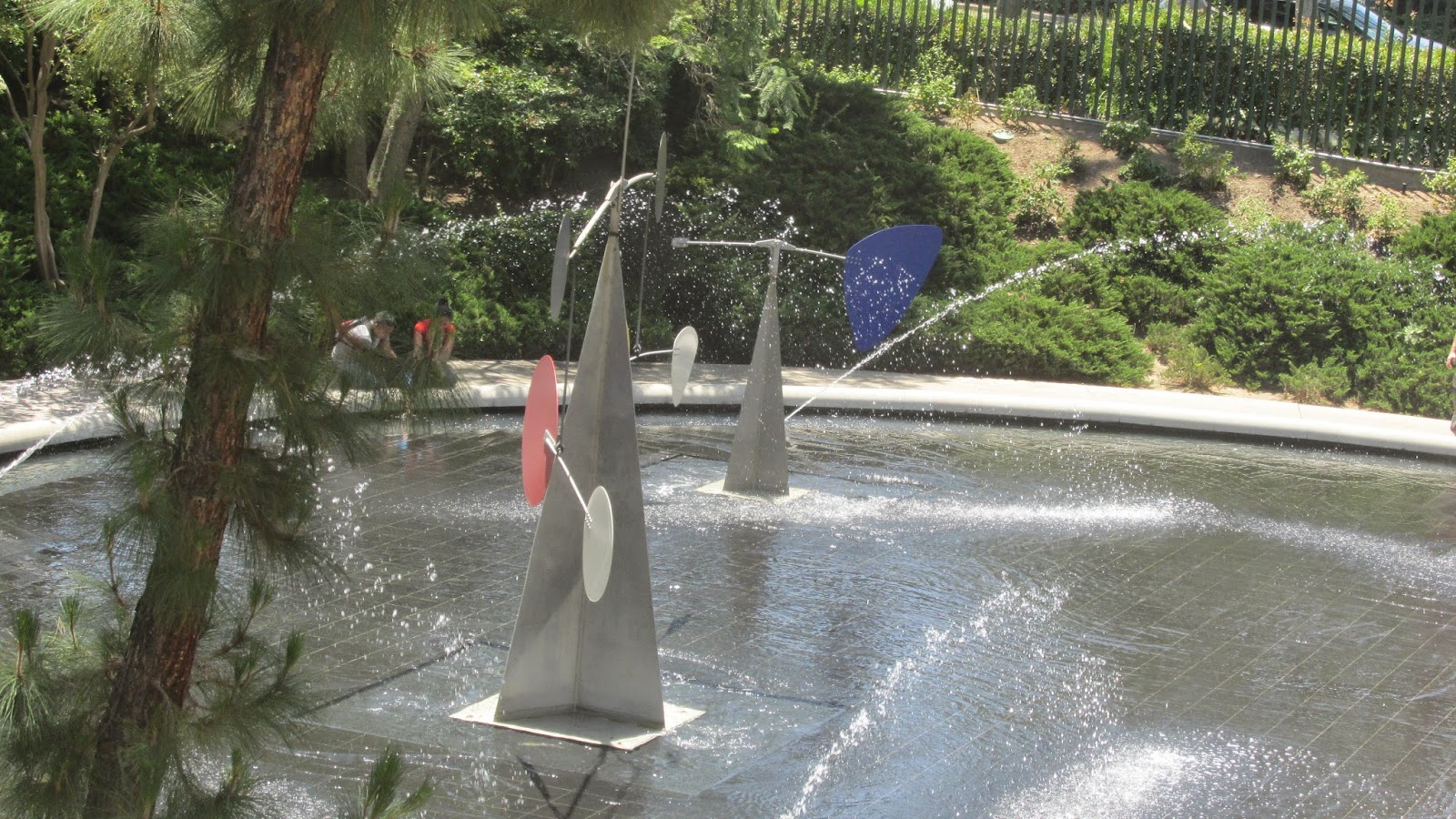 Huge boulder, suspended over a concrete walkway--a "conceptual art" installation on the Museum of Art grounds

Timo and Walt among the street lamps 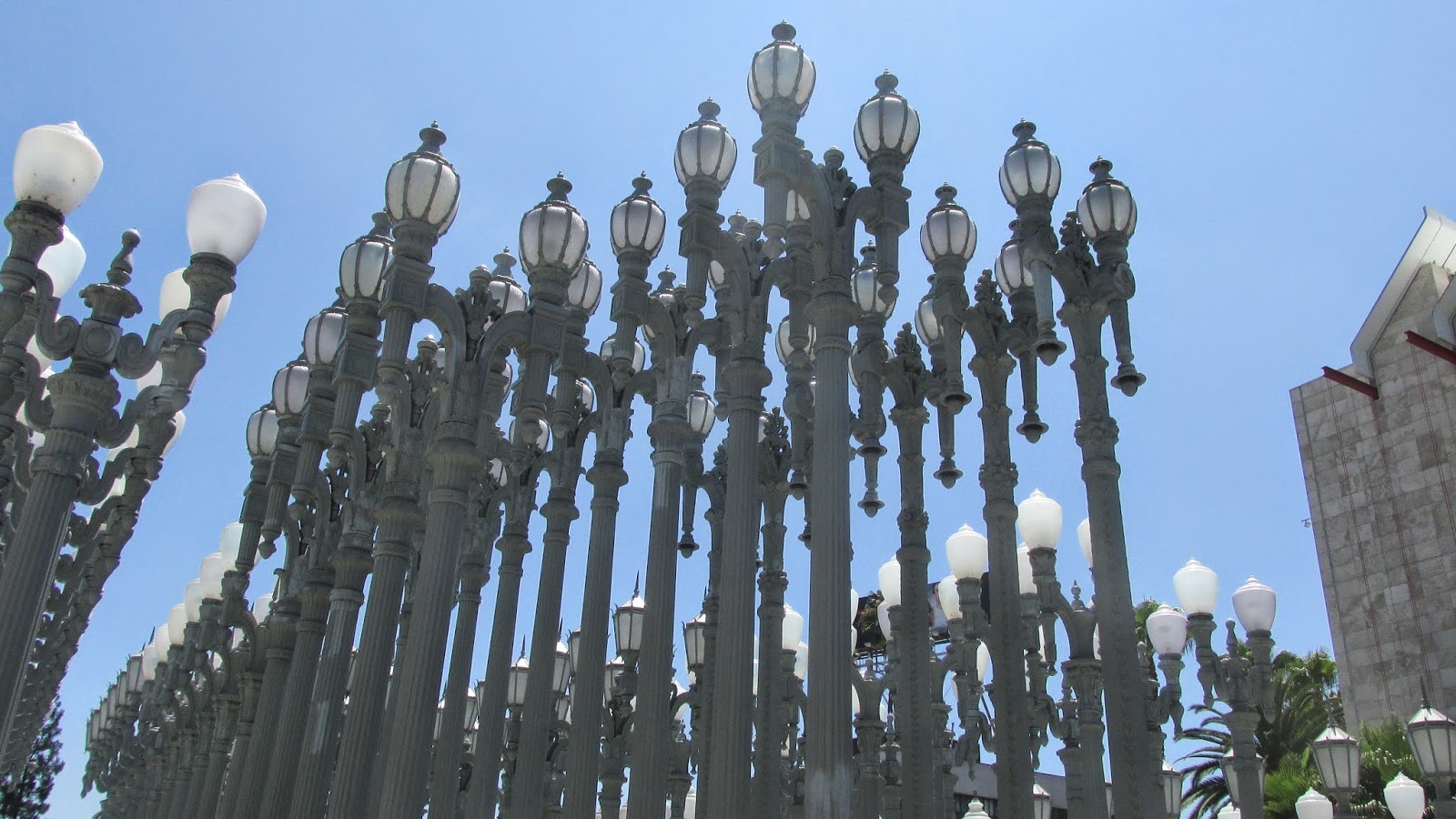 Bubbling tar/asphalt pool on the walk back to the car 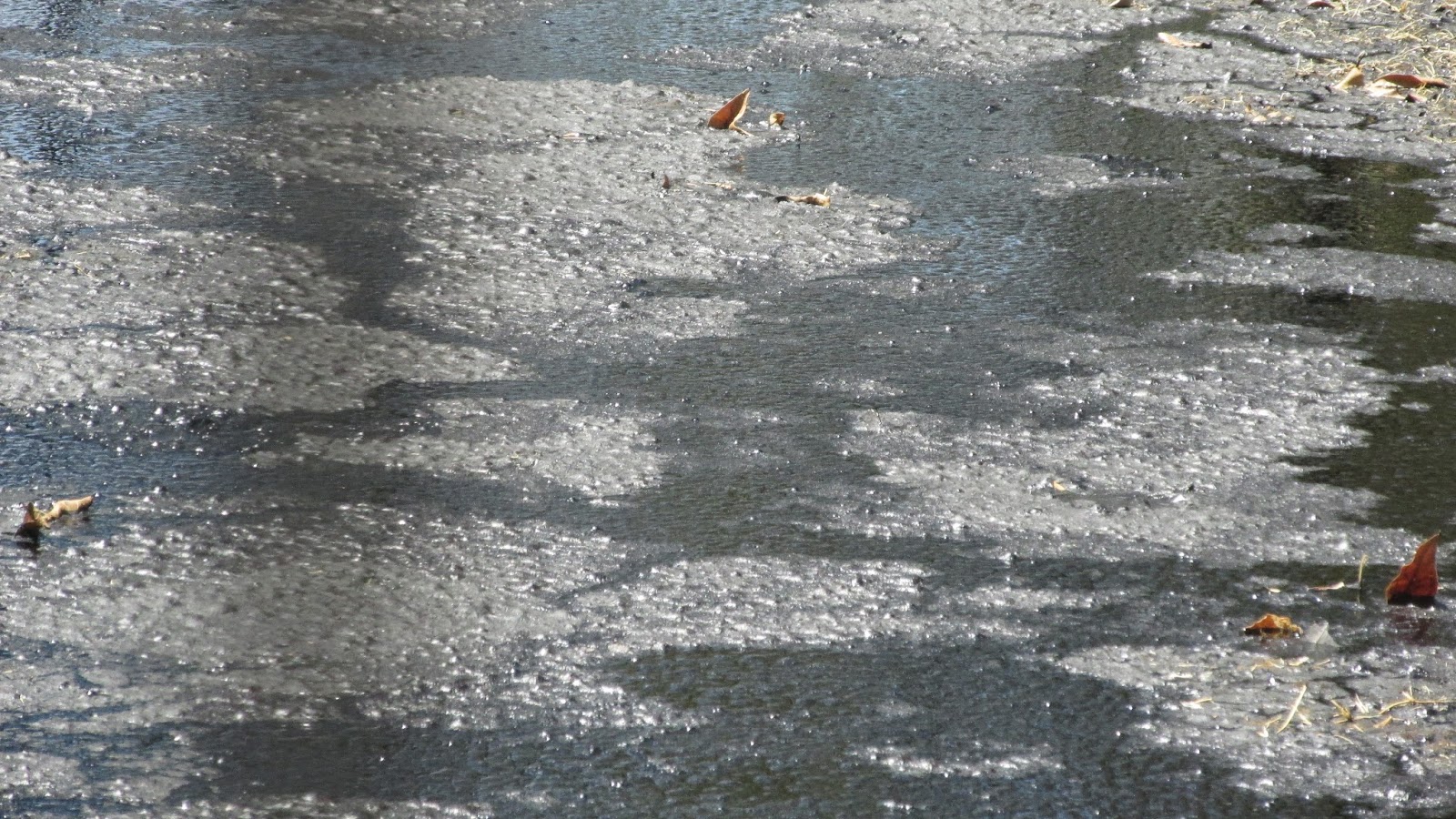 Had to be careful where you stepped!

John with his Eye of Horas hieroglyphic drawing

And the burial statue