As we pulled out of Gillette Thursday morning, we began to see more of the type of scenery we love so much in Wyoming, and our excitement level began to build, as we headed toward the Tetons.  Though we had talked about spending some time in Yellowstone, as we thought about it and the closer we got to Grand Teton National Park, we decided we would just go back there.  We first encountered the Tetons  when we came to Trail Creek Ranch, a dude ranch, or as they say in polite company, a guest ranch!  This was to celebrate our 25th anniversary, 22 years ago.  The ranch is in Wilson, just outside the National Park, but some of the horseback rides we did took us into part of the park, and we fell in love with the place, and, since we started RVing, we've come back every year.  It's one of our favorite national parks, so I think it's a good bet that we'll keep coming back.  One of the things we love about it are the wonderful paved bike paths that run alongside the roads, so you don't have to worry about being on the road with the motorized vehicles.  And we were happy to see as we drove into the park today (Friday) that they're expanding the trail even more--woohoo!  But wait--I'm getting ahead of myself, so let me back up a day.

Thursday, we had a lovely drive to Dubois, through the Wind River Canyon, bright sunshine and no rain!  But we sure saw plenty of evidence of the storms and heavy rains that had inundated this part of Wyoming recently--lots of farms had fences just about totally under water, and some buildings looked like they were just about to be flooded completely.  We talked to some locals at gas stops and at the campground where we stayed and they said this has been about the most rain by this time of year that anyone could remember.  Also, it's been warmer than usual, so the snowpack has melted faster than normal, too, which adds to the rivers and creeks overflowing their banks, which we certainly saw.  Anyway, we spent the night in Dubois, which is where Ring Lake Ranch is located.  We spent a week at Ring Lake last year at a retreat with Barbara Brown Taylor leading a study of her book Learning to Walk in the Dark, and what a week it was.  Anytime you can spend a week with this amazing woman is a good week, and added to that was the setting.  Ring Lake combines the traditional dude ranch experience with weeklong seminars and retreats with significant authors like Taylor, as well as other leaders from the spiritual realm like Roberta Bondi, our dear neighbor.  So we were excited to be back in Dubois, even though we didn't get to go out to the ranch this year.  The campground where we stayed is right in downtown Dubois, right on the banks of the Wind River, just a gorgeous setting.  Trisha was excited that they had an indoor pool, since she brought her water aerobics barbells, so she had a good workout while I spent some more wonderful extended time on the phone with Apple, trying to figure out what's going on with the Photos app on the computer.  On our way in, we passed by the Cowboy Cafe, a local landmark, and the Rustic Pine Tavern, where we enjoyed one of the weekly square dances last year--brought back some fun memories!  We would have liked to stay longer, but since we need to make it to Seattle in time for grandson John's last day of school, we needed to keep on trucking, so we knew we could only spend the one night.

So we left Dubois and made it into Grand Teton National Park Friday morning.  We went straight to Gros Vente campground, which is our favorite campground in the park.  Last year we had stayed in Coulter Bay, but a lot of the sites are a challenge to find a level spot.  Gros Vente is the largest campground in the park, and one of the work campers said they only fill up on the 4th of July.  Lots of good sites and it's close to the bike trail!  And near dusk, you can often see lots of wildlife--last year we saw a mama moose and her calf, lots of buffalo and some elk.  What's not to love!!  So we got all set up, met some wonderful folks from New Hampshire in the site next to ours, drove into Jackson to get one thing taken care of on the car, and Trisha visited a wonderful yarn shop where she found the special needles she needed for a new pattern she just found.  Although the store has moved to a new location since the last time we were here, it used to be on Pearl St., so it's aptly named Knit on Pearl--very apropos!  We also found a Whole Foods style grocery that somehow we had managed to miss on our earlier visits--it's actually called Jackson Whole Grocer--and loaded up on lots of wonderful locally grown kale, beets, brussels sprouts and other goodies.  We came back, took a nap and just spent the rest of the afternoon and evening sitting outside luxuriating in this crisp, cool Teton Mountain air, with the scent of sage wafting through the breezes, as there is sage bush all around and when you brush up against it, the aroma is just out of sight!   Roasted lots of those fresh veggies on the grill and enjoyed a wonderful supper, sitting outside among the sage, listening to the happy sounds of children playing and folks having fun in this glorious park!  Took a long walk around the campground with Sophie, so she got to meet some new four legged friends.  One of the more interesting things we learned was that the couple from New Hampshire had been to Alaska with another couple a few years ago, and they had a unique story to tell.  The other couple had been talking about getting married when they returned from their trip, but the more time they spent in Alaska, they said, why not just get married here.  But they couldn't find a minister to do the wedding since it was salmon fishing season, so they went to the courthouse and learned that they could pay a small fee and get a special appointment of someone as a "marriage commissioner" to do the ceremony.  Since the woman we met today is a Justice of the Peace in New Hampshire, they asked her if she would do it and she agreed.  So they came back to the campground where they were staying and told the manager of their plans and he said "you need to have it here."  Word spread around the campground and before you knew it, one of the campers who was a florist had everyone gathering wild flowers and she made a bouquet and braided flowers into the bride's hair; another camper was a baker so she made a wedding cake; another camper was a musician, and in a couple of days they had an incredible ceremony, with the whole campground participating--really fascinating!  The newlyweds were so taken with Alaska that they moved there and now run an inn on the road to Valdez--so took a picture of our new neighbors and will try to look up their friends when we're in Alaska--how random is that??!!  And, as we were talking about national parks and mentioned that Acadia in Maine is another of our favorites, the man told us he was born and raised in Bar Harbor, and said that the next time we're back, his brother, who has just retired as a lobster fisherman, would set us up to go out for a day on a lobster boat--how cool!

In Gillette Thursday morning, as I was unhooking at the campground, I looked across the field and saw this pronghorn 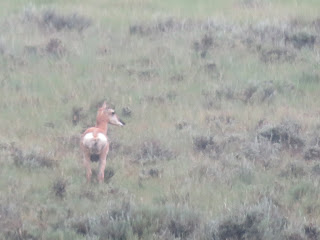 Beginning to see buttes and mesas--just love it!

We stopped for lunch in Thermopilis, home of a hot springs, and found a nice city park where we stopped to eat.  There was a big open grassy area, so Sophie was so excited to be able to be off leash and she chased the tennis ball I threw for a good 20 minutes before she came back to me, panting, saying "Dad, you look like you could use some Gatorade!"  Before we went back to the RV for lunch, I saw this house across the park and thought their yard decoration of an old covered wagon was neat.

Now beginning to see the varied striations of different rock formation, layered over millions of years--they have signs along the highway identifying the period of different formations, really interesting

Just love driving through the valleys, with the mountains rising all around you--like you're just being lovingly embraced by Mother Nature's arms

Here are our first sightings of red rocks--woohoo!

I know a lot of these scenes may seem duplicative, but each year when we're in this beautiful part of the country it just takes our breath away, so we end up snapping pic after pic after pic

And, as any of you who have been reading this blog know, we can never pass up a quaint little church without taking a picture!

Oh no, is that more rain up ahead??  Whew, it blew over and passed us by!

Hooray, our first sightings of the snow capped peaks up ahead!

As I've said many times in the blog, there's no way these pictures can capture even a small percentage of the overwhelming beauty of the landscape, but just expand this in your mind to "the red power," as one of our daughter's high school teachers liked to say--it's just beyond beautiful in its massiveness and grandeur; the different shades of green, the shadows playing across the hills, and the snow-covered mountains-just wow! 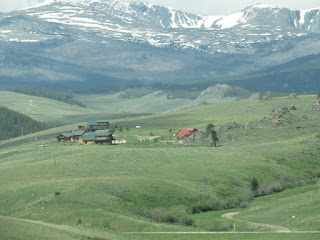 Just love the red rocks in the west!

The varying colors just present the most amazing effects--every time we round a bend or come through a pass, it just seems like there's something completely new, even though these same mountains have been here for quite a while

Look at that hoodoo!

I also love these entrances to ranches, with the big log over the top

And, we're seeing the Tetons!

Now we're in the park and here is our first sighting of a buffalo herd.

This little cloud just above the peak makes it look like a volcano!

In the campground, Sophie heading our for a walk in search of some new friends

And here she is with Macy, from South Carolina.

And Molly, from California

Someone had this beautifully restored Morris Minor parked near the amphitheater where the Rangers conduct their nature programs.