In addition to having the chance to spend a lot of time with Shelley and Ken and enjoy all of the wonderful things Aspen has to offer, one of our main reasons for coming here was to train for our September pilgrimage on the El Camino in Spain.  Since the town's elevation is just under 8000 ft., we figured that a month of hiking at this altitude would be great preparation, but we also knew that it takes several days to adjust to such a change from what we're used to at home, breathing is harder at first, along with some lightheadedness on exertion.  So on Tuesday, for our first hike, Shelley suggested we go up Smuggler Mountain, which has some fairly good elevation gain, but less steep than the Ute Trail, which is Ken's and her favorite training trail.  It was a lovely sunshine filled day, but we got a later start that was ideal, ending up hiking in the middle of what turned out to be a pretty hot day for Aspen.  The heat, coupled with the abrupt change in altitude for us, made it somewhat challenging, but we had a great time.  Lots of folks out on the hike, which is primarily along a road, including a lot of mountain bikers.  It was a great way to start our time here in Aspen!

Aspen is such a wonderful place to be in the summer with so many outdoor activities:  tons of hiking trails, mountain biking trails, rails to trails biking paths, rafting, kayaking, paddle boarding, you name it.  Everywhere you go you see just so many people out doing all these things and it's really inspiring.    I was eager to get out on the bike, too, so later that afternoon I took a ride along the East of Aspen trail, which is right across the road from their house.  It's a great trail, used by hikers and bikers alike, that leads out of town, winding its way through a nature preserve, past meadows and through groves of aspens, with lots of views of the mountain along the way.  It ends in Difficult Campground, I rode through the campground and back to town a couple of times and had a great ride.  I could still tell that  the altitude was having an effect on my lung capacity, but was really glad to get out on the bike.  In 2013 when we first started RVing, we initially had 7 speed bikes, which were okay for the campgrounds and relatively flat  terrain in the southeast.  Once we got out west and into the mountains--especially our first attempt to climb the mountain in Zion National Park--we realized we needed to upgrade, so once we go to Aspen we found a bike shop that was willing to let us trade in out first bikes to something more compatible with the environment.  We've really enjoyed these bikes ever since!

Another wonderful thing here in the summer is the Aspen Ideas Festival, a series where they bring in speakers, panels, plays, films, and other presentation on an incredibly wide range of current topics.  They have a lot of really big name folks, from political figures, elected officials, journalists, authors, experts on a variety of topics, etc. for over a week of stimulating presentations and discussions.  While there are a number of events you need a pass for--which is quite pricey--there are also a number of public events which are quite reasonable.  Tuesday evening Trisha and Shelley went to a one woman play about the role of poverty and racism in education, which they found provocative and heart rending, and Ken and I went to a panel discussion of national journalists and pollsters on the 2016 presidential election.  It was fascinating and I thoroughly enjoyed it.  We got here for the last several days of the Ideas Festival, so we were really looking forward to attending more of these events--just a great way to spend the day exercising our bodies and the evening exercising our minds!

At the lookout atop Smuggler Mountain 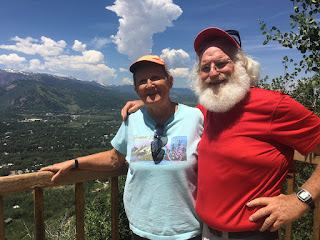 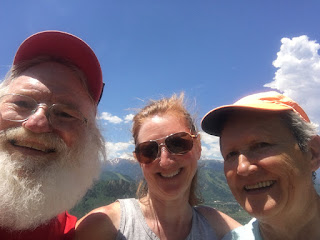 A rest at the top, on the observation deck 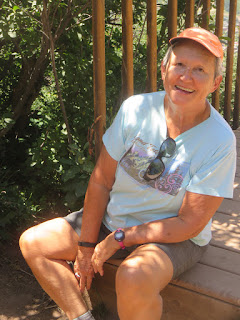 Looking down on Aspen from the summit 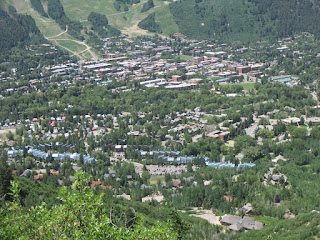 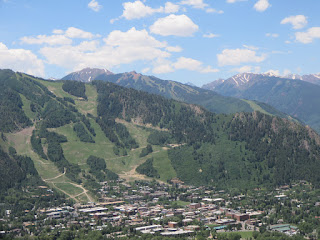 Looking off toward Buttermilk Ski Area, and you can see the still-not-melted half pipe in the distance 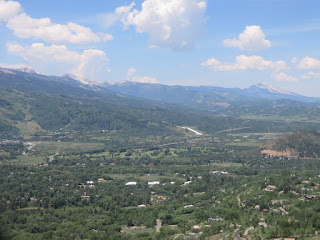 Zooming in on the half pipe. 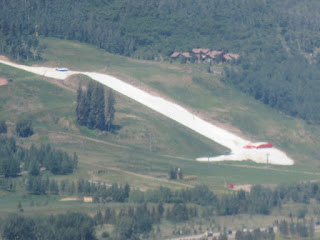 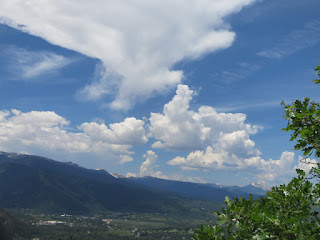 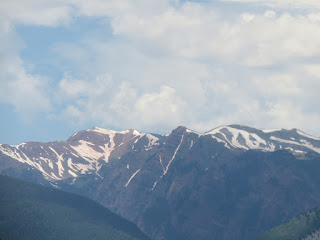 Shelley's and Ken's dog, Davi, who loves to go on hikes, finding a bit of shade on the way back down. 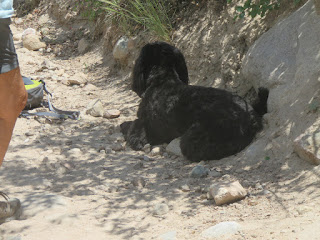 On my bike ride along the East of Aspen Trail 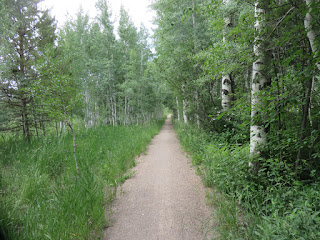 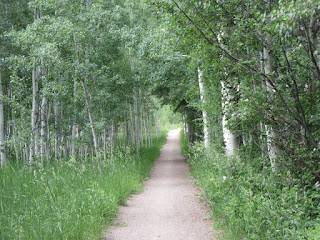 Roaring Fork River, from a bridge along the trail. 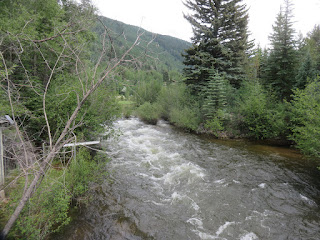