Last Friday I got up early and did the Ute Trail, and it was a great hike.  I had done it the day before, but started later in the morning, and it always gets more crowded as the day goes on.  Starting early as I did on Friday was wonderful--only saw 3 other people going up; coming back down, the closer I got to the trailhead, the more folks I saw.  But it was a super hike!

Later that morning, Trisha and I rode our bikes down the Rio Grande Trail to Woody Creek, about a 10 mile ride.  The Rio Grande Trail is a lovely biking/hiking trail coming out of downtown Aspen and goes all the way to Glenwood Springs, 42 miles away.  It's a rails to trails project, following the old right of way of the Denver & Rio Grande Western Railroad.  It follows alongside the Roaring Fork River, in some places rising high above the river along a ridge line.  Most of it is paved, though there are some  gravel sections, but these are well maintained and the surface is fine.  It was a beautiful day, lots of sunshine--though the temperature was not as high as back home, the fact that you're at such a higher altitude makes the sun a good deal warmer, and we, at least, feel like it's a lot hotter than it is.  Anyway, earlier in the morning Ken left for a grueling ride up to Maroon Bells--a 1600 ft. climb up 11.5 miles, before having a speedy ride back down--way beyond my pay grade on the bike, for sure!  While he was riding, Shelley did the Ute Trail, and once she was at the top she called us to let us know she was starting back down, so we could start our ride.

Our destination was the Woody Creek Tavern, the iconic bar that was the favorite hangout for Hunter S. Thompson, gonzo journalist, who had a ranch nearby.  It's become something of a tradition during the summer months for folks to bike from Aspen down to the tavern for lunch, so we knew when we got here that this was on our list!  We timed our departure time so Shelley and Ken could drive down to meet us for lunch and we would all arrive close to the same time.  The place is always packed during the summer and we knew there could be a long wait.  Out front there are rows and rows of bike racks and the vast majority of folks had arrived by bike.  We didn't have to wait too long, though, and Shelley and Ken joined us soon after we got our table.  Lots of memorabilia from the days Thompson haunted the place, as well as tons of pictures of just ordinary folks tacked to every available square inch of wall space, and on the support columns throughout the bar, just commemorating folks' visits to the tavern.  The wait staff is constantly on the go, very high energy place with music and laughter all around.  And, they now have several vegan/vegetarian options on the menu, so it was great!  After lunch Trisha decided to pack her bike into the back of their car and rode back with Shelley and Ken.  I rode my bike back, but the fact that it's pretty much uphill all the way back, coupled with just having devoured a big black bean burrito, meant for some huffing and puffing on the return trip!

Thompson died some 5 years ago, but Ken related a hilarious experience of a visit he made to the Tavern before Thompson died.  It was in the less crowded off season, so when Ken arrived there were not too many folks there.  He took a seat at a table, only to be informed by Thompson when he arrived that this was HIS table and Ken was sitting in HIS chair, and it became quickly clear to Ken that he was expected to move--funny story!!

That evening I drove to the Denver airport, where I caught a plane back to Atlanta for the memorial service for our dear friend, Carl Hendrickson, a retired Episcopal priest who was in our church for many years.  Carl was also a stalwart member of my men's group that meets every week at the Bumble Bee Cafe in Blue Ridge, where we're affectionately known as the Bumble Bee Boys.  Even though it was a whirlwind trip--I caught a midnight flight, which turned out to be an hour late, then drove to Cherry Log, showered and went to the service; then home for a nap and drove to Atlanta, spent the night at Shelley's and Ken's house and caught an early flight back to Denver Sunday morning--I was very glad I could be there for the service.  The Bumble Bee Boys were all there, some of us singing in the choir and others participating in other ways in the service.  Carl was a brilliant man, a very profound theological thinker and just a funny, funny guy.  He had survived a heart scare some years ago, but this time pancreatic cancer was too much to overcome.  He will be deeply missed by many, and our thoughts and prayers are with his widow, Peggy, and all the family.

I got back to Aspen in time to join Trisha, Shelley, Ken and the doggies for a wonderful concert at the Music Tent.  The family that donated the money to build the tent had a stipulation that there be open lawn space around the tent for folks to come spread out their picnics, blankets and chairs, to be able to enjoy the concerts for free.  The walls of the huge tent have panels that open so, while you can't see down to the stage as well as when you're sitting inside, you can still hear and it's just a wonderful tradition.  And you can bring your four legged friends as well!!  What's not to love??  There was an amazing violinist performing with the orchestra, and it was a very relaxing and enjoyable afternoon.


Riding on the Rio Grande Trail, high above the Roaring Fork River 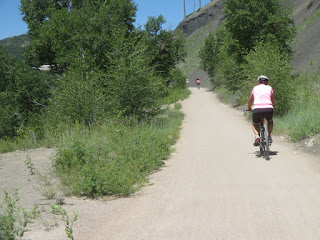 Looking down on the river 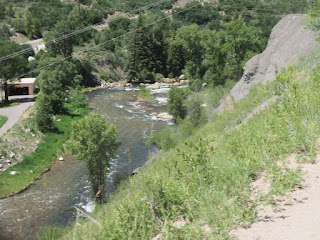 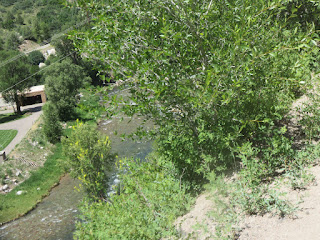 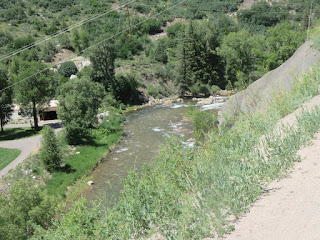 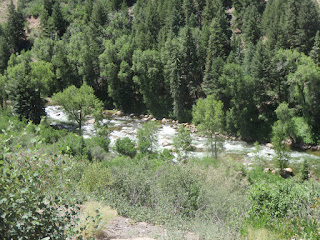 Gorgeous vistas along the trail 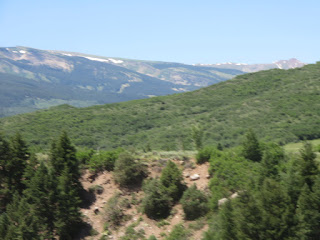 at the Woody Creek Tavern 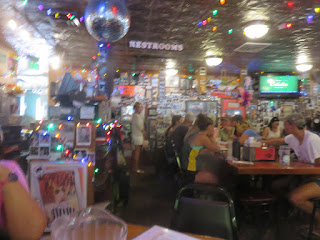 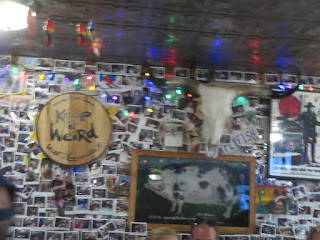 Hunter S. Thompson's pictures are all over the walls 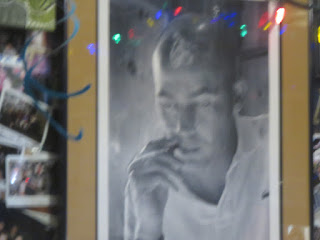 His table; the second guy from the left is sitting in his chair. 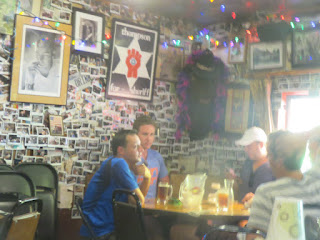 Enjoying the Sunday afternoon concert--Sophie liked it too!! 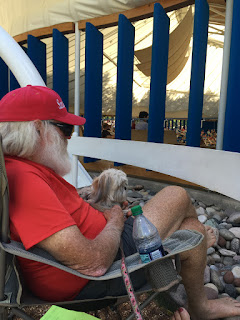 Shelley is stretched out on the blanket, with Davi beside her, though he's hidden from view in this pic 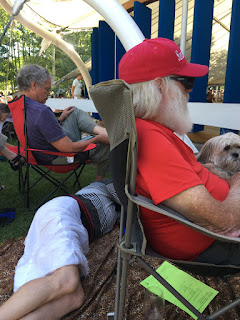 Barefoot in the park--what a wonderfully relaxing way to enjoy some incredible music! 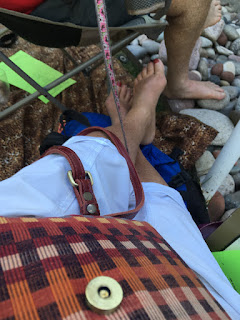 Here you can see these rotating panels and down to the stage.