Today we visited Bellingrath Gardens, in Theodore, AL, between Dauphin Island and Mobile.  We had seen the brochures, and yesterday when we were visiting the Estuarium they had some video clips from the Gardens, so we really wanted to see it.  It was so beautiful!  Walter Bellingrath was one of the first franchise Coca Cola bottlers and he obviously did quite well.  He started with a fish camp his doctor suggested he buy, to "learn how to play," since he was quite the workaholic, in the early 1900's. He and his wife took a trip to Europe and she fell in love with the gardens of England and the Continent, so she came back and worked with an architect to design extensive gardens on the fish camp land.  Took 5 years to do, and then they built this 10,500 sq. ft. house, all on the banks of the Fowl River.  It has been spectacularly maintained and we thoroughly enjoyed touring the home, the gardens, and a boat cruise on the river.

Since the gardens are on the road to Bayou la Batre, we decided to go on there to find a spot for lunch, as we had seen in the video at the Estuarium yesterday a clip about how much commercial fishing is done there and supplied all over the country.  We just drove into town, but mostly what we saw were places that sold seafood to take with you, but no restaurants.  We passed this little place called Von's Market, Restaurant and Cafe and decided on a lark to try it.  Well what an incredible surprise!  It didn't look like much on the outside or when we sat down, but they had gumbo advertised on the specials board so we gave that a try.  Wow, was it fantastic!  Even though we've been eating mostly vegan on the trip, we have been having seafood from time to time, and have been sampling gumbo along our way.  This was by far the best we've had.  Turns out that this place has only been open since last August, and interestingly advertises itself as featuring southern seafood and Asian cuisine.  It's owned by a young man, who uses his family recipe for the gumbo, and his Asian wife, who cooks Asian dishes.  We met them both and he proudly showed us the row of plaques and awards he's received for his desserts, which we didn't try, but his gumbo will clearly win the next contest.  They were both so nice and it was a real find.  So, if you're ever in Bayou la Batre, AL, we highly recommend this place, and tell Paul and Von Santa sent you!

Here are some pics from the lovely Gardens:  some of the gorgeous lilies 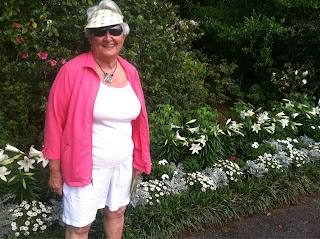 Some of the biggest hydrangeas we've ever seen, with tons of fucia behind. 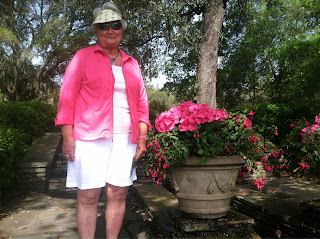 Scene along the Fowl River, some of the rather large houses that have been built near the Gardens. 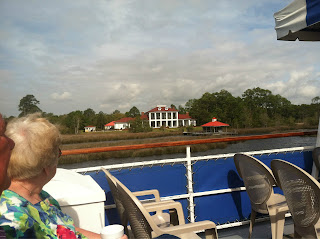 One of the osprey nests the Gardens management has installed to replenish the stock; hard to see but the mother was in the nest on the platform atop the pole, and dad was standing guard on a nearby tree.  Learned that ospreys mate for life, but for the first year, in the words of the guide they just "play house" before they get serious about producing offspring. 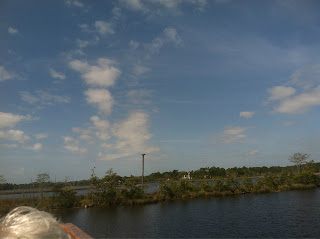 Seagull perched on top of the canopy on the boat, peering down at us on deck. 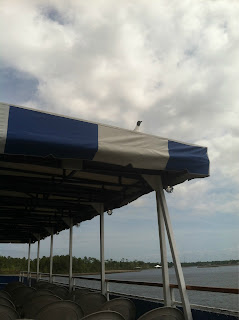 Waterfront steps leading from the dock to the house. 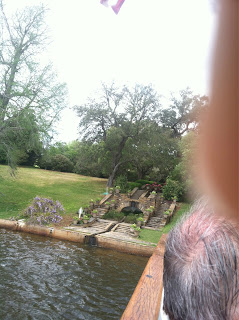 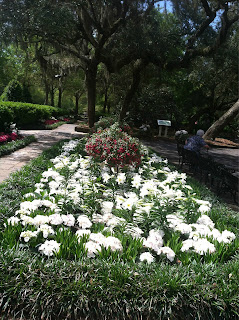 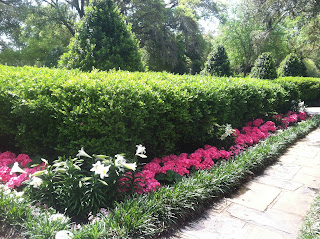 One of several interior courtyards. 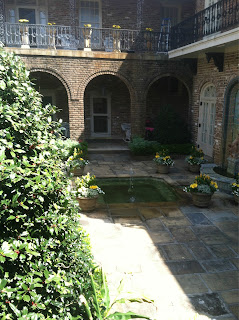 Pic didn't really turn out to show how, on the downspout, there is a B and 35, Bellingrath, and the year the house was completed, 1935. 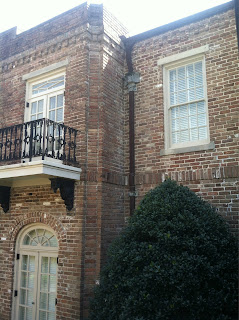 Boardwalk around Mirror Lake, now a showplace for the ecosystems, fish and fowl in the estuary. 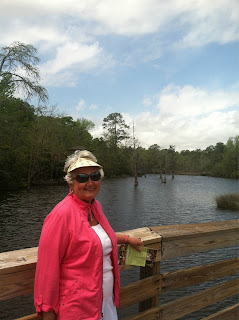 Beautiful iris among the grasses 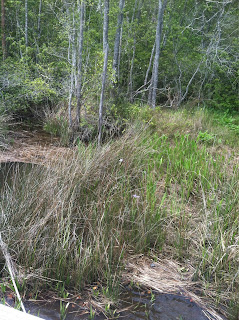 One of several varieties of camellias in the Gardens--don't worry, we didn't pick this blossom, it was lying on the ground in the path, so we just picked it up for the picture and put it back for others to enjoy later. 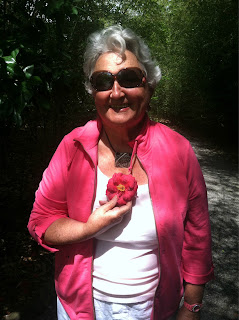 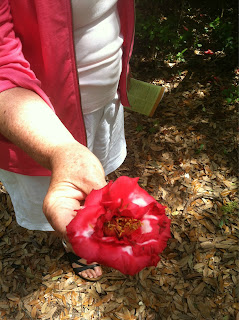 Trisha and her namesake! 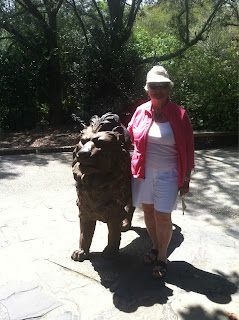 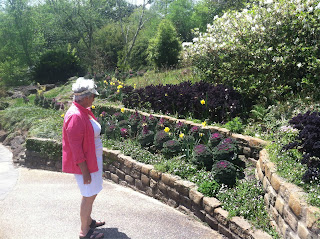 Window in the small chapel on the grounds 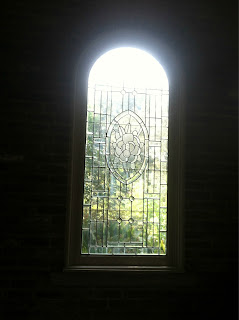 Altar in the chapel--it will seat about 30 people for weddings, etc. 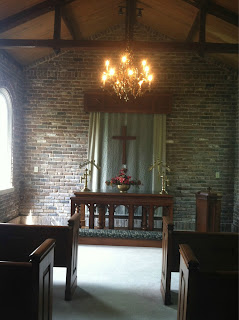 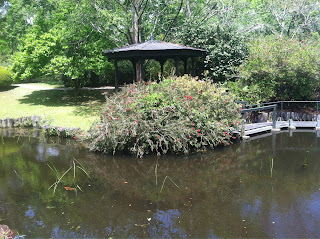 Koi in the small Asian pond 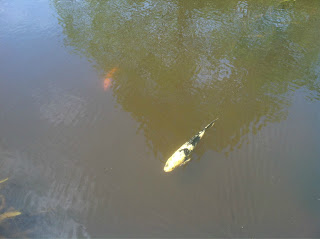 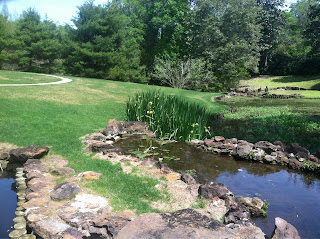 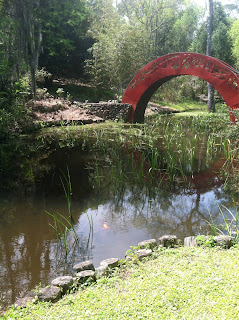 Unfortunately we were too early to see the roses in bloom, but as we walked through the rose garden, we could see the signs describing scores of different varieties--it will be spectacular in another month!  We saw pictures of the brilliant mums displays in the fall.  This place is obviously brilliantly beautiful, different from season to season.  Their website lists what's in bloom at any given time.  We asked the staff if they have many weddings there, and they of course said yes, and they stay booked a year or so in advance--there are so many lovely sites with lots of expansive lawn space for set up of tents, etc.