. . . for Trisha to become the impromptu chaplain of the campground!  Yesterday, here at Dauphin Island Campground, we were doing some laundry at the camp laundromat and met this lovely couple from Michigan.  Just like with everyone we've met thus far, we were asking them about places to see and visit in their home state--compiling quite a list by the way. Well, not surprisingly (since this happens so frequently) all of a sudden they were telling Trisha about having lost a daughter recently after a life filled with tragedy and struggles.  After Trisha talked to them a while in response, the woman asked "What do you do, Trisha?"  When Trisha told her she was a minister, the woman said "I just knew, somehow."  So there was Trisha, doing pastoral care in the campground!  It's amazing to me how often this happens--it's as if she has this signboard, visible to those who need to see it, that says "Come tell me your worries and I'll help you feel better."  She can be in the store, sitting in the park, anywhere, and it's happened time and time again--hew whole being is just so comforting and reassuring to folks and invariably, just like these folks yesterday, they leave feeling better.  Without even saying it, she reminds each person she meets that they are a precious child of God, and prays blessings upon them.  I just love to see it!  She is truly amazing!

Earlier yesterday we took our morning walk through the bird sanctuary, and found our quiet bench at the Gulf observation point for our own private worship service.  We sang "This is the Day That the Lord Hath Made" and "Surely The Presence of the Lord is in This Place,"  accompanied by the melodious sounds of many beautiful birds singing along--otherwise completely quiet, while we had our meditation, including poetry by Rilke, prayers from cultures around the world, and just some quiet time of reflection looking at the water, the dunes, the unbelievably blue sky, and just thinking about how blessed we are in so many ways.

We talked to our son, Jeremy, who is teaching English in Cambodia, to celebrate his 30th birthday--had to wait until campground quiet hours ended at 7:00 AM, since we knew there would be much excitement and laughter as is usually the case when we talk.  It was 8:00 PM his time--he's literally half way around the world--but he had had a good birthday celebration the night before with a group of friends from about 7 different countries, and he told us about his recent trip to see the temples of Angor Wat--this is the enormous temple you see so often in pictures of Cambodia--but he said there were so many other temples that were at least as beautiful and interesting that he also got to see.  It's so exciting to see him explore new places--where ever he has been around the world, he does his best to get off the beaten path and explore what that country has to offer.  What an amazing life he's living--by the time he turned 30 he has lived and worked on 5 of the world's seven continents!

The campground is decidedly more empty now--many of the surrounding counties had their spring break last week, so when we arrived on Friday the place was packed with kids, and jumping with laughter and the excited sounds of kids and families having fun.  Saturday when we stopped in the campstore to rent bikes, the camp manager told us that several kids had been in to excitedly to tell her that Santa and Mrs. Claus were here on vacation!  So I've had fun visiting with kids, letting them have pictures with Santa, and giving out lots of signed pics to grandparents to surprise little ones when they get home.  When we were in Pensacola Beach, as we were walking down the street one day, a woman came up and said her husband had taken a picture of her daughter and me the day before on the beach, and that all afternoon she had been singing "Here Comes Santa Claus!"  So much fun to help people smile!

We've rented bikes to ride around the island and it's been so much fun!  They have these wonderful, wide paved bike/walking paths along the road so you don't have to be in the roadway with cars and it's really nice.  We can't wait until tomorrow when the bike store opens so we can go buy bikes to take with us!  While it's so flat here and easy to ride, the rental bikes are these old time single speed heavy beach bikes, so it will be good to get some light weight, multispeed bikes for when we hit places out west with a few more hills!  But it's great to bike to the store to get groceries and just see the sights.

Yesterday afternoon we visited the Estuarium, which is a wonderful museum maintained by the Dauphin Island Sea Lab and Auburn University's marine sciences program.  Learned a lot about the area, the things they've been able to do to help restore/preserve the ecosystem here--learned that the Mobile Bay area often competes with Seattle for who gets the most rain each year, and that Dauphin Island is the first major stop for thousands of birds on their way back north during the spring migration. Tons of birders around, with incredible long lens cameras--we've noticed in particular a local cemetery where there have been a number of groups with cameras taking pictures of a particular bush--the camp manager told us it's because this bush attracts some unusual species this time of year, so we hope to go see them later today.

Well, Trisha is sitting across from me here in our cozy carouse, looking at websites for pet adoptions, hoping to find a Havanese to join our family.  So far we've seen some cute pictures, but none very near where we are--one in Seattle, but it surely will be adopted before we make it out there, and Trisha doesn't want to wait that long anyway!  So we're debating whether to get a puppy, and hopefully being able to train it for the RV.  Trisha said it's also mandatory when we go get our bikes that hers have a basket suitable for carrying a little dog!  Hope we can find one soon, but I'm convinced that when the one we're supposed to get makes its appearance, the circumstances will align just right.

Hope the weather holds out for the next couple of days--it's been glorious since we've arrived on Dauphin Island.  Plan to go to Bellingrath Gardens today if the weather is nice.  Since the ferry from Ft. Morgan was not taking RV's when we left Gulf Shores, we're hoping to take our bikes across to ride around Ft. Morgan tomorrow or Wednesday, before heading farther west into Mississippi.  Already we've gotten contact info on some folks we've met along the MS Gulf coast, plus some friends and relatives of our friend from Atlanta who want to show us the sights when we hit the area, so that will be fun.

So here are some pics from yesterday, at the site of our worship service: 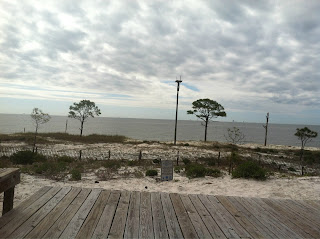 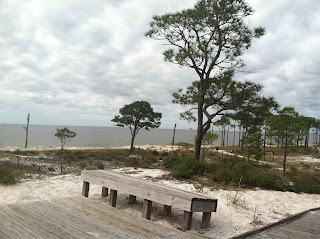 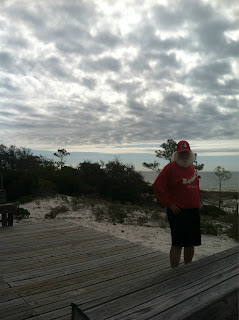